Cruising down the road one day last week, I was minding my own business, and there it was – a strikingly beautiful 1956 Oldsmobile Super 88 decked out in lipstick red and snow white. What was I to do? I couldn’t just drive on by without stopping, so I took a hard left to pay my respects to one of my favorite Oldsmobiles.

Now don’t get me wrong, I like the 1955 Oldsmobiles as well, but this is one where, in my opinion, the second of a two-year run had subtle refinements in styling over the preceding year.

Pulling into the lot where the ‘56 Olds sat on a trailer, I saw three men standing next to the car. As I approached, one of them called out, “Hello FIN MAN!”. At first, I didn’t recognize Phil Carrico, whom I had done a story about his 1932 Chevrolet Confederate Coupe in August of last year. Phil is the one who found the Olds for sale in St. Charles and took his friend Randy Gower out to look at it last February. When former owner, Mike Klecz, took the tarp off the stunning red and white Olds, Randy said, “I’ll take it!”

You’re likely to see a number of ‘57 Chevys at local shows and cruises, but it is rare to see a 1956 Oldsmobile – and that is but one thing that makes this car so appealing.

In the old car hobby, popularity equals price. At the top of the list are the convertibles, sometimes double the price of the next highest in popularity, the 2-door ‘hardtops’ (or pillar-less coupes). Next down the line are the 4-door ‘hard-tops’ (sans post), followed by the 2-door sedans (posts), 4-door sedans (posts) and finally the station wagons (of which there are certain exceptions).

Today pillar-less ‘hardtops’ are, for all practical purposes, a thing of the past. We’ve all become accustomed to the four-door sedans which the manufacturers have softened the stigma by using the term “Sport Sedans.” We’ve become so used to the style that hardly anyone even thinks twice about the subject. But, after all, when you reach a certain age, climbing in and out of the back seat of a 2-door car becomes increasingly difficult. So, what we have in this Olds is a strikingly handsome, flashy car that is cheaper to buy than the same model in two-door form, but provides much easier entry and egress when you want to take the neighbor couple out for a nice steak dinner – and there’s nothing wrong with that!

The CV-19 pandemic has wreaked havoc on Randy’s plans to get the Olds back on the road, but he still hopes to have it road-worthy before the year is out. I, for one, hope to see it in tiptop shape at a local show or cruise for the 2021 season! Best of luck Randy, we hope to see it all put together in the near future.

And finally, I want to give a shout out to Randy Gower II, Randy the first’s son, who was a huge help in getting this Olds put together. The two Randys have worked hand-in-hand through the years as they each pursue their own goals in special interest cars and trucks. 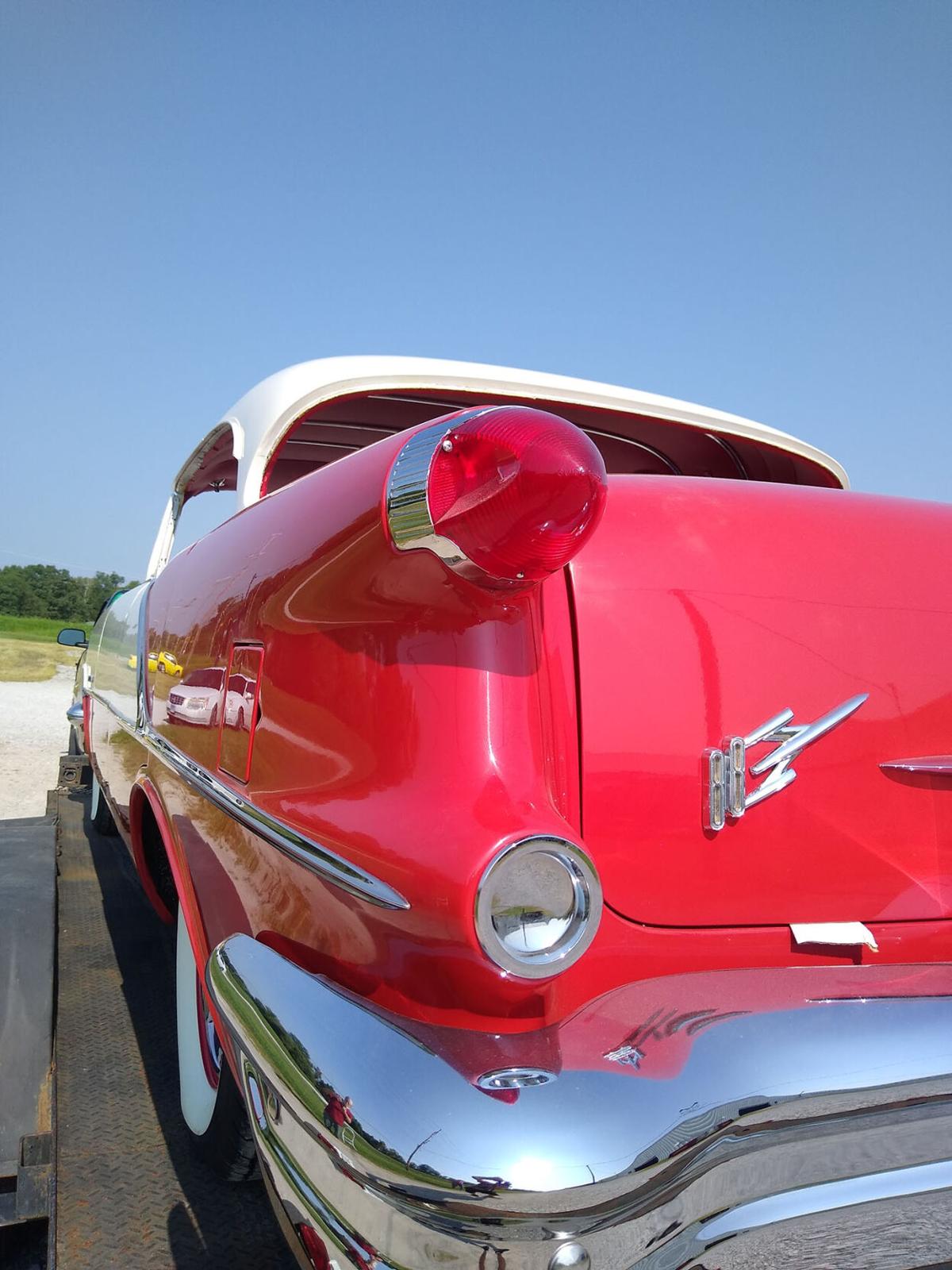 This photo of Randy's '56 Oldsmobile shows the "Starfire styling with "rakish new rear 'flair-away' back fenders. This styling cue is subtle, but refers to the slight slant of the rear fenders below the taillights. The 1955 had straight, upright lines at the same location. Photo provided by Bruce Kunz 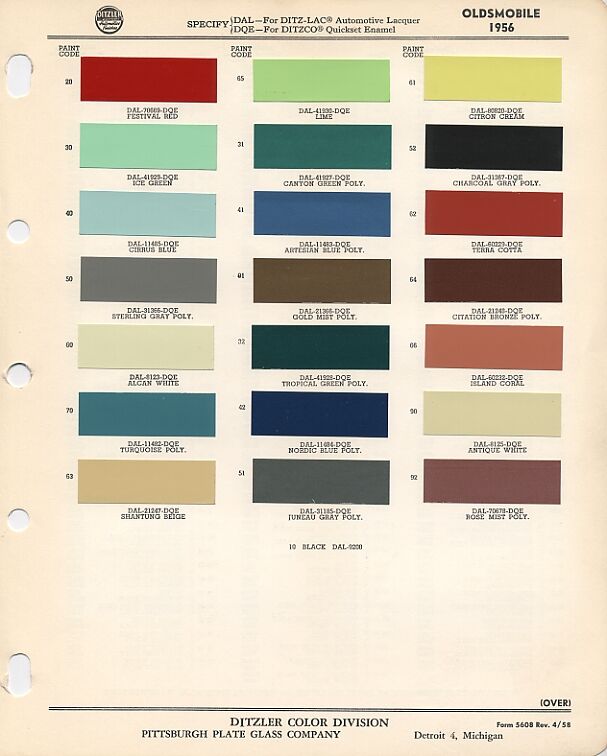 The colorful Oldsmobile palette for 1956. Photo provided by Bruce Kunz 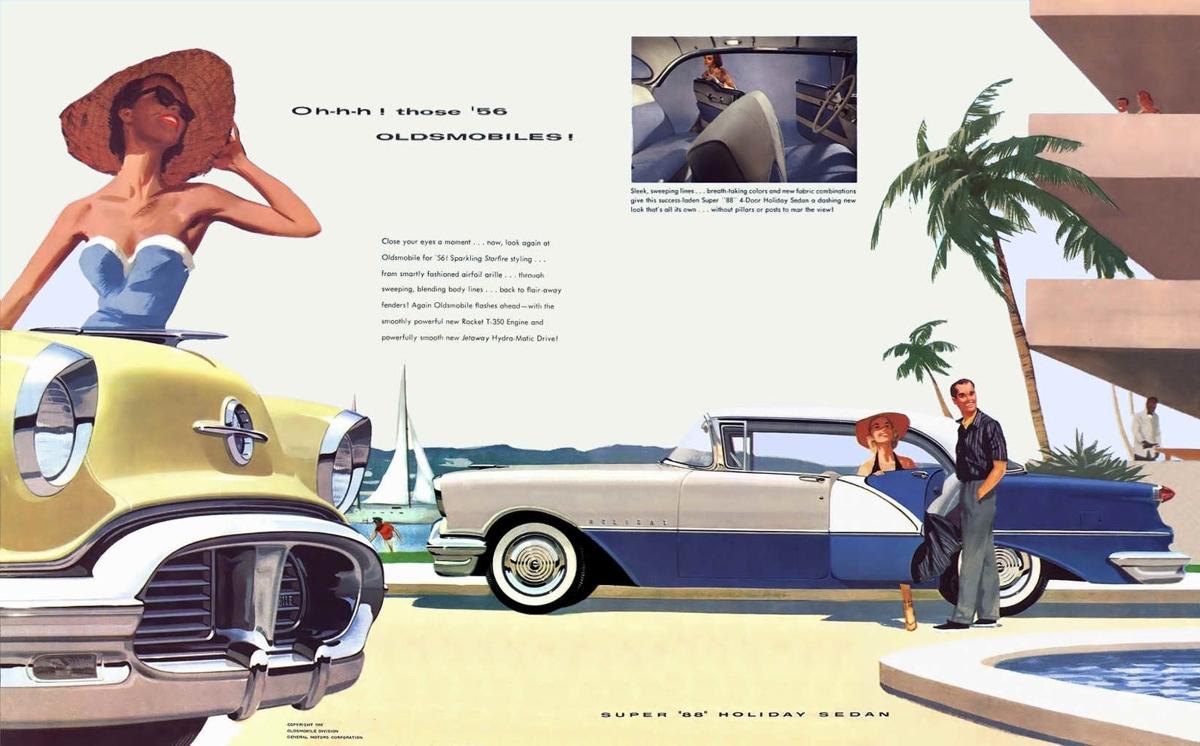 This photo from a page in the 1956 sales brochure touts the 1956 Olds Super 88 Holiday Sedan's "dashing new look that's all its own... without pillars or posts to mar the view!" Photo provided by Bruce Kunz 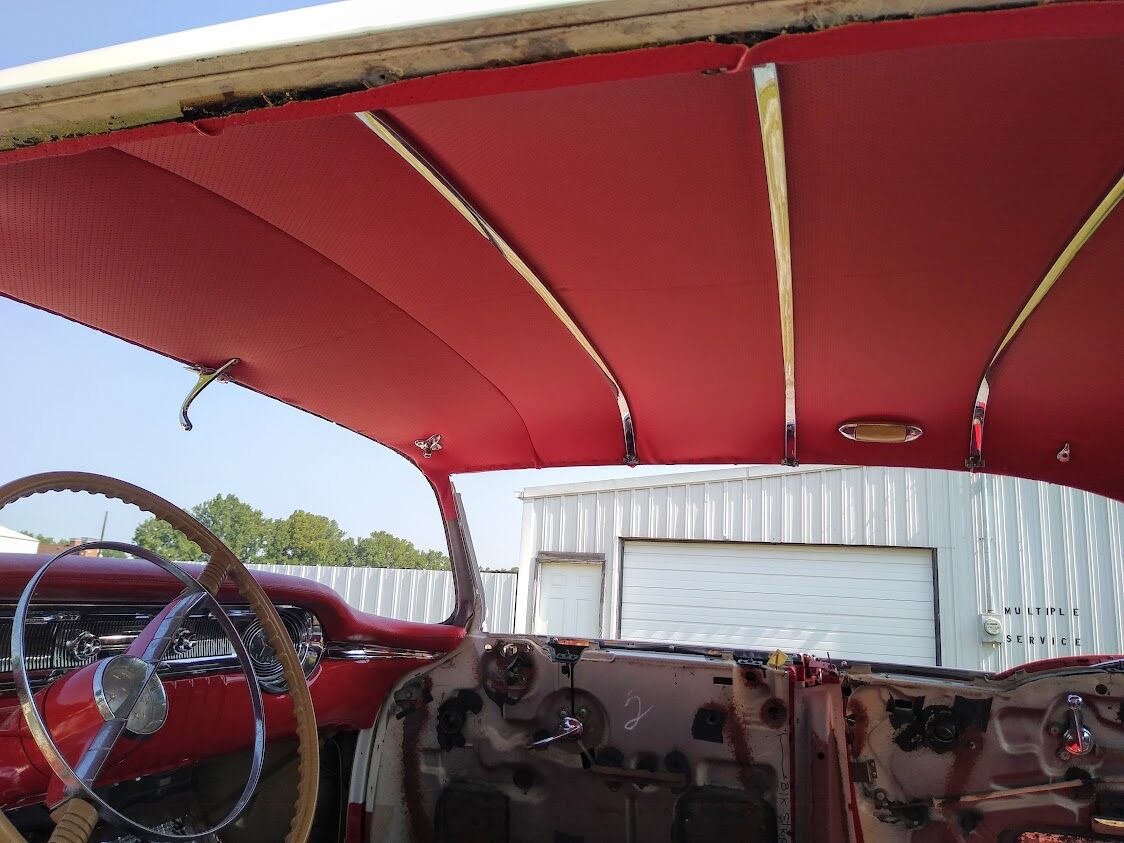 Shown here is the newly-installed headliner, the work of Bob Murphy. Photo provided by Bruce Kunz

This photo of Randy's '56 Oldsmobile shows the "Starfire styling with "rakish new rear 'flair-away' back fenders. This styling cue is subtle, but refers to the slight slant of the rear fenders below the taillights. The 1955 had straight, upright lines at the same location. Photo provided by Bruce Kunz

The colorful Oldsmobile palette for 1956. Photo provided by Bruce Kunz

This photo from a page in the 1956 sales brochure touts the 1956 Olds Super 88 Holiday Sedan's "dashing new look that's all its own... without pillars or posts to mar the view!" Photo provided by Bruce Kunz

Shown here is the newly-installed headliner, the work of Bob Murphy. Photo provided by Bruce Kunz

1. What Oldsmobile’s first compact car called, and for what model year was it introduced?

3. Who was the founding father of the Oldsmobile automobile, and what other car and truck manufacturer did he create?

3. Ransom Eli Olds was the founder of Oldsmobile and the REO line of automobiles and trucks.

Consider a path in the medical field at McKendree University

Content by McKendree University. The path to a career in the medical field may feel daunting, but you don’t have to walk it alone. At McKendree University, you’ll find everything you need to prepare you for graduate school and beyond, from expertly designed coursework and outside-the-classroom research opportunities to personalized guidance from faculty.