more info
This content was produced by Brand Ave. Studios. The news and editorial departments of the St. Louis Post-Dispatch had no role in its creation or display. Brand Ave. Studios connects advertisers with a targeted audience through compelling content programs, from concept to production and distribution. For more information contact sales@brandavestudios.com.
1970 Buick Electra 225 is a tribute to owner’s late father
0 comments
Share this

Looks like I’m going to have to spend more time at Krispy Kreme (but don’t tell Dr. Andrew Gold, he wouldn’t approve at all!). Last week I brought you the story of the awesome early Bronco build which I saw Saturday morning on my way to get my weekly KK fix. One week later I was doing the same thing, an early morning run to pick up two original glazed, when I came across the big, bodacious 1970 Buick Electra 225 seen on this page. I made a quick U-turn into Old School Automotive on Lincoln Trail in Fairview Heights to get a better look. This long, low Regal Black beauty brought back a flood of memories, from back in the late-‘90s, when my wife and I owned a 1969 Buick Electra 225 rag top and enjoyed it in shows, cruises and parades – including three St. Louis Mardi Gras Parades in Soulard.

But enough about mine. Adam Crown, owner and operator of Old School Automotive for the past 13 years, put me in touch with the Buick’s owner, Jerry Southward. Jerry’s dad was a U.S. Navy Seal and had always longed for a Buick Electra 225. He eventually found and purchased one, but never had a chance to work on it before he passed away in June of 2019.

And so began Jerry’s search for the car his dad always dreamed of owning. He likely could not have found a better own either. I mean the longest Buick of all, a full 225.8 inches in overall length, a drop top and done up in triple black! Oh, and did I mention, real-wire wheels wrapped in Vogue tires too!?

The car is basically stock, except for an after-market steering wheel which Jerry plans to replace with an original. Missing is the front grill emblem, a commonly missing badge due to the fact that it sits right up front of the V-shaped bumper, and this before the governmentally-mandated 5-mph bumpers came into being three years later.

The paint is in excellent condition and the interior is near perfect, save a small portion of the backrest on the driver’s side which has some tearing, which is surprising considering the condition of the rest of the upholstery.

This car is showing 72,000 miles which could be original based on the condition of the car.

It takes a lot to move a 4,341 pound land yacht, but under the hood of this juggernaut lies a 455 cubic-inch V-8 with a brake horsepower rating of 370. As you might expect, it demands premium fuel, and according to Fuelly.com, you can expect to get an “average” of 11.31 MPG! But at 34 cents per gallon, who really cared?

Jerry’s deuce-and-a-quarter has the 60/40 Expanded-Vinyl bench seat which was standard on the Electra 225 Custom convertible and available in Black; Red; Sandalwood and Burnished Saddle.

Jerry did a great job of searching for just the right car to make his father proud and somewhere up there, his dad is looking down and smiling on his dream car!

UPC0MING EVENT: Rollin’ with the FIN MAN V happens on Friday, September 17. The big, yellow school bus will be picking up attendees at two park and ride lots, the first on the southwest corner of Gravois and I-270 at 9 a.m. and the second at Lilac Avenue and I-270 at 10 a.m. From there, we will travel to a yet to be determined lunch destination.

After lunch we will head to the main event, a tour of the diverse collection of vehicles at the Charles Gallagher Museum. Mr. Gallagher’s collection is housed in a large garage in “Produce Row.”

To order tickets, please call me at 314-327-FINS (3467). Ticket prices are $45 per person. This is an exclusive Rollin’ with the FIN MAN event. Attendance will be limited to just 40 guests, so please reserve your seats ASAP.

If you are one of the ‘Lucky 40’ that will be rollin’ with me on Friday, September 17th: Congratulations, and be prepared for a fun and fascinating day!

A view from the stern of the 1970 Buick Electra 225 Custom convertible, a massive automobile, even by seventies standards! Photos provided by Bruce Kunz 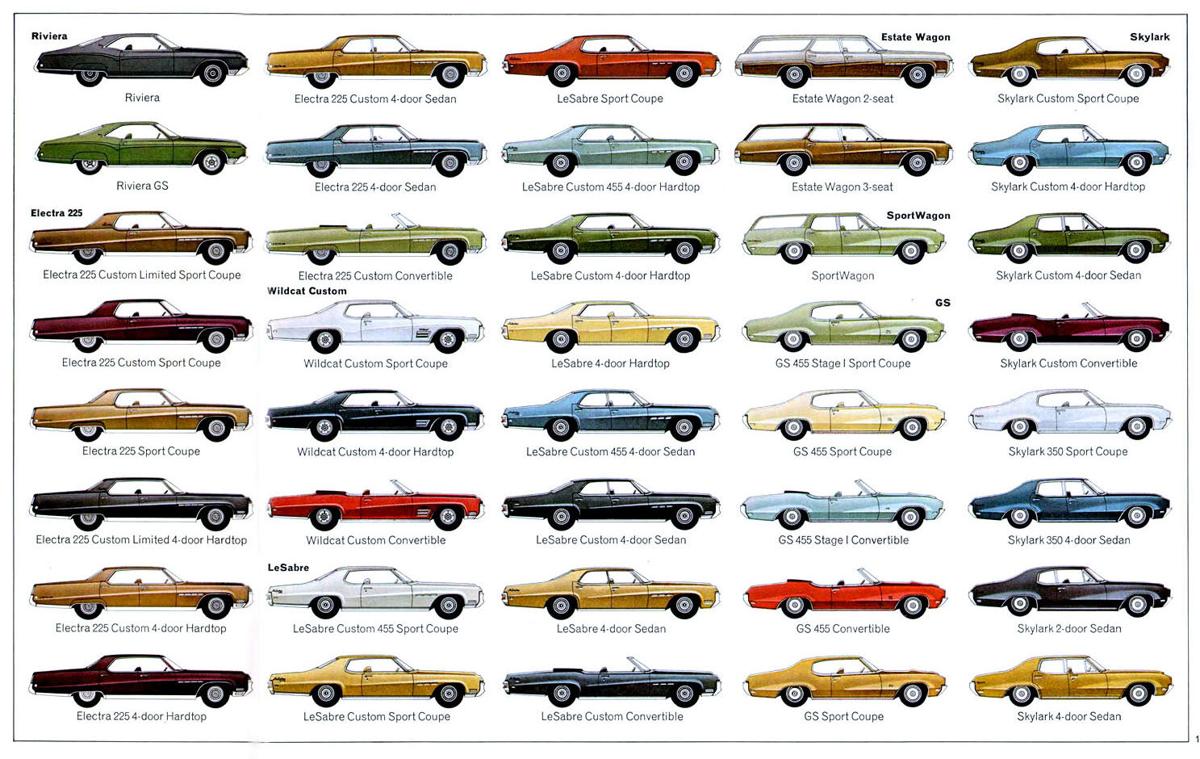 This page from the 1970 sales brochure shows the entire Buick lineup for 1970. 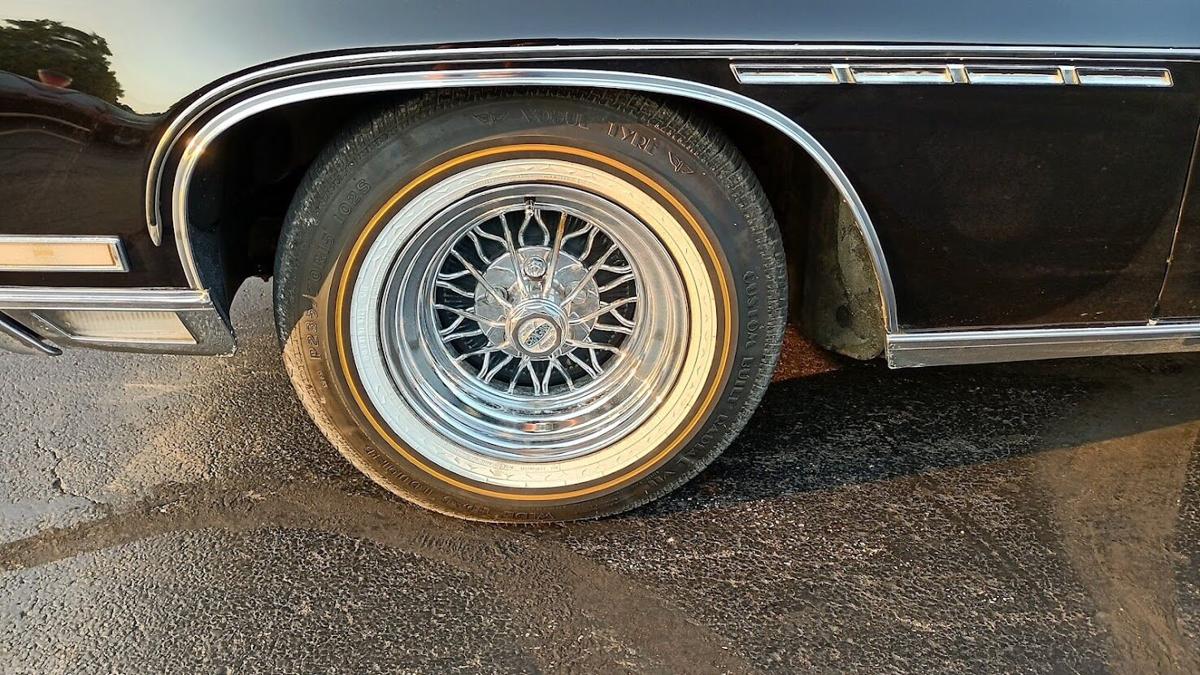 Not stock, but a nice touch, these true wire wheels, and Vogue tires look right in place on the formal, black Buick! 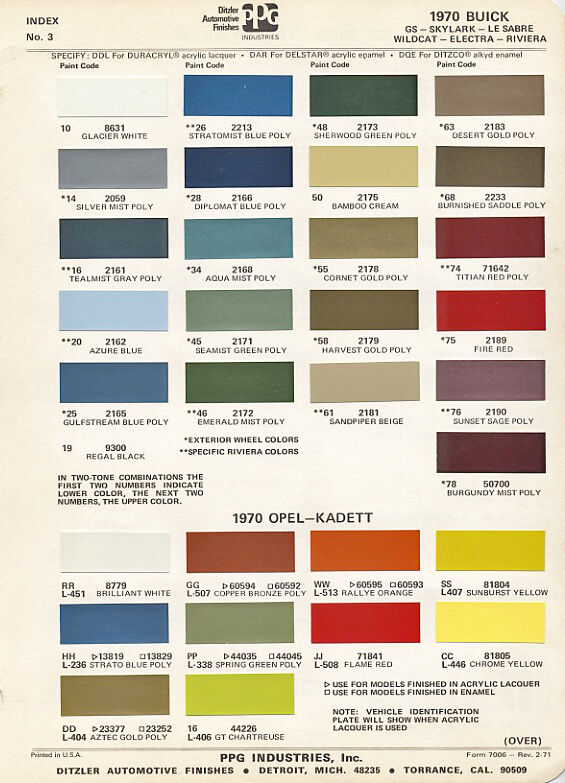 The color chart for 1970 Buick automobiles.

A view from the stern of the 1970 Buick Electra 225 Custom convertible, a massive automobile, even by seventies standards! Photos provided by Bruce Kunz

This page from the 1970 sales brochure shows the entire Buick lineup for 1970.

Not stock, but a nice touch, these true wire wheels, and Vogue tires look right in place on the formal, black Buick!

The color chart for 1970 Buick automobiles.

1. Let’s see if you’ve been reading your OCCs. What accompanies The FIN MAN’s Krispy Kreme donuts in the early morning?

2. This American rock band, whose hits included “Happy Together”, disbanded in 1970. Was it Deep Purple; The Who; The Eagles or The Turtles?

1. My two original glazed donuts are broken in halves and dunked in a mug of rich, hot cocoa which has been infused with several sugar cube-sized chunks of Swiss cheese.