more info
This content was produced by Brand Ave. Studios. The news and editorial departments of the St. Louis Post-Dispatch had no role in its creation or display. Brand Ave. Studios connects advertisers with a targeted audience through compelling content programs, from concept to production and distribution. For more information contact sales@brandavestudios.com.
2022 Honda Civic sedan: For the car's long-time fans, the 11th-generation sedan is playing your song
0 comments
Share this

The styling of the 2022 Honda Civic sedan reminded me -- of all things -- of an early Beatles tune. No kidding.

Sort of like the lyrics of "Things We Said Today," the look of the new Civic seems futuristic and -- at the same time -- retro! To illustrate, here's what Paul McCartney said in an interview about the words of that 1964 tune: "The song projects itself into the future, and then is nostalgic about the moment we're living in now."

The styling of the new Civic, I think, sort of does the same thing. The blunt, RoboCop-ish nose -- a major departure from the sharp, angular face of its predecessor -- seems to my eye like a 1980's take on how 21st-century automotive styling might evolve. Then Civic dons that look for 2022, making its 21st-century facial expression seem appealingly retro.

And, after all, it's styling that really differentiates this 2022 model from its 10th-generation, 2016-2021 predecessor -- a differentiation that continues in this 11th generation Civic's smoothly lined profile.

Inside, "the-future-is-now" theme continues with a thin, sweeping grill in the dashboard that stretches from the driver's door to the passenger's portal, broken only by the steering wheel. In that grill are vents so seamlessly incorporated into the lattice work they are virtually invisible. Only swivel sticks for air direction betray their existence. Very clever.

Beneath this futuristically retro theme is an array of greasy stuff that is largely carried over.

Available in trims of LX, Sport, EX and Touring, the Civic sedan's LX and Sport trims are still powered by a 158-hp, 2.0-liter I-4 while EX and Sport still trade up to a 1.5-liter turbocharged four. That turbo, however, is mildly revised -- 6 more hp and 15 additional pound-feet of torque -- to generate 180 hp and 177 lb.-ft. of grunt.

With the new Civic sedan, buyers can have any transmission they want, as long as they want a CVT automatic. Sport and Touring, however, throw in paddle shifters for a bit more driver involvement. (A manual, we're confident, will be offered with the upcoming Si and Type R models.)

In our Touring, Sport, Normal and Econ driving modes complemented Civic's typical well-controlled ride on Touring's 18-inch Goodyear Eagle Sports. Add the confident handling and communicative steering for which Civic is known, and pretty much all is well. Our only complaints: the otherwise supportive front buckets in Touring were woefully lacking in lumbar support; and, at stop lights, the whole car shuddered when the engine's fuel-saving Auto Engine Shut-off feature kicked the four-banger back to life.

Otherwise, it's all good. We greeted 60 mph in the mid-7's, which is class-competitive, while realizing 31 mpg in just over 100 miles, more on surface streets than on the highway.

Regarding infotainment, we missed a radio-tuning knob, but a volume knob is present, as are handy, steering-wheel-mounted toggle switches for radio volume and cruise-control speed.

Perched atop the dash in our Touring was a 9-inch infotainment touch screen that was big, clear and easy to navigate.

Interior room is good for a compact, both front and rear. In fact, rear leg room is doable for a tall guy behind a tall driver while rear head room is excellent under the scalloped headliner. This is a surprisingly accommodating compact-sedan back seat.

With markedly improved styling that manages to be both contemporary and retro, a roomy and functional interior and comfortably familiar mechanicals, the 11th generation Honda Civic is just what we'd expect from a Honda Civic: a sensible, engaging choice.

And that's the thing we said today. 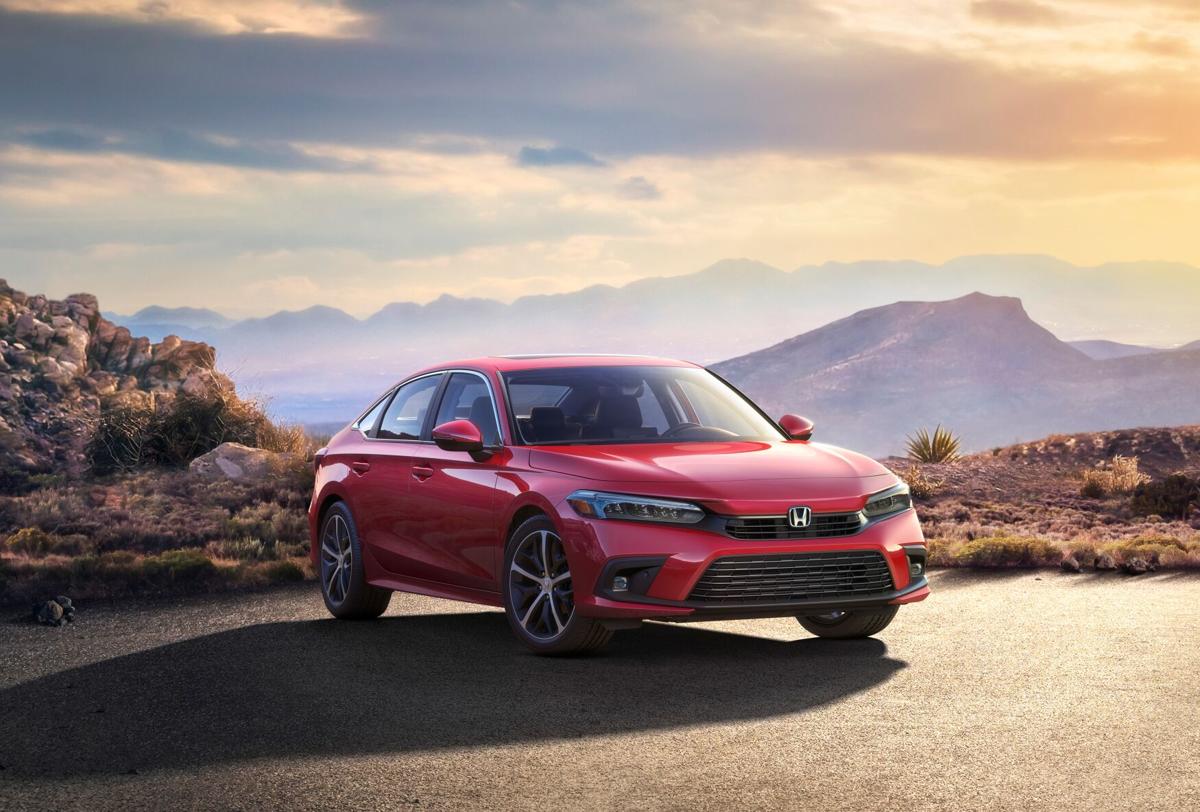 While the greasy stuff is generally carried over, the styling of the 11th-generation Civic sedan is all-new. 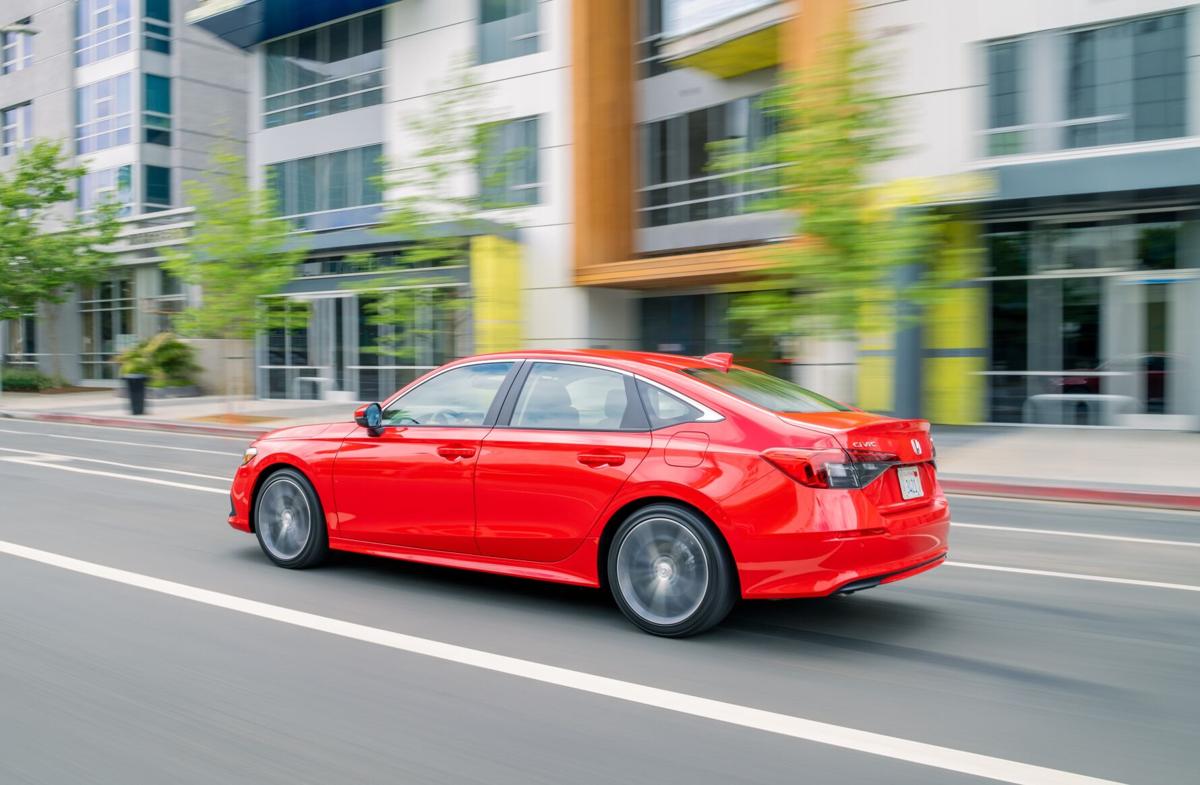 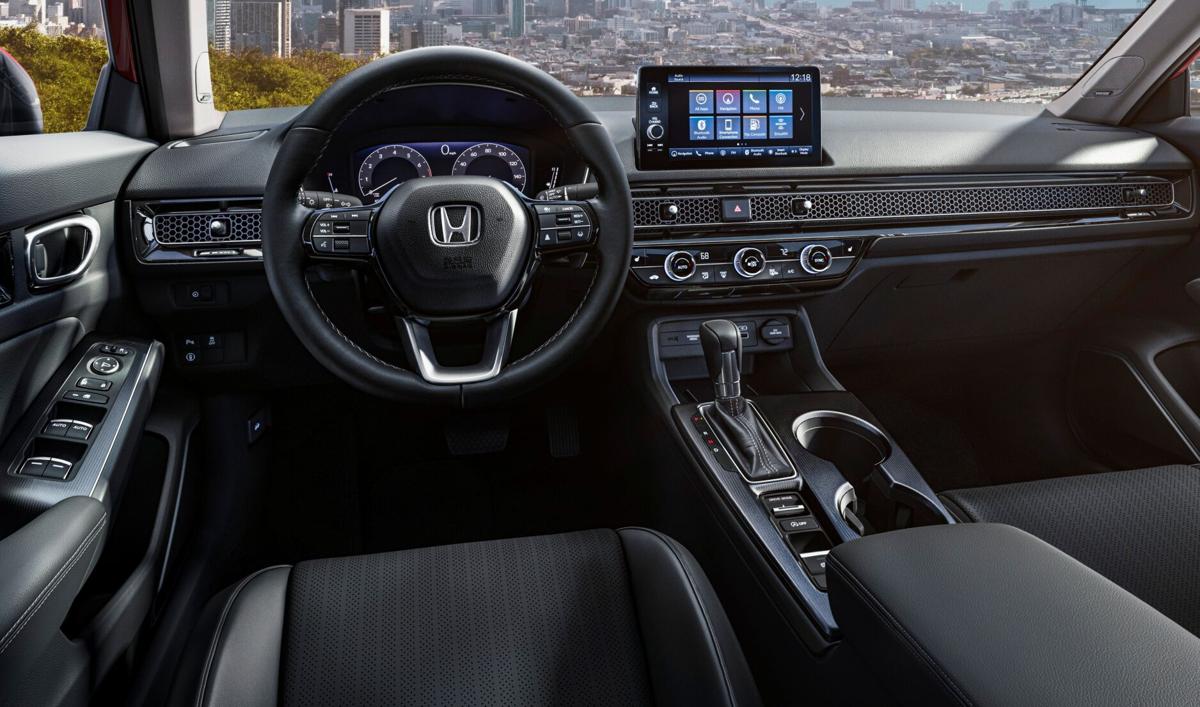