more info
This content was produced by Brand Ave. Studios. The news and editorial departments of the St. Louis Post-Dispatch had no role in its creation or display. Brand Ave. Studios connects advertisers with a targeted audience through compelling content programs, from concept to production and distribution. For more information contact sales@brandavestudios.com.
2022 Jeep Wagoneer: The name is classic but the vehicle is a humongous, state-of-the-art SUV
0 comments
Share this

Oh, wait . . . now I know! The name's familiar because that moniker goes back more than half a century. It was back in 1963 that the first Jeep Wagoneer debuted as a full-size sport-utility vehicle, predating the phrase "sport-utility vehicle" by roughly three decades. Of course, the face of this newcomer isn't familiar because the mug -- along with everything else -- is all new.

Deriving its frame from Ram 1500, but benefiting from an independent rear suspension, this humongous, three-row, seven- or eight-passenger, body-on-frame, full-size SUV is offered in Wagoneer and Grand Wagoneer models.

The Wagoneer is powered by a 5.7-liter V-8 that employs both cylinder-deactivation and a 48-volt electric-hybrid system, thereby generating 392 hp while earning a 22-mpg EPA highway rating in rear-drive models; Grand Wagoneer is motivated by a brawny 6.4-liter, 471-hp V-8. Either way, an eight-speed automatic manages the proceedings.

Aimed at the Cadillac Escalade and Lincoln Navigator, Grand Wagoneer, starts at -- yowza! -- $88,995 and can easily get into six figures for the perks-loving buyer. Starting at $59,995, Wagoneer is offered in trims of Series I, Series II and Series III and targets the likes of the Chevy Tahoe, GMC Yukon and Ford Expedition.

Interestingly, Jeep says these Wagoneer siblings represent a "premium extension of the Jeep brand." Which goes a long way to explaining why it requires the observational skills of Sherlock Holmes to find the word "Jeep" anywhere on the vehicle.

We drove a 4WD Wagoneer Series II and managed to find the J-word in tiny type in just three well-hidden locales: in the headlight assemblies, taillight assemblies, and embossed on the plates that anchor the outside rearview mirrors to the front doors.

While rear-drive is standard, buyers can also choose from three 4WD systems: Quadra-Trac I, Quadra-Trac II and Quadra-Drive II. That last one, which our 4x4 had, includes low-range gearing for serious off-pavement talent. On pavement, meanwhile, we had occasion to travel to Steeleville, Mo. -- a 170-mile highway round-trip that saw our Wagoneer 4x4 return to us 20 mpg, just as the EPA figured.

On the road, thanks to a height-adjustable air suspension, indy rear suspenders and a light steering effort in Auto mode, the driving experience was extraordinarily cushy for such a big vehicle. So much so, in fact, that about 30 miles into our trip I employed the drive-mode selector -- Rock, Sand/Mud, Snow, Auto and Sport -- and engaged the Sport mode. That firmed things up a bit and made the handling of this massive vehicle feel more controlled, which I found comforting at 70 mph.

The cabin, as expected, is hushed while room in our eight-passenger model was spectacular in all three rows. The endlessly reconfigurable three-section middle row is spacious while the 60/40-split third row can accommodate average-stature adults.

The interior decor in our Series II, with its wood, piano-black trim, creamy leather, contrasting stitching, satin-metal accents and other eye-popping cues, was stunning. One passenger who climbed into the shotgun seat gasped, "My gawd, this is nice!"

The infotainment, with a touch screen nicely incorporated into the center stack rather than tacked atop the dash, is easy to navigate. Meanwhile, exterior styling is the latest in Jeep elegance, with a forward leaning seven-slot grille and a tall, square, aft end that looks like it means business.

Wagoneer, not to mention Grand Wagoneer, is pricey as heck, but this newcomer is an extraordinarily versatile vehicle that'll haul people and stuff, competently tackle off-road adventures and tow up to 5 tons -- and do it all in style. 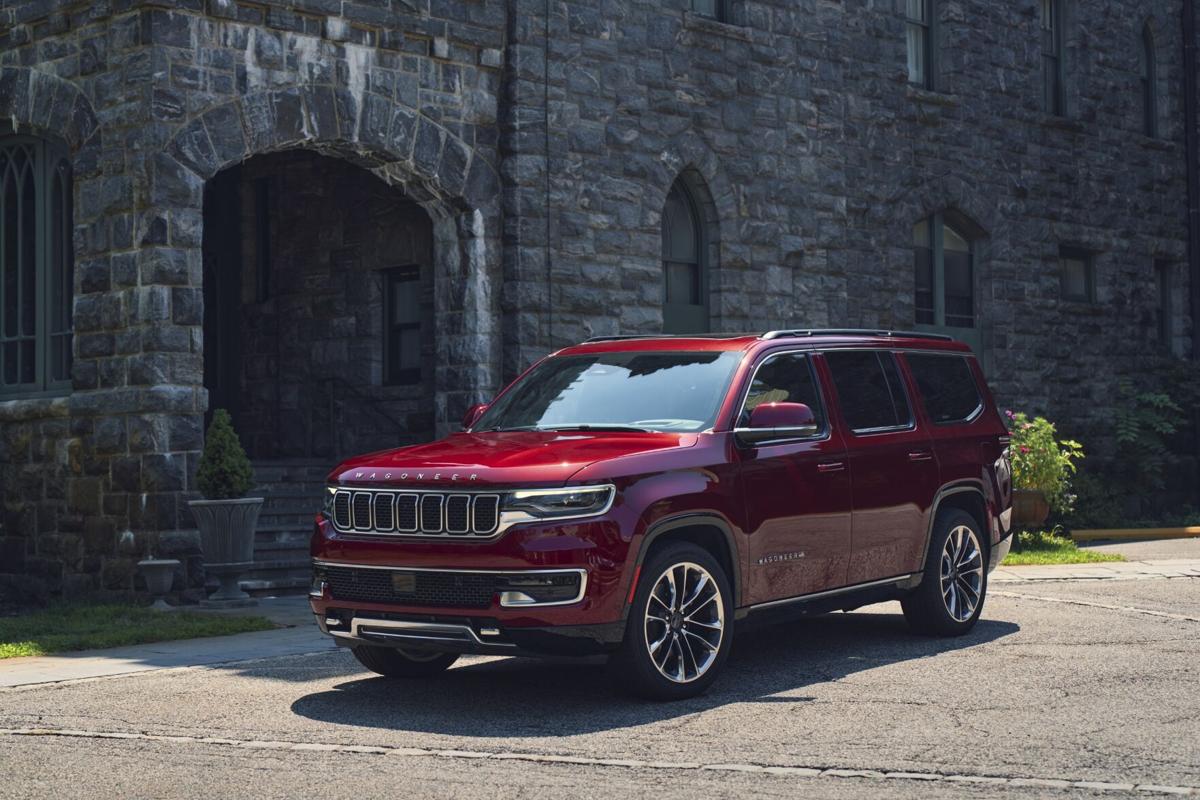 The 2022 Wagoneer and Grand Wagoneer represent a "premium extension of the Jeep brand." Which is why no "Jeep" badges appear on the body. 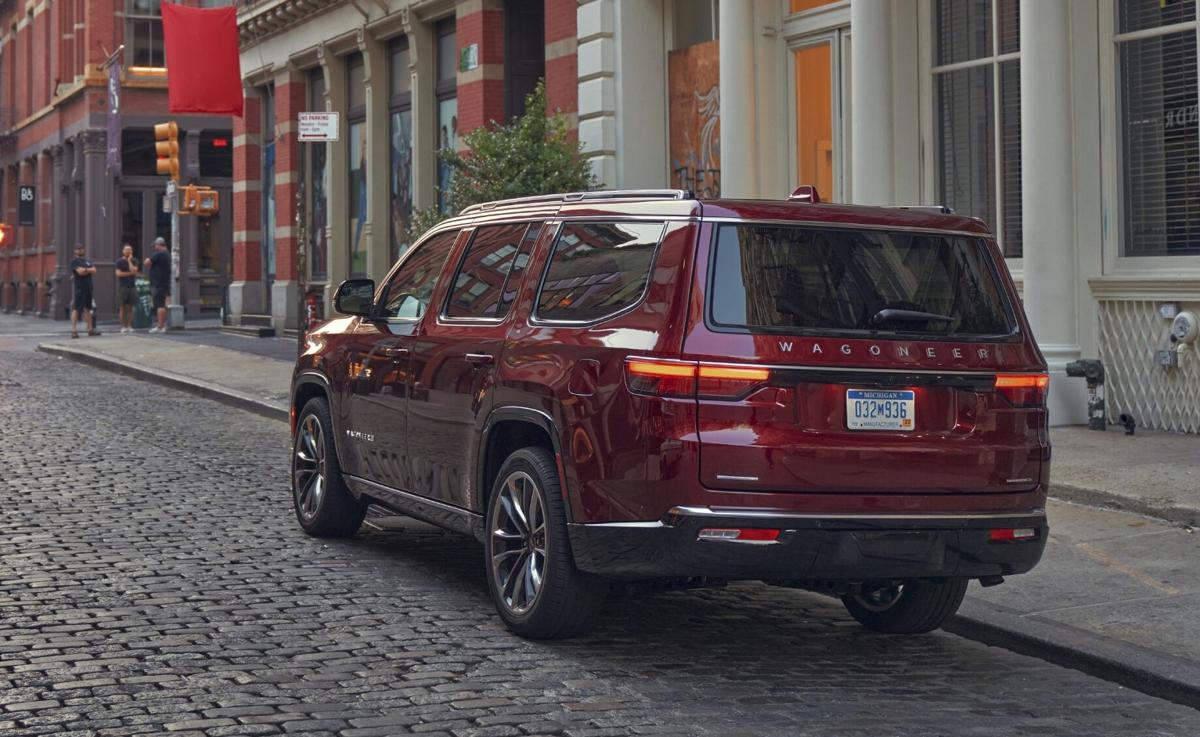 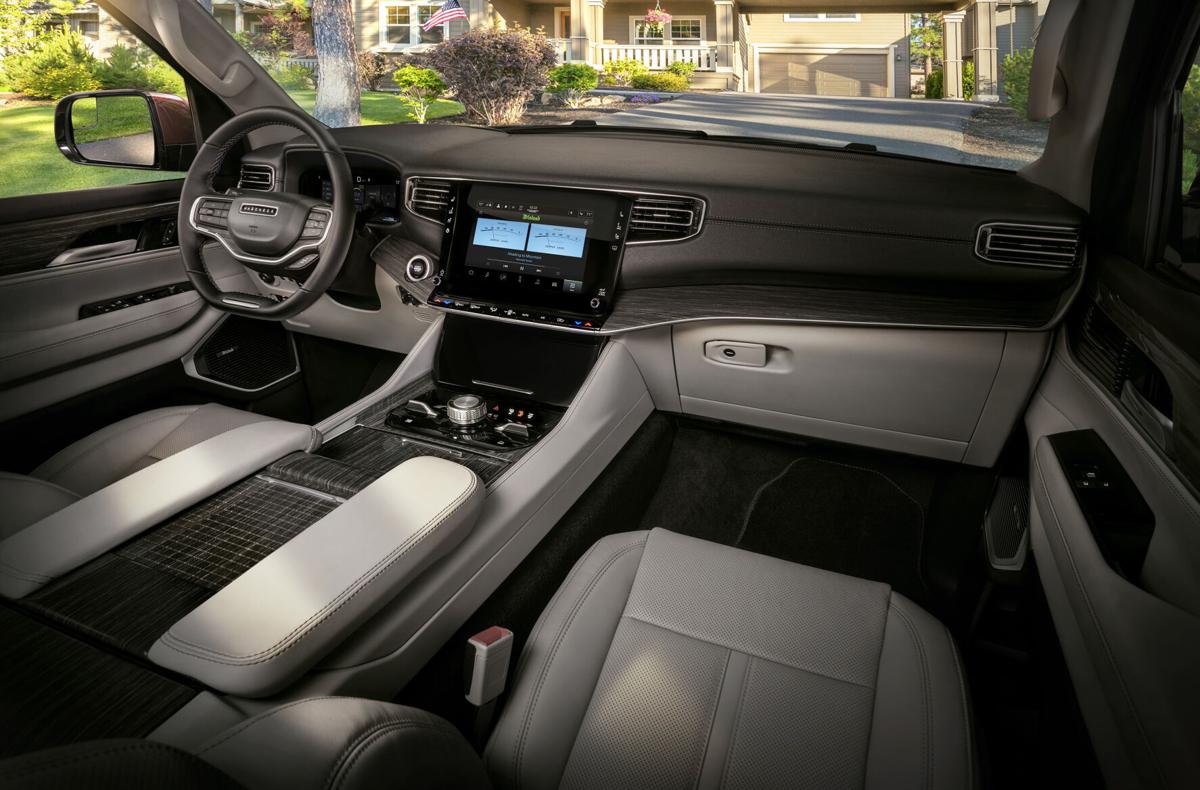