Tahoe is the best-selling vehicle in its class, accounting for roughly one of every four full-size SUVs sold in the U.S.

Suburban, born in 1934 for the 1935 model year, is the oldest nameplate in Chevy’s showroom. For a vehicle brand whose 108-year history has featured loads of classic monikers, that’s saying something.

Clearly, GM is determined to meet them.

Both the 2021 Tahoe and Suburban, compared to their predecessors, are larger, roomier, techier, better-handling and, with the segment’s only available diesel, more fuel efficient, GM promises.

In addition, for the first time, these SUVs, in a class-exclusive, will offer a diesel in the form of a 3.0-liter, straight-six turbo that generates a 460 lb.-ft. of torque.

Regardless, every 2021 Tahoe and Suburban will be managed by a new 10-speed automatic.

In another first for these Chevy SUVs, both, despite sharing their basic platforms with the latest Silverado pickup, will -- unlike the truck -- offer an independent rear suspension. That, along with available Magnetic Ride Control and an optional, height-adjustable Air Ride Adaptive Suspension, promises a smoother ride and better handling, GM says.

Inside is a technological tour de force. Up to five display screens can be had, including a standard 10-inch touchscreen and, optionally available, an 8-inch diagonal instrument cluster, 15-inch Head-Up Display and twin 12.6-inch rear-seat displays for aft-passenger entertainment.

The driver also can be treated to nine camera views, along with new trailering features that include trailer profiles, trailer tire pressure/temperature monitoring and trailering-specific Side Blind Zone Alert.

Both Tahoe and Suburban will be offered in trims of LS, LT, RST, Z71, Premier and High Country, that last one getting the bigger V-8 standard.

Here’s a look at changes specific to each of these big new people-/cargo-haulers.

Riding a 120.9-inch wheelbase -- 4.9 inches longer than the current Tahoe’s -- the 2021 edition, with an overall length of 210.7 inches, casts a shadow that’s 6.7 inches longer than before. That, along with the indy rear suspension, helps account for the new Tahoe’s 40-percent increase in third-row leg room and astounding 66-percent increase in behind-the-third-row cargo space, now a robust 25.5 cu. ft.

Riding a 134.1-inch wheelbase -- 4.1 inches longer -- the 2021 edition, with an overall length of 225.7 inches, casts a shadow that’s 1.3 inches longer. That, along with the indy rear suspension, helps account for the increase of a few inches in middle- and third-row leg room and 19-percent jump in behind-the-third-row cargo space, which is now a robust 41.4 cu. ft.

(spec applies to both vehicles unless otherwise noted)

EPA MPG: Not yet certified (In a statement, GM says the diesel “is expected to give the new SUVs some of the highest fuel economy ratings in the segment.”) 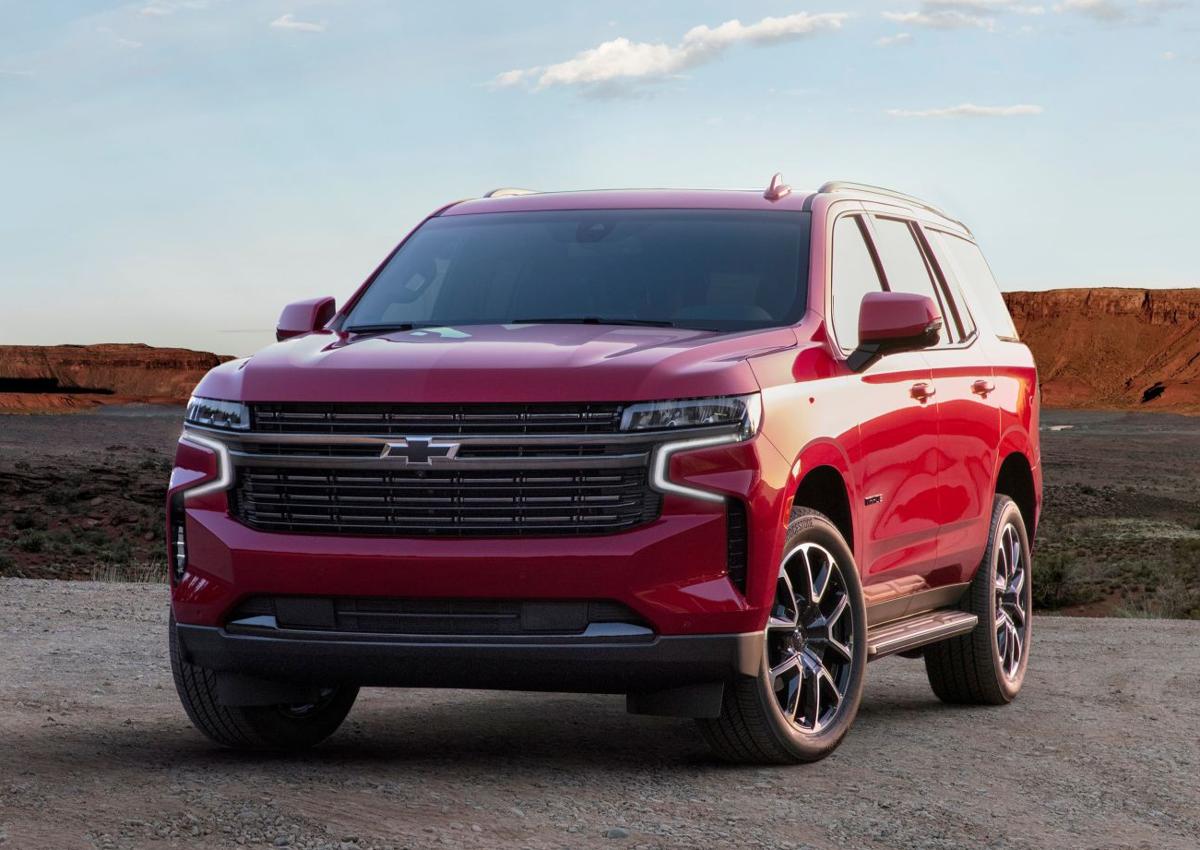 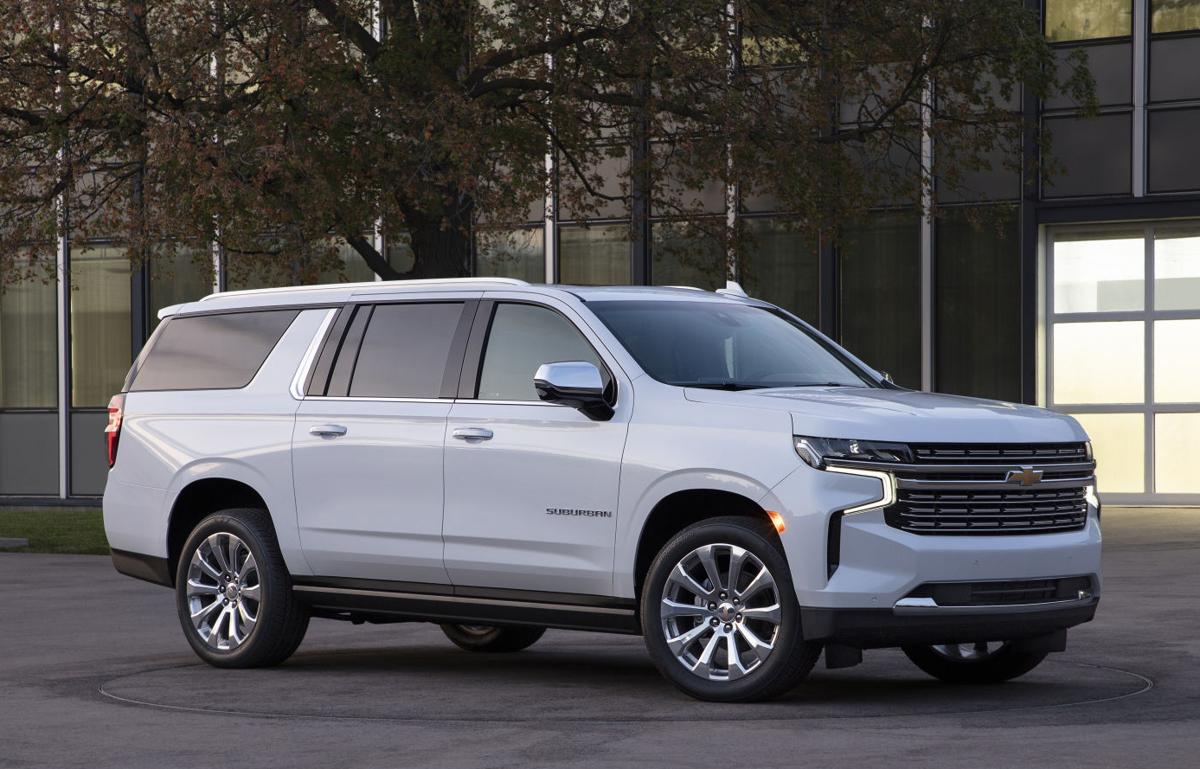 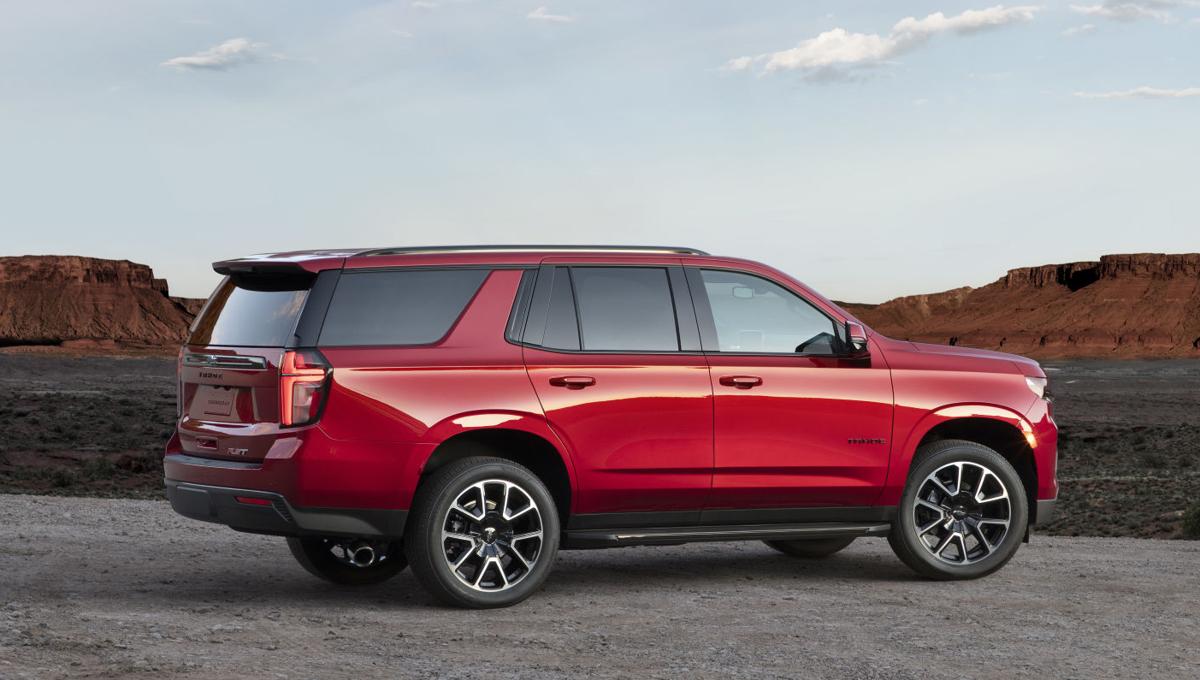 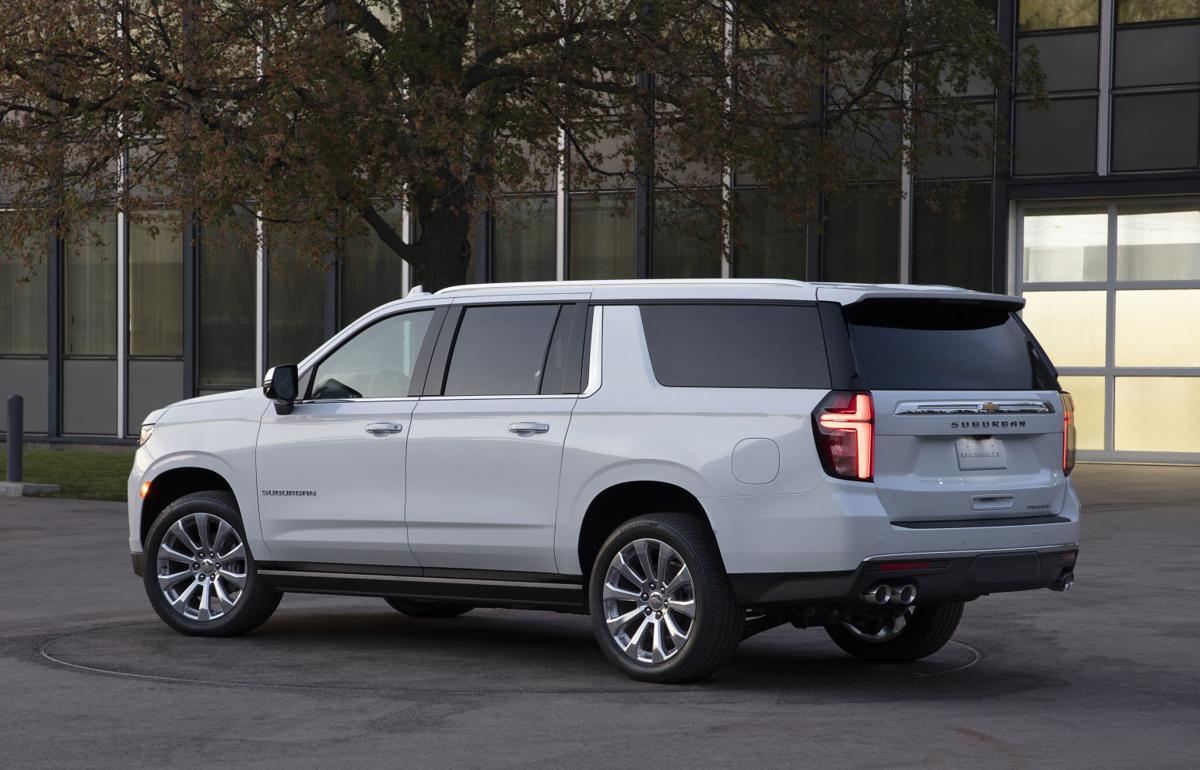 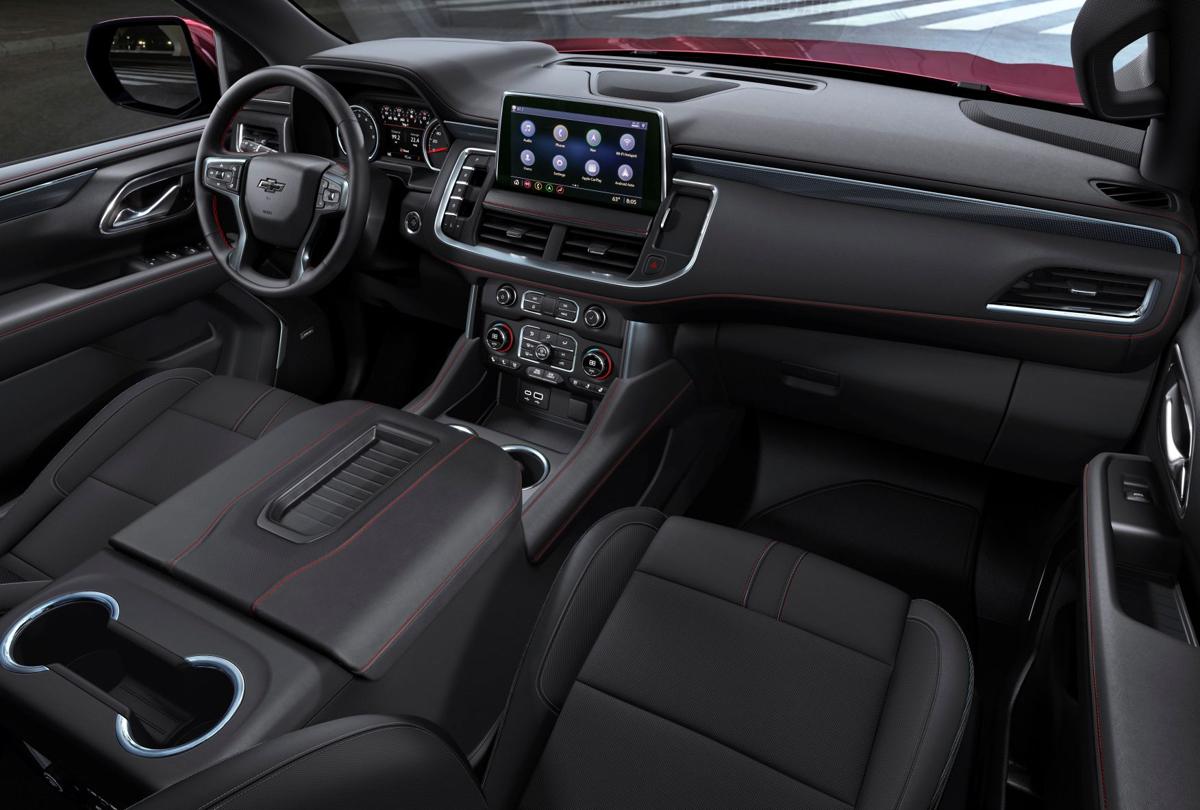 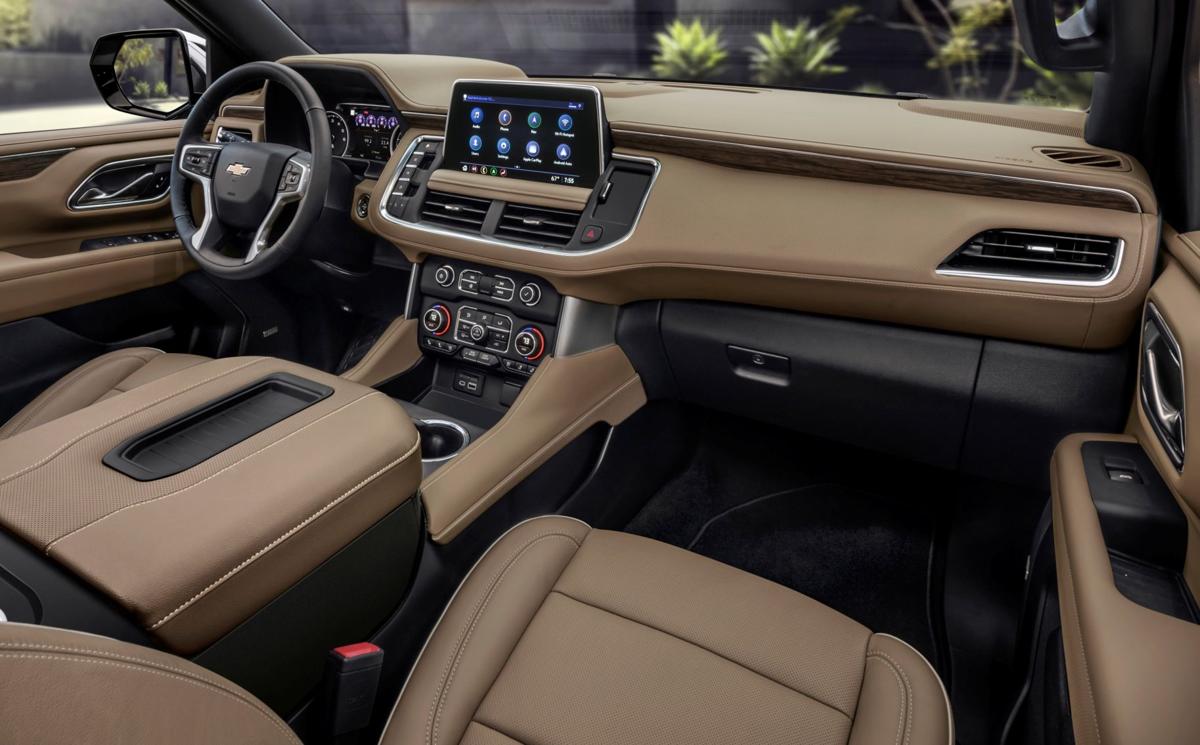 The 2021 Chevrolet Suburban, like its Tahoe relative, can be had with up to five interior display screens. Photo provided by Chevrolet