People often ask me how I come up with an idea for a subject car for a new story every week. The ways are many. Often it’s a car I’ve seen on the road or at a car show or cruise. Sometimes it’s a car that I’ve heard about through the grapevine. But this week’s feature car came about in a new, first-ever way.

As I was looking through our collection of holiday decorations the other day (with Christmas just around the corner), I came across the handsome Hallmark tree ornament shown here, depicting a 1955 Ford Crown Victoria Skyliner, all decked out in Diamond Blue and Colonial White. It is one of the more handsome models in the Hallmark collection.

The Crown Victoria Skyliners (the real ones) were produced from model years 1954 through 1956. While an interesting concept, which turned more than a few heads back in the day, the car was not received with nearly as much enthusiasm as one would have thought, primarily because of the very feature that made it so fascinating in the first place – that unique, green-tinted Plexiglas roof itself.

Anyone who went for a test drive in one of these fishbowls on an oppressively hot day in mid-July, would think twice before signing an order! The interiors were like ovens in the summer heat, unless perhaps you lived in the far Northern states along the Canadian border. If automobile air conditioning had been more advanced in 1955, it may have been a different story. While Ford’s biggest rival, Chevrolet, offered air conditioning on their 1955, V8-equipped models, Ford didn’t offer air conditioning until 1958. Debuting at a hefty $395 (equal to $3,852 in 2020 monies), the number of 1958 Fords so equipped, was scant to say the least.

The totally redesigned, lower, longer and wider 1955 Fords rode on a 116-inch wheelbase, had an overall length of 199 inches and measured 79.5 inches in overall width.

Nineteen fifty-five was a banner year for Ford, with a total of 1,435,002 units built, making it the second best year in Ford Motor Company’s history behind 1923 when the Model T was king-of-the-road. The 1955 Ford Fairlane Crown Victoria Skyliner had a factory suggested base price of $2,272 with a six-cylinder under the hood... $2.372 with the standard, 272 cubic-inch, 162 horsepower V-8. A more spirited driving experience was made possible by the optional 292 cube Thunderbird V-8 with a Holley 4-barrel carb, pumping out an additional 30 ponies.

FIN MAN FACTOID: People are often confused by the Skyliner moniker because, when the glass-roofed two-door Crown Vic had run its course after the 1956 model year, the name was reassigned to the new, ‘retractable hardtop’ convertible for 1957. The new Skyliner retractable would survive for another two model years, ending its stint in 1959.

UPCOMING EVENTS: We’re still watching the COVID-19 numbers in hopes that things will open up a bit after the first of the year. I would like to resume Breakfasts with the FIN MAN and Take a Car Show to the Kids at local children’s hospitals, as soon as possible... and, I have three TKCS-STL Participating Volunteers (well, four, including TKCS mascot Roy), that are really looking forward to a better, if not normal, car show and cruise season for 2021! Aren’t we all?

Meanwhile, thanks for reading the Old Car Column... drive carefully, stay safe and healthy, and Keep on Cruisin’! 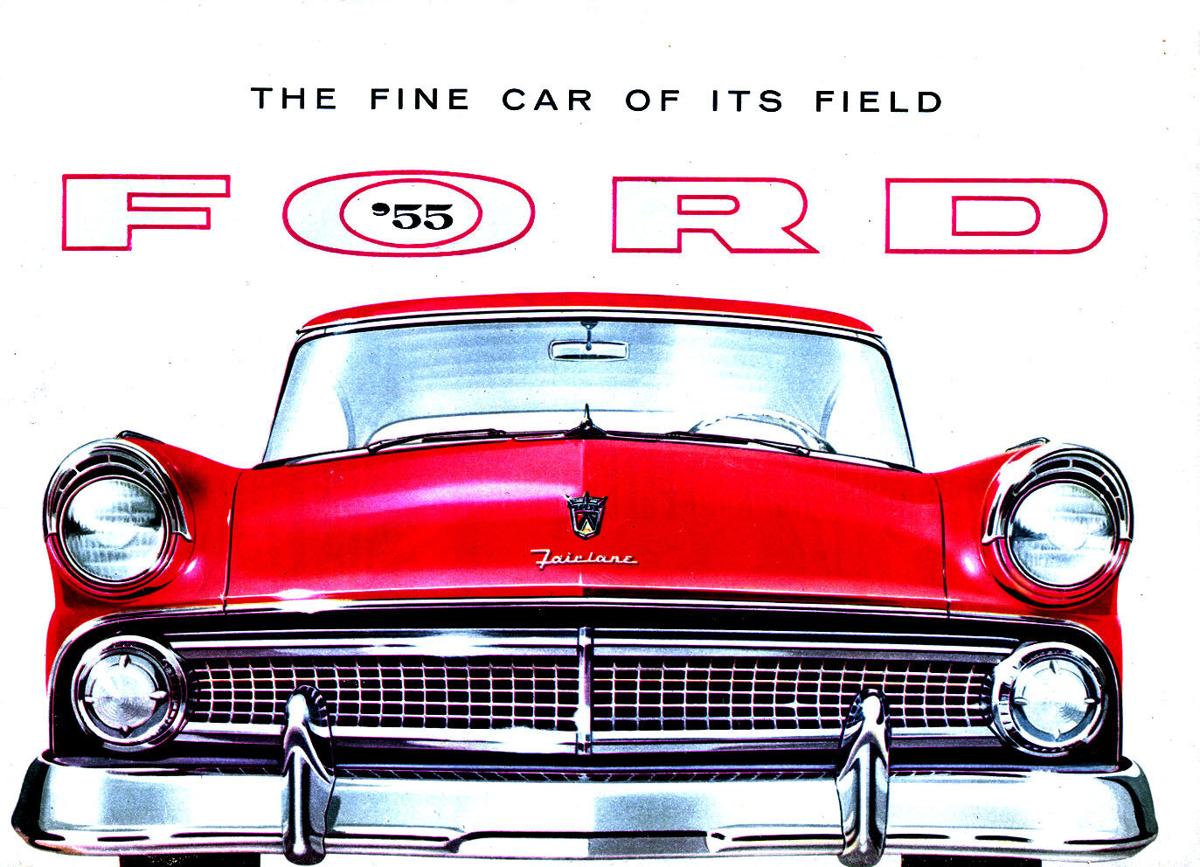 The cover of the 1955 Ford sales brochure. Photo provided by Bruce Kunz 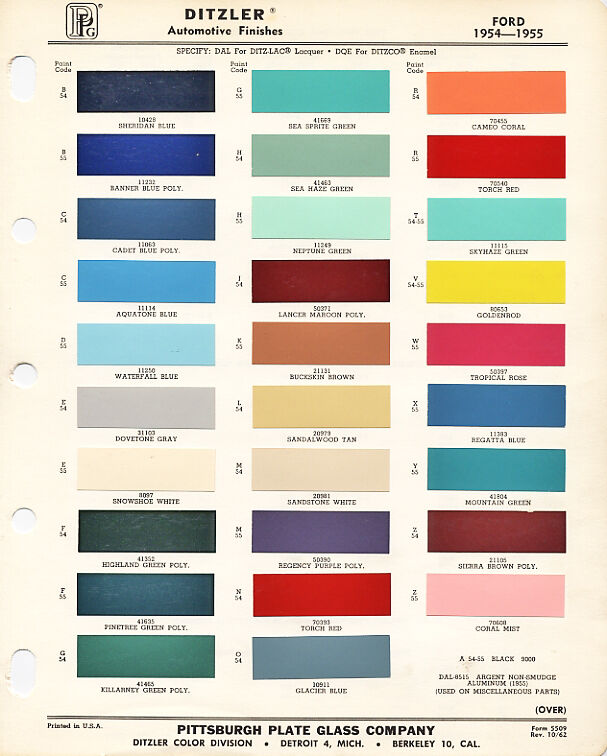 The colorful offering of hues for the 1955 Ford cars. Photo provided by Bruce Kunz 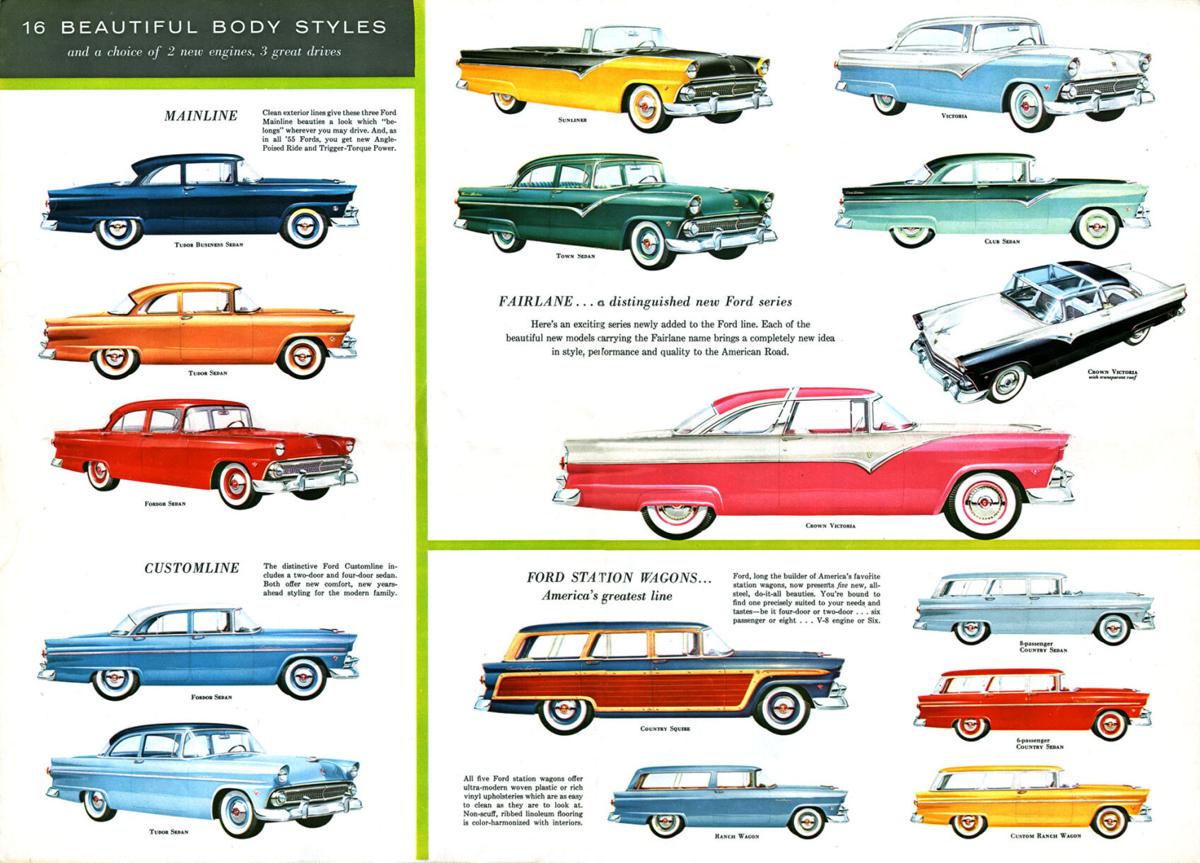 A page from the showroom brochure showing all of the Ford models for 1955. Photo provided by Bruce Kunz 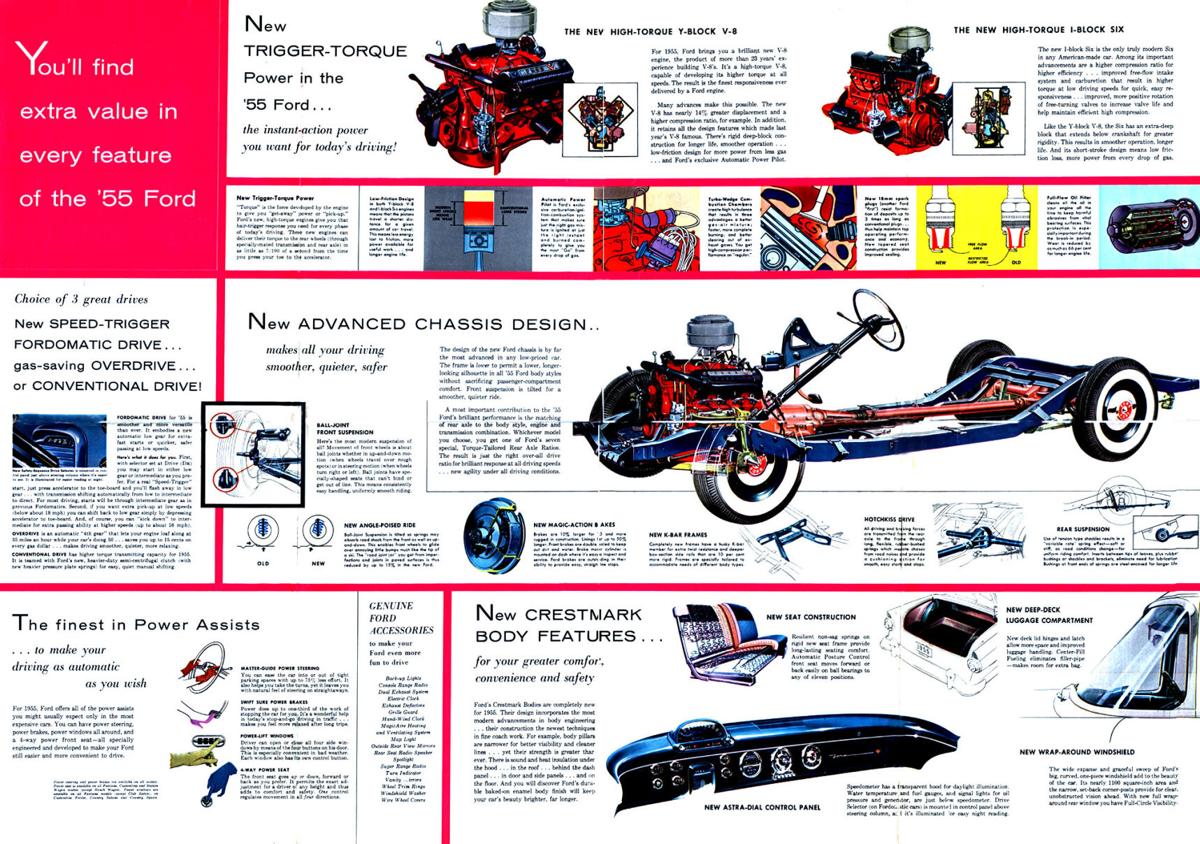 This page lists all the technical details for those with an interest. Photo provided by Bruce Kunz

The cover of the 1955 Ford sales brochure. Photo provided by Bruce Kunz

The colorful offering of hues for the 1955 Ford cars. Photo provided by Bruce Kunz

A page from the showroom brochure showing all of the Ford models for 1955. Photo provided by Bruce Kunz

This page lists all the technical details for those with an interest. Photo provided by Bruce Kunz

2. Mercury had a sibling with the same transparent, Plexiglas, green-tinted roof. What was its name?

3. June 7, 1955– the ‘quiz show’ craze begins with the premiere of what show? The 64 Thousand Dollar Question; The Price is Right; You Bet Your Life or I’ve Got a Secret?

4. What brand of automobile was the first to offer car air conditioning, and for what model year?

1. Birds do it, bees do it, even educated fleas do it. ‘Let’s Fall in Love’, is a song written by Harold Arlen (music) and Ted Koehler (lyrics), for the film Let’s Fall in Love, published in 1933. It has been covered by numerous artists through the years, including Peaches and Herb; Linda Scott; Shirley Bassey; Frank Sinatra and Ella Fitzgerald, to name just a few. The Four Aces, with the Jack Pleis Orchestra recorded it in 1955.

3. The 64,000 Dollar Question. Within a short two years, the show would become embroiled in the focus of a quiz show scandal that resulted in congressional hearings.

4. Packard was the first automobile manufacturer to offer air conditioning. The model year was 1939.

As a teacher and a coach, Jamie Stokes takes a dynamic approach to education.