Hummer H1: Not just for the military
0 comments
Share this

Since the first Hummer was introduced, there have been many versions of this unique, High Mobility Multipurpose wheeled vehicle (or HMM) to hit the roads and/or the sands.

Built in Mishawaka, Indiana by AM General, the H1 was the down and dirty, rough and tough model of the brand. The Hummer marque would eventually grow to include the softer and smaller H2 and H3 models, designed to satisfy the average consumer wanting something just a bit more utilitarian than the average Jeep.

Manufactured by AM General, from 1992 to 2006, the Hummer H1 was the first vehicle of its kind, setting a new standard for toughness. Powered by a 6.2-liter Detroit Diesel V-8, the military version of the H1 was called the “Humvee.” Shifting was accomplished by one of three GM automatic transmissions, the TH400/3L80 3-speed, 4L80-E 4-speed or Allison 1000 5-speed.

FIN MAN Factoid: The popularity of the HUMMER H2 with the general public created a demand for a stretched limousine version. The HUMMER H2 was cut behind the cab and the chassis extended to create a passenger section for 14, 16 or even 22 passengers. The demand initially was for clients in the United States but quickly became popular in the UK and especially Australia. The limousine hire industry have adapted the all-terrain vehicle to become a social vehicle to celebrate events. Although not in mass production since 2010, the H2 vehicles are still engineered and modified by private manufacturers worldwide.

Most H1s were equipped with a Central Tire Inflation System (CTIS), which enables the driver to increase or decrease the tire air pressure at the push of a button, since lower tire pressures are more suited for off-road and higher tire pressures are desirable for highway travel.

The Hummer H1 tipped the scales at 10,000 pounds and got less than 10 miles per gallon. It was an early hit with Hollywood celebrities such as Arnold Schwarzenegger, who went on to own a fleet of Hummers. In December 1999, when the economy was strong and gas prices were relatively low, General Motors purchased the rights from AM General to market and distribute the Hummer. In 2002, the Hummer H2, a smaller, 8,600 pound version, and less expensive iteration of the original model went on sale.

2. IMDB lists 25 movies and TV shows in which a Hummer appears, but in only one did it play a feature role. What was that show?

3. Where, and in what military theaters was the Humvee first deployed?

3. The Humvee was used by the American military during the 1989 invasion of Panama and the Persian Gulf War in the early 1990s. 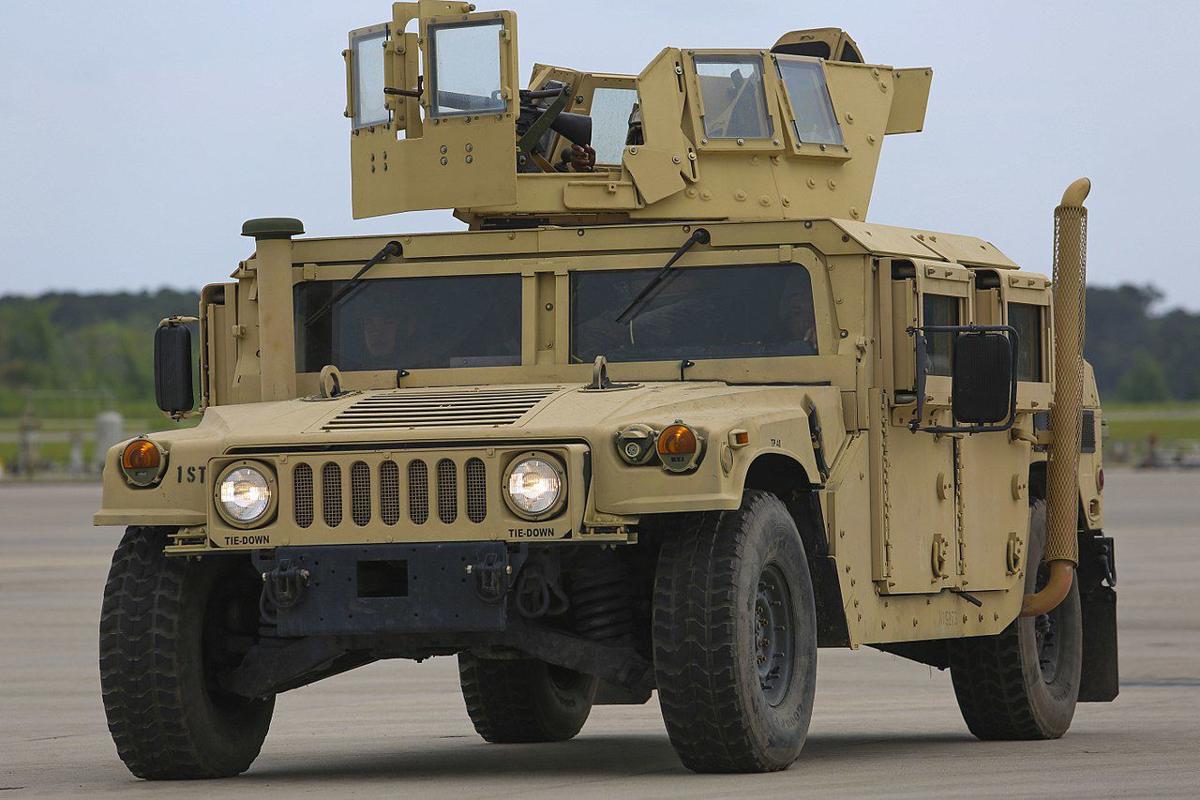 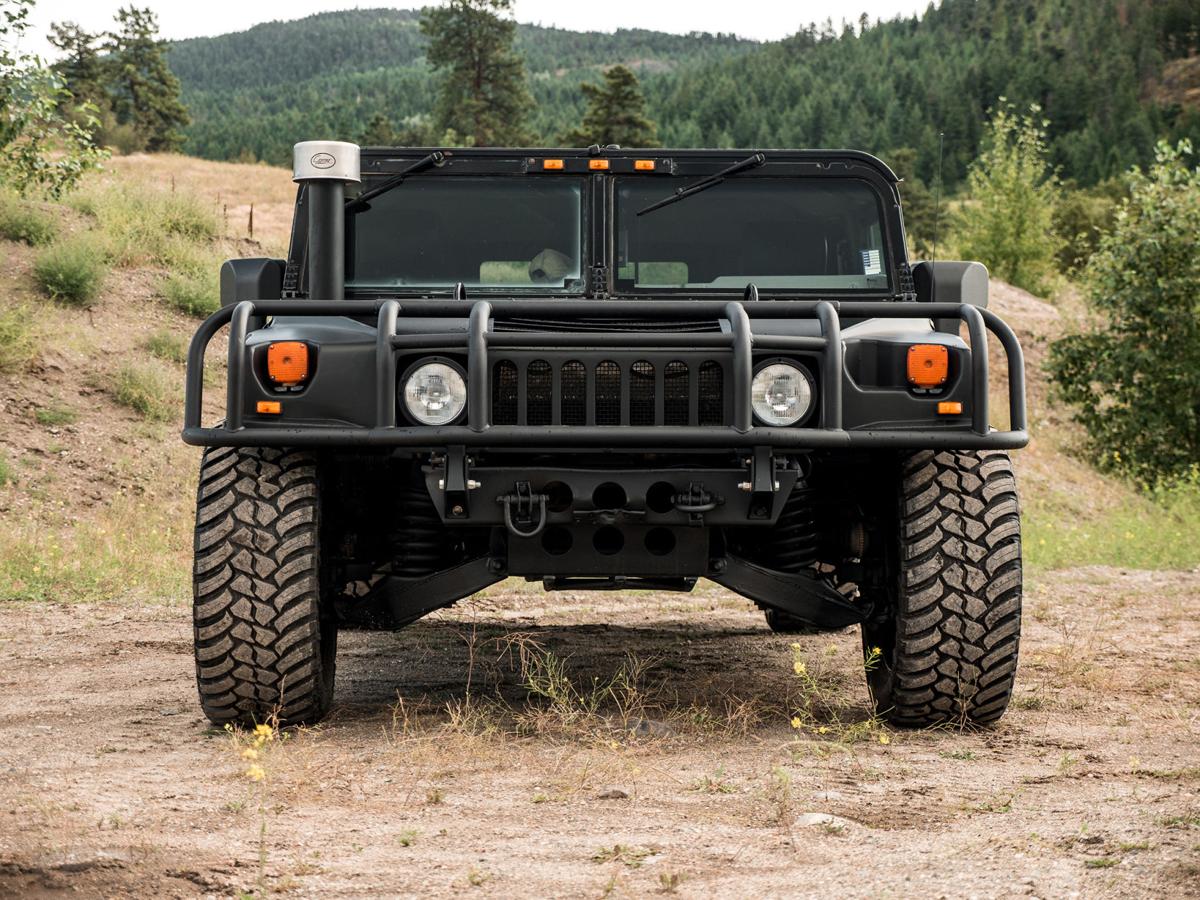 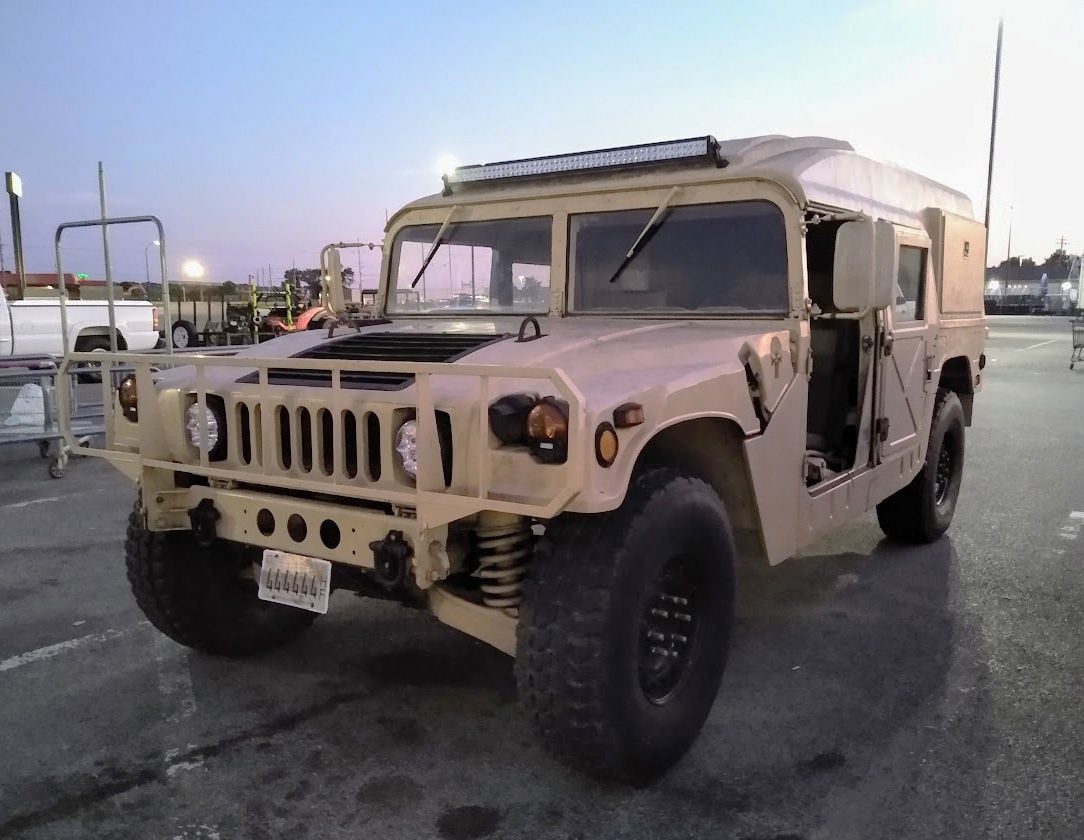 The Hummer H1 that I saw the other day in the Rural King lot, wasn’t equipped quite as aggressively as this Humvee military model, but the color was identical. Photo provided by Bruce Kunz