You might be a bit confused if you saw this car coming up in your rearview mirror and then passing you. Your first reaction may be, “gee, that looks like a ‘59 Dodge front end on a ‘59 Plymouth Fury back end!” Well, guess what? You would be absolutely correct!

If you’ve never heard of the 1959 Dodge Viscount, don’t feel like you’re the odd man out. I, too had never heard of this very rare car until I was surfing the web for inspiration for today’s column. As I stated in a recent story about a Canadian Ford, Chrysler also produced some unique vehicles just north of the border. Unlike Ford, however, who chose to change up trim on the front grilles, side sweep spears and rear taillights, and bright-work trim, Chrysler took an easier approach and literally bolted a Dodge front clip to a Plymouth Fury body (windshield to back bumper) and called it a day.

Chrysler Canada had been producing Canadian Dodges since 1951, all of which followed the established Dodge front clip/Plymouth from the firewall back approach. If you read the trivia questions first, you already know that the Regent was Canada’s Dodge which debuted in 1951.That model continued right through the 1959 model year. Stateside, Plymouth made Fury a separate model of its own for 1959. In the early years (1956-1958), the Fury was a sub-model of the Belvedere line.

Canadian Dodge engines, both straight six and V-8 models, were manufactured in Canada and were very similar to their American counterparts, with slight differences in displacement. The TorqueFlite automatic transmissions used the pushbutton selector as did the American models. Three-speed manuals were standard, however.

Although Chrysler products of the fifties were known for their strong engines and rugged automatic transmissions, they were, unfortunately plagued by serious premature rusting. Add to this the fact that sales of Chrysler products during this period, typically fell behind those of GM and Ford and the result is that these automobiles are very rare 60 years later. That is but one more reason Mopar fans love their cars.

For a fascinating and thorough story on the Dodge Viscount from a lady who owns one, visit mystarcollectorcar.com and search for Venessa McClement’s story along with many full-color photos including Venessa choosing which 45 rpm record she wants to put into her Highway Hi-Fi under dash record player! 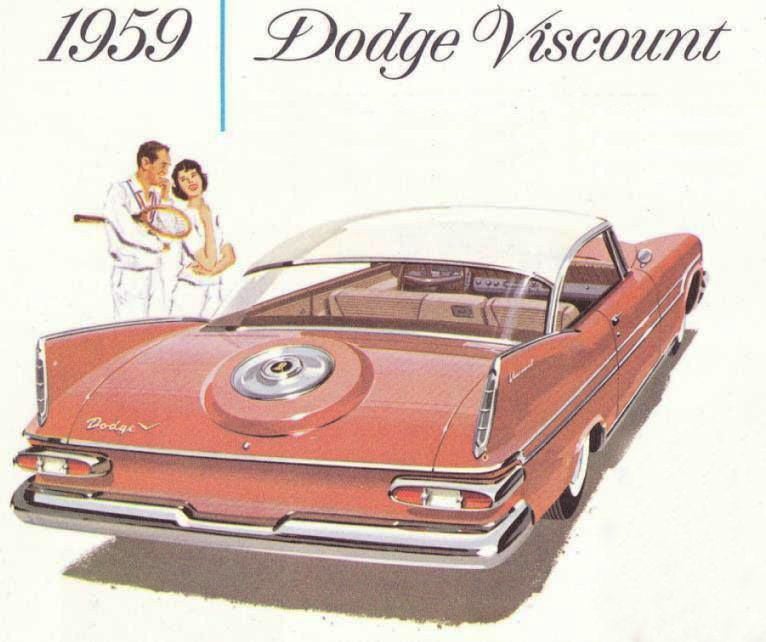 The cover page of the 1959 Dodge Viscount sales brochure. 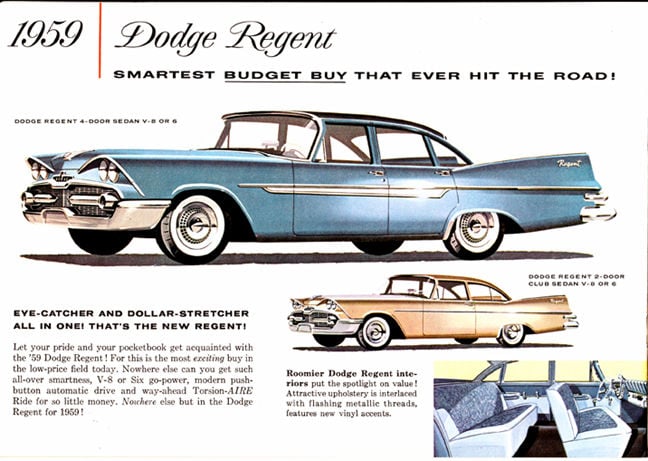 Here's a page from the 1959 Canadian Dodge sales brochure featuring the bottom-of-the-line Regent. 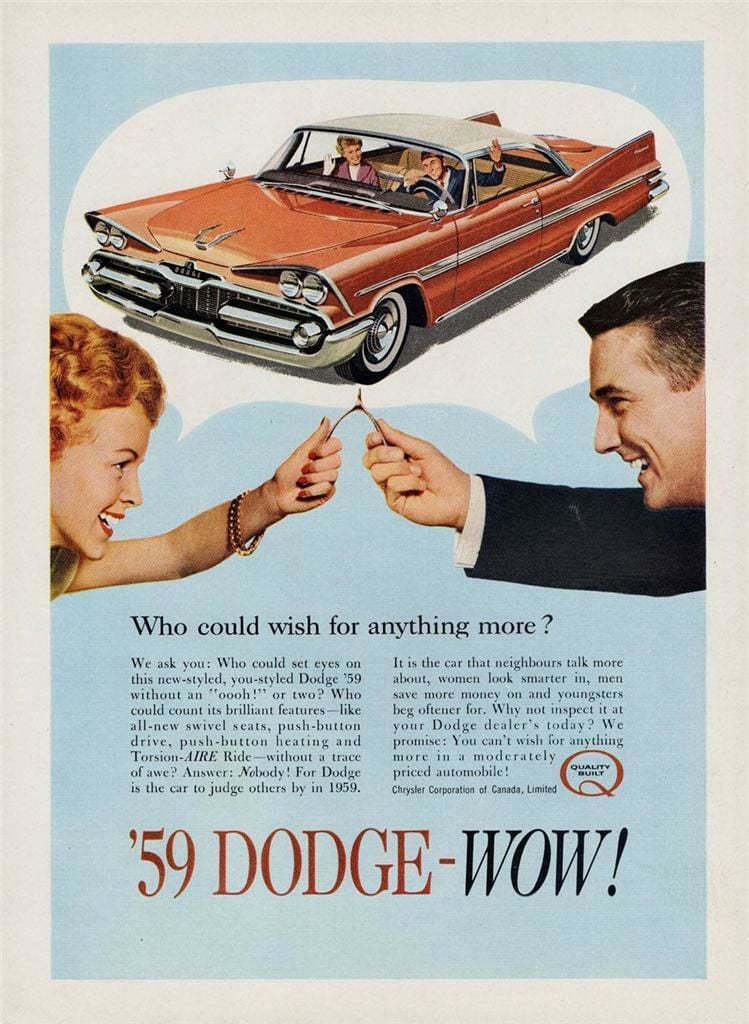 This magazine ad begs the question, "Who could ask for anything more?" It goes on to tout the benefits of the mid-line Dodge Mayfair. 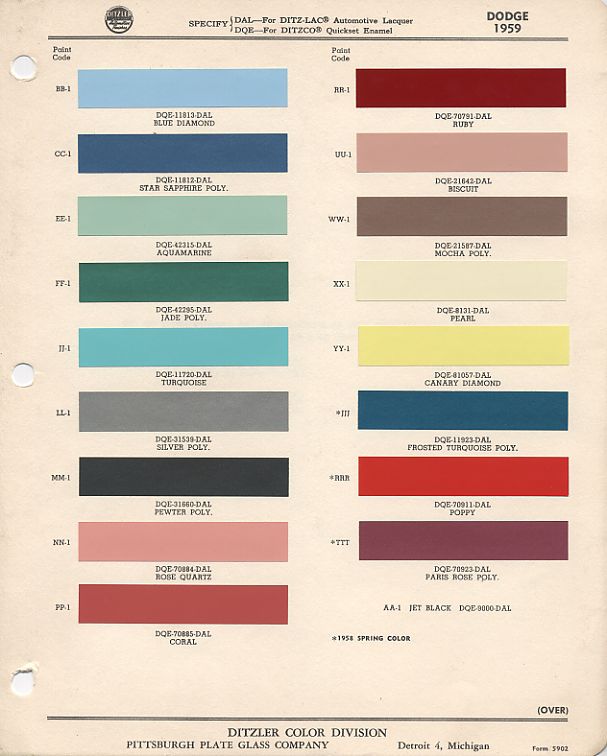 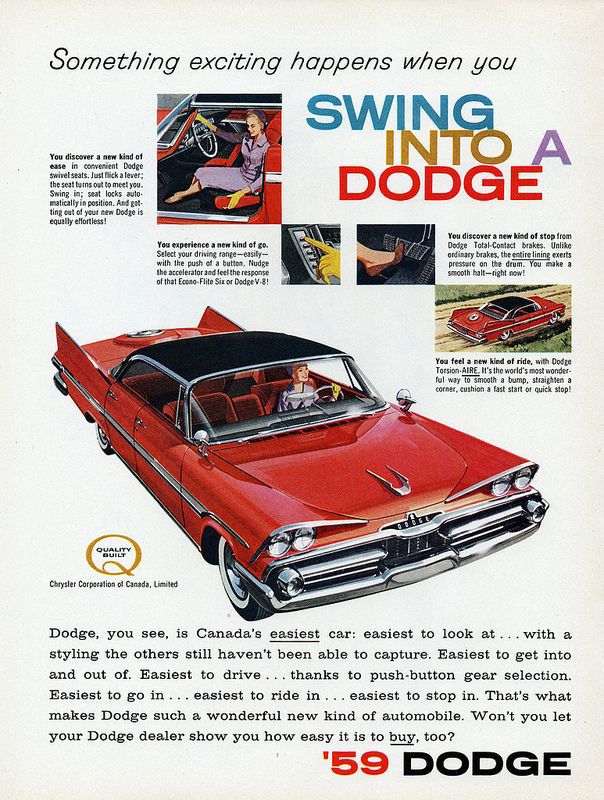 Red and black was a stunning combination for many auto manufacturers in the 50s. This Viscount is decked out in Jet Black over Poppy Red.

The cover page of the 1959 Dodge Viscount sales brochure.

Here's a page from the 1959 Canadian Dodge sales brochure featuring the bottom-of-the-line Regent.

This magazine ad begs the question, "Who could ask for anything more?" It goes on to tout the benefits of the mid-line Dodge Mayfair.

Red and black was a stunning combination for many auto manufacturers in the 50s. This Viscount is decked out in Jet Black over Poppy Red.

1. Chrysler produced two other Canadian-specific models from 1951 through 1959. Do you know the name of these models, built in their Windsor, Ontario plant?

2. Father’s Day was made a national holiday by which US president?

3. “Do you remember, When we met, That’s the day, I knew you were my pet...” were the lyrics to this 1959 top-40 hit song. What was the song’s name and who performed it? Phil Phillips; The Fleetwoods; Buddy Holly or Bobby Darin?

1. Mayfair was the mid-line Canadian Dodge in 1959 and the Regent was at the bottom of the heap.

2. 1966, President Lyndon B. Johnson issued the first presidential proclamation honoring fathers, designating the third Sunday in June as Father’s Day. Six years later, the day was made a permanent national holiday when President Richard Nixon signed it into law in 1972.

3. A true “one hit wonder”, “Sea of Love,” was the only top-40 chart song ever recorded by Phillip Baptiste, better known as Phil Phillips.

Being the people hauler it is, the 2021 Chrysler Pacifica seems sympathetic to the idea that mom and dad, on a long, hectic, kid-centric famil…

Content provided by The Saint Louis Science Center. A discovery of the scientific and engineering genius of the original Renaissance man, Leonardo da Vinci.

I’m feeling a bit 'gassy' this morning because in the past two weeks, I have attended two petroleum collectibles (“petroliana”) shows. The wee…

Chevrolet is in the process of retiring a host of passenger cars, Cruze, Volt, Impala and Camaro among them. It’s a move that fans of traditio…

My sojourn to Lebanon, Missouri and the 28th annual It’s a Gas! Petroliana swap meet was a winner as it has been for me every year since I sta…

2020 Lincoln Corsair: It can get pricey, but its looks, equipment, elegance and comfort are justifications

It’s a small wonder -- on a whole host of levels.