A stereotypical math classroom conjures images of a tangle of equations up on the board, students hunched over desks aligned in tidy rows and a stern teacher presiding over it all. This type of classroom does not belong to Brock Montgomery, a third-year math teacher at Parkway Northeast Middle School. In his eighth-grade pre-algebra and algebra classes, you’ll find comfy couches, word problems about giant cheeseburgers and the answer to the elusive question: When are we ever going to use this?

“Math is a difficult subject for most middle schoolers,” says his colleague, John Duvall. “Many, by this point, believe they are ‘not good at math.’ Mr. Montgomery has taken it upon himself to challenge this negative mindset head-on.”

In fact, math’s reputation as a difficult subject is what compelled Mr. Montgomery to teach it. “I hope to inspire a growth mindset in my students and remind them that we’re never a failure until we stop trying,” he says.

One way he keeps students invested is by demonstrating how math surrounds them all the time and makes a significant impact on their everyday lives. “I encourage students to scrutinize the world through a mathematical lens. So I never hear, ‘When are we going to use that?’ They just dive right in,” Mr. Montgomery says.

He has his students consider topics such as race and gender in Congress and how they correlate to the nation’s demo­graphics. He asks them to extrapo­late further and think about how these factors might affect how laws are made — and how those laws affect them.

He also illustrates math in more lighthearted terms. “I show them a huge picture of one hamburger bun with 100 patties and 100 slices of cheese,” Mr. Montgomery says. Students are then challenged to calculate how much the enormous burger would cost or its astronomical calorie count. “They ate that problem up — no pun intended.”

Mr. Montgomery has put a lot of thought into making his math class a place where kids want to be, right down to where they sit. Students might choose to sit on the available couch, loungers, lap desks or a seat from a car — a class favorite: They even buckle up. Mr. Montgomery figures that just as students have different ways of learning, they also have different ways of making themselves comfortable, and even something as basic as how and where they study can make a profound difference.

In turn, teaching has made a profound difference on his life. “There are so many things that inspire me. First and foremost, it’s the kids and their resilience to get up every morning and give it their best, no matter what might be going on at home. That’s the main inspiration I have. Second, it’s my colleagues. My fellow math teachers, my eighth-grade team, the principal — it’s a phenomenal environment. Great coworkers can change a school.”

In fact, he relied on a coworker to confirm that the email saying he’d been chosen as the St. Louis Post-Dispatch’s Teacher of the Month was legit. “Honestly, I thought it was spam or a joke,” he said. Much to his surprise, it was real. Mr. Montgomery’s awards from local businesses including First Community Credit Union, Elco Chevrolet, Kenrick’s Meats & Catering, Penn Station East Coast Subs and Purina Farms total nearly $1,000.

Colleague Mr. Duvall says Mr. Montgomery’s math class is one that he wishes he could have taken. “By blending mindfulness, flexible seating, engagement strategies and strong relationships with students, Mr. Montgomery is changing the typical math experience for his students for the better.” And though the world brings with it a slate of complex equations, it’s teachers like Mr. Montgomery who give kids the confidence to try and solve for X. 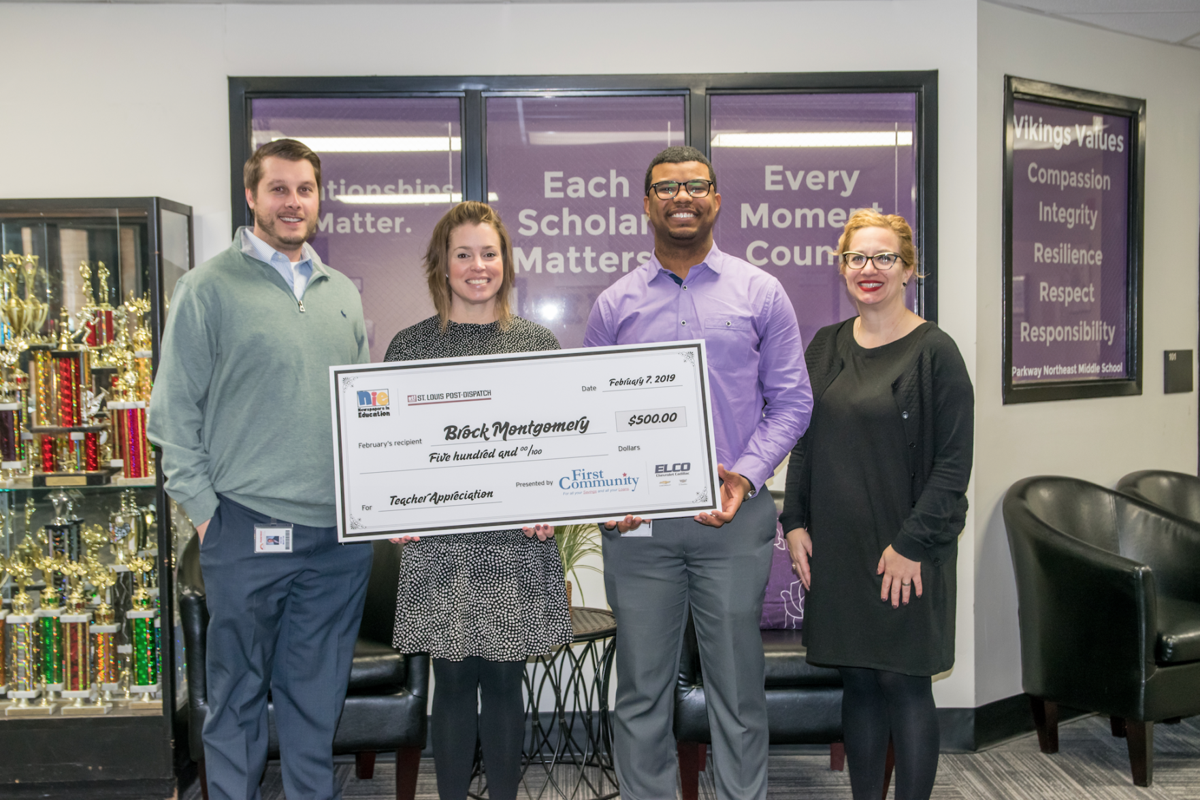