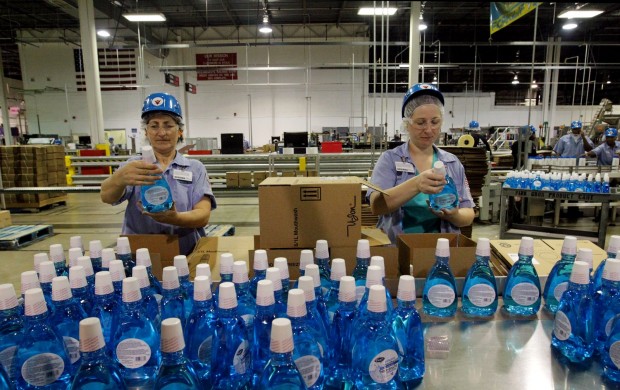 AUG. 12, 2010 - From left to right, line workers Merka Memisevic and Amela Salic package mouthwash off an assembly line at the Vi-Jon Inc. Thursday afternoon. Vi-Jon Inc. is just one of the areas businesses that has recently adopted Lean Manufacturing, the business philosphy emphasizing effeciency and cutting waste in the workplace. For example, in order to increase production on the assembly lines, the company outlined where materials should be placed on the floor by painting blue squares on the ground. Laurie Skrivan | lskrivan@post-dispatch.com 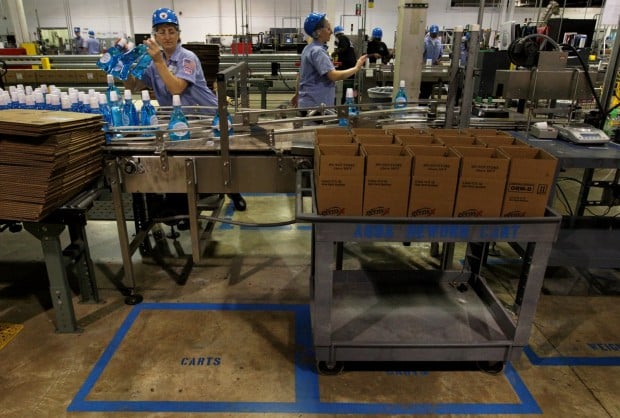 AUGUST 12 2010 - From left to right, line workers Merka Memisevic and Amela Salic package mouthwash off an assembly line at the Vi-Jon Inc. Thursday afternoon. Vi-Jon Inc. is just one of the areas businesses that has recently adopted Lean Manufacturing, the business philosphy emphasizing effeciency and cutting waste in the workplace. For example, in order to increase production on the assembly lines, the company outlined where materials should be placed on the floor by painting blue squares on the ground. Laurie Skrivan | lskrivan@post-dispatch.com
BY LISA BROWN • > 314-340-8127

Companies throughout the U.S. have been using lean manufacturing principles dating back three decades to wring out excess costs and waste, and reduce inventory. But the down economy has prompted many companies to embrace lean with renewed vigor.

Some St. Louis area companies such as Sigma-Aldrich and Tacony Corp. are expanding their initiatives, and others are adopting the strategy for the first time.

"It's being implemented much more aggressively across the board," said George Friesen, business practice leader for St. Louis Community College's lean leadership certification program. "It's increasing very rapidly because it drives productivity. The economy has really put a full court press on companies to get it done."

Vi-Jon, the St. Louis County-based maker of Germ-X hand sanitizer, is turning to lean for the first time in the privately held company's 102-year-history. The company produces hundreds of private-label health and beauty products, from mouthwash to aftershave.

Chief Operating Officer Tim Williams, who previously managed lean initiatives at MillerCoors in Virginia and SABMiller in India and Russia, was hired in May to work with Vi-Jon's five manufacturing plants and distribution facilities in St. Louis and Tennessee.

The company is seeking to improve efficiency after years of growth.

"As we've grown, we've noticed that because of our size, things have become less efficient, not more efficient," Williams said.

Vi-Jon created a value chain map, a tool that spells out a company's processes from order to delivery. That exercise helped Vi-Jon identify that it took an average of 85 days from when a customer placed a new order until the time it was delivered, yet only 14 hours of value-added work went into making the product.

Vi-Jon is now changing the layout of its manufacturing equipment and where materials are situated on the shop floor, with a goal of cutting new-order deliveries down to two weeks.

And more companies are making such changes as well.

In its annual manufacturing report released in June, consulting firm RSM McGladrey found that 65 percent of the more than 900 manufacturing and wholesale distribution companies it surveyed nationwide planned to use lean this year, up from 61 percent surveyed in 2009 and 56 percent in 2008.

Lean principles were pioneered by Toyota in the mid-20th century and began gaining momentum in the U.S. in the 1980s. Some trace them back to automotive entrepreneur Henry Ford, who wrote a century ago about eliminating waste on the production line.

"As companies gear up to support a rebounding economy, they're questioning how they do things and engaging the entire workforce to come up with ideas to make the business stronger," said Robert Martichenko, who has written several books on the topic and is CEO of consulting firm LeanCor in Florence, Ky.

At Tech Manufacturing in Wright City, white taped squares on the concrete floor show where lean is in play at the company, which makes aluminum and titanium component parts for Boeing, Lockheed Martin and Lear Jet. Each white square represents where a pallet holding materials should be.

"If the pallet is empty, there's no raw material, and that's an inefficiency," said President and CEO Chuck Stout.

Stout began researching lean principles in 2006, a few years after he and other partners bought the company, but didn't begin using them until 2008 when he divided the plant floor into eight areas where each cell has all the equipment and materials to make a part.

"It has given us a very simple, visual set of procedures and a system that everyone can understand and participate in," Stout said.

Some companies that have found success using lean principles for years are expanding them throughout their operations.

Sewing machine sales are up 25 percent this year at Tacony Corp.; the boost in business is prompting the company, based in Fenton, to apply past lessons it has learned.

The company changed from long production lines to multiple small clusters of workers and equipment. It switched to a system that keeps bins filled with screws and bolts near the areas needing those parts.

It also adopted the concept of demand flow, in which products are built based on what the company sold the day before, instead of using sales staff forecasts.

"We're now able to see what we sold yesterday and manufacture that tomorrow," said Bill Hinderer, the company's president.

Sigma-Aldrich Corp., based in St. Louis, and Barry-Wehmiller, based in Clayton, have facilities around the globe, and both were introduced to lean principles through acquisitions.

Sigma-Aldrich, a life science and high tech company with $2.1 billion in revenue in 2009, acquired Supelco, a Pennsylvania chemical company, in 1993. Once the acquisition was finalized, Sigma-Aldrich began spreading the principles Supelco used in its manufacturing processes and has since introduced lean concepts at its more than 100 facilities in 40 countries. Last year marked the eighth consecutive year Sigma-Aldrich had at least $15 million in pre-tax savings as a result of what it calls process improvement.

"It is woven into the fabric of our company," said Deborah Slagle, vice president of operations of Sigma-Aldrich's Research Biotech business unit. "It's in our DNA."

The biggest impact has been empowering its 7,600 employees to generate ideas to improve their work environment, said Joe Scherer, Global Director of PI for Sigma-Aldrich.

The company has an idea board where employees make suggestions on ways to cut costs and increase efficiency. They decide which ideas will work, and the ideas are tracked.

"The best ideas are the ones where we say, 'Why didn't we think of that before?'" Scherer said. Scherer leads a team out of his office near downtown St. Louis that oversees lean principles companywide. Sigma-Aldrich is ramping up its internal leadership team: The company went from 11 local process improvement leaders in 2009 to 48 this year.

Bob Chapman, chairman and CEO of Barry-Wehmiller, said empowering employees should be the primary goal of lean. He first learned of the business philosophy when his company, which had $976.9 million in revenue in 2009, acquired Ward Machinery Co. in 2002.

"In the first year or two, we thought it was interesting, but we weren't fully aware of the potential of it," Chapman said.

Now lean principles are followed throughout Barry-Wehmiller's nine divisions in the U.S. and Europe, which has meant redesigning manufacturing lines so all equipment and materials are organized efficiently. Barry-Wehmiller's 5,500 employees are encouraged to suggest changes to improve processes.

"We learned as managers to tell people how to do things, but we never learned to ask them how to do it better," Chapman said. "Lean affects morale, financial performance and customer perception. It affects everything."

For many large companies such as Boeing and GM, being lean has become an integral part of their operations for decades.

But costs to train employees can serve as a barrier to smaller companies, said Harold Zinn, vice president of communications at Missouri Enterprise, a nonprofit that provides companies statewide with business and technical assistance, with a focus on lean principles. The organization is based in Rolla and is funded by federal and state grants and client fees.

Next month Missouri Enterprise offers its course on Six Sigma, a statistical analysis to eliminate defects that is often used in conjunction with lean. The course costs about $3,000; about 10 people will attend, the same number as attended last year.

The state provides grants to companies to offset the costs of training through the Missouri Customized Training Program, administered by the Department of Economic Development.

Zinn estimates that at least half of the manufacturing companies in Missouri use lean principles, but no statewide data exist that track it.

"Lots of companies recognize that they need this to prepare for when the economy turns around," Zinn said.

Editor's note: The story was updated to CORRECT the amount of Barry-Wehmiller's 2009 revenue, which was $976.9 million, in the 33rd paragraph.

Nicklaus: No relief in sight for investors betting on higher interest rates

As 2010 began, plenty of market soothsayers were talking about a bond bubble. Interest rates were just too low, they said, and would surely ri…

Larry Swedroe got an MBA with the idea that he'd manage money on Wall Street. He spent a couple of decades working for the likes of Citigroup …

In 1986, the Metropolitan St. Louis Sewer District accounted for more than a quarter of Insituform Mid-America's revenue. Last year, MSD made …

Goldman Sachs Sees Oil Heading to $100 a Barrel by 3Q

AUG. 12, 2010 - From left to right, line workers Merka Memisevic and Amela Salic package mouthwash off an assembly line at the Vi-Jon Inc. Thursday afternoon. Vi-Jon Inc. is just one of the areas businesses that has recently adopted Lean Manufacturing, the business philosphy emphasizing effeciency and cutting waste in the workplace. For example, in order to increase production on the assembly lines, the company outlined where materials should be placed on the floor by painting blue squares on the ground. Laurie Skrivan | lskrivan@post-dispatch.com

AUGUST 12 2010 - From left to right, line workers Merka Memisevic and Amela Salic package mouthwash off an assembly line at the Vi-Jon Inc. Thursday afternoon. Vi-Jon Inc. is just one of the areas businesses that has recently adopted Lean Manufacturing, the business philosphy emphasizing effeciency and cutting waste in the workplace. For example, in order to increase production on the assembly lines, the company outlined where materials should be placed on the floor by painting blue squares on the ground. Laurie Skrivan | lskrivan@post-dispatch.com
© Copyright 2023 St. Louis Post-Dispatch, 901 N. 10th St. St. Louis, MO 63101 | Terms of Use | Privacy Policy | Do Not Sell My Info | Cookie Preferences
Powered by BLOX Content Management System from TownNews.com.
You don't have any notifications.