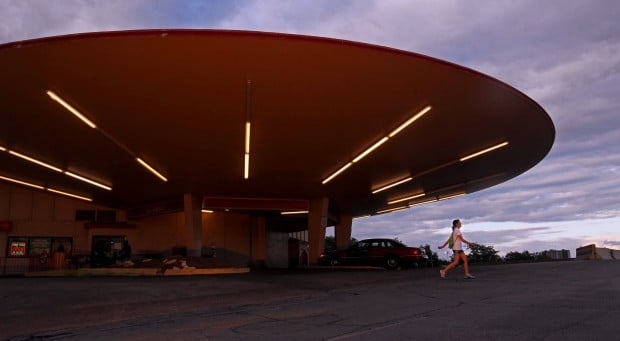 The former Del Taco building on March 7, 1969, shortly after it opened as a gas station. Photo by Floyd Bowser of the St. Louis Post-Dispatch 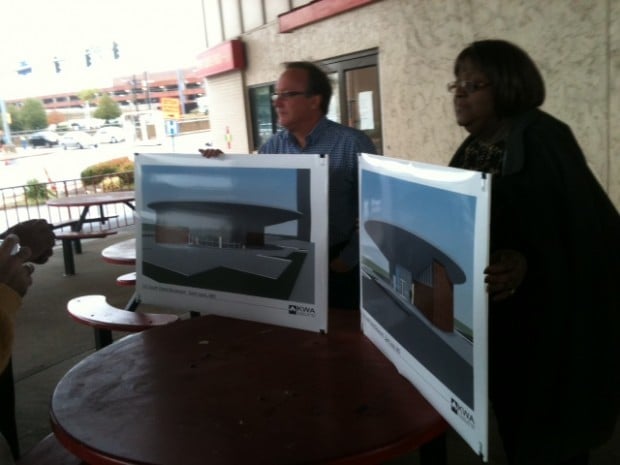 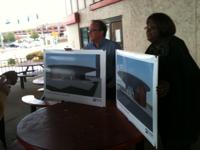 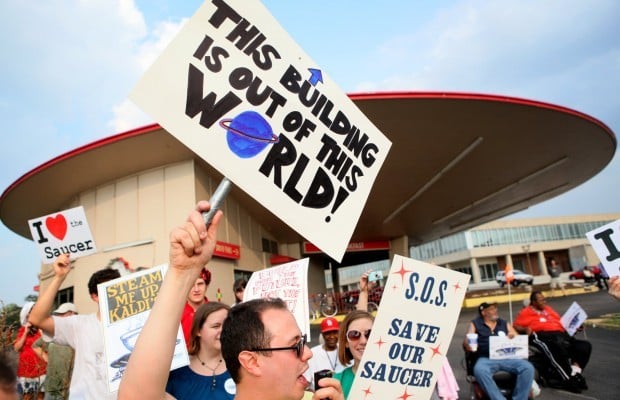 ST. LOUIS • Developer Rick Yackey said Wednesday that he hopes to re-open the shuttered former Del Taco building in midtown by March, and that he's in final negotiations with two tenants to occupy it.

In a brief public meeting under the building's now-infamous flying saucer roof, Yackey showed off renderings of his planned renovations and said he thinks he'll have a cost estimate within the next two weeks.

His plans include adding small additions to the sides of the building, replacing Del Taco's Mission-style outside with brick and installing floor-to-ceiling windows in front, as the building had in its original incarnation as a Phillips 66 gas station, circa 1968.

As for occupants, Yackey wouldn't name names, but said he's "down to the last chartstrokes" with two: a coffee shop and a "food service" establishment. He hopes to close the deals within 60 days and have the building occupied by March, when the nearby Grand Boulevard viaduct re-opens to traffic.

"It's actually going to be a great adaptive reuse," he said. "And it will stop what was going on here with crime and problems."

In an unexpected twist, the building's original architect, Richard Henmi, showed up for the small gathering. He and Yackey had never met before, and Henmi admitted being "somewhat" disappointed when he learned of Yackey's former plans to demolish the building — one of many he designed around St. Louis.

But Henmi gave a thumbs-up to the new plan.

"I like it," he said. "It pretty much keeps the original intent."

The decision came after SLU made public a plan for a $75 million surgical center on the Pevely site.

Digging underway at the midtown site.

Starbucks opens in historic building near St. Louis U.

Could there be a java spot, a pizza place in Del Taco's future?

Mayor Francis Slays says Kaldi's. Lewis Reed, president of the St. Louis Board of Alderman, says he's been in talks about possible restaurant with Pi Pizzeria.

Owner of old Del Taco building says he will try to attract a tenant to keep the design’s integrity.

Some rally to save flying saucer-shaped purveyor of 99-cent bean and cheese burritos.

The former Del Taco building on March 7, 1969, shortly after it opened as a gas station. Photo by Floyd Bowser of the St. Louis Post-Dispatch