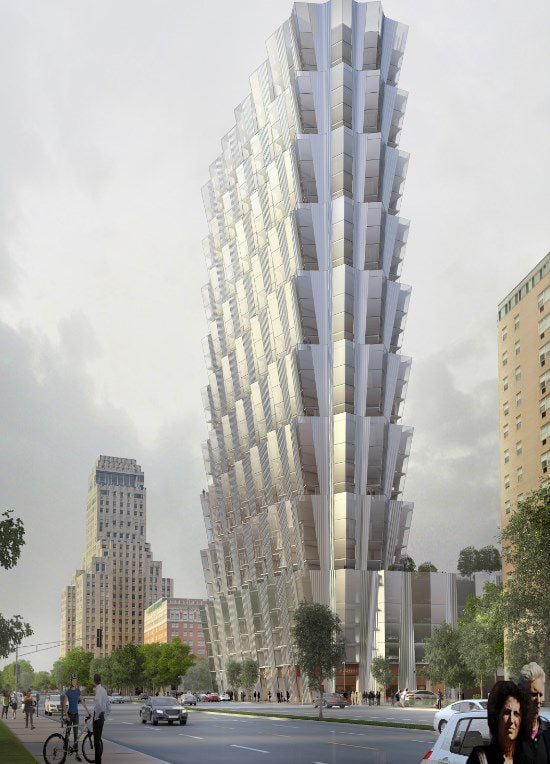 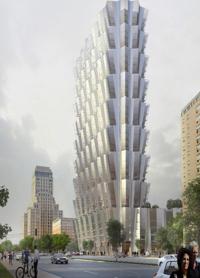 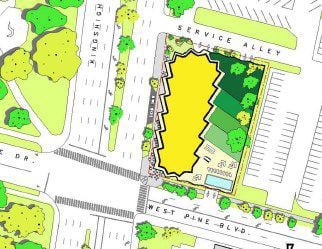 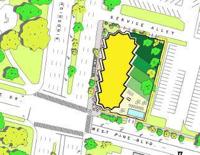 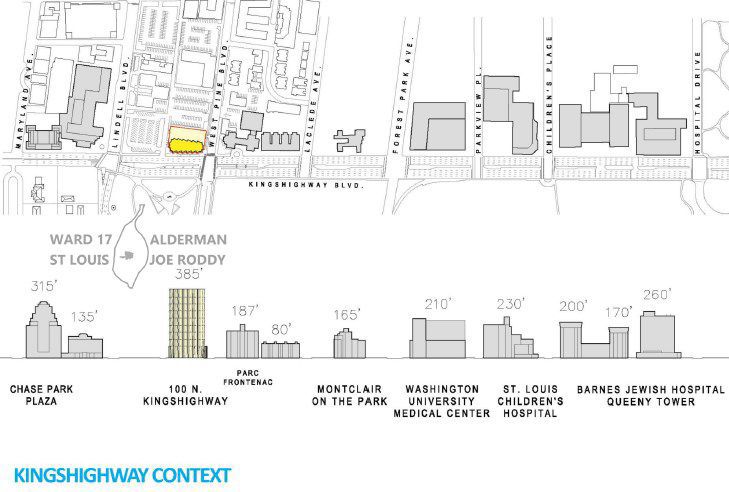 One Hundred profile on Kingshighway (Image from Studio Gang) 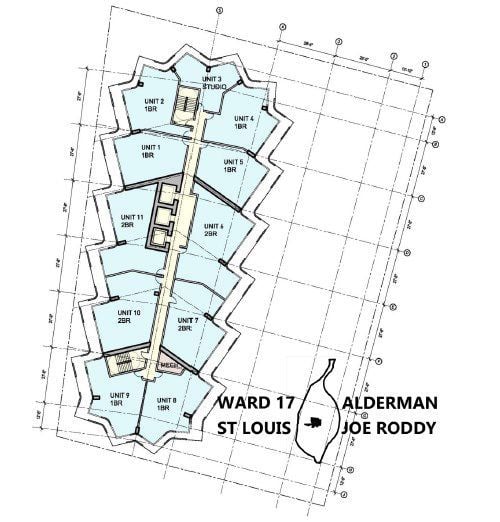 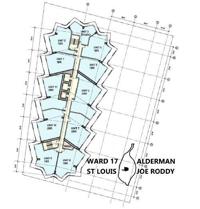 “Stacked Cups,” one commenter called it on urbanstl.com. “Magazine Rack,” wrote another.

The references were to One Hundred, the tiered, 36-story apartment tower planned for a St. Louis site on Kingshighway next to Forest Park. The urbanstl.com commenter who came up with Stacked Cups said One Hundred deserves a nickname as much as London skyscrapers with nicknames of “Gherkin,” “Shard,” “Cheesegrater” and “Walkie Talkie,” also known as “Fryscraper.”

Nicknames for One Hundred began emerging online 30 minutes after the Post-Dispatch, on stltoday.com, revealed plans for the $130 million project on Dec. 8.

Mac Properties, One Hundred’s New Jersey-based developer, hired Studio Gang to design the tower, which would be the city’s tallest residential building. Jeanne Gang, the firm’s founding principal, is among the few celebrated architects to work in St. Louis since Eero Saarinen designed his 630-foot stainless steel sculpture completed on the riverfront in 1965.

Following Saarinen to St. Louis were Philip Johnson, whose 1970s General American Life headquarters is now home to Spire (formerly Laclede Group), and David Chipperfield, the British architect of the St. Louis Art Museum addition opened in 2012. Decades before Saarinen, there was Louis Sullivan, whose Wainwright Building downtown is the granddaddy of skyscrapers. With the Wainwright, completed in 1891, Sullivan showed how to design tall buildings to indicate they have steel-frame skeletons.

In a telephone interview last week, Gang pointed out that another renowned architect to work in St. Louis is Tadao Ando, whose concrete Pulitzer Arts Foundation museum opened in 2001.

Gang — a 2011 winner of a $500,000 MacArthur Fellowship, known unofficially as a “genius grant” — leads the 85-person, international design firm based in Chicago with an office in New York. Her best known project is Aqua Tower, an 82-story building near the Chicago lakefront.

One Hundred, on North Kingshighway at West Pine Boulevard, is intended to give residents wide views of Forest Park to the west and Saarinen’s Arch to the east. All 305 apartments are designed to have a corner living room to maximize interior daylight. Its facade of sloped glass is intended to enhance residents’ views and save energy. Tiers of four stories repeat over the height of the building, with the facade’s angles producing outdoor terraces for a fourth of the apartments.

The design press already has taken notice. Articles about One Hundred have appeared in World Architecture, ArchDaily, designboom and Architecture, the journal of the American Institute of Architects.

Juliane Wolf, a Studio Gang design principal, led One Hundred’s design. At a neighborhood meeting Alderman Joe Roddy organized to publicize the project, Wolf told the overflow crowd Monday night at the Schlafly branch library that despite its height, One Hundred’s design takes pedestrians into account with sheltered sidewalks and a street-level corner cafe with covered outdoor seating.

Eli Ungar, the company’s founder, told the library audience he realized not everyone will like One Hundred’s strikingly modern design but said he believes it will eventually be admired as much as the Central West End’s stately old apartment buildings.

Based on its previous projects with Studio Gang, Mac Properties turned the design firm loose on the Kingshighway site. Mac Properties has owned the site, currently a parking lot, for years.

“We’ve spent a lot of time imagining what belongs there,” Ungar told the crowd. “We started with a do-no-harm dictum.”

Mac Properties is seeking from the city 15 years of property tax abatement that would total about $10 million. Without the subsidy, One Hundred makes no sense financially, he said. The city’s Land Clearance for Redevelopment Authority voted this week to support the tax abatement. The subsidy still needs final city approval.

Ungar said he hopes to begin One Hundred’s construction within a year and welcome the first residents in spring 2019.

Some Central West End residents don’t want the project. Too tall, too out of place, too much taxpayer help, they said online. Among the initial skeptics was Bill Hannegan, a Lindell Boulevard resident who said his family has lived next to Forest Park since the 1940s. He said Roddy and Ungar won him over during their presentation at the Schlafly library.

“Though I still feel a traditional rather than a modern building would be more in keeping with the aesthetic of Forest Park, Alderman Roddy and developer Eli Ungar at the meeting convinced me that tax abatements are justified for this project and that Unger’s firm is committed to St. Louis long term,” Hannegan said.

Another architectural mistake for St. Louis

I don’t get this city. Why is it that we can’t hit the big ball when it comes to architecture? I am referring to our recent blunder, the One H…

One Hundred site not always a parking lot

A hotel occupied the Kingshighway site for about 70 years

One Hundred profile on Kingshighway (Image from Studio Gang)