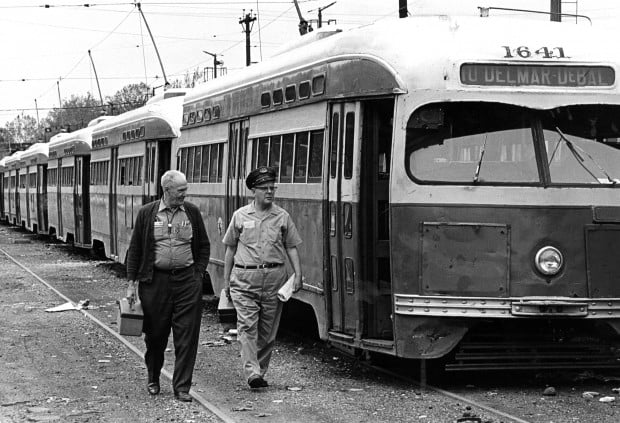 Jake Herin (left) and O.H. Deuchert get ready for their shift on May 21, 1966, the last day of streetcar service in St. Louis. Both men had been streetcar motormen their entire careers. Herin had the sad honor of taking the evening's last run. (Post-Dispatch)

Downtown St. Louis boosters envision the construction of a seven-mile streetcar system as a catalyst for economic development between downtown and the Central West End.

Maggie Campbell, president of the Partnership for Downtown St. Louis, said Monday that a combination of federal funds and a new tax on property near the lines could fund the project. Cost estimates are $219 million for tracks and overhead electric lines to power modern streetcars or $270 million to add more elaborate streetscapes along the routes.

Supporters project the system could produce around $540 million in economic development along its two proposed lines over its first five years of operation. They offered no details on how they determined that figure.

The idea for the project resulted from St. Louis University’s decision, announced last year, to move its law school from midtown to downtown, Campbell told the Post-Dispatch editorial board. SLU’s initial plan to run shuttle buses between the new law school on Tucker Boulevard and its midtown campus quickly turned to discussion of streetcars instead, she said.

URS Corp. has done a $200,000 streetcar feasibility study that was paid for by the downtown partnership. The public will get its first detailed look at the proposal at a presentation to be held at 4 p.m., March 7, at the Moto Museum, 3441 Olive Street.

Property owners near the lines would have to approve any proposed tax increase. Supporters also hope that SLU and other nonprofit organizations will contribute to the project.

Renee Ducker, a transit planner for URS, told the Post-Dispatch editorial board the study projects 7,700 daily riders. The estimate includes 2,700 riders new to public transit, although much of overall streetcar ridership would likely come from existing bus service.

“We do feel there would be some shifting of riders to our system,” she said.

Although slower than MetroLink trains, the streetcars’ 10-minute frequency of service and numerous stops would provide the connectivity needed to promote commercial and residential development, Ducker said.

The earliest the streetcars could be in operation is 2016. Proposed are two lines with 50-passenger streetcars that, like their St. Louis predecessors of decades ago, would mingle with regular traffic along most of their routes. The city’s streetcar service was ended in 1966.

One line would loop on a single track through the middle of downtown to Kiener Plaza. West of 14th Street, the line would use two sets of tracks along Olive Street and Lindell Boulevard through Grand Center to Taylor Avenue and the Central West End MetroLink station. An alternative is a single-track loop on Euclid Avenue and Forest Park Avenue.

Unless later expanded, the downtown streetcar line would not connect to the Loop Trolley, the two-mile rail line designed to run between the Delmar Loop and Forest Park. Construction could begin soon on the $43 million Delmar trolley, financed largely by a nearly $25 million federal grant initially approved in 2010.

Campbell said Metro transit officials had yet to take a position on the streetcar proposal. She said the proposal calls for “seamless” connections between new streetcars and MetroLink trains.

Next up for the streetcar project is an environmental impact study. Campbell said her group hopes to raise about $300,000 for a study that could cost more than $1 million.

Readers of the Post-Dispatch may have seen that the Partnership for Downtown St. Louis is now proposing streetcars ("Streetcar proposed to lin…

Public gets a look at St. Louis streetcar proposal

The main line would link downtown and the Central West End.

I agree with the letter from Bill Kasalko ("Streetcars would hurt growth in residential areas," March 5) about dampening the enthusiasm for st…

Downtown Partnership boss to step down

Campbell leaving after three and a half years on the job

Unconscionable! That's the best word I can summon to describe the actions of Elsie Glickert and the other named plaintiffs who seek to undermi…

Along for the Ride: A revival of a St. Louis streetcar system

Advocates are pushing for an initial seven-mile route

A look back at the end of streetcar service in St. Louis

Jake Herin (left) and O.H. Deuchert get ready for their shift on May 21, 1966, the last day of streetcar service in St. Louis. Both men had been streetcar motormen their entire careers. Herin had the sad honor of taking the evening's last run. (Post-Dispatch)