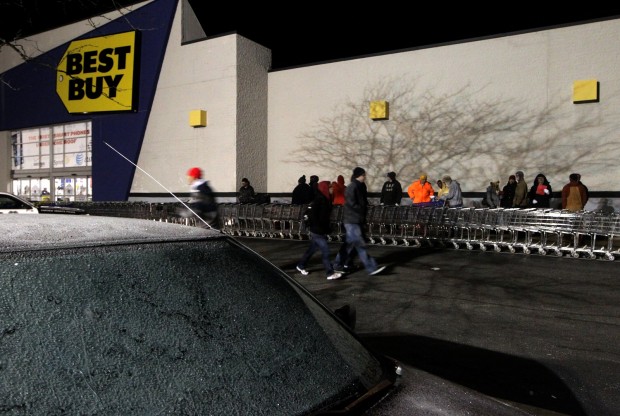 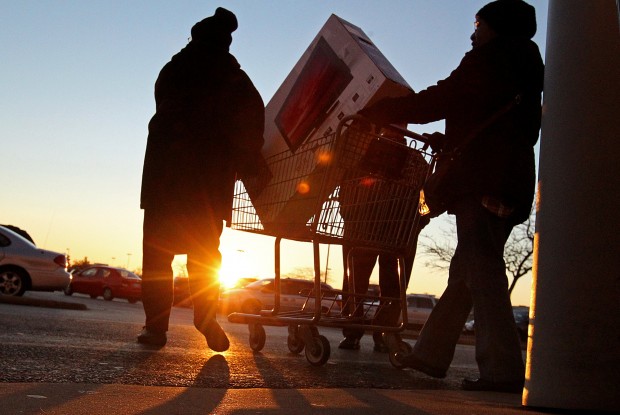 Lyndsey Shaw has been on the front lines of Black Friday in years past, helping to open the Best Buy store in Brentwood by 5 a.m.

But when Best Buy decided to follow other retailers this year in moving up its opening time to midnight on Thanksgiving, Shaw worried she would have to miss her family's tradition of going out to see Christmas lights after their holiday dinner.

"We don't usually get everything cleaned up and out the door until 10 p.m.," she said.

Fortunately, her supervisor allowed her to work a Friday afternoon shift instead.

But with several other retailers, including Macy's, Kohl's and Target, also opening at midnight for the first time, a groundswell of protest has been brewing among people who worry that not all retail employees will be as lucky and that some will have to skip out early on family gatherings.

And moreover, critics assert, the earlier opening times are encroaching too much on a holiday that should be reserved for family — not for shopping.

Ellen Davis, a vice president for the National Retail Federation, pointed out that other workers — including movie theater and some restaurant employees — already work that holiday.

"Their employees aren't up in arms about it," she said. "It's almost ironic that on Thanksgiving, people are complaining about having a job."

And if consumers don't like it, then they don't have to go shopping that day, she added.

For those who do, most shopping malls in the region will also open at midnight to accommodate stores that want to pull all-nighters.

So have retailers finally taken Black Friday creep too far?

Jane Charbonneau thinks so. The Creve Coeur resident recently signed an online petition on Change.org that asks Target to push back its opening time to 5 a.m. The petition, which was started by a Target employee in Nebraska, has garnered more than 100,000 signatures.

"To me, it's just the principle," said Charbonneau. "We only have so many holidays in the year. I'm a very family-oriented person. I think it's only fair for the employees to have some time off for the holidays."

As it is, her family may have an earlier Thanksgiving meal than usual so her two children who work retail jobs can get to sleep and report to work around 4 a.m. on Black Friday, she added.

But in their defense, retailers say they are just trying to better serve shoppers who would prefer to shop at night rather than having to wake up in the pre-dawn hours on Black Friday.

"We have heard from our (customers) that they want to shop Target following their Thanksgiving celebrations rather than only having the option of getting up in the middle of the night," Molly Snyder, a Target spokeswoman, said in an email.

She added that Target does its best to work around the schedule requests of employees and offers holiday pay to all hourly workers on Thanksgiving.

Adrienne O'Hara, a Toys R Us spokeswoman, wrote in an email that the response to its 10 p.m. opening last year was "overwhelmingly positive."

In addition to allowing families to get a jump start on holiday shopping, it helps the store better manage crowds and traffic, she said.

Defenders also note that shopping is often a family-oriented activity so it doesn't necessarily clash with the spirit of the holiday. And the midnight sales are apparently more appealing to the younger generation.

Shoppers in the 18 to 34 demographic were twice as likely to shop at midnight on Thanksgiving last year as other age groups, said the NRF's Davis.

"It should come as no surprise that young adults want to stay up late rather than to wake up early," she said, adding that Kohl's, Target, Macy's and others opening at midnight 'see the young adult crowd as the apple of their eye."

The 35-plus crowd, by contrast, is more likely to arrive at stores starting around 7 a.m. on Black Friday, she said.

But being open on Thanksgiving hasn't always proven to be a hit with retailers — at least when it comes to the morning hours. Sears, for example, opened its stores from 7 a.m. to noon on Thanksgiving last year for the first time. The idea was that many people have to work on Black Friday, so they might want to shop on the holiday. But the company decided not to repeat it this year.

"What we heard from the customer was that they really like to keep their traditional Thanksgiving Day with their families," said Tom Aiello, a company spokesman.

But Kmart, which is part of the same company as Sears, will once again be open on Thanksgiving Day, as it has been for 20 years. So why the discrepancy between the two stores?

"It's almost a part of some families' traditions," Aiello said. "Customers count on us for being open that day" for last-minute household or food needs.

The company fills most — though not all — of the shifts with volunteers. And, he added, many employees like working that day because of the "festive holiday spirit" in the store.

Big Lots, Walgreens and some Old Navy stores are examples of others that are open during the day on Thanksgiving.

Michael Niemira, chief economist for the International Council of Shopping Centers, is not convinced that the longer Black Friday hours and midnight openings are such a good idea.

"I'm not sure how successful it will be," he said. "I think it just shifts sales instead of adding incremental business."

It may bolster sales on that weekend, but that may lead to a bigger lull in sales the following week, Niemira said.

But it's nonetheless a strategy that many retailers have been adopting — albeit reluctantly in some cases.

Some stores are hoping to lure in shoppers this weekend instead of waiting one more week. Check out the early specials and keep tabs on our St…

Are you fed up with Black Friday?

Many stores and malls will open at midnight, but not all shoppers and employees seem thrilled with the idea.

Heading out on Black Friday? Tag your tweets and photos with #blackfridaySTL, and follow that hashtag for tips from others.

Die-hard bargain shoppers might want to cut back on the turkey this year. Many Black Friday sales are starting on Thanksgiving Day. Follow our…

Best Buy released a statement today explaining why it decided to open at midnight on Thanksgiving. It's not really an apology, but it does ex…

Here are some money traps and how to avoid them