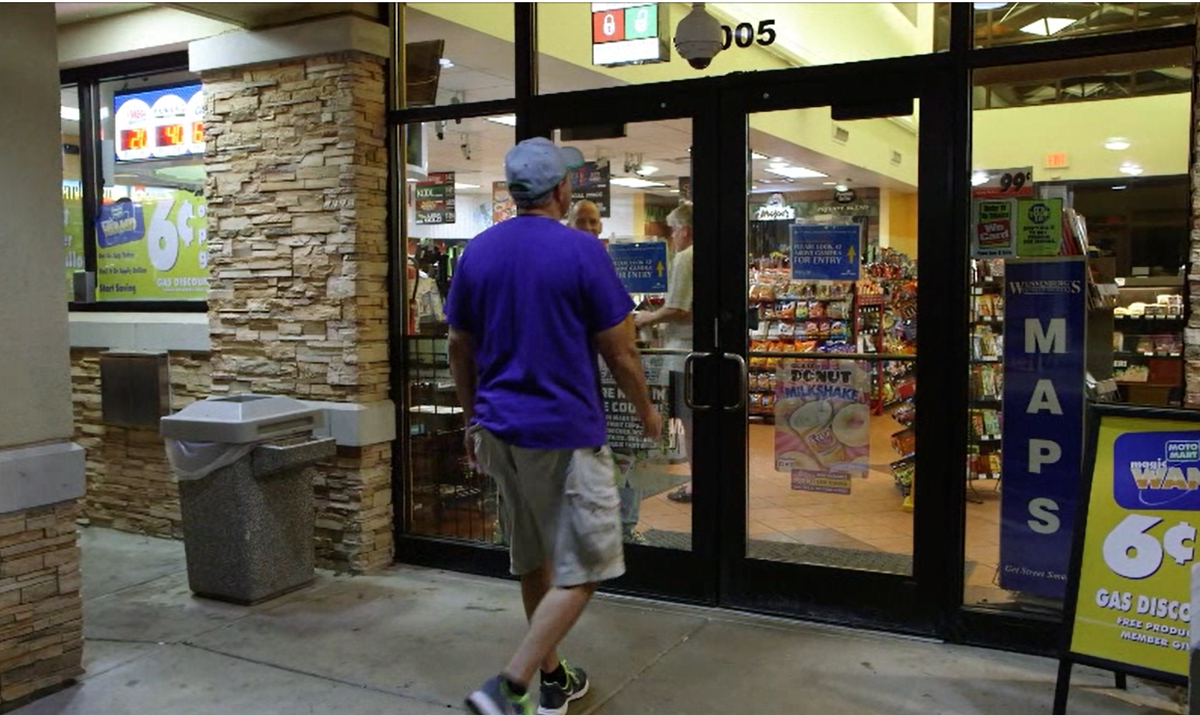 A customer walks up to the MotoMart at 11005 Riverview Drive but won't be allowed inside unless the camera, which uses Blue Line Technology's facial-recognition software, can scan his face. 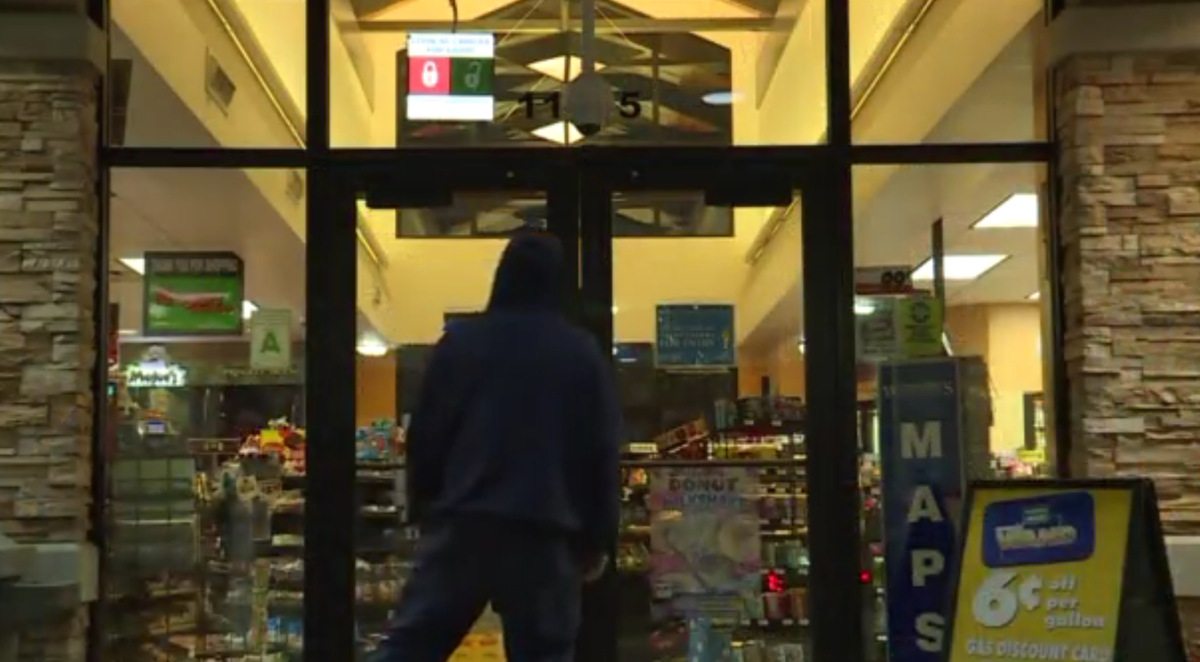 The MotoMart at 11005 Riverview Drive locks its doors at night and only unlocks them when a customer looks directly into a camera using Blue Line Technology's facial-recognition software. The installation has reduced crime at the store. 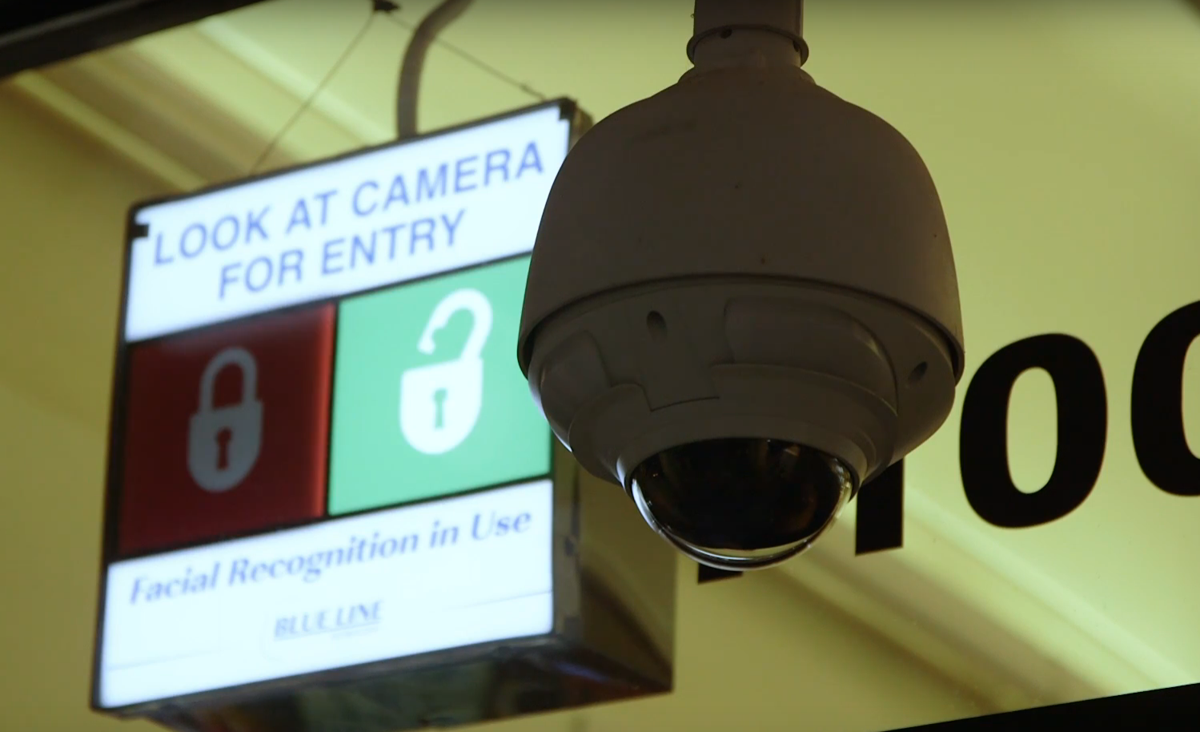 A camera at MotoMart, 11005 Riverview Drive, uses facial recognition software from Blue Line Technology, and can deny entry if it can't recognize a person's face.

At one MotoMart, you can’t enter at night unless you look into the camera.

If your face is obscured by a mask, face or hood, the door stays locked. If the camera gets a good look at you, it lets you in.

The MotoMart, on Riverview Drive just north of Interstate 270, is piloting a facial recognition system designed by a trio of current and former police officers who decided they’d rather prevent crimes than investigate them.

Their company, Blue Line Technology, has installed cameras with its software at several places around town, including Spire’s corporate headquarters, St. Mary’s High School and another convenience store on Hampton Avenue.

They’ve also reached a distribution agreement with electronics wholesaler Anixter International and are getting attention from a few national and regional retailers. Blue Line has hopes of selling between 300 and 400 systems this year, which the company says would be enough to turn a profit.

From there, the sky’s the limit. Tech giants including Apple, Facebook and Google are in the facial-recognition business, but the founders of Blue Line say their security focus and their patent-pending software, which can process an image and match it to a database in a split- second, should provide a lucrative niche.

Blue Line has come a long way from the primitive system that one of the founders, St. Louis Police Sgt. Marcos Silva, built in his house.

The company, founded in 2013, won a $50,000 Arch Grant in 2014. With the grant came access to various mentors and advisers, who helped the founders understand their shortcomings.

“I didn’t know what an IP [internet protocol] address was when we started this,” says co-founder Tom Sawyer, a veteran of the city police and federal Drug Enforcement Agency. “Now I can at least hold a conversation about technology and not sound like a 21-year policeman.”

“We knew how to tell people to stay safe using this technology, but we knew we needed help on the business end of running a startup,” adds his partner Joseph Spiess, a former St. Louis police detective.

Ben Burke, interim executive director of Arch Grants, has been impressed by how far a group of entrepreneurs without typical business or technology backgrounds have taken their product. “They weren’t experienced, but they were very deliberate with every step they took,” he said. “I’ve found the Blue Line Technology team to be as laser-focused as any of the entrepreneurs in our portfolio.”

Blue Line’s eight-person team operates from an office in Fenton. While pitching retailers on a system like the one at MotoMart, they’re developing other applications.

A corporate data center, for example, could bolster security by adding facial recognition. The cameras would prevent someone with a stolen, forged or borrowed ID card from gaining access. A day care center or hospital nursery could allow parents and staff in while keeping unauthorized strangers out.

Blue Line also thinks it could win government contracts someday — it installed a system at the Carnahan courthouse downtown in 2014 — but it’s concentrating on the commercial market for now.

How big is that market? The nation’s 155,000 convenience stores, Brauss estimates, get robbed 30,000 times a year. If smart cameras can put a dent in that number, no retailer should be without one.

Job market is recovering from COVID-19 shock, but a rise in infections could reverse that

Where's the price of beef? Sky-high at the supermarket, but too low at the farm

COVID-19, which shut packing plants as consumers were filling up their freezers, gets most of the blame.

Gold is gleaming again, but its record as an investment is mixed

Firm was criticized this spring for lack of gender diversity

A customer walks up to the MotoMart at 11005 Riverview Drive but won't be allowed inside unless the camera, which uses Blue Line Technology's facial-recognition software, can scan his face.

The MotoMart at 11005 Riverview Drive locks its doors at night and only unlocks them when a customer looks directly into a camera using Blue Line Technology's facial-recognition software. The installation has reduced crime at the store.

A camera at MotoMart, 11005 Riverview Drive, uses facial recognition software from Blue Line Technology, and can deny entry if it can't recognize a person's face.