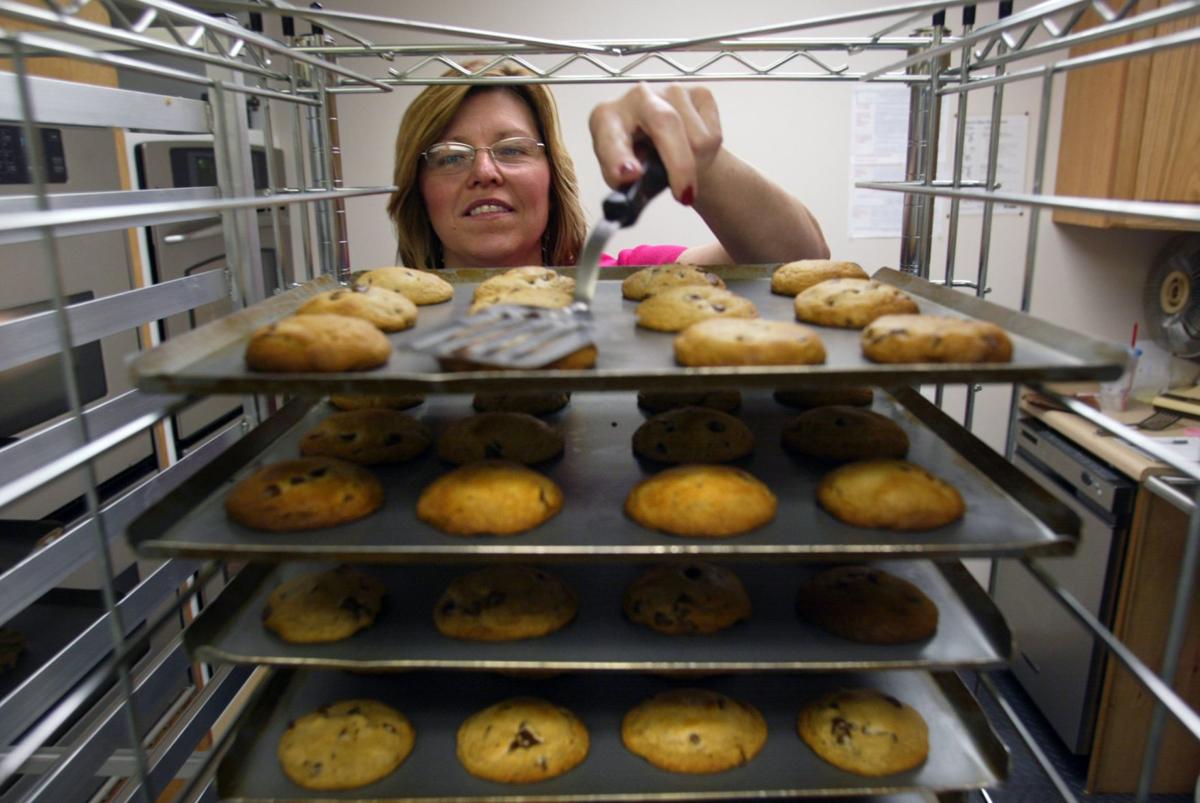 FILE PHOTO: Susie Wilson, then known as Susie Hirsch, prepares chocolate chip cookies in an Oct. 4, 2005, file photo. She used a good recipe, hard work and persistence to get her Soozie's Doozies cookies into Dierbergs stores. Her cookies were  mixed using small household-type mixers and, she said, "Each cookie we bake gets a love pat, no exceptions." Post-Dispatch file photo.

To look at the website for Soozie’s Doozies, a cookie-dough company in Union, you’d never know there was a real person behind the name.

Susie Wilson wants people to know her story. She coined the Soozie’s Doozies name in 2003 and built a successful business selling cookies online and in Dierbergs and Straubs stores, and she gets angry when she thinks about how she’s been written out of its history.

The website says Soozie’s Doozies was founded in 2015, and the brand’s Facebook page explains the “cool name” by saying that “their cookies are doozies! And what rhymes with Doozies?”

That’s all true — 2015 was when the company switched to its current model of selling refrigerated dough — but Wilson knows there’s more to the story.

Her story is about how life sometimes gets in the way of entrepreneurial dreams. It’s also a cautionary tale: Wilson now knows she shouldn’t have signed a document she didn’t fully understand, and should have gotten legal advice when selling her company.

When the Post-Dispatch profiled her business in 2005, Wilson was baking 5,000 to 6,000 cookies a day at a commercial kitchen in Ellisville.

In 2007, she went through a series of personal crises: a divorce, arm surgery and a move to Mountain Home, Ark., to care for an ailing family member. A doctor said her arm problems were caused by the repetitive stress of mixing cookie dough.

She sold the business to Robert Stanton, who is chief operating officer of Soozie’s Doozies’ parent SKU Foods. Wilson says she always believed she kept a 10 percent interest, but she didn’t read the contract. When shown a copy of the agreement a few weeks ago, she learned that she has no ownership.

As of early March, she also has no role. As an independent broker, she had been paid for getting the cookie dough into Harps supermarkets in Arkansas and had arranged meetings with Walmart. Olivia Kelvin, SKU Foods’ chief executive, said in an email that Wilson’s brokerage agreement was terminated “due to lack of performance on her part.”

As far as SKU Foods is concerned, Wilson was part of a predecessor company that has nothing to do with the current incarnation of Soozie’s Doozies.

Soozie’s Doozies has raised money from the Prosper and Capital Innovators accelerator funds and members of the St. Louis Arch Angels. The company recently introduced a ready-to-eat cookie dough bar, and its products are sold in supermarkets in 38 states.

Wilson, meanwhile, remains emotionally attached to the brand she created. “The reason I stayed on as long as I did was because of the love and the passion,” she said. “It’s still very much a part of who I am and it will always be that.”

She’s also still baking. Every Sunday, she treats members of her Mountain Home church to cookies made from the original Soozie’s Doozies recipe.

Shares jumped 40% one day, fell 70% the next as the company priced a large stock offering. Regulators, are you paying attention?

Nicklaus: MAGA funds fill an emotional need, not an investment one

Funds are being marketed to conservative, 'anti-woke' investors

Nicklaus: Arch Grants makes second bets on some of its most promising firms

GiftAMeal and Provider Pool get $100,000 each to pursue expansion

FILE PHOTO: Susie Wilson, then known as Susie Hirsch, prepares chocolate chip cookies in an Oct. 4, 2005, file photo. She used a good recipe, hard work and persistence to get her Soozie's Doozies cookies into Dierbergs stores. Her cookies were  mixed using small household-type mixers and, she said, "Each cookie we bake gets a love pat, no exceptions." Post-Dispatch file photo.