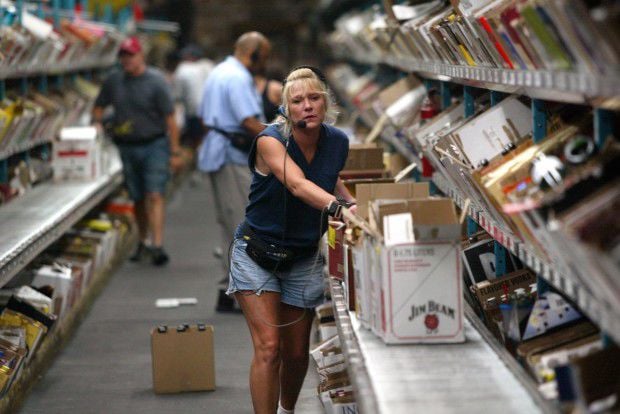 In this Post-Dispatch file photo, Dawn Dodson pushes boxes along the mixed-case line at Major Brands Premium Beverage Distributors as she talks via a headset with a dispatcher that directs her on which bottle of alcohol to include in the customers order. In the course of the evening over 21,000 bottles of alcohol moved on this line. Photo by Kevin Manning. 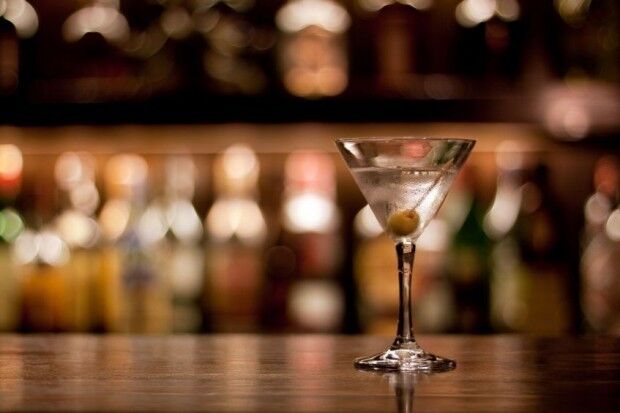 When business groups hire dozens of lobbyists to push an issue in the state Capitol, you can ignore the lofty rhetoric and focus on the money and power.

So it is with the fight over Missouri’s liquor laws.

Much of the nation’s wine and liquor industry, led by the Distilled Spirits Council of the United States, will tell you the fight is about free enterprise, the right of a company to choose its business partners.

On the other side is Major Brands, a St. Louis distributor with 700 employees, which says it’s out to protect Missouri businesses from unfair competition. It’s also fighting for states’ rights, as enshrined in the 21st Amendment.

If you consume these businesses’ products, you’re familiar with that one. It is the

amendment that repealed Prohibition, and it gave states the right to regulate the sale of alcohol.

Missouri is one of 13 states that protected distributors, such as Major Brands, under a franchise law. That means a liquor producer can’t easily muscle its distributor aside. Last year, though, a federal appeals court threw out part of Missouri’s franchise law, creating a scramble of lawsuits and contract cancellations.

Several distributors are affected, but Major Brands looks like the biggest potential loser. It has received termination notices from four suppliers, including Diageo, which accounts for 42 percent of its spirits business.

After the federal court ruling went against them, Major Brands and its allies turned to the Missouri Legislature. On Tuesday, the House voted 112-47 to restore the distributors’ franchise protection.

The Distilled Spirits Council quickly denounced the bill as “anticompetitive, anti-consumer legislation that violates the spirit of free enterprise.” And it has a point: Wholesalers in most industries, like food or apparel, don’t have this kind of protection. If a manufacturer finds a partner that’s better or cheaper, it can switch.

Donn Lux, chairman of St. Louis liquor producer Luxco, would like to have that kind of freedom. His business operates less efficiently in franchise-law states, he said.

“The cost of doing business is more,” he said. “Because we’ve grown through acquisitions, we might have three brands with one distributor, five with another, six with another. We have to call on all three, we have to deliver product to all three.”

Sue McCollum, chief executive of Major Brands, says there were ways to switch distributors under the franchise law, but it had to happen through negotiation, not unilateral decision.

“This legislation is necessary because we need to restore certainty and stability to the business environment after a court decision created instability and chaos,” she said.

Certainty and stability may be a tall order for Major Brands, given that it’s being sued by some of its biggest suppliers. Even if the franchise legislation passes, the litigation is likely to continue.

The bill’s fate is now up to the state Senate, which is due to adjourn Friday.

If there is a vote, it will get attention well beyond Jefferson City. “Everybody is watching it; this issue is bigger than Missouri,” says Emily Pennington, editor of trade publication Wine & Spirits Daily.

With the spirits industry pushing hard to consolidate its distribution chain, one gets the feeling that this fight won’t really be settled this week, regardless of how the Senate votes. There’s simply too much money at stake.

The bill was aimed at regulating the link between alcohol suppliers and distributors.

A jury will determine whether to award damages to Major Brands.

Deal will lend stability to smaller player in liquor distributing

In this Post-Dispatch file photo, Dawn Dodson pushes boxes along the mixed-case line at Major Brands Premium Beverage Distributors as she talks via a headset with a dispatcher that directs her on which bottle of alcohol to include in the customers order. In the course of the evening over 21,000 bottles of alcohol moved on this line. Photo by Kevin Manning.