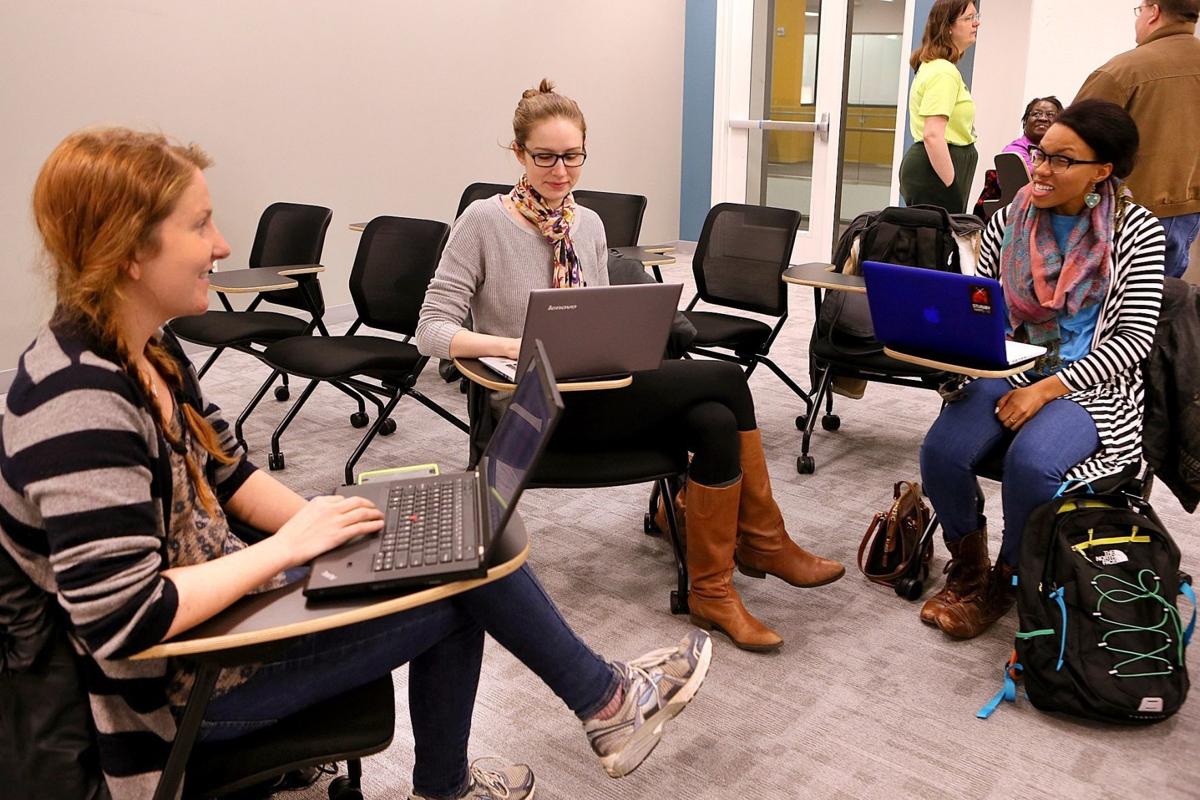 From left to right: Rosie Shanley, Rachel Noccioli and Crystal Martin gather at CoderGirl, a Wednesday evening meetup sponsored in 2014 by LaunchCode for women who are interested in programming. Photo by Cristina Fletes. 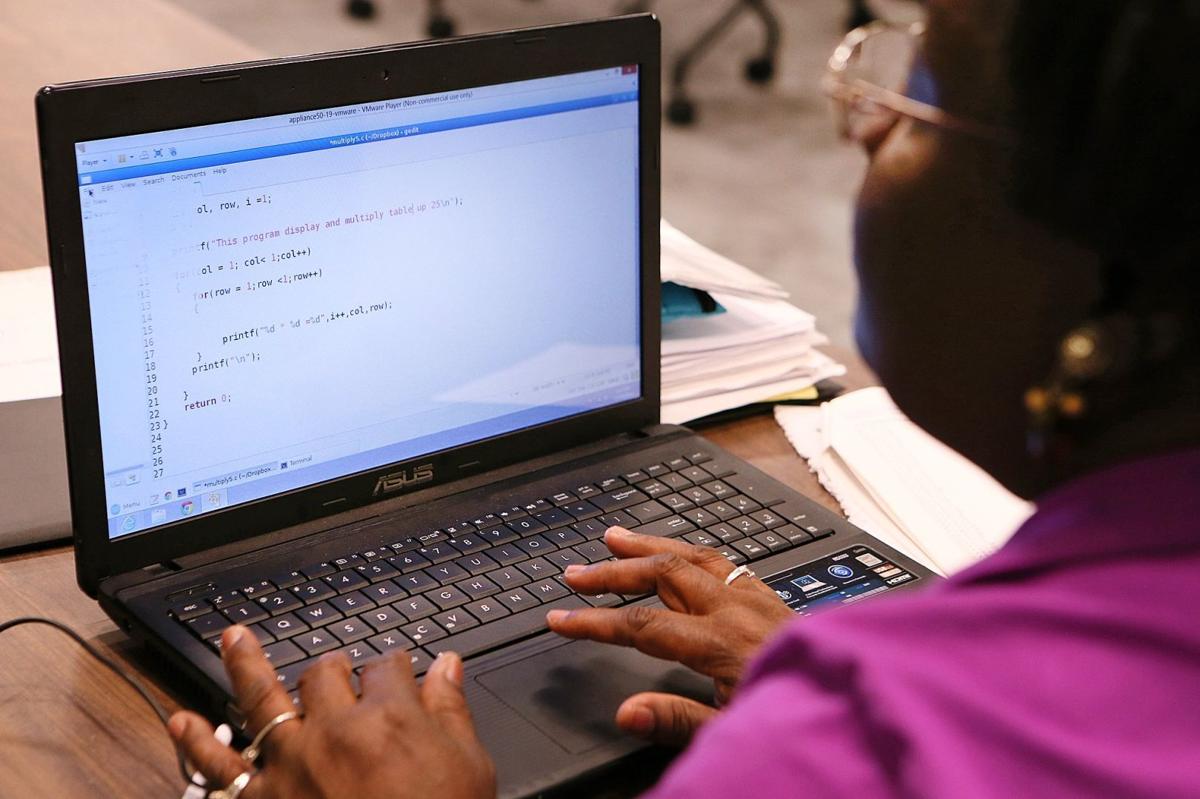 Esther Houston works on coding in 2014 during CoderGirl, a meeting sponsored by LaunchCode for women interested in programming.

Je’Nell McCrary loved being an on-air radio personality but could see that the industry’s financial future wasn’t bright.

The technology industry, with higher pay and an ever-growing need for workers, beckoned, but the first programming course McCrary took was too technical for her.

Then a friend told her about CoderGirl, a class offered by the nonprofit LaunchCode that aims to make women comfortable in the technology field. She took the class, which led to an apprenticeship and, in August, a full-time job at Centene as a “scrum master,” coordinating a team that develops applications for the health care company.

McCrary is one of at least 2,300 success stories for LaunchCode, which was started in 2013 by Square co-founder Jim McKelvey.

The idea was to expand St. Louis’ pool of tech workers by training people who had an aptitude for coding but lacked traditional credentials, such as a computer science degree.

After initial success here, LaunchCode suffered growing pains when it expanded to other markets such as Seattle and Miami. Executive Director Jeff Mazur said LaunchCode now concentrates its training in St. Louis, Kansas City and northwest Arkansas, plus some small classes it does around the country for specific employers.

Seattle proved to be an especially poor fit. “You learn a lot of things when you try new stuff,” Mazur said. “In a city that has net in-migration of people, many with existing skills, it isn’t a great environment for an organization like ours.”

The good news for LaunchCode is there are more places like St. Louis, with an acute shortage of tech talent, than like Seattle.

Large companies like Centene and Mastercard are the biggest employers of LaunchCode alumni, but smaller firms also depend on the program to fill jobs.

The eight LaunchCode grads at artificial intelligence software company Balto are nearly a sixth of the firm’s 52-person staff. “It’s been 100% success,” Chief Executive Marc Bernstein said. “We’ve never had a LaunchCode apprentice who has not worked out.”

“LaunchCode means Balto can always look to St. Louis as our first and primary source of talent,” Bernstein said. “We are not having to go to the coasts as our first look.”

As important as the training is to employers, it’s even more crucial for individuals looking to change careers.

Michael Sisay, a native of Ethiopia, was a Starbucks barista when he enrolled in LaunchCode in January. Now he’s an apprentice developer at World Wide Technology.

Sisay had taught himself how to program, but that by itself wasn’t enough to jump-start his career. “I knew how to code but I didn’t know how to take that knowledge and actually apply for a job,” he said. “LaunchCode also taught me to work as part of a team, and that has helped me a lot.”

LaunchCode enrolls about 1,000 people a year in its free classes. Only 600 or so graduate with marketable job skills, but Mazur said that completion rate is comparable to university and community college programs. About 300 grads each year are placed directly in apprenticeships.

The organization is expanding its headquarters on Delmar Boulevard to accommodate about 200 more students a year.

The group says it turned away 3,700 applicants last year, partly because it’s picky about qualifications but partly due to a lack of space.

McCrary, for one, is glad LaunchCode opened a door for her just as another one was closing; she was laid off from her radio job in April.

“I’m growing in a new career, and I can see myself continuing in technology,” she said. “I am comfortable.”

From left to right: Rosie Shanley, Rachel Noccioli and Crystal Martin gather at CoderGirl, a Wednesday evening meetup sponsored in 2014 by LaunchCode for women who are interested in programming. Photo by Cristina Fletes.

Esther Houston works on coding in 2014 during CoderGirl, a meeting sponsored by LaunchCode for women interested in programming. 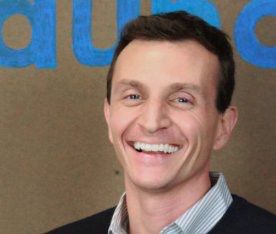 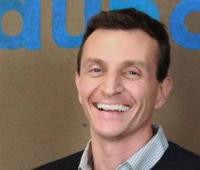