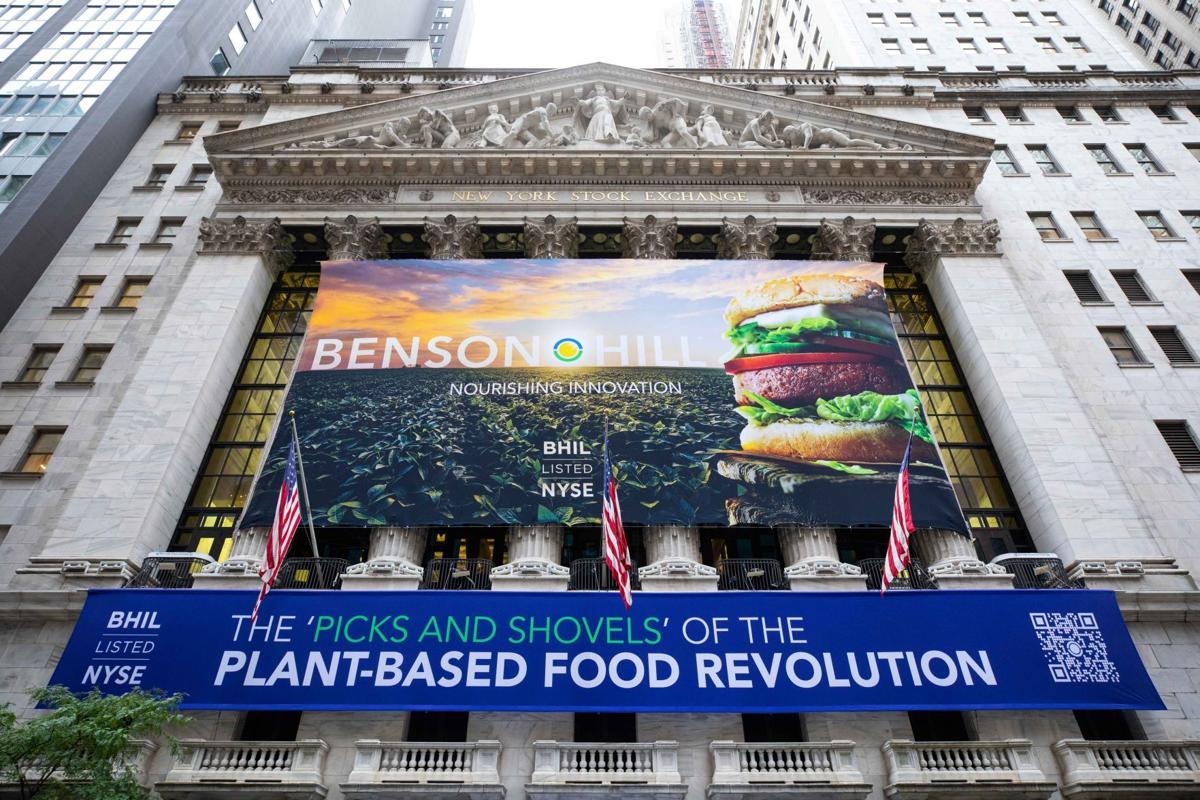 A Benson Hill banner on the front of the New York Stock Exchange on Oct. 5, 2021, celebrates the agricultural technology company's stock-market debut, which occurred a few days before. (NYSE photo via AP) 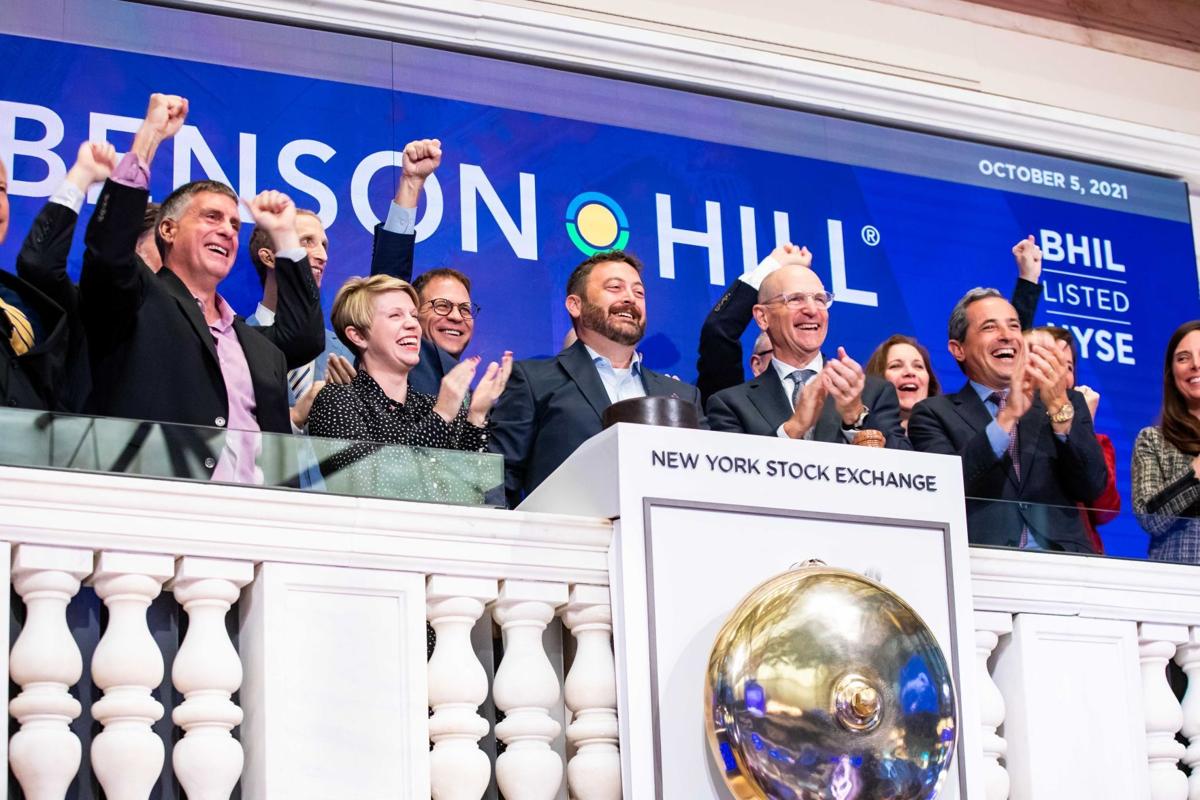 Benson Hill executives were in a celebratory mood when they rang the New York Stock Exchange opening bell, but the stock ticker wasn’t.

By the time Chief Executive Matt Hill and his colleagues gathered for the Oct. 5 bell ceremony, their company’s shares had fallen 35% since making their debut a week earlier. The icy reception may reflect some lack of understanding about how the Creve Coeur company expects to make money, but it seems to be mostly about the method Benson Hill used to go public.

Benson Hill gained its listing by merging with a special purpose acquisition company, or SPAC, which is essentially a shell company set up to buy other firms.

SPACs have become extremely popular, and their popularity has attracted arbitrageurs who see a low-risk trading opportunity. When their shell merges with an operating company, shareholders have the right to cash out their shares at the original offering price, usually $10, plus a little interest.

If a hedge fund buys when the SPAC is trading at a discount, as most do, the $10 looks like a guaranteed profit. Until recently, relatively few shareholders took advantage of the guarantee, but, according to financial services company Cowen & Co., redemptions since Labor Day have averaged 63%.

Redemptions were even higher — 76.5% — at Benson Hill’s merger partner, Star Peak Corp. II. They drained $308 million of cash that would otherwise have gone to Benson Hill.

Brian Matthews, general partner at local venture capital firm Cultivation Capital, said the cash outflow came as a “sucker punch” during the “crazy process” of merging with a SPAC.

The agricultural technology company still raised more than $300 million by going public, including $95 million from Star Peak and $225 million from a private placement, and Crisp has said it’s enough to meet the company’s capital needs.

Benson Hill says it wasn’t surprised to see the shares fall. “There have been multiple reports highlighting significant trading volatility for the vast majority of companies completing SPAC transactions regardless of industry, and Benson Hill was not immune to this broader market issue,” a spokesperson said.

The spokesperson added that “there hasn’t been any fundamental change to our business or the overall opportunity we are targeting” and that “Benson Hill is well funded with the capital to continue executing our strategic objectives.”

Benson Hill shares rose 6% last week, and Carter Williams sees signs that the initial volatility may be ending. Williams is chief executive of St. Louis-based iSelect Fund, which like Cultivation is a Benson Hill shareholder.

“Right now, we have a lot of long investors and there are not a lot of people selling,” he said. “The volume has settled down, and that means the technical traders have gotten out.”

Williams expects the shares to find more support after the company reports third-quarter earnings next month and especially after its fourth-quarter report, which includes the critical soybean harvest season.

“If earnings are close to the forecast, I think people will say, ‘OK, this team has its act together,’” he said.

Coverage from Wall Street analysts should help. Firms that advised on the merger, including Barclays Capital, Goldman Sachs and Credit Suisse, can’t publish research for a month afterward.

In hindsight, Matthews said, Benson Hill might have been better off doing a conventional initial public offering. But what’s done is done, and Benson Hill is now a public company worth $1.2 billion. If it can deliver strong results, the rocky market debut will soon be forgotten.

Geospatial World, a media and consulting firm based in India, is opening its U.S. headquarters in St. Louis.

Nicklaus: If Fed weighs risks properly, it should raise rates sooner rather than later

Central bank, and the economy, have much to lose if inflation stays red-hot

OptiFunder says it has grown 400% this year

Nicklaus: So far, Trump's media company is all hype and no substance

Shares have soared, but company has disclosed no financial details and said little about its business plan.

Metro area has gained 21,000 jobs in past year but recovery has been stop-and-start

Investors favor simple, pure-play companies, so the 'gold standard' of diversified manufacturing is being broken into three parts

Technology shows promise in improving outcomes in places where it's difficult to access care.

Nicklaus: Meta may be the future, but Facebook can't run from its past

Nicklaus: From cars to candy, the world's supply chains are snarled

Washington U. expert sees relief by next summer, but one freight forwarder is less optimistic

A Benson Hill banner on the front of the New York Stock Exchange on Oct. 5, 2021, celebrates the agricultural technology company's stock-market debut, which occurred a few days before. (NYSE photo via AP)