After an extensive review of its operations and structure, Emerson has decided to remain whole.

“There’s no breakup at this point in time,” Chief Executive David Farr told analysts Thursday in New York. “We are looking at huge opportunities within our businesses.”

That’s news because an activist hedge fund, D.E. Shaw, had urged Emerson to split itself in two, with one company focusing on factory automation and another making a variety of products including tools and air-conditioning compressors.

Farr’s no-breakup comment was the closest he came to acknowledging D.E. Shaw’s criticism as he unveiled the results of a far-reaching corporate review. Emerson will eliminate 2,900 salaried jobs, close as many as 145 plants and offices and perhaps sell some small business units.

Farr said Emerson began looking at cost-saving measures last spring, when it saw signs of a slowdown in orders. The steps announced Thursday are similar to moves Emerson made in the recession years of 2001 and 2008 and in response to an oil-industry slump in 2014.

“It’s the standard Emerson approach,” said Jeff Windau, an analyst at Edward Jones. “They’re very rigorous about how they run the business on the cost side and the planning side.”

Windau said the hedge fund didn’t force Emerson’s hand, but perhaps did prompt the company to disclose more details about its restructuring. “It’s probably actions they would have taken, but they were more vocal about the actions,” he explained. “They spoke a lot about targets for divestitures and head count, a lot of which might have been behind closed doors in the past.”

In an earlier conference call on Feb. 4, Emerson even discussed the size of its aircraft fleet, a number that rarely came up in public until D.E. Shaw singled it out for criticism. Emerson said it now owns five corporate jets, down from eight planes and one helicopter last October.

The cost-cutting moves are aimed at saving $450 million a year. Farr said the company was planning on “very little economic recovery” in its core businesses this year.

Much of Emerson’s factory automation revenue comes from the oil and gas industry, which has been hurt by low energy prices. Sales in the refrigeration and tools segment also have been soft.

Farr said Emerson was not cutting research spending and would invest in new facilities in “best-cost” locations such as Mexico, India and Eastern Europe.

He also said the company would spend between $400 million and $500 million on acquisitions this year, most of them small “bolt-ons” that complement existing businesses.

Continuing to invest, Farr said, will make Emerson stronger when growth eventually picks up. “We do not want to jeopardize the franchises that we have built over many years,” he said.

An Emerson spokesman said job cuts should be minimal at the company’s 1,400-person headquarters in Ferguson.

Meanwhile, the decision to keep the company in one piece looks like a win for the St. Louis area, where Emerson donates tens of millions of dollars a year to cultural and charitable groups. A breakup would have left two smaller companies to compete in cyclical industries, without a strong balance sheet to see them through tough times.

Shareholders and employees should take heart from the fact that Farr has led Emerson through several restructurings before, and it has always emerged stronger for the experience.

Biggest shopping mall owner in St. Louis says it may be unable to stay in business

Nicklaus: Terrible job market will have long-term consequences for teens

'Kids got crushed' by the pandemic, one labor market expert says 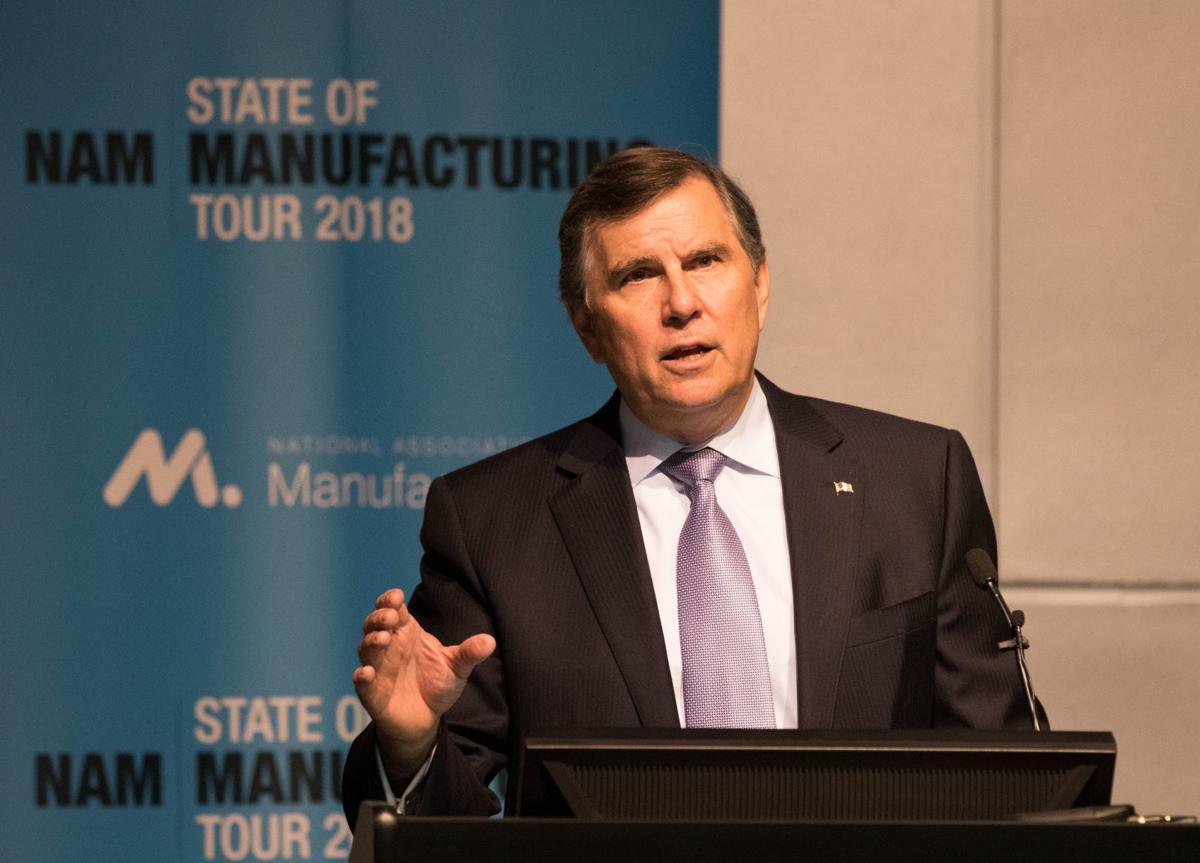 David Farr, CEO of Emerson Electric Company, speaks in front of an audience at Ranken Technical College in St. Louis on Thursday, Feb. 22, 2018. Ranken recently opened a new manufacturing incubator funded by a $2.5 million federal grant. Farr is speaking at the college as a part of the State of National Association of Manufacturers Tour. Photo by Austin Steele, asteele@post-dispatch.com