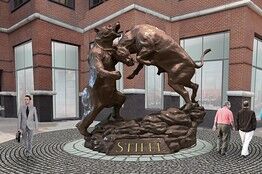 A rendering of the bull and bear statue Stifel Financial is adding at the corner of Broadway and Washington Avenue in downtown St. Louis. The artist is Harry Weber of Wright City, Mo.-based Bronze Fox Studio. Weber's sculptures include a statue of explorers Lewis and Clark on St. Louis' riverfront and multiple statues of Cardinals players outside Busch Stadium.

We can’t say this often here in flyover country, but St. Louis has something important that’s lacking in financial hubs such as New York, Boston, Philadelphia, Charlotte, N.C., and San Francisco.

We have a growing financial services industry. Nationwide, financial sector employment has fallen 4 percent since the recession began in December 2007, and most big money centers have felt the job loss.

The St. Louis area has added 10,200 financial jobs, for growth of 13 percent. It’s a rare bright spot for a region where overall job growth remains sluggish.

The industry’s strength has helped St. Louisans who lost jobs in other industries, and it’s been a beacon to people such as Anne Larson, who moved here to become director of client acquisition for Wells Fargo Advisors.

Larson didn’t know much about St. Louis when she accepted a transfer from Wells Fargo’s banking division in San Francisco. A year later, she’s convinced it was a good move personally and professionally.

“There are all of the amenities of a big city in a smaller setting,” says Larson, who lives in Town and Country. “And I was surprised to learn how much headquarters presence there is here for other financial services companies.”

That’s music to the ears of Steve Johnson, executive vice president at the St. Louis Regional Chamber. In a strategic planning exercise four years ago, the chamber identified financial services as a strength the region should build on.

Surprisingly, it’s done so without adding any major new employers. The chamber has had a couple of near-misses in attempts to woo back-office operations of major Wall Street firms, Johnson said.

Civic leaders didn’t place all their bets on big companies. The region also has a grow-our-own strategy that includes SixThirty, an accelerator fund for financial technology companies. It has backed 12 early-stage companies in the past two years, including at least two out-of-town firms that have established permanent offices here.

Those 12 firms employ 55 people, a tiny fraction of the region’s 90,000-person financial workforce. The hope is that some of them eventually will grow much larger.

Karl Kuykendall, a regional economist with IHS Global Insight, says St. Louis’ financial sector was touched only lightly by the subprime crisis, which destroyed thousands of jobs in other major financial centers.

The brokerage firms in St. Louis are all dedicated to serving individual investors, not packaging exotic securities, and that’s been a good business. “The post-recession stock market recovery has had a major positive influence on the financial sector in St. Louis,” Kuykendall said.

St. Louis has neither of those advantages. All we have are several firms in the financial sector’s sweet spot, along with leaders who are trying to figure out where the industry is headed. For the moment, at least, that’s a winning combination.

Formerly fast-growing sector has shed 2,700 jobs in the past year.

Nicklaus: St. Clair County ranks last for job growth, but with an asterisk

End of Prairie State project skewed the numbers, leaving a 3.1 percent decline for 2013

One startup, Upside, plans to build an engineering team here.

A rendering of the bull and bear statue Stifel Financial is adding at the corner of Broadway and Washington Avenue in downtown St. Louis. The artist is Harry Weber of Wright City, Mo.-based Bronze Fox Studio. Weber's sculptures include a statue of explorers Lewis and Clark on St. Louis' riverfront and multiple statues of Cardinals players outside Busch Stadium.