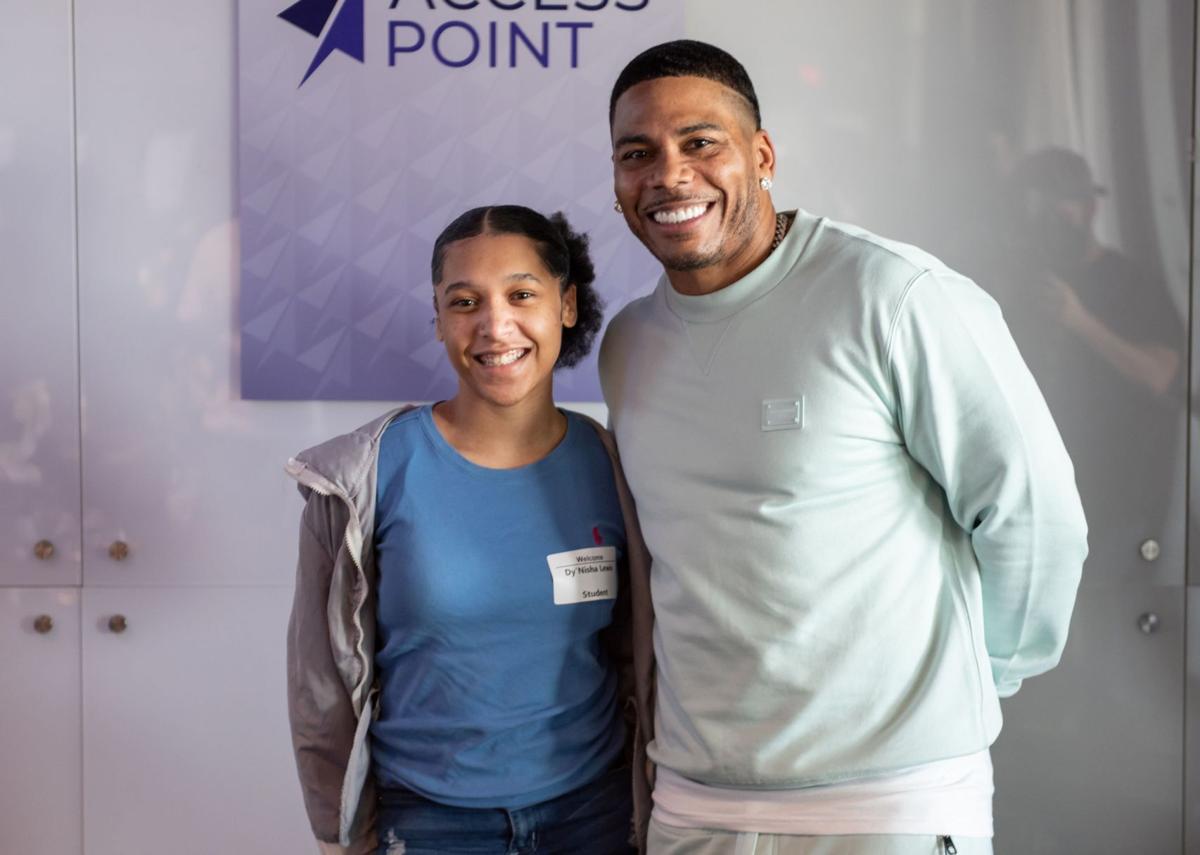 Access Point student Dy'Nisha Lewis poses for a photo with recording artist Nelly at the software training program's launch party, held May 15, 2021, at Topgolf in Chesterfield. 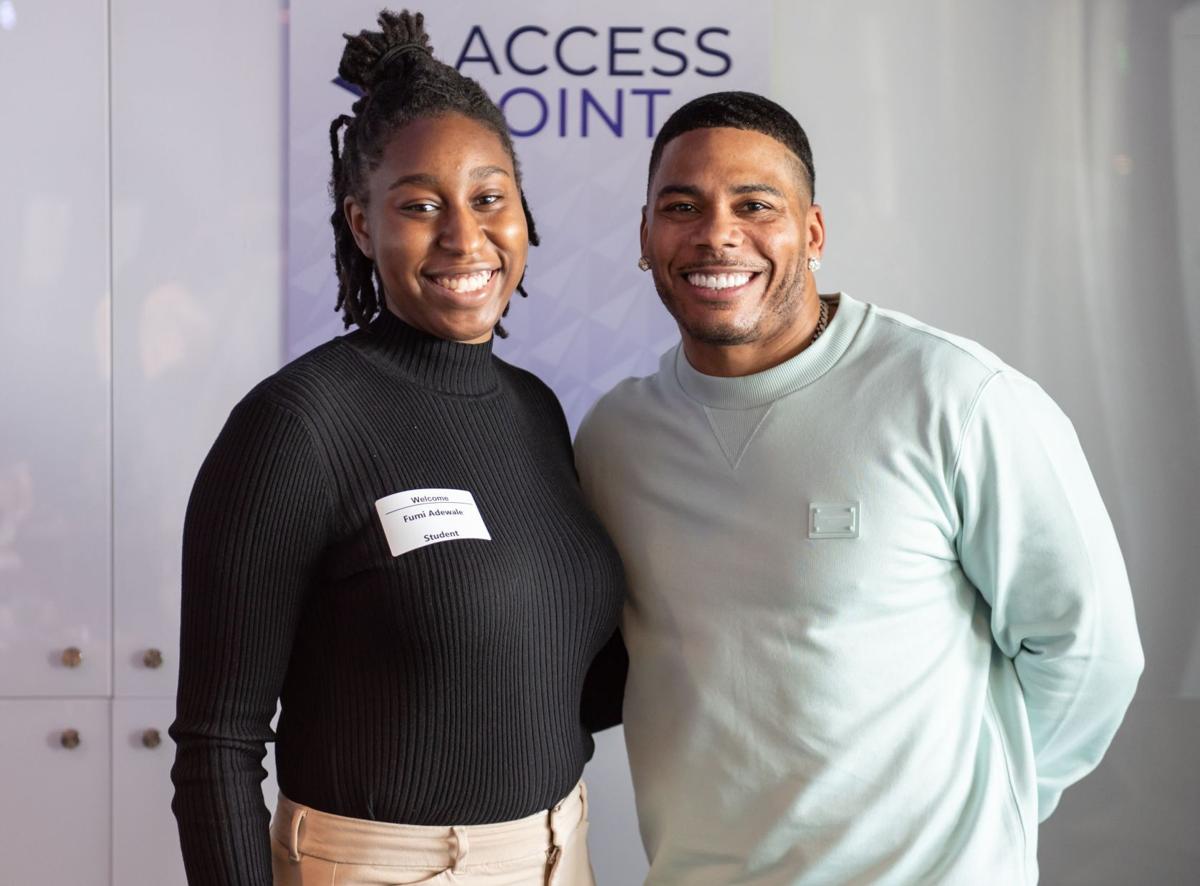 Access Point student Fumi Adewale poses for a photo with recording artist Nelly at the software training program's launch party, held May 15, 2021, at Topgolf in Chesterfield.

Dy’Nisha Lewis wanted a college education but wasn’t sure how she’d pay for it. She found her answer when a teacher mentioned a new program that would let her earn money as a software programmer while also accumulating college credits.

Lewis, 18, a recent graduate of Jennings High School, is one of the initial participants in Access Point, a program designed to help young women and people of color start careers in technology.

Besides creating opportunities for young people like Lewis, organizers are trying to solve two problems for employers: easing a severe worker shortage and diversifying a tech workforce that’s overwhelmingly white and male.

Access Point is being spearheaded by Ron Daugherty, chief executive of Daugherty Business Solutions in Creve Coeur. He and a few other area technology executives calculated that they’d need 4,500 more programmers within three years.

Existing programs — including LaunchCode, regional universities and boot camps such as Claim Academy and Npower — would turn out only a fraction of that number.

“We have to do some things differently. We have to shake up the system that is in place,” Daugherty argued.

That meant looking at nontraditional sources of talent, especially young women and people of color. They haven’t typically pursued computer science degrees, and many face obstacles to following a traditional academic path.

“Many of the individuals who will benefit from Access Point would never achieve a four-year college education,” Daugherty said. “They are smart enough and capable enough, but their economic circumstances would not let it happen.”

After four to eight months, Evernorth expects the apprentices to qualify for permanent software engineering jobs earning at least $40,000 a year. That won’t end the students’ involvement with Access Point, however: They’re expected to keep taking classes part-time toward a bachelor’s degree, and they’ll still have access to the program’s “hypercare” counselors, whose job is to deal with obstacles that get in the way of students’ career progress.

Two students, for example, have already needed help dealing with car breakdowns that made it difficult to get to class.

Fumi Adewale, a 2018 graduate of University City High School, likes the hands-on nature of the Access Point program. She’s close to completing an associate’s degree in cybersecurity, but jumped at the chance to start her career while removing uncertainty about how to pay for more education.

“In school they give you the textbook version,” said Adewale, 21. “Access Point shows you how it’s done in the real world.”

Access Point is working with several area districts, including St. Louis public schools, to recruit students. The plan is to enroll at least 100 high school seniors next January and have them start apprenticeships as soon as they graduate.

Daugherty is lining up more employers for next year, pitching Access Point as a way to help meet the goal of inclusive growth outlined in the region’s 2030 STL Jobs plan. He has personally invested $1 million to get the program started.

As he prepares for a full rollout in St. Louis, he’s talking to employers about expanding Access Point to other cities. If the technology industry is serious about inclusivity, Daugherty said, “This can be a game changer.”

Nicklaus: In a world first, St. Charles scientist's machine gets credit for an invention of its own

South African patent is first to list a non-human inventor

Quillt, formerly Gateway Blend, is focusing its sites on the 50-plus audience

Upward blip comes in a month when the area lost 1,700 jobs

Cable pioneer Jerry Kent is among the investors

Nicklaus: Clayton startup wants you to take control of your data, and earn a few dollars too

McKelvey founded Invisibly as a way to help publishers; now it's being pitched as a moneymaker for consumers

Access Point student Dy'Nisha Lewis poses for a photo with recording artist Nelly at the software training program's launch party, held May 15, 2021, at Topgolf in Chesterfield.

Access Point student Fumi Adewale poses for a photo with recording artist Nelly at the software training program's launch party, held May 15, 2021, at Topgolf in Chesterfield.