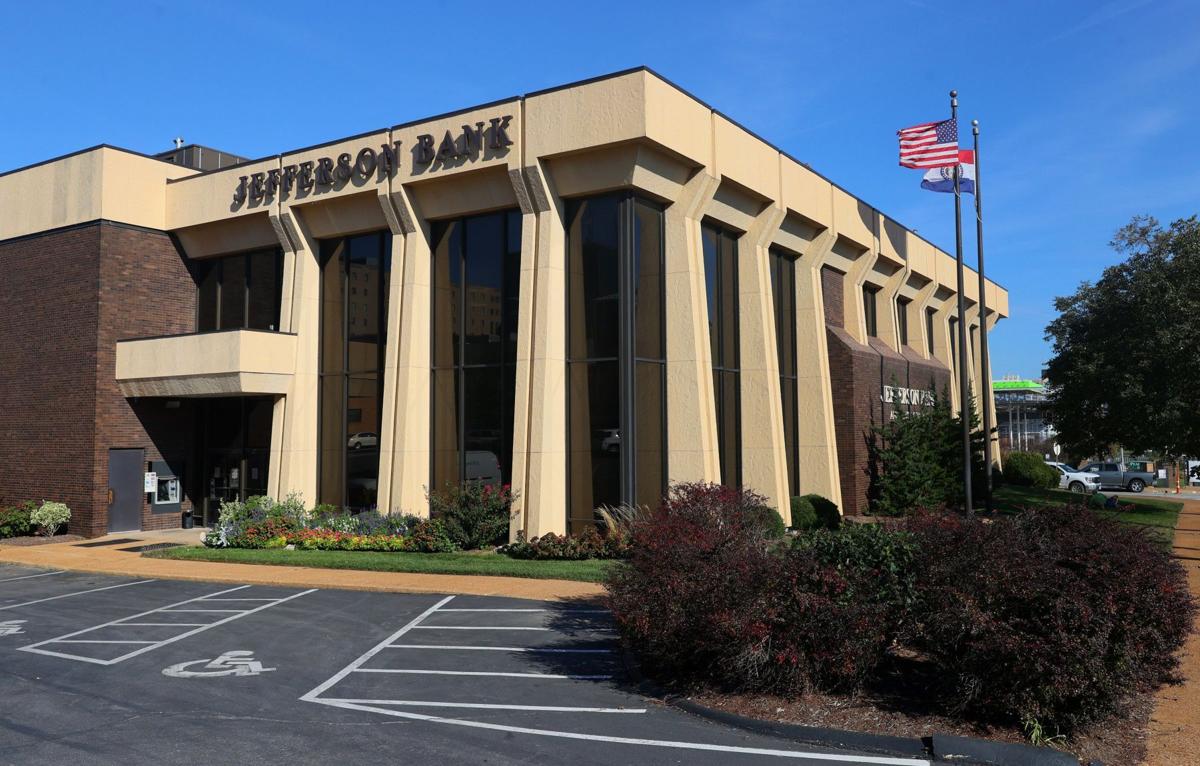 The Jefferson Bank & Trust headquarters building, located at 2301 Market Street in downtown St. Louis, is photographed on Wednesday, Oct. 20, 2021. Jefferson Bank is being acquired in a merger. Photo by Christian Gooden, cgooden@post-dispatch.com 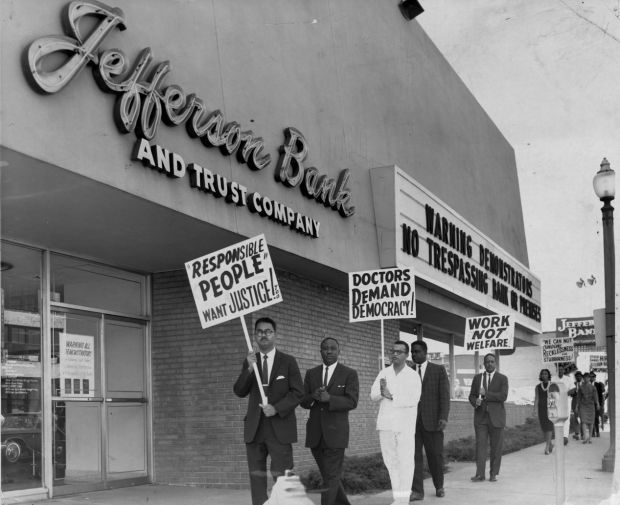 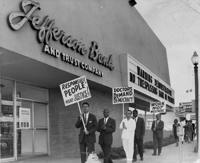 Protesters demonstrate against job discrimination at Jefferson Bank and Trust Co. at Jefferson Avenue and Washington Boulevard on Oct. 10, 1963. That day's demonstration by physicians and business professionals was peaceful and brief, lasting about 40 minutes. The protests at Jefferson Bank persuaded many companies to hire and promote more African-Americans.

Jefferson Bank, the target of a pivotal St. Louis civil rights protest, is again at the center of a fight involving the rights of minority groups.

The groups say Black borrowers got just 1.2% of mortgages made by First Mid in the St. Louis area, far below the 6.8% figure for peer banks. They cite similarly low numbers for First Mid in Champaign, Decatur and Peoria.

Horacio Mendez, president of the Woodstock Institute in Chicago, called the data “prima facie evidence” of “egregious redlining.” Woodstock, which does research on economic justice, joined the coalition seeking to block the merger.

Complicating the groups’ case is the fact that First Mid was rated “satisfactory” on its most recent Community Reinvestment Act evaluation. It got a “high satisfactory” mark for lending.

The exam was done by the Office of the Comptroller of the Currency, which regulates national banks. The Federal Reserve, which must approve the merger, may give credence to its fellow regulator’s opinion, but Mendez doesn’t think it should.

“This is a little bit of egg on the comptroller’s face,” he said. “The Fed has to take this seriously.”

The community groups met Oct. 1 with executives of both banks. “There was a lot of deflection,” Mendez said. “They didn’t have good answers about why the data is as bad as it is.”

Jackie Hutchinson, executive director of the Consumers Council of Missouri, said First Mid offered to commit $5 million to loans in minority neighborhoods in Missouri, but the groups rejected that as inadequate.

“They really didn’t come to discuss their history of lending in Illinois, or make a commitment to fixing the problems in the system,” she said. “The fact that they began to think about doing something is good, but we need a more comprehensive plan.”

Joe Dively, First Mid’s chief executive, issued a statement saying that the bank disagrees with the community groups’ comments. “We work closely with our regulators and community partners to make sure we are doing the right things for all our stakeholders,” he added.

While regulators rarely reject a merger based on fair-lending concerns, such protests have forced banks to make significant minority-lending commitments. Clayton-based Enterprise Bank cleared the way for a 2017 acquisition by promising to lend $90 million a year in underserved neighborhoods.

Elisabeth Risch, co-chair of the Equal Housing Alliance, said the groups are still willing to discuss such an agreement with First Mid. She added that outright rejection of the merger would also be “a positive outcome. This would send a pretty significant signal that banks need to take their community lending obligations seriously.”

The merger won’t change the balance of power in St. Louis banking. First Mid is the 18th-largest bank in the market and Jefferson ranks 36th.

The community groups, however, argue that Jefferson Bank’s history with the civil rights movement gives it importance beyond its size. “For a bank with redlining concerns to acquire this legacy adds insult to injury,” their letter says.

Nicklaus: Biden's moves aren't likely to do much about the price of gasoline

Reserve sales will have a limited effect, and pricing probe amounts to political hot air

Clever also is expanding into the mortgage business

Geospatial World, a media and consulting firm based in India, is opening its U.S. headquarters in St. Louis.

OptiFunder says it has grown 400% this year

Technology shows promise in improving outcomes in places where it's difficult to access care.

Nicklaus: If Fed weighs risks properly, it should raise rates sooner rather than later

Central bank, and the economy, have much to lose if inflation stays red-hot

Investors favor simple, pure-play companies, so the 'gold standard' of diversified manufacturing is being broken into three parts

The Jefferson Bank & Trust headquarters building, located at 2301 Market Street in downtown St. Louis, is photographed on Wednesday, Oct. 20, 2021. Jefferson Bank is being acquired in a merger. Photo by Christian Gooden, cgooden@post-dispatch.com

Protesters demonstrate against job discrimination at Jefferson Bank and Trust Co. at Jefferson Avenue and Washington Boulevard on Oct. 10, 1963. That day's demonstration by physicians and business professionals was peaceful and brief, lasting about 40 minutes. The protests at Jefferson Bank persuaded many companies to hire and promote more African-Americans.