Art Phetsadasack, left, and Brian Williams, right, carve a block of ice into an eagle with a chainsaw during the Fete de Glace, an annual ice carving festival and competition, on North Main Street in St. Charles Feb. 6. 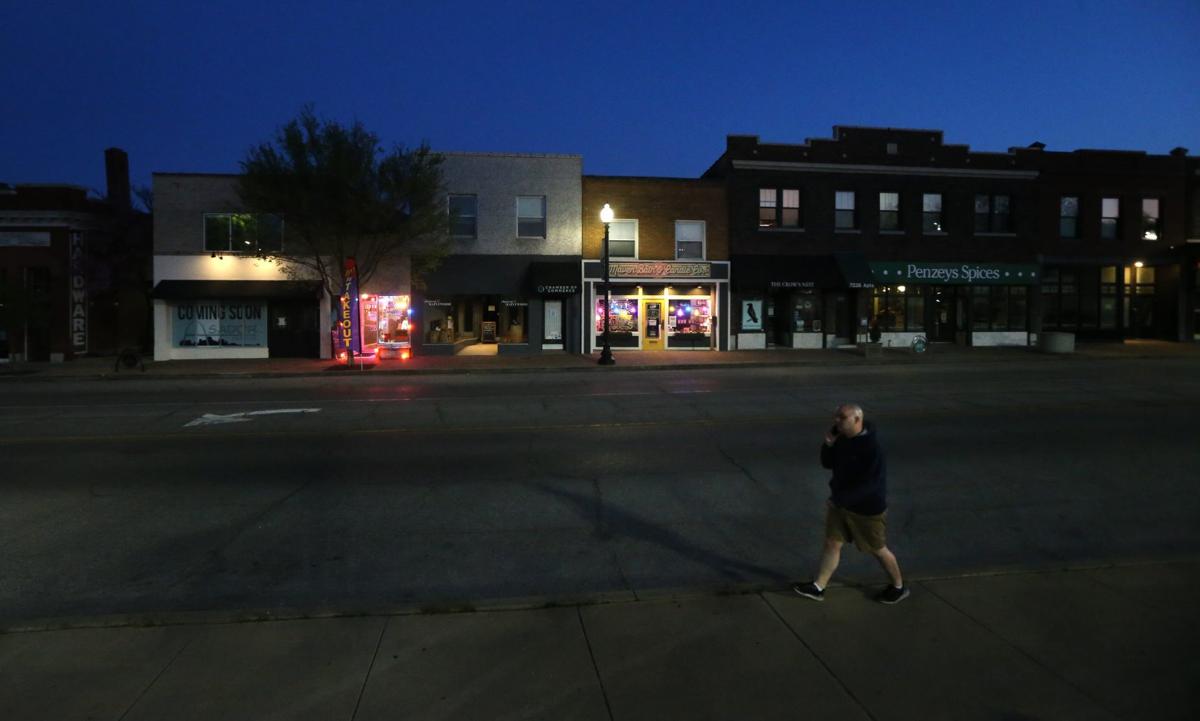 A lone pedestrian talks on the phone along Manchester Road in Maplewood on Monday, April, 20, 2020. With few restaurants and businesses open during the stay-at-home order, the popular business/restaurant district empties out after sunset during coronavirus pandemic. Photo by Laurie Skrivan, lskrivan@post-dispatch.com

Places like Main Street in St. Charles and Manchester Road in Maplewood aren’t the region’s biggest employment centers, but they loom large as neighborhood quality-of-life indicators.

The small businesses that line such commercial arteries have taken a disproportionate economic hit from the COVID-19 pandemic, so the civic group Greater St. Louis Inc. is giving them special attention in its STL 2030 Jobs Plan.

Through an initiative called Main Street STL, the group wants to make sure the region’s dozens of neighborhood business districts all recover after a year of diminished foot traffic.

“These are not just nodes of commerce, they are really centers of civic life,” said Bruce Katz, the consultant who wrote the jobs plan. “It’s almost like metro areas are networks of villages where residents see these main streets defining their community.”

Specifics of the Main Street initiative haven’t been announced, but the plan envisions a 36-month “strike force” that would offer grants, programming and training for neighborhood shops that want to expand or diversify into e-commerce. It would include an effort to recruit entrepreneurs to fill vacant storefronts.

Patrice Frey, president of the National Main Street Center, said she knows of a few citywide efforts, in places such as Boston and New Orleans, to shore up neighborhood businesses, but that St. Louis’ would be the first to cover an entire metropolitan area.

“It’s really exciting, and it could be a model for other metro areas,” Frey said.

Rachel Witt, executive director of the South Grand Community Improvement District, said neighborhood businesses have been surprisingly resilient during the pandemic. The district has lost only one business in the past year, and sales tax revenue has fallen far less than she expected. Two new restaurants are opening this spring.

Still, Witt welcomes a regional approach to helping businesses like those along South Grand. “They need support,” she said. “They’re still losing revenue, and they have rent and utilities to pay.”

Randy Schilling, owner of OPO Startups in St. Charles, is part of the Main Street STL organizing team. He sees the program as a chance to share advice about what works, such as St. Charles’ popular holiday promotions, and what doesn’t.

“St. Charles has done its own thing. Alton is trying to do their own thing. But nobody is collaborating,” Schilling said. “One thing Greater St. Louis Inc. can do is to network the Main Street business districts that already exist and create new ones.”

He also sees the initiative as an opportunity to help unite a politically fragmented region. “St. Louis could be the first metro area that puts regeneration of Main Street as a core priority in the aftermath of the pandemic,” Katz said. “The potential to knit the region together around this is really quite substantial.”

On Arsenal Street just west of Grand, MoKaBe’s Coffeehouse is one small business managing to hang on. Owner Mo Costello said surviving the pandemic was a matter of “figuring out how to pivot and pivot and pivot,” including closing her dining room and learning how to take orders online.

Costello doubts she would have made it without the support of her neighborhood and the city, which provided MoKaBe’s a zero-interest loan. If other small businesses can benefit from a region-wide support network, she’s all for it.

“We’re only going to make it through this together,” she said.

One expert says St. Louis could be well positioned to benefit from federal spending

Art Phetsadasack, left, and Brian Williams, right, carve a block of ice into an eagle with a chainsaw during the Fete de Glace, an annual ice carving festival and competition, on North Main Street in St. Charles Feb. 6.

A lone pedestrian talks on the phone along Manchester Road in Maplewood on Monday, April, 20, 2020. With few restaurants and businesses open during the stay-at-home order, the popular business/restaurant district empties out after sunset during coronavirus pandemic. Photo by Laurie Skrivan, lskrivan@post-dispatch.com