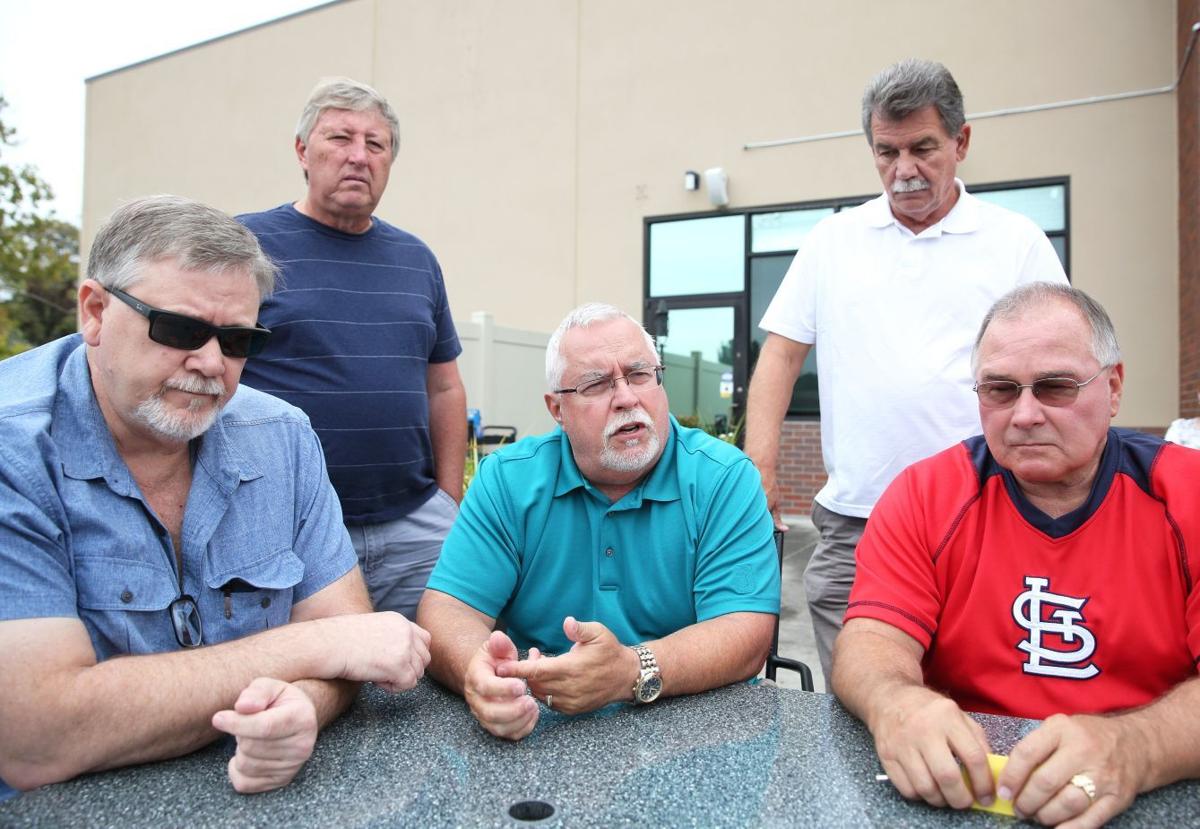 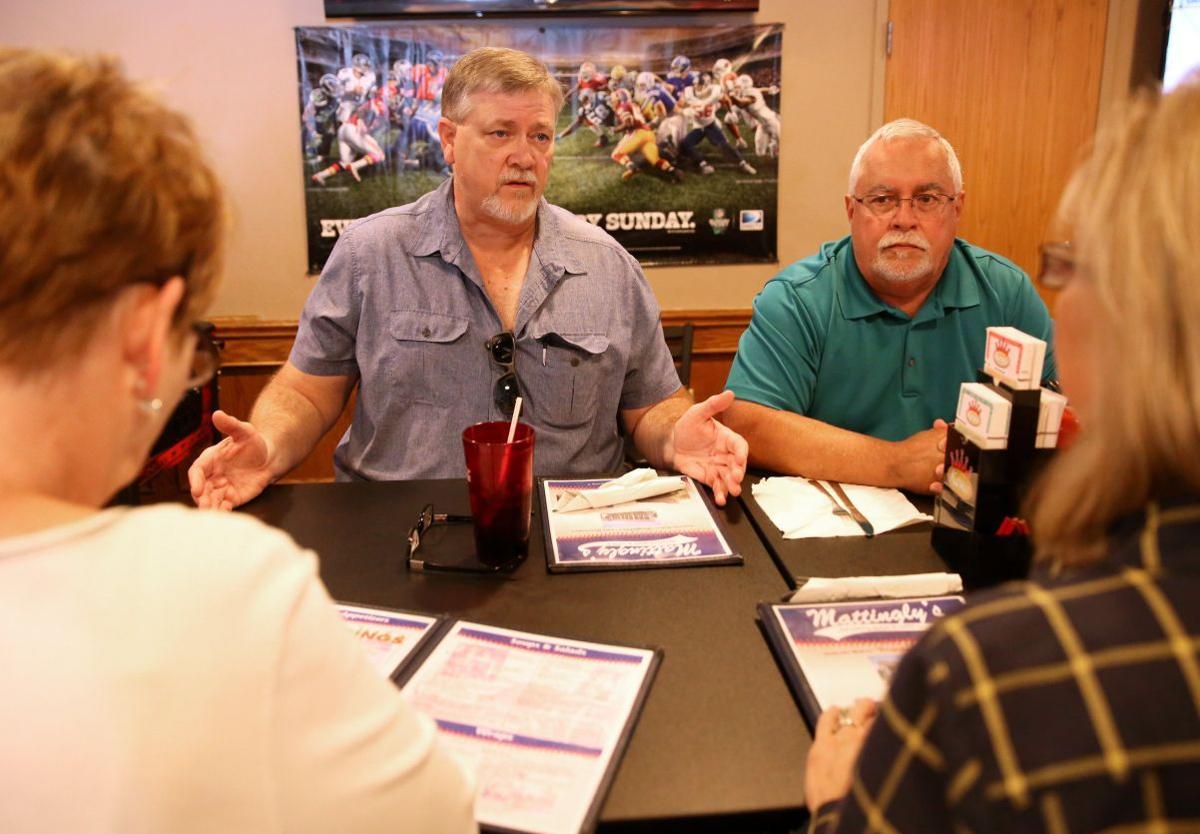 Teamsters retiree Glenn Zichler, of St. Charles, and Joe Dorough, of O'Fallon, talk about the effects their potential pension cuts would have on them during lunch at Mattingly's Sports Bar & Restaurant Wednesday, October 7, 2015. Photo by Roberto Rodriguez 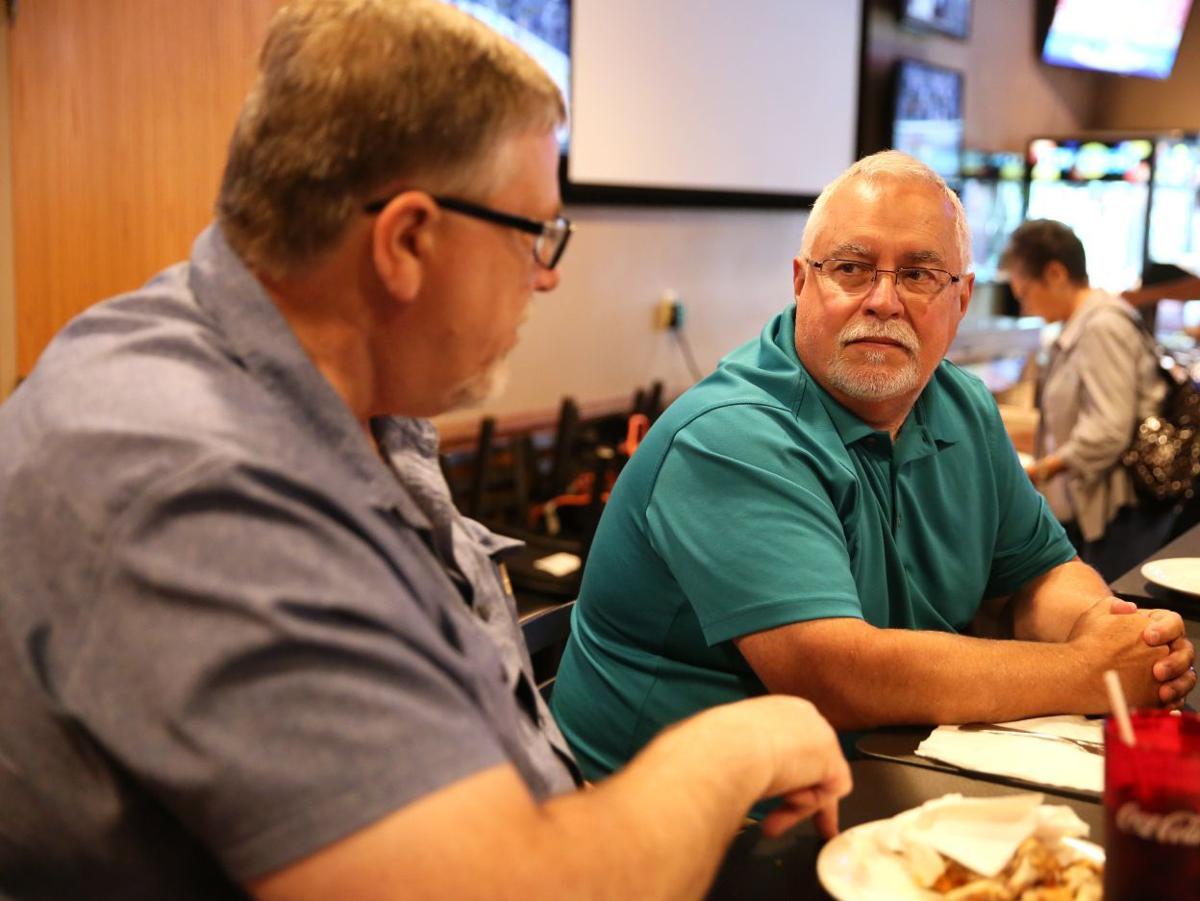 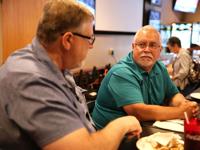 Teamsters retirees Glenn Zichler, of St. Charles, and Joe Dorough, of O'Fallon, talk about the effects their potential pension cuts would have on them during lunch at Mattingly's Sports Bar & Restaurant Wednesday, October 7, 2015. Photo by Roberto Rodriguez 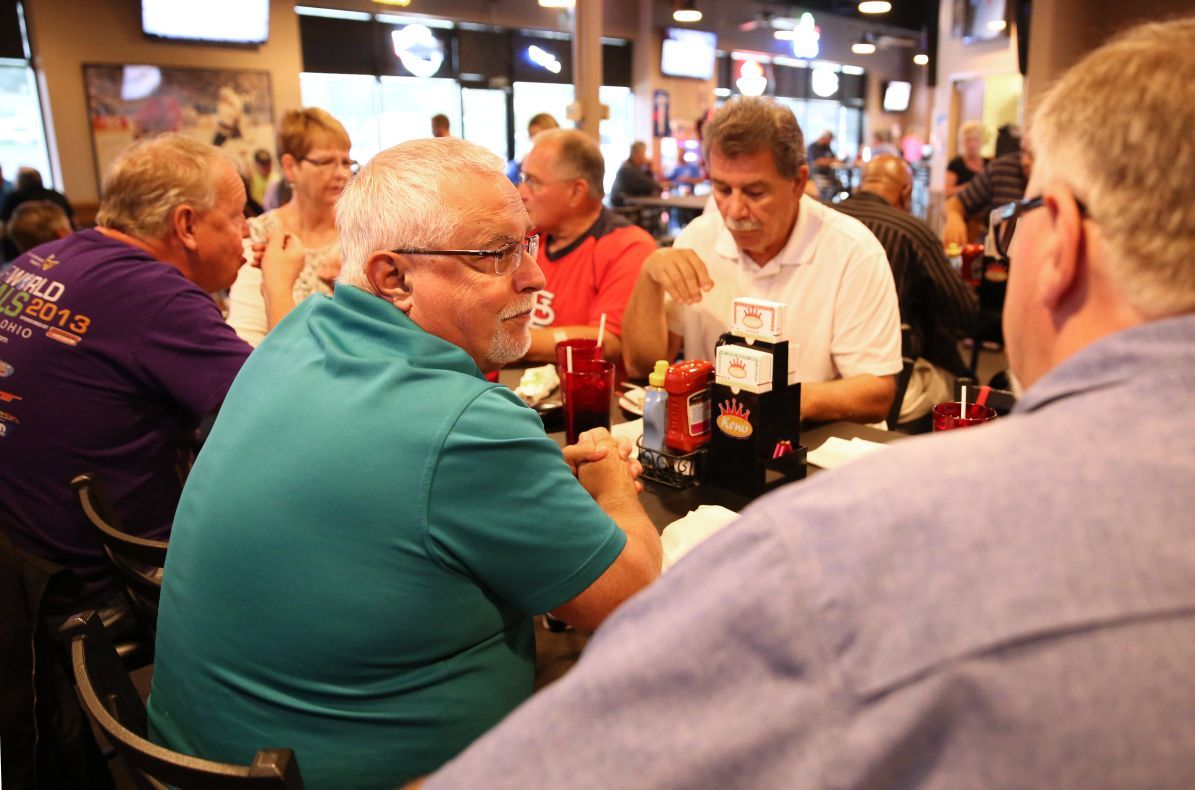 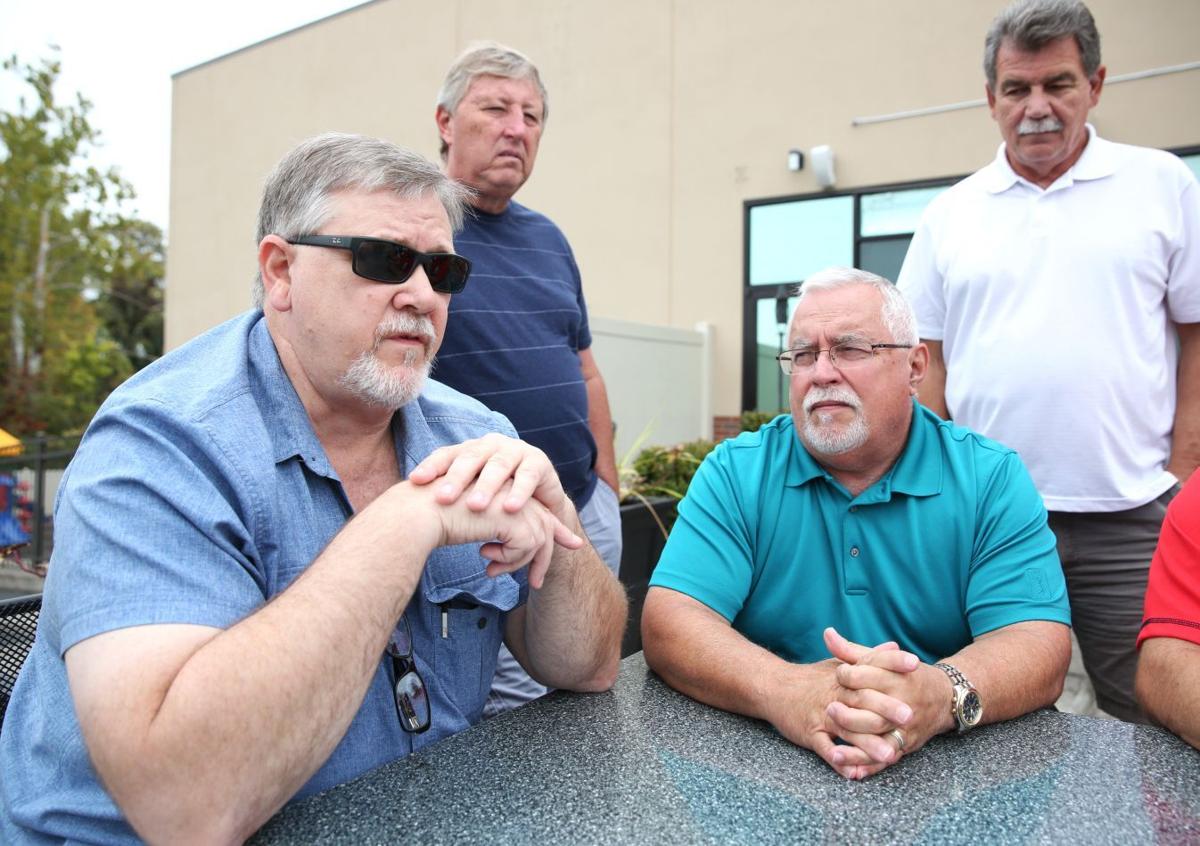 Ron Bommarito was a happy retiree until last week. Then, like more than 100,000 other retired Teamsters, he got a letter that blew his financial future to bits.

Bommarito is 68 and lives in St. Peters. He retired after 32 years as a truck driver and started collecting his Teamsters union pension.

The letter came from the Teamsters’ Central States Pension Fund. It read: “Under Central States’ proposed pension rescue plan, effective July 1, 2016, your monthly benefit is proposed to be reduced from $3,200 to $1,600.”

His pension would be cut in half.

“I was distraught when I found out about it. I couldn’t really talk about it,” he said. “There’s nothing I can do. I’m disabled. I won’t be able to work.”

More than 200,000 retired Teamsters get pensions from the deeply troubled fund, and about 115,000 are getting such letters. Cuts of 40 to 70 percent are common.

Their fate is a warning for millions of others hoping to retire on money from multi-employer pension plans. Their pensions may not be as safe as they seem. Some state and local government pensions are also shaky, as pensioners in Detroit can testify.

The Central States Pension fund — run jointly by employers and the union — says it is slowly going broke. Its leaders say it’s better to cut retirees now than see the entire fund go under in five to 10 years, with no money to pay anyone.

Many Teamsters who aren’t yet retired will also see their benefits trimmed by an average of 14 percent.

“We’re the guys who worked for a living,” said Joe Dorough, 65, a retired trucker from Dardenne Prairie.

“You can work until you’re our age and then they just jerk the rug out from under you,” said Dorough, who notes that leaders of the Teamsters are not having their pay cut.

“These people have no conscience,” said Glenn Zichler, 60, of Harvester, who retired disabled after 30 years driving trucks, mainly for Entenmann’s bakery. Even surviving spouses will take cuts, he notes.

Their case contains a lesson about the current attitude in Washington. In an economic pinch, Congress and the White House will bail out banks and auto companies. But when it comes to workers’ pensions today, it’s let them eat cuts.

Pensions used to be considered very safe, and most still are. Until this year, it was illegal for a pension plan to cut benefits to people who had already retired. Workers were assured that a federal agency, the Pension Benefit Guaranty Corporation, backed pensions.

Now they’re seeing the holes in those assurances.

The truth is that some pensions are safer than others, and Bommarito’s is one of the shakiest.

The PBGC provides a limited guarantee for private “defined-benefit” pensions — the old-fashioned kind that promise a check every month for life. There is no guarantee for “defined-contribution” plans, such as 401(k)s and 403(b)s, now the dominant form of retirement saving. Retirees can spend them down to zero and get no help from Uncle Sam.

There is no federal guaranty for state and local government pensions. Detroit municipal workers learned that the hard way. Their pensions were cut 4.5 percent as part of the city’s bankruptcy, and many ended up owing the city money for “excess interest.” Illinois runs some of the most underfunded pensions in the nation, giving its workers reason for worry.

The PBGC runs two guaranty funds for old-fashioned pensions. One is for single-employer pensions — the kind still run by many old-line companies. If such a company goes broke with an underfunded pension, the PBGC will back a worker’s pension up to $60,136 per year.

But the Teamsters run multi-employer pension plans. When multi-employer plan fail, the PBGC guarantees such pensioners a maximum of only $12,870 per year for people with 30 years service, down to $4,290 for those with 10 years or less.

The agency’s backup fund for multi-employer pensions is in much worse shape than its fund for single-employer ones.

Multi-employer pensions usually stem from union contracts. Many employers and union employees pay into a single pension fund. Management and union officials sit on the pension board.

Multi-employer pensions are common in trucking, construction mining and pop up in other industries too, such as supermarkets. Bakers at Hostess Brands were in a multi-employer union that became an issue in the Hostess bankruptcy.

Trouble hits when employers go broke and stop contributing to the fund, after their employees vest in the pensions.

“Hundreds of employers, including some giants of the trucking industry, have left the fund, gone bankrupt or are out of business,” said Central States Executive Director Thomas Nyhan in his recent letter to pensioners. “We simply can’t stay afloat if we continue to pay $3.46 in pension benefits for every $1 paid in from contributing employers.”

NO APPETITE FOR BAILOUT

Optimists have always thought that, if the PBGC got in trouble, Congress would step in with a bailout rather than risk the wrath of the gray-haired set.Nyhan says he tried. In 2010, when Democrats controlled both houses and the financial bailouts were in full swing, he went begging on Capitol Hill.“We were told in no uncertain terms that there would be no bailout,” said Nyhan in an interview.

Sen. Bernie Sanders, a Democratic presidential candidate from Vermont, has a bill that would bail out multi-employer pensions, financed by closing two tax breaks used mainly by the wealthy and heirs to multi-millionaires. The bill is in committee.

Pension plan members will get to vote on the plan. If they reject it, however, the Treasury Department can override their rejection.

Current projections say that the Central States Fund can pay its pensions until 2026, and retirees point out that lots can happen before then.

But Nyhan doesn’t think he has that long. If the plan is rejected, working Teamsters and their employers will see the writing in the wall. They won’t keep paying into a fund that’s bound to go broke. If that happens, the fund might go broke in about five years, says Nyhan.

The proposed cuts would fall unevenly. Retirees whose employers went out of business would take the deepest cuts — seeing their pensions reduced to a maximum at $14,157 for workers of 30 years service or more. Retirees older than 80 would see no cuts.

PBGC officials say the reform law gave them three years of breathing room on their multi-employer insurance fund. “It is more likely than not that the program’s assets will be depleted in 2025, compared with 2022 in last year’s report, and the risk of insolvency grows rapidly thereafter,” the agency said last month.

The insurance fund for single-employer plans covers 31 million people. It is in much better shape and improving. It is “highly unlikely to run out of funds in the next 10 years,” the PBGC reported. Still, the PBGC’s projections show a long-term deficit, meaning that it may eventually go broke.

The Central States fund has a shady history — which its retirees have not forgotten.

Back in the 1970s, the fund was nicknamed “the Mob’s Bank,” known for making loans to Las Vegas casinos, at a time when Teamster leadership was tied to organized crime. The union underwent 25 years of strict federal supervision, which ended earlier this year.

Retirees facing cuts are pondering a cheaper lifestyle. Those over 62 can get Social Security. Some of their spouses work. But they had planned their finances around a full pension. Many still have car and house payments.

Rich Mitchell retired five years ago after 30 years driving trucks. “I didn’t know I was going to get kicked in the teeth,” he said. His $2,692 monthly pension would be cut to $1,251.

“After the house payment, there won’t be much left,” said Mitchell, who used to haul bottles and cans from the Anheuser-Busch brewery, among other jobs. His wife is putting off her plans to retire, and Mitchell is thinking of looking for a job.

“Not many people want to hire 60-year-old guys,” he said.

Truckers' pensions, one of the nation's largest, could soon cut benefits for retirees

If Treasury approves the proposal by Central States, retirees could see their paychecks shrink by July 1

Ascension, the Edmundson-based parent company of the nation’s largest nonprofit health system, has agreed to settle a 2013 class-action lawsui…

Bill McClellan: Pulling the rug from under retirees

Teamsters retiree Glenn Zichler, of St. Charles, and Joe Dorough, of O'Fallon, talk about the effects their potential pension cuts would have on them during lunch at Mattingly's Sports Bar & Restaurant Wednesday, October 7, 2015. Photo by Roberto Rodriguez

Teamsters retirees Glenn Zichler, of St. Charles, and Joe Dorough, of O'Fallon, talk about the effects their potential pension cuts would have on them during lunch at Mattingly's Sports Bar & Restaurant Wednesday, October 7, 2015. Photo by Roberto Rodriguez