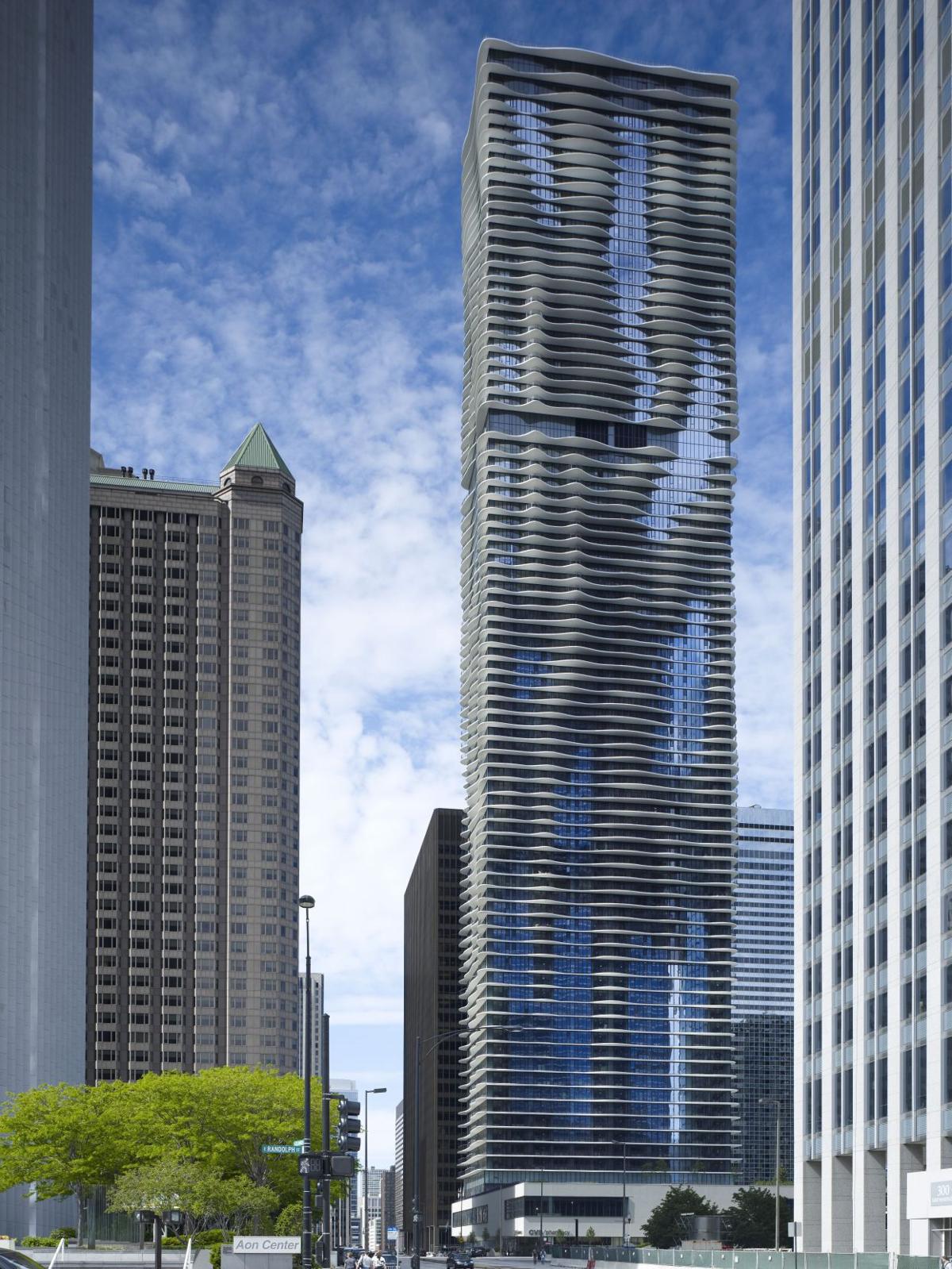 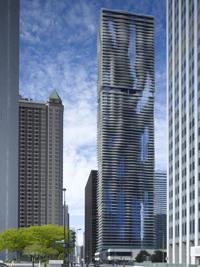 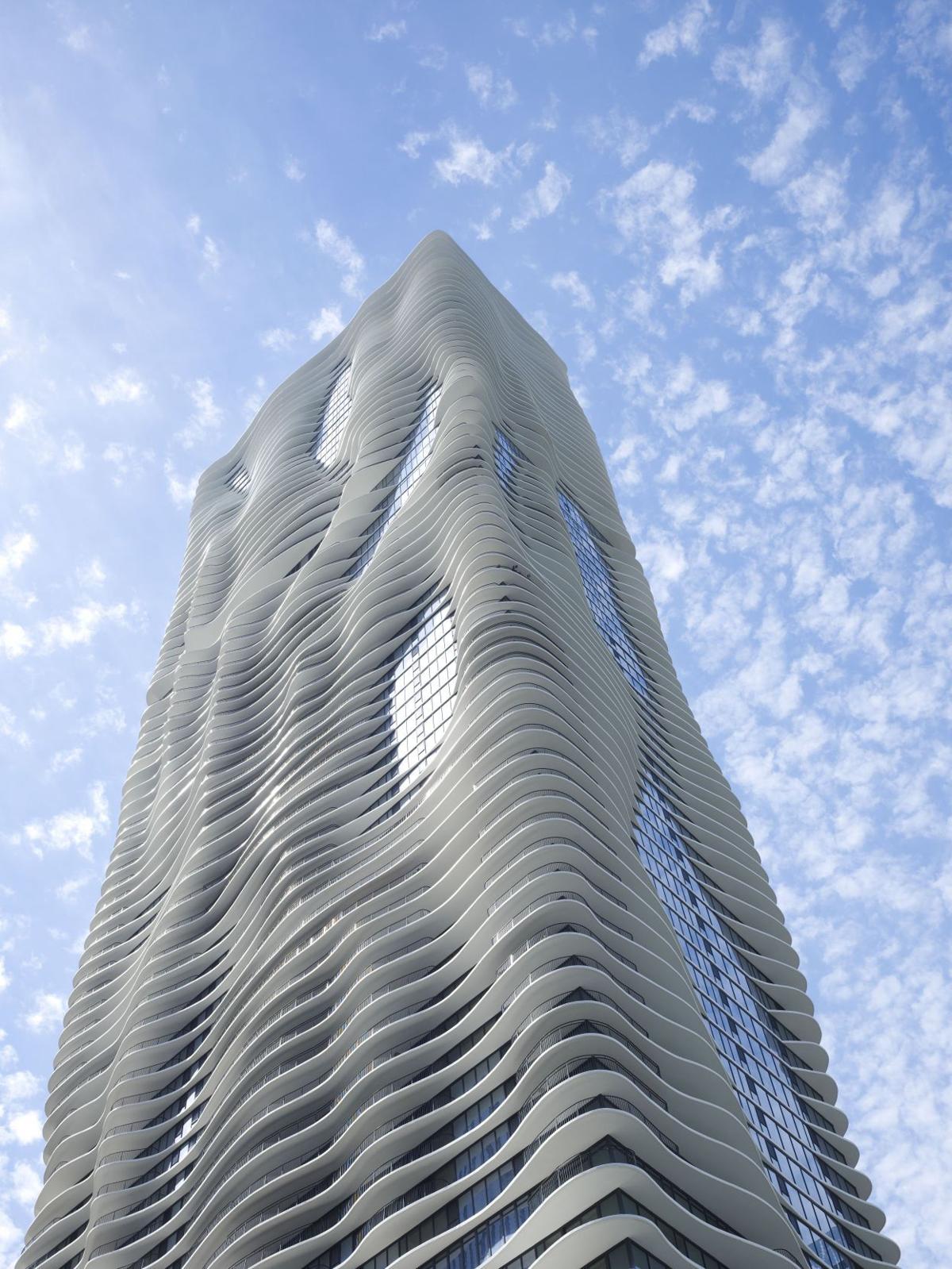 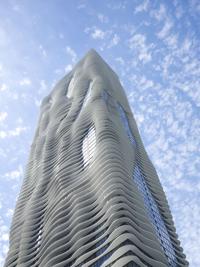 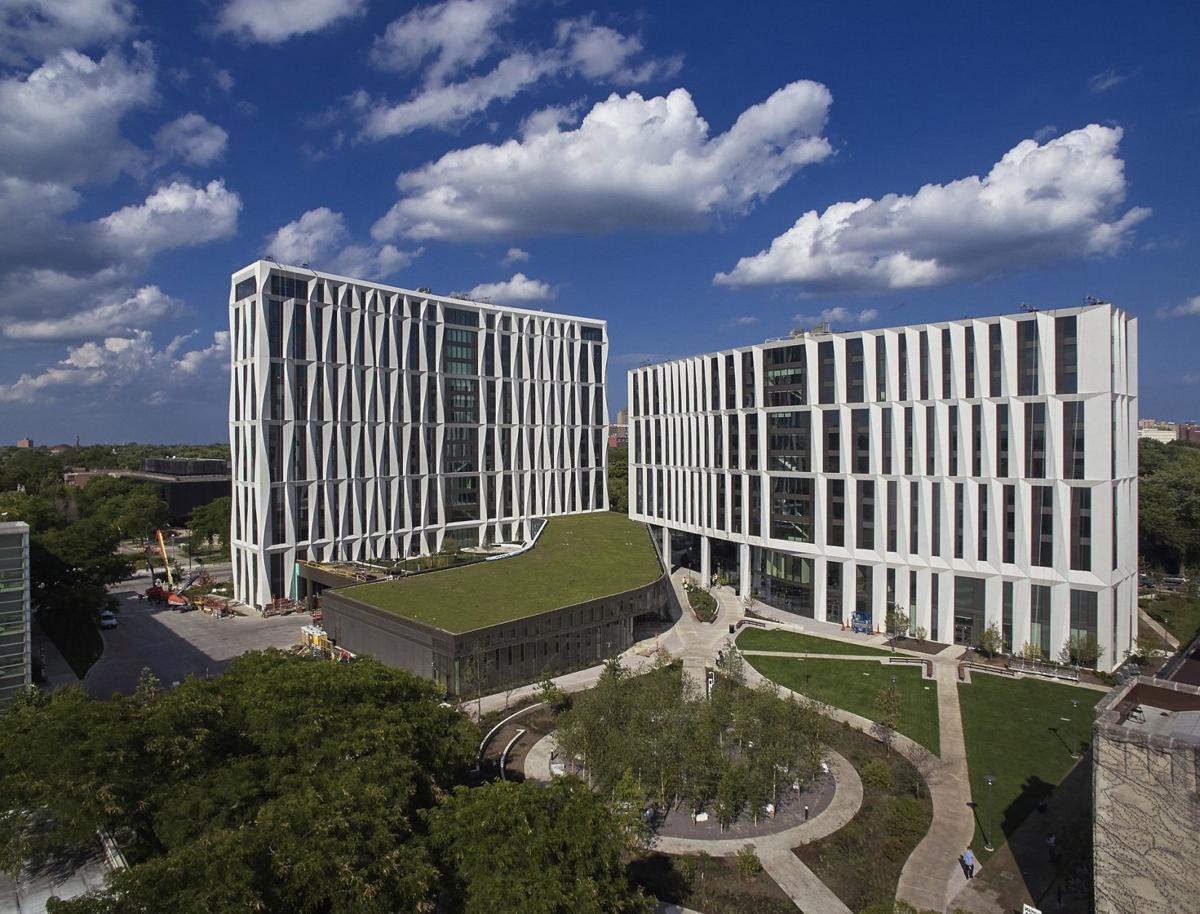 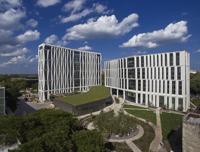 The University of Chicago Campus North Residential Commons by Studio Gang Architects fits 800 student beds into 394,000 square feet of space. The building are organized into eight houses of 100 students. The complex includes a common area, 5 music practice rooms, 14 group study spaces and a 24-hour reading room. The exterior is wrapped in more than 1,000 concrete panels and features a 2-way radiant heating and cooling slabs. Photo courtesy of Studio Gang Architects 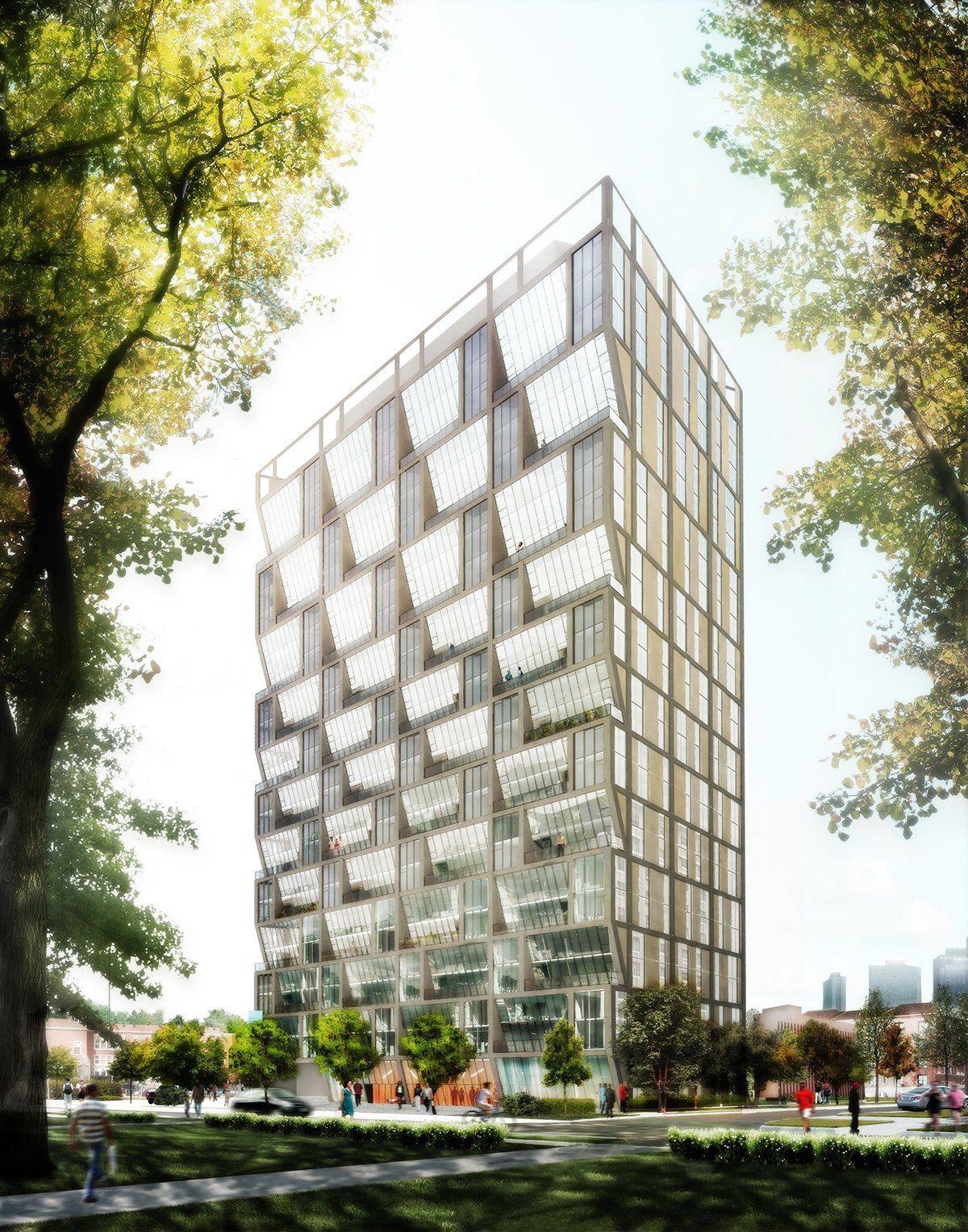 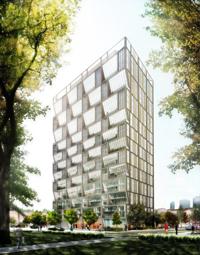 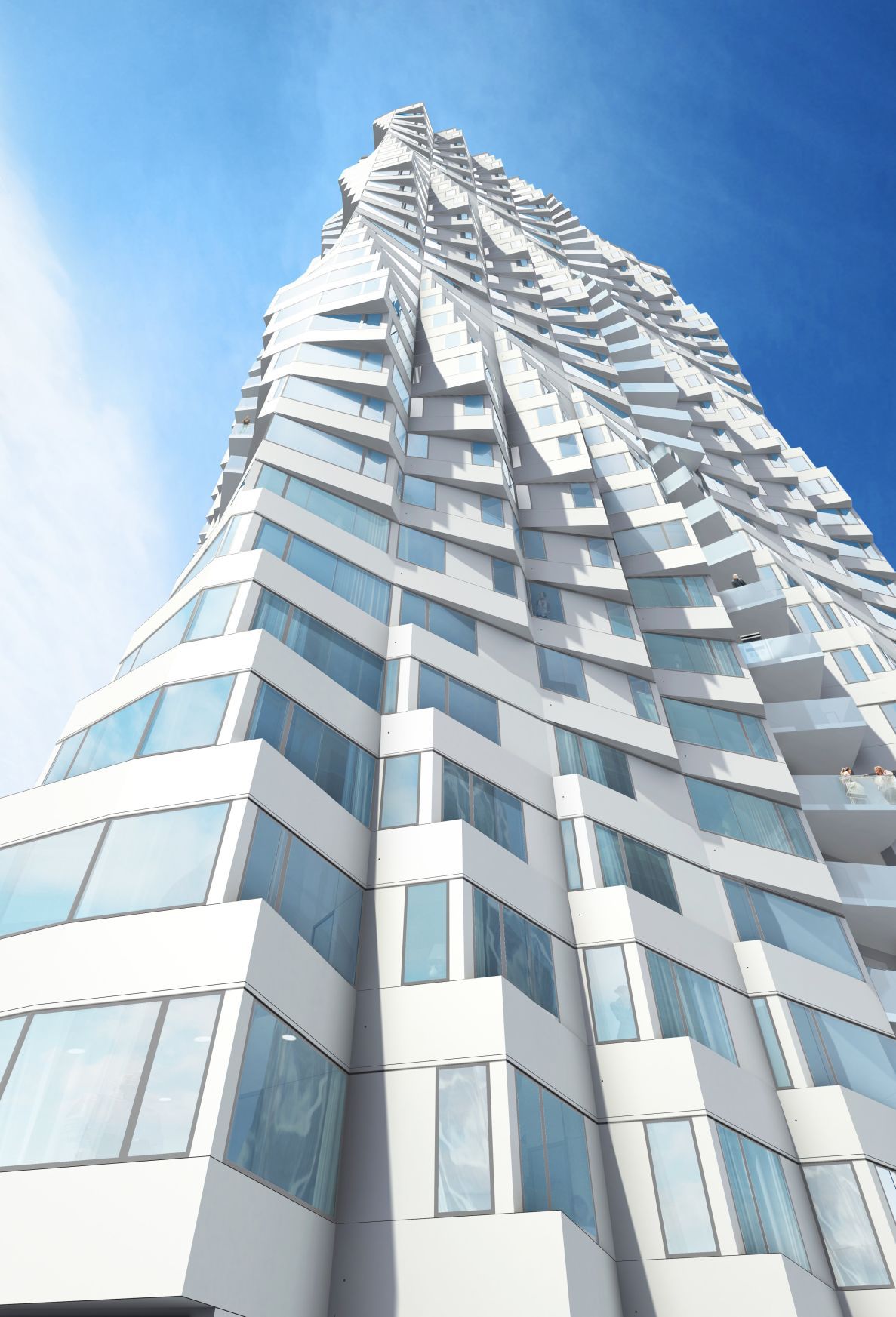 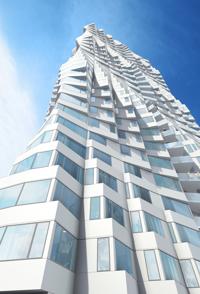 A 36-story, strikingly modern apartment tower is expected to rise next year from a Central West End parking lot and top out as the city of St. Louis’ tallest residential building.

The project’s architect is Studio Gang, headed by Jeanne Gang, a 2011 MacArthur Foundation fellow whose designs include the acclaimed Aqua Tower in Chicago.

Aside from the 630-foot Gateway Arch, the Kingshighway apartment building — named One Hundred — will look up in St. Louis to only the Metropolitan Square, One AT&T Center, Eagleton U.S. Courthouse, U.S. Bank Plaza, Laclede Gas, Southwestern Bell and Civil Courts buildings.

One Hundred’s developer is Mac Properties, of Englewood, N.J. The private real estate firm plans to begin construction within a year and complete the approximately $130 million project in 2019.

Under founding principal Gang, Chicago-based Studio Gang’s emphasis on nature produced Aqua Tower and Solstice in the Park, among others. Studio Gang describes the 82-story Aqua Tower as a vertical landscape of hills, valleys and pools. Solstice, also in Chicago, is underway as a 26-story residential building with angled exterior windows that maximize winter daylight and minimize summer heat.

Gang said Thursday that One Hundred is designed to give its residents wide views of Forest Park to the west and the Arch to the east. Each of its 305 apartments will have a corner living room to increase the amount of interior daylight. One Hundred’s facade of angled glass is intended to enhance residents’ views and to save energy.

“In a climate with four distinct seasons, we wanted to make it possible for residents to enjoy the different views and natural changes in light over the course of the year,” Gang said. “By experimenting with the geometry of the facade and refining the apartment layouts, we were able to make every apartment into a corner unit perched above the park and city.”

Tiers of four stories will repeat over the height of the building, with the facade’s angles producing outdoor terraces for a fourth of the apartments. Working with opportunities provided by the site orientation and environmental forces, the building’s leaflike shape and tiered design will cut energy use and increase residents’ comfort, Gang said.

Glass walls sloped outward will make the apartments seem larger, said the architect, adding that One Hundred’s design also is intended to show that “people live in the building.”

Gang is likely the most celebrated architect to work in St. Louis since Philip Johnson and Tadao Ando.

One Hundred’s design has a 355-vehicle parking garage, including one level underground. In addition to parking, the building’s five-story base will have 882 square feet of shop space and 6,756 square feet of “amenity space.”

Eli Ungar, founder of Mac Properties, said about 40 percent of the apartments will have one bedroom. About 40 percent will have two bedrooms and the remainder will be divided equally between studio and three-bedroom units. Rents near $3 per square foot per month, high for St. Louis, are possible in a neighborhood as “exquisite” as the Central West End, he said.

One Hundred will be the growing neighborhood’s “newest and shiniest” development and will be “in line with the nicest stuff in Clayton,” Ungar said.

Mac Properties, founded in 2002, already owns St. Louis apartment buildings, including the Dorchester, at 665 South Skinker Boulevard, and the Montclair and Parc Frontenac apartments on Kingshighway near the One Hundred site. The company has owned the site for years and has long wanted to build on it.

Another Mac Properties project in St. Louis is the 220-unit apartment building planned as part of the latest expansion at the Cortex tech district in the Central West End.

The company specializes in new construction and historic renovation of apartment buildings.

The city’s Land Clearance for Redevelopment Authority is scheduled to consider One Hundred’s tax abatement plan at its meeting Tuesday.

Roddy said One Hundred will further the Central West End as the city’s primary “car-optional neighborhood.”

“I think the project will become an overnight landmark for St. Louis,” he said.

Roddy has scheduled a public meeting for 7 p.m. Monday at the Schlafly branch library, 225 North Euclid Avenue, to discuss One Hundred with neighborhood residents. Mac Properties and Studio Gang representatives are scheduled to attend.

One Hundred site not always a parking lot

A hotel occupied the Kingshighway site for about 70 years

He’s the latest member of the old guard to step aside amid the rise of the city’s young progressives.

The University of Chicago Campus North Residential Commons by Studio Gang Architects fits 800 student beds into 394,000 square feet of space. The building are organized into eight houses of 100 students. The complex includes a common area, 5 music practice rooms, 14 group study spaces and a 24-hour reading room. The exterior is wrapped in more than 1,000 concrete panels and features a 2-way radiant heating and cooling slabs. Photo courtesy of Studio Gang Architects 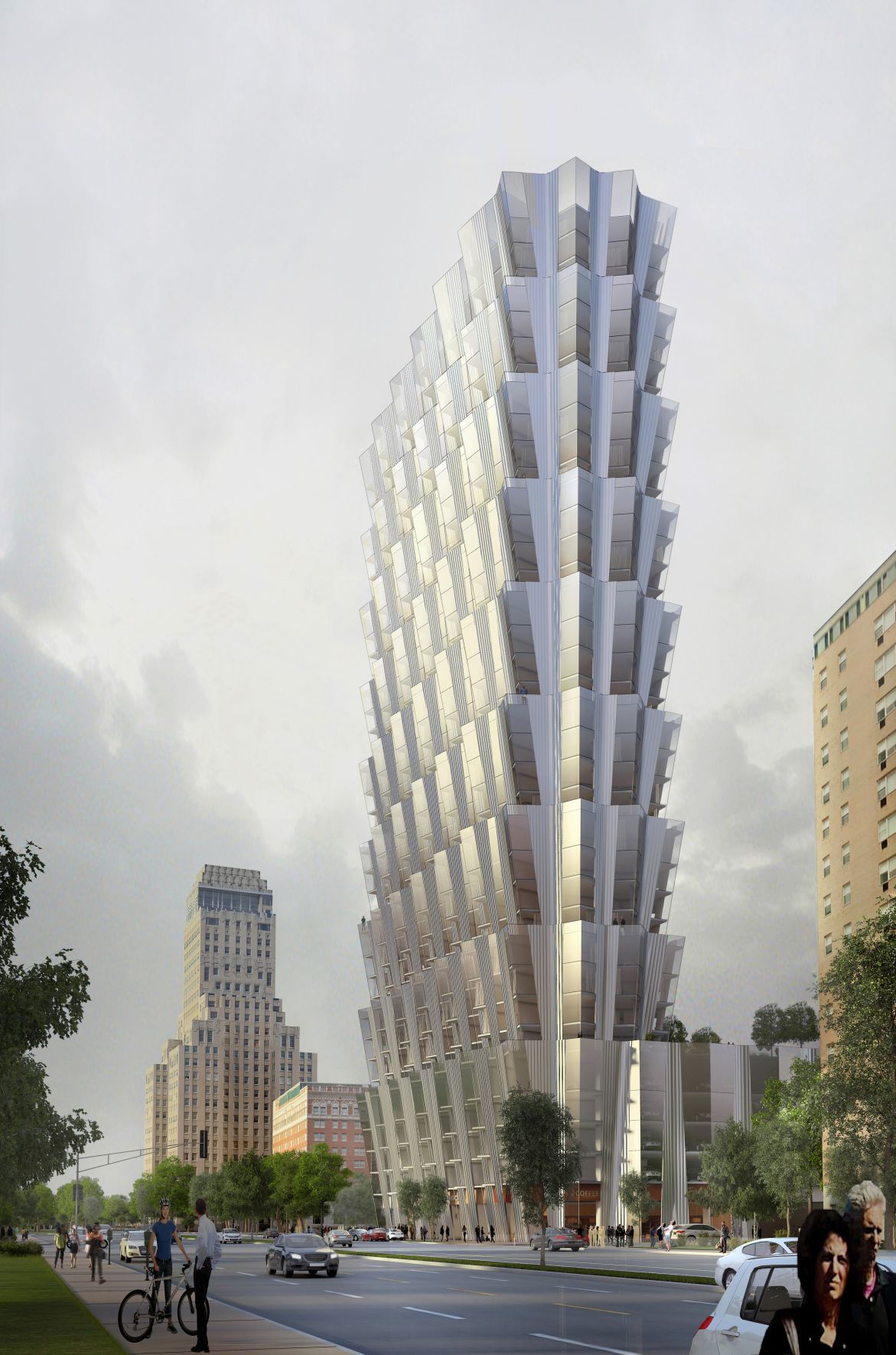 Renowned Chicago-based architecture firm Studio Gang Architects has been commissioned to design a 36-story residential tower in the Central West End. Situated between Chase Park Plaza (pictured at left) and Park East Tower, the complex at 100 North Kingshighway (and named One Hundred) will rise to about 360 feet, taller than its neighbors. Rendering by Studio Gang Architect