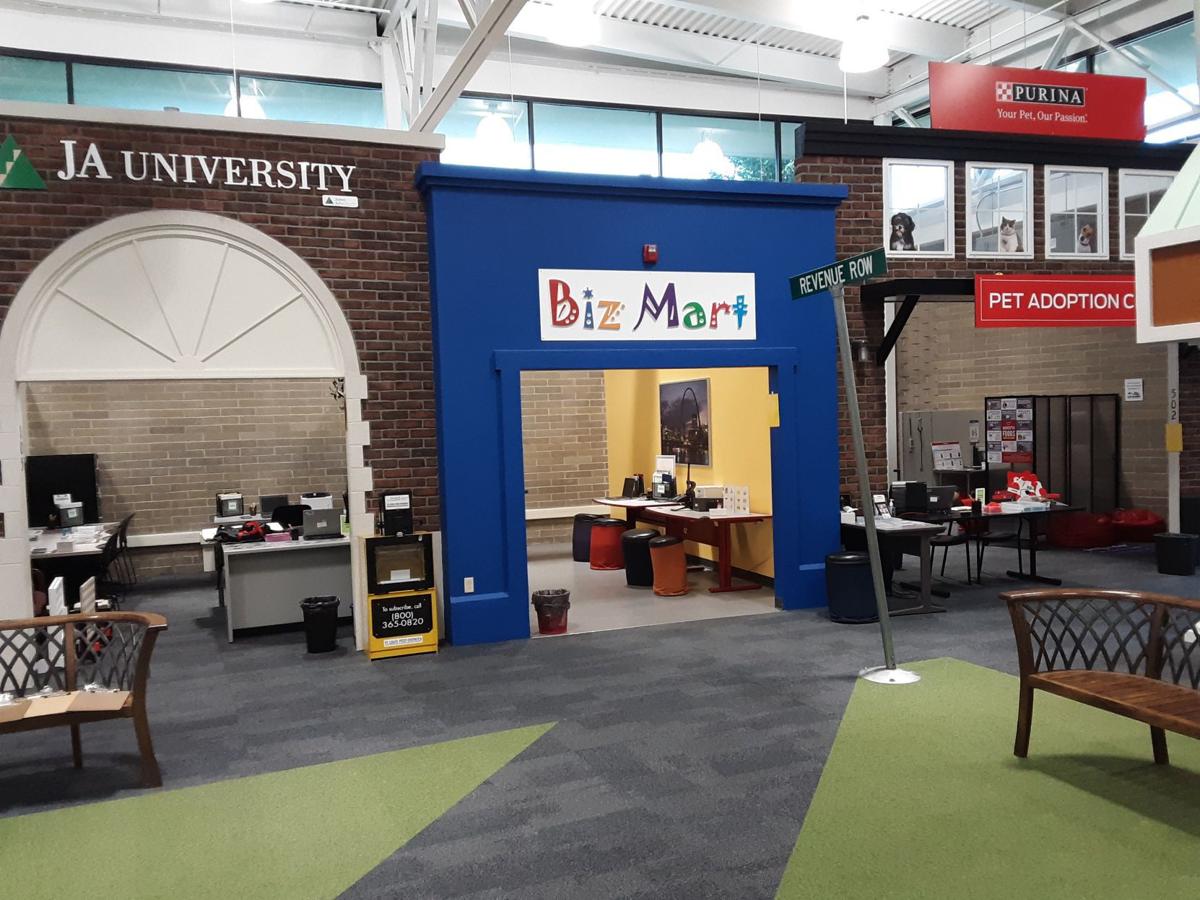 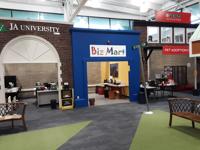 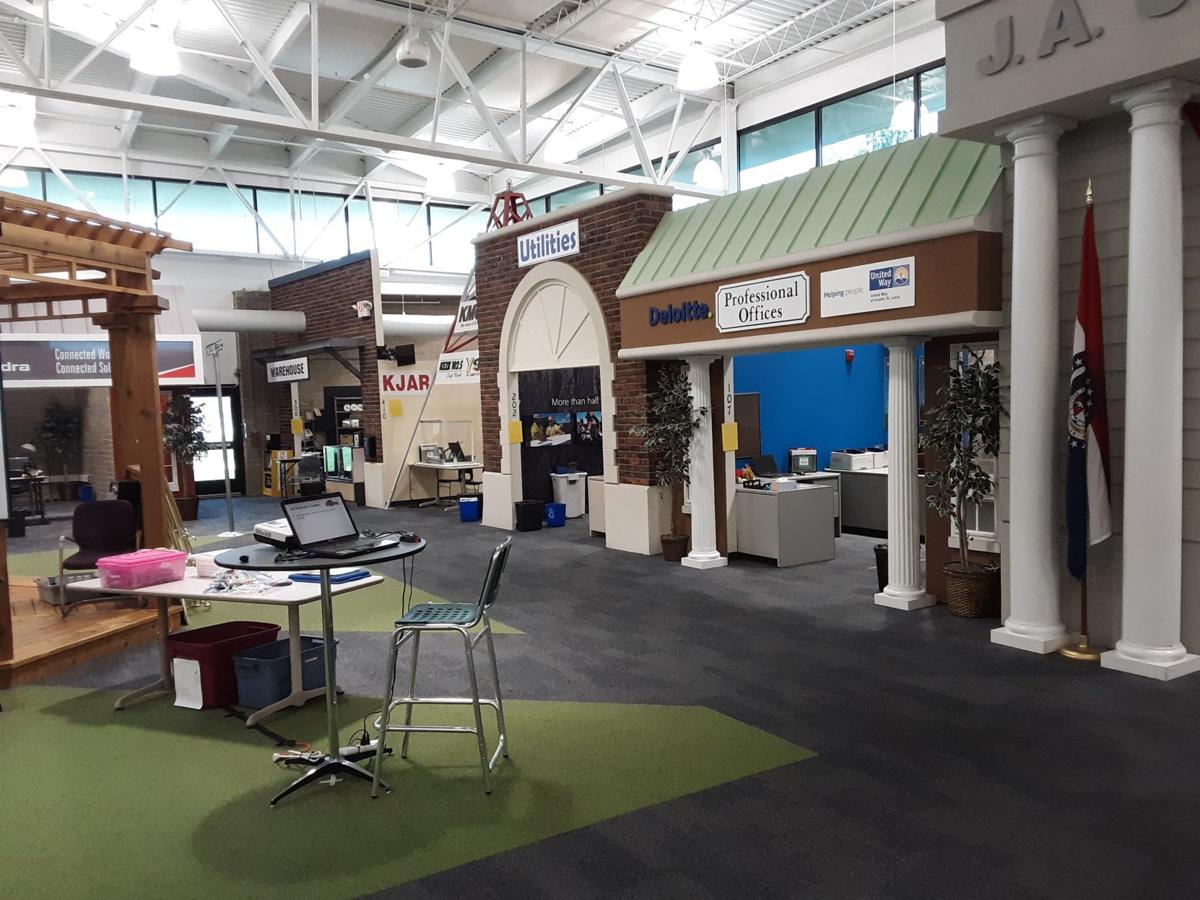 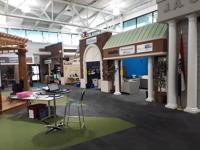 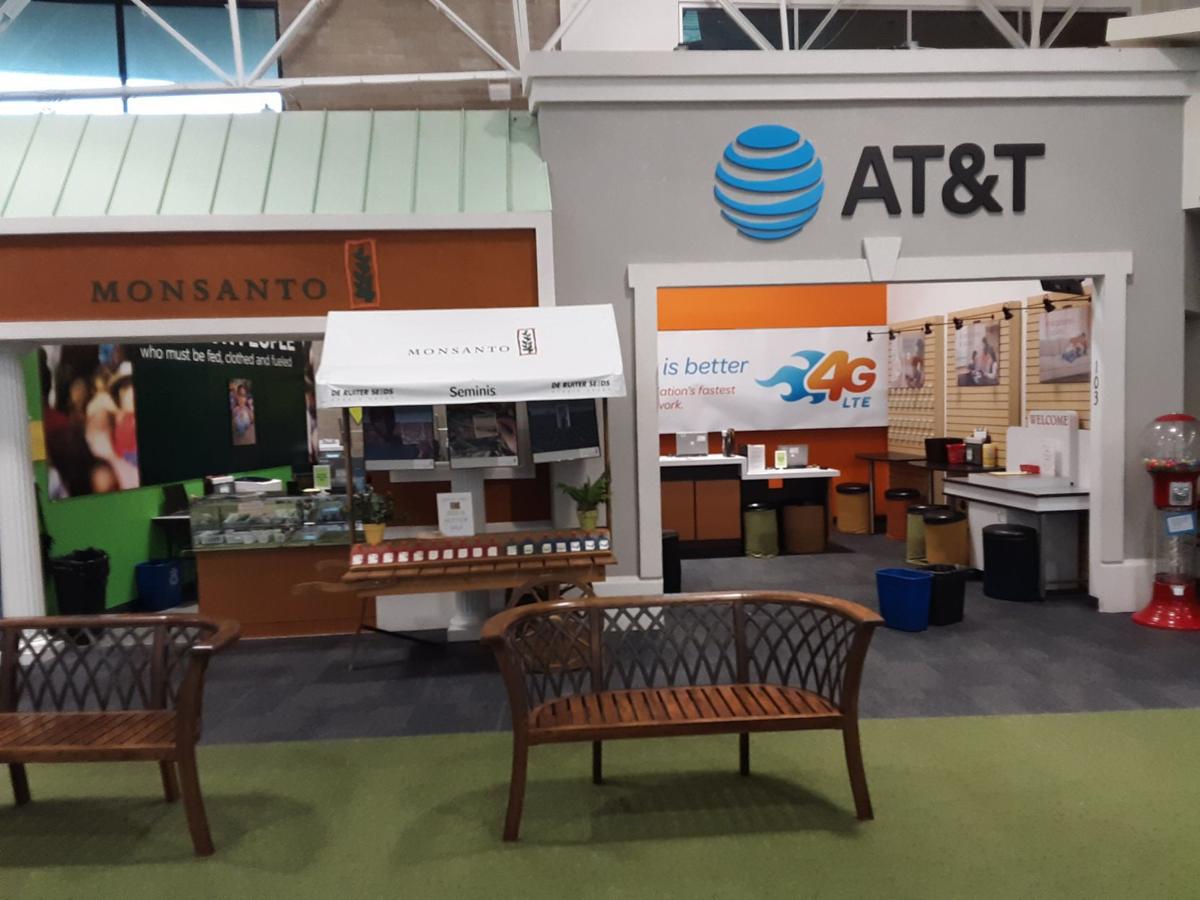 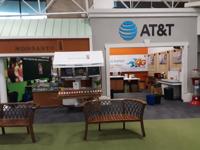 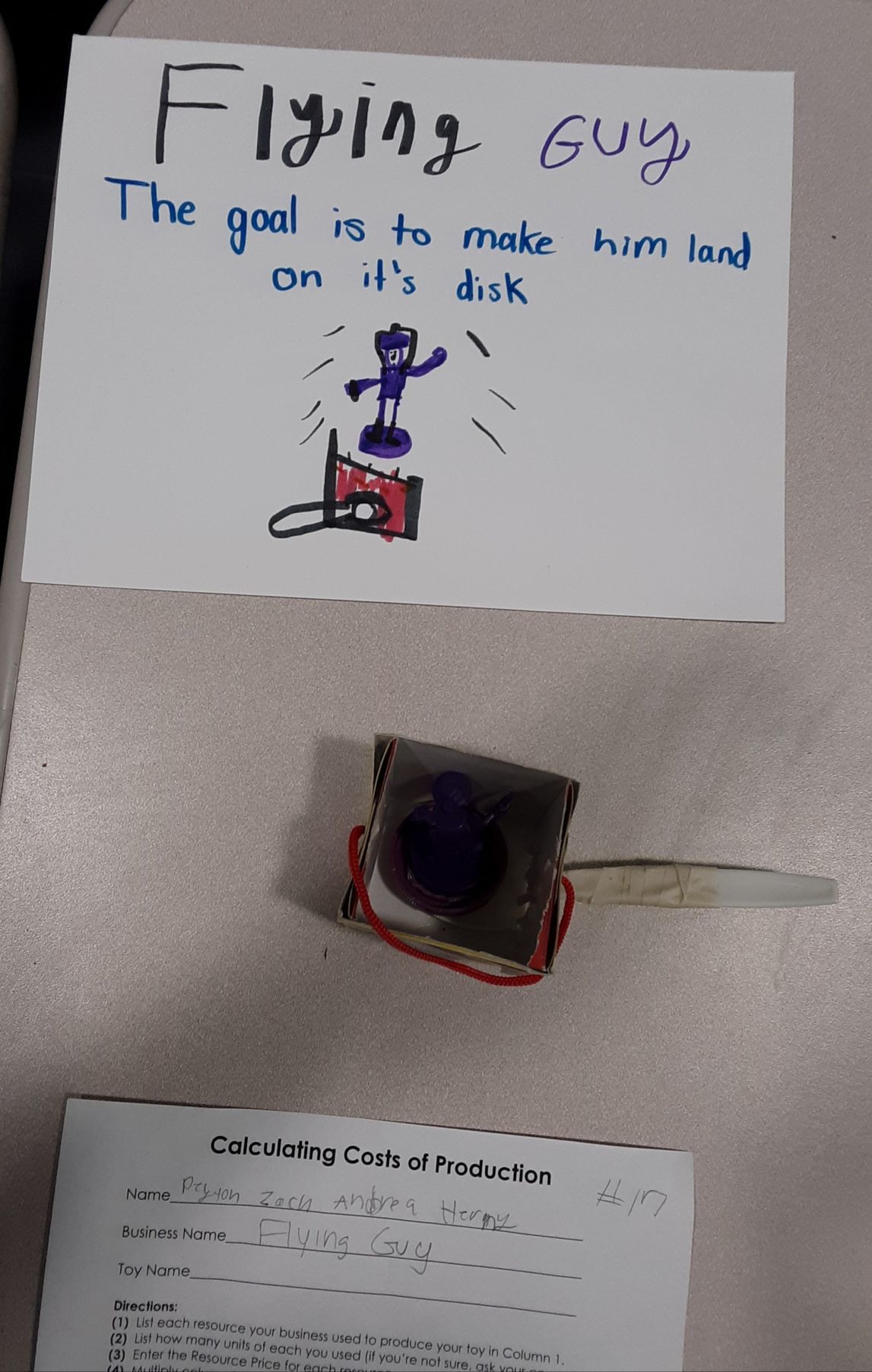 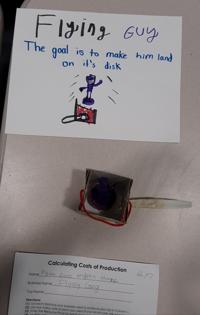 Flying Guy, a toy developed by campers at JA BizTown in Chesterfield, is meant to be propelled into the air by a spoon and then caught in the box. Photo by Colleen Schrappen, cschrappen@post-dispatch.com

Sophie really enjoyed her stint at Smokehouse Market, ringing up cookies and popcorn for hungry customers.

She wants a career change, though. Maybe a job at a hospital. Or as a newscaster.

She doesn’t have a lot of time to decide. It’s Tuesday, and her job application is due Thursday.

But at the moment, Sophie, 12, is focused on how Lava Toss is faring. She invented the ball-and-cup game with her Crestview Middle School classmate Anvi, 11, and two other young entrepreneurs at JA BizTown Camp, held last week at Junior Achievement of Greater St. Louis in Chesterfield.

The weeklong camp, one of three that Junior Achievement holds each summer, is for youngsters with an interest in business and entrepreneurship.

Sophie and Anvi had already worked at BizTown once, at the end of their school’s Junior Achievement program. Taking over the town — which has 17 workplaces, including a bank, radio station, wellness center and utilities — is the capstone of summer camp.

Prior to their employment in BizTown, campers practice such overlooked life skills as balancing a checking account, using a debit card and learning how to barter. They also team up for projects; Lava Toss was born of an assignment to invent, market and finance a new toy. Teams present the toy to their campmates, who vote on a favorite.

Campers earn JA money throughout the week, but the real commodities are the dollar-store treasures they can buy with their earnings — superballs, neon bracelets, crocodile-head clackers. …

“They don’t sit at a desk and do schoolwork all day,” said camp director Karen Muzzy. “Each activity is interactive. They are really about working as a team.”

It’s teamwork that earned the Flying Guy crew a visit to the red treasure chest full of trinkets, their reward for nabbing first place in the toy-invention challenge.

Campers sorted through mounds of old oatmeal containers, seashells, beads, pipe cleaners and Pringles cans. Each team had $5 to purchase their materials and to pay themselves salaries of 50 cents apiece. They determined a sale price, took hypothetical orders and calculated their revenues or losses.

Zach, 12, and his 9-year-old sister, Peyton, worked with Henry and Andrea, both 10. They had spent the previous afternoon brainstorming and putting together prototypes.

Their process was straightforward:

“We come up with something and we agree on whether we do it,” said Peyton, who will be a fourth-grader at Henry Elementary in the fall. “And if we don’t, we do something else.”

After a little back and forth, and the discovery of a purple plastic figurine among the pile of castoffs, someone thought of making “a flying guy.” By that point, the ideas were popping so quickly, the foursome wasn’t even sure who made the suggestion.

Zach found a spoon to propel the little fellow, and Henry made a landing target out of a small box. They affixed him to a milk cap for added stability. Flying Guy garnered about a fourth of the 40 campers’ votes, besting even the Ploctopus, a foam sea creature with tentacles that can be braided.

During the week’s activities, campers start to learn what kind of jobs they have an affinity for, said Muzzo. “We spend some time going through their ‘likes.’ Do you like building things? Selling things? Talking to people?”

The self-assessments help them determine which BizTown jobs they want to shoot for. On Thursday morning, they fill out the application, explaining why they would make a good veterinarian, art director or mayor. They will have already checked out the town’s businesses, some of which are sponsored by actual companies, like AT&T, Tech Mahindra and Nestlé Purina PetCare.

Once their positions are set, they come up with an “innovation plan” with their co-workers to drive traffic to their business. That might be a portable dog-washing service, a new kind of cookie at the market or a raffle.

“City Hall always wants to have a giveaway,” said Muzzy. “Instead of just coming in to vote, you get a giveaway.” Not surprisingly, BizTown has much higher voter-participation rates than the rest of America.

BizTown workers can take breaks to exercise at the wellness center, request a song from the radio station or get an ID made at the print shop.

Muzzo is something of the human resources manager, fitting the right camper with the right job. It can be tricky, though. “Everybody wants to be the DJ,” she said. “Or the TV on-air personality.”

Not 10-year-old Christian. The soon-to-be fifth-grader at Wildhorse Elementary is a graduate of Junior Achievement’s camp for younger students, JA Biz Wizards. He knows the ropes of BizTown.

“For my first pick, I want to be CFO at Deloitte,” he said. “My second pick is CFO at First Bank, and then CFO at Monsanto.”

“I like that they have a lot of work to do.”

Flying Guy, a toy developed by campers at JA BizTown in Chesterfield, is meant to be propelled into the air by a spoon and then caught in the box. Photo by Colleen Schrappen, cschrappen@post-dispatch.com