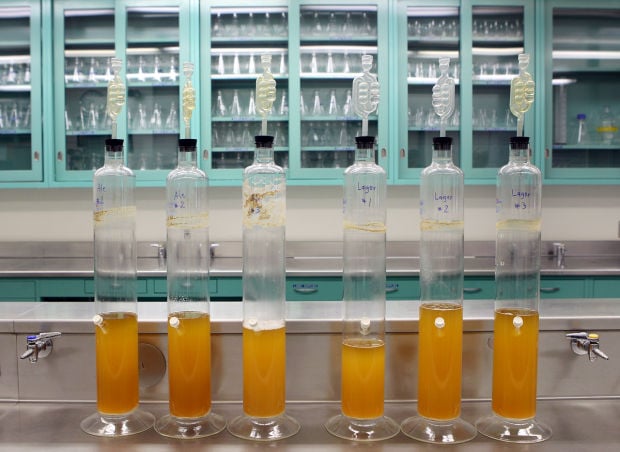 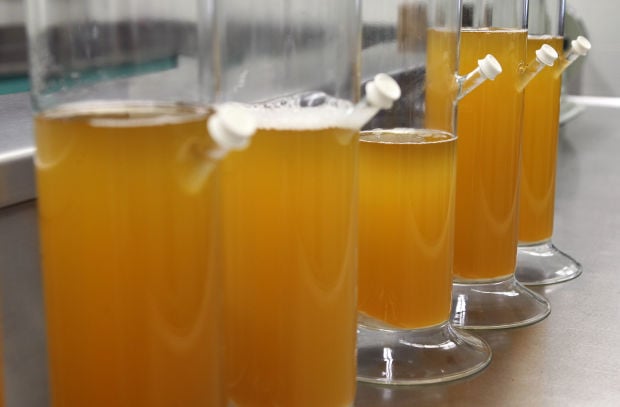 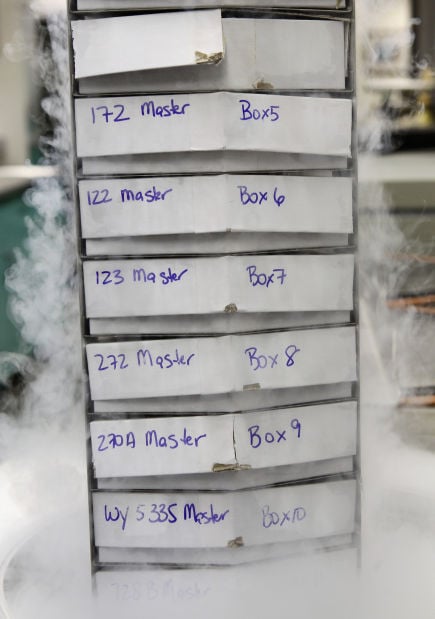 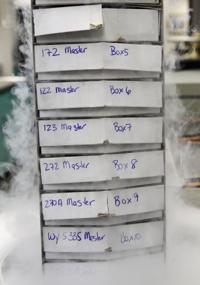 Strains of yeast that are being cryogenically frozen at Anheuser-Busch's Culture Yeast Center, on Thursday, Sept. 12, 2013 at Anheuser-Busch in St. Louis. Photo by Stephanie S. Cordle, scordle@post-dispatch.com 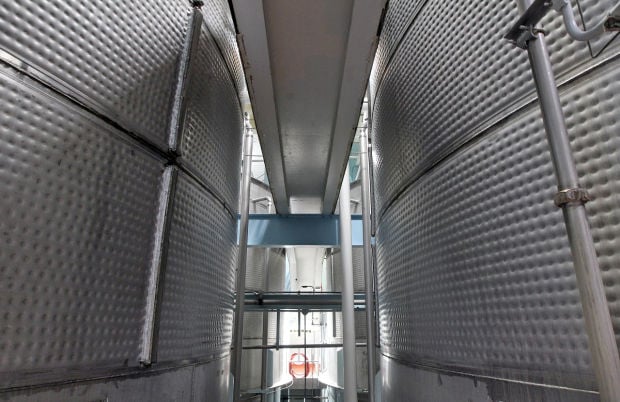 St. Louis has its very own Fort Knox in the heart of the sprawling Anheuser-Busch brewery complex south of downtown. What’s guarded inside isn’t gold, but it’s just as valuable: yeast strains for all the brewer’s beers, including the yeast for every Budweiser sold around the world.

Across from the Clydesdales’ stable and near the brew house sits a windowless, three-story brick building that’s under 24-hour video surveillance. Card readers allow only a small number of authorized entrants. The yeast center’s staff is purposely small — only five employees. The public tours don’t stop here.

Inside the heavily secured facility are five locked cryogenic tanks, each about the size of a dorm-room refrigerator.

Only one key exists to open the tanks, which hold the mother cultures for A-B’s yeast at a bone-chilling minus 305 degrees Fahrenheit. The guardian of that key is Kendra Bowen, manager of the yeast center since 2010.

“A very select few people have access to the yeast,” Bowen said. “It’s all about keeping our yeast secure.”

The flagship Budweiser lager strain traces its origins directly to the yeast strain used when the beer was introduced in 1876.

Earlier this month, A-B let a small group of journalists inside the building for a rare glimpse of its Corporate Culture Yeast Center.

“This is the first time we’ve let people from outside the company in the yeast plant since it was built in 1976,” said Jane Killebrew-Galeski, A-B’s director of zone brewery support for brewing, quality and innovation.

Yeast can account for more than 50 percent of a beer’s taste, especially for a lager like Budweiser, according to Paul Cobet, brewmaster and technical center director.

“It’s a significant contributor to the overall flavor profile of Budweiser, not only for aroma, but the crisp, clean finish,” he said. “So much is discussed about malts and hop varieties, you don’t hear much about yeast.”

Other types of beers, such as A-B’s Shock Top, which is a Belgian style wheat ale, derive less of their flavor from yeast, Cobet said.

The yeast strains at the St. Louis facility supply all A-B beers brewed in the United States and Canada. An identical set of the yeast strains exists at only two other locations worldwide — A-B InBev’s headquarters in Leuven, Belgium, and another secure site on the St. Louis brewery grounds.

A-B also has hundreds of yeast strains in storage that aren’t being used. The company has increased the number of strains it actively uses from three in 2008 to 19 today as its new product pipeline has increased.

“When you’re looking to do new products, it helps to have a big tool kit to choose from,” Killebrew-Galeski said. The company also took on oversight of several yeast strains through its 2011 acquisition of Chicago brewer Goose Island.

Prior to 1976, A-B’s yeast was held in a smaller facility for decades elsewhere on its campus. Throughout its history, A-B has kept sets of its yeast strains in more than one location at the brewery to decrease the chances of losing them in a fire or other calamity. Rising sales prompted the construction of the current facility.

“The company was growing, so they needed to produce more yeast,” Cobet said.

Beginning in the 1980s, A-B has used genetic fingerprinting for testing to ensure there aren’t any genetic shifts in the yeast. Keeping the yeast frozen ensures no natural genetic shifting occurs.

On a recent afternoon, Bowen donned padded gloves, a protective apron and a face mask to protect herself from the liquid nitrogen as she pulled a sleeve of frozen yeast out of the cryogenic tank. Puffs of white smoke filled the air as she took the yeast out of storage.

Above Bowen, a wall of cabinets is filled with glass flasks that look like high school science beakers. On another wall, a world map is dotted with dozens of push pins showing where the yeast that originates in St. Louis is shipped, including 45 breweries worldwide that make Budweiser.

Once it’s taken out of frozen storage, 1 milliliter of the yeast is pitched into wort, or unfermented beer, to begin the fermentation process. The mixture is gradually scaled up to larger containers until it reaches one of the yeast center’s four 2,000-barrel fermentors to propagate. About 1,000 barrels of yeast are made each week. The process hasn’t changed since A-B opened the yeast center 37 years ago.

On Mondays, the yeast is packaged in kegs that are kept cold with gel packs. About 30 half-barrel kegs of yeast are shipped each week, bound for breweries in Spain, Italy, Ireland, Argentina and other locales. Each keg, enclosed in a white shipping container, is coded with red tape to ensure the package isn’t opened during delivery. An additional 50 barrels of yeast are used at the St. Louis brewery each week.

Budweiser, A-B’s flagship beer, is growing internationally, making the yeast center in St. Louis increasingly important. In 2012, more than half — 51 percent — of Budweiser volume was sold outside of the U.S. for the first time. Global Budweiser sales grew 6.4 percent last year.

“Any Budweiser you taste, it started here,” Bowen said.

CEO says of the 2008 InBev purchase of A-B: 'We’re very happy with the results.'

Brewer hopes to replicate its success with Chicago's Goose Island.

A-B already was an official beer sponsor at Wrigley, but it didn't have exclusivity.

Students will work on projects in analytics, innovation and data research.

Coors declined to participate in the ad industry's self-regulatory review, prompting a referral of the challenge to the FTC.

Biergarten will feature a special beer-tasting each day at 3 p.m.

Brewer plans to continue with "liquid innovation" and pricier brews.

St. Louis has its very own Fort Knox in the heart of the sprawling Anheuser-Busch brewery complex south of downtown. What's guarded inside isn…

Strains of yeast that are being cryogenically frozen at Anheuser-Busch's Culture Yeast Center, on Thursday, Sept. 12, 2013 at Anheuser-Busch in St. Louis. Photo by Stephanie S. Cordle, scordle@post-dispatch.com