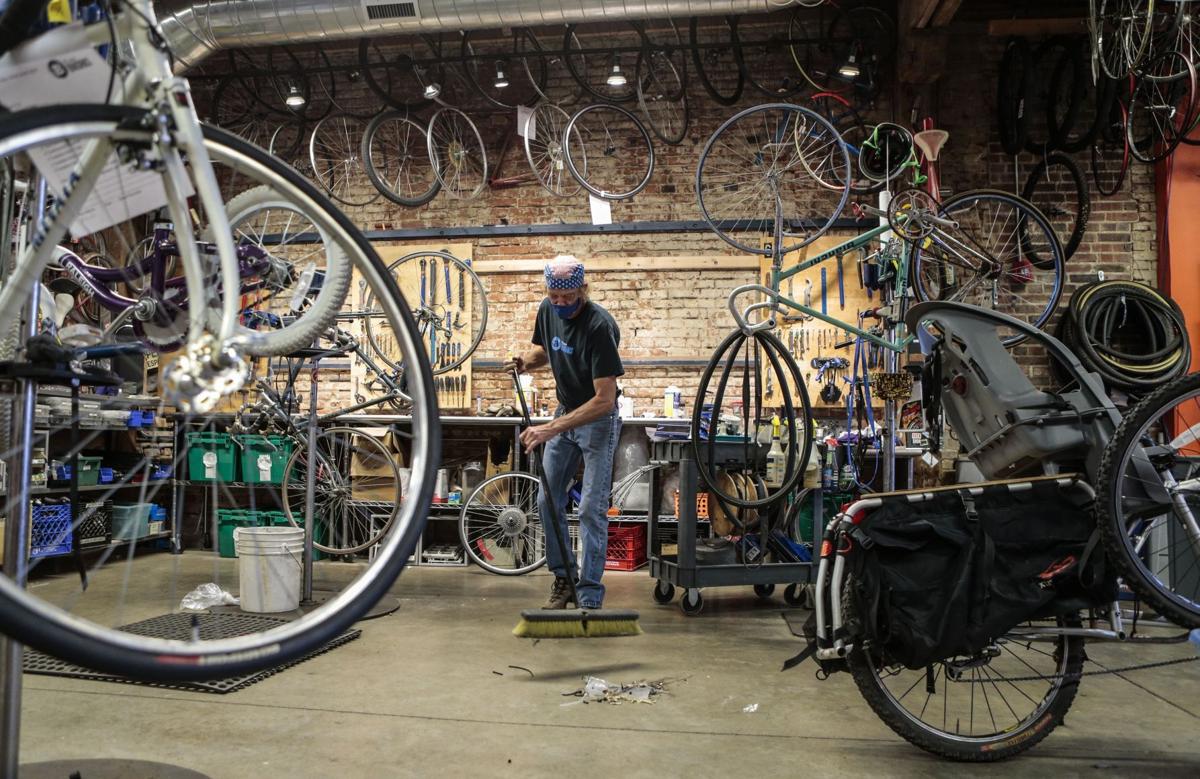 BWorks employee Paul Aiken sweeps the floor at St. Louis BWorks in Soulard on Wednesday, Oct. 7, 2020. Aiken has been an employee for four years and working with bikes for over 45 years. He is also a golden spike holder and one of the original founders of the Katy Trail bike path. Photo by Cheyenne Boone, cboone@post-dispatch.com 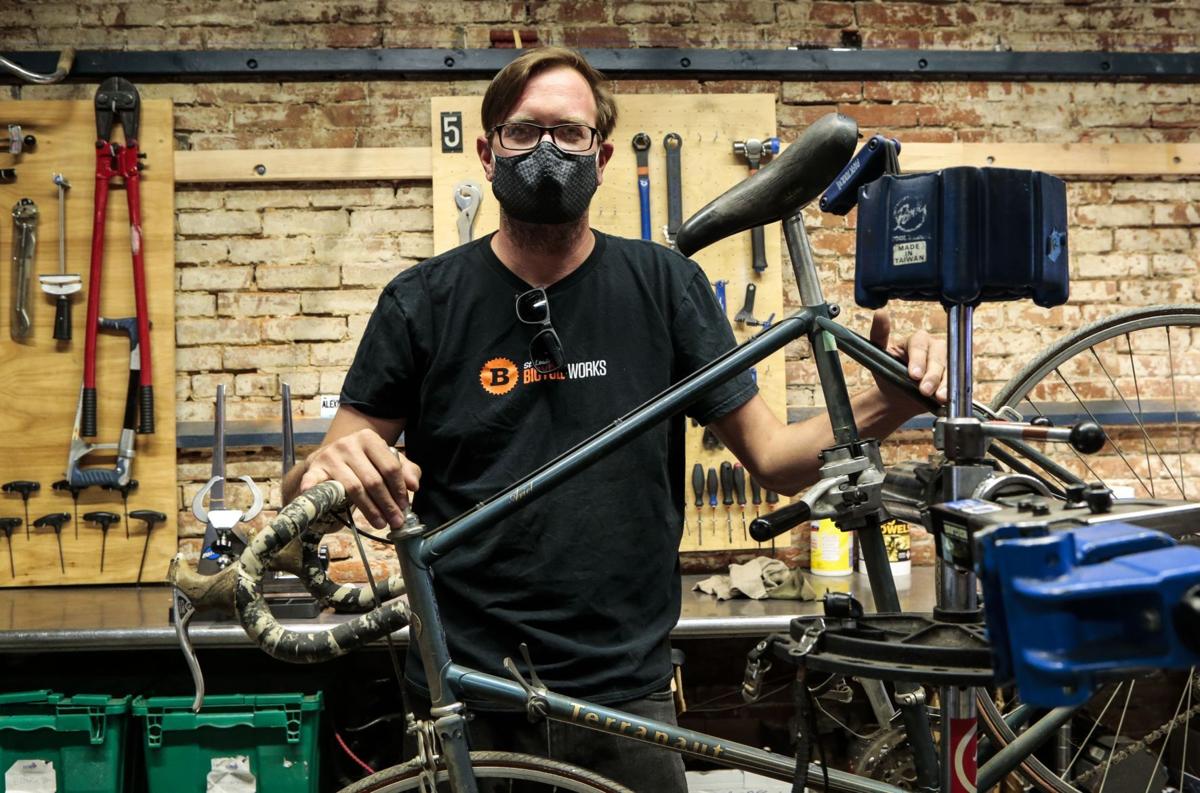 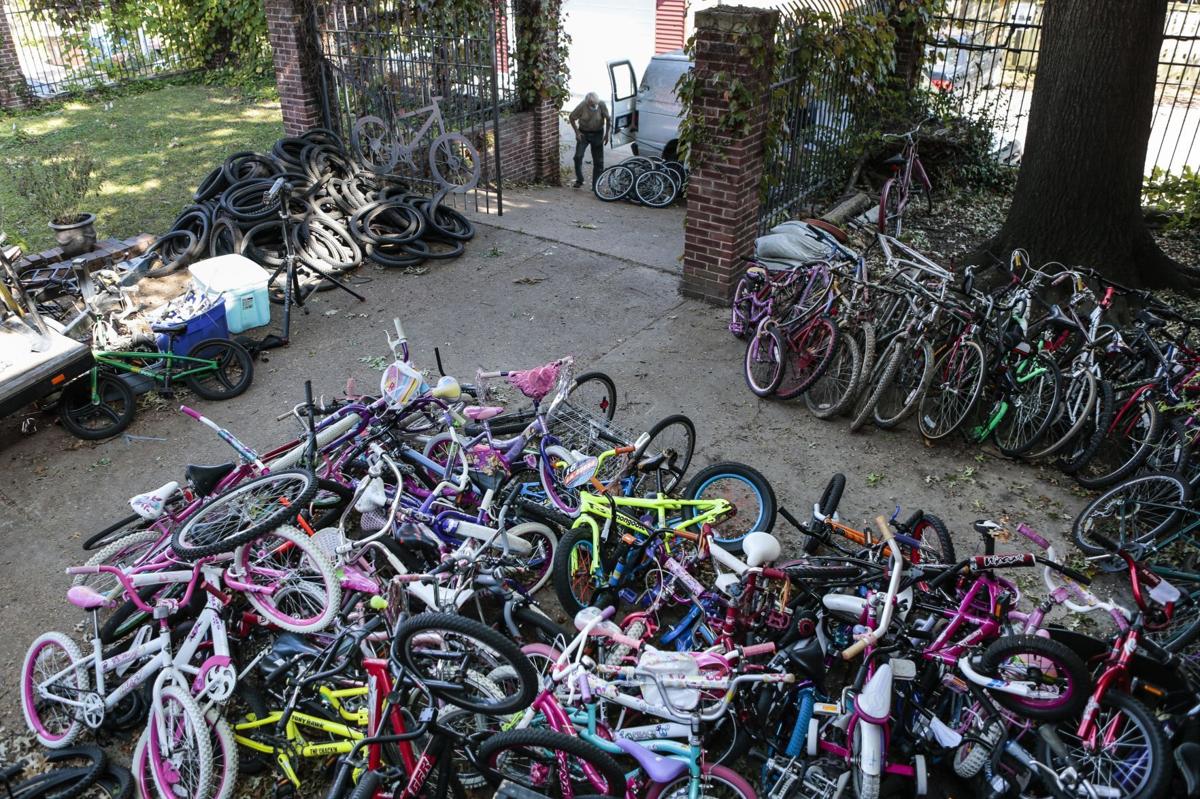 Old bicycles are piled outside to later be sorted through and recycled at St. Louis BWorks in Soulard on Wednesday, Oct. 7, 2020. Photo by Cheyenne Boone, cboone@post-dispatch.com 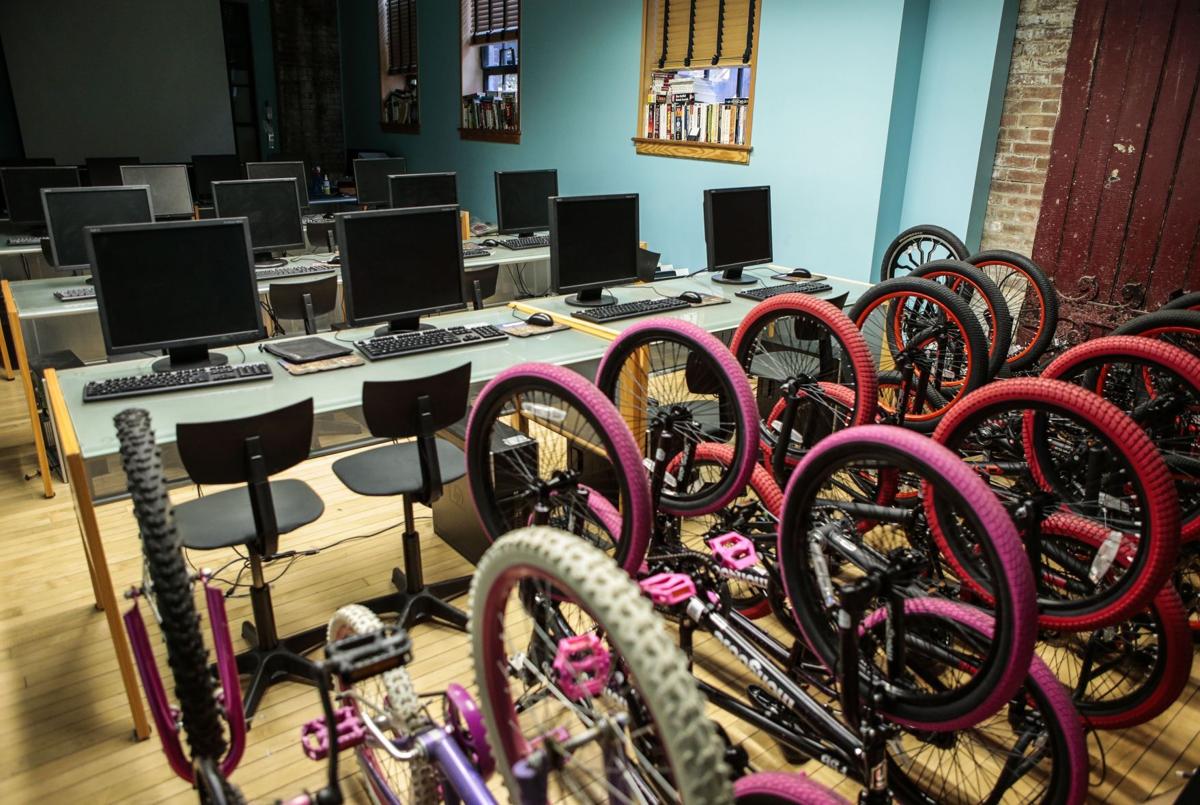 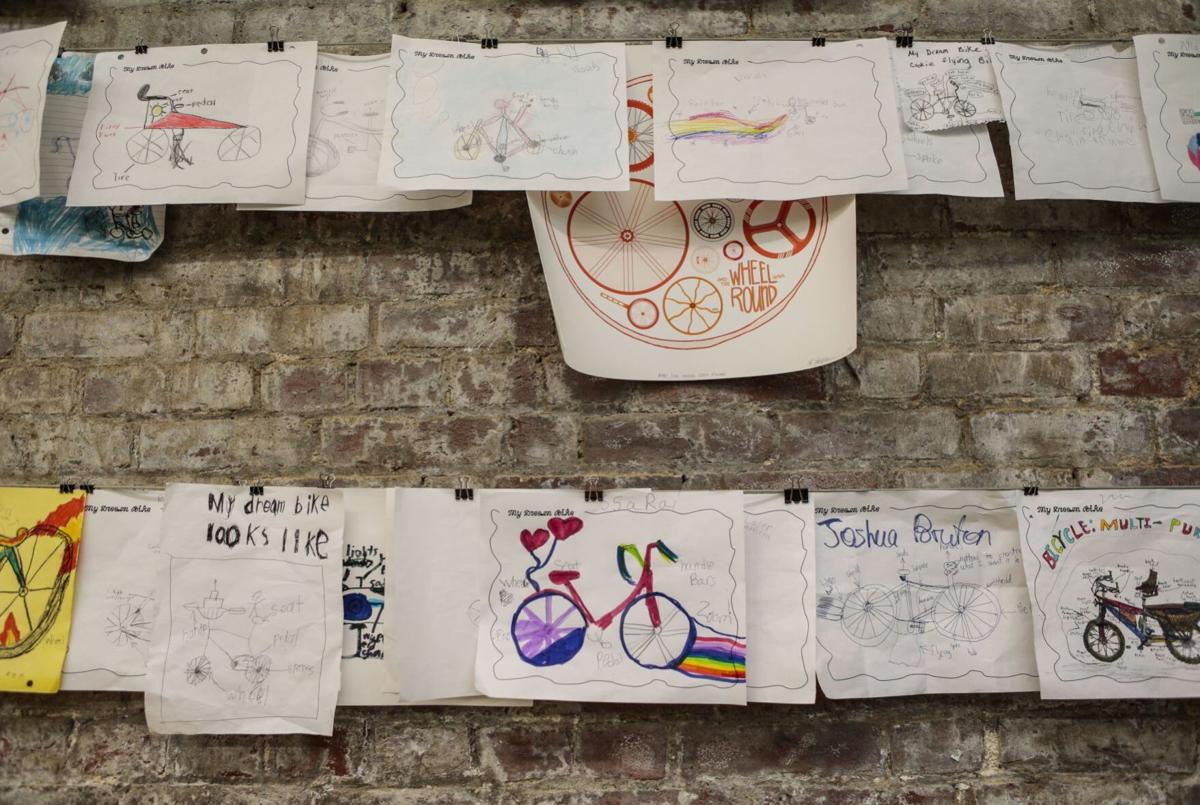 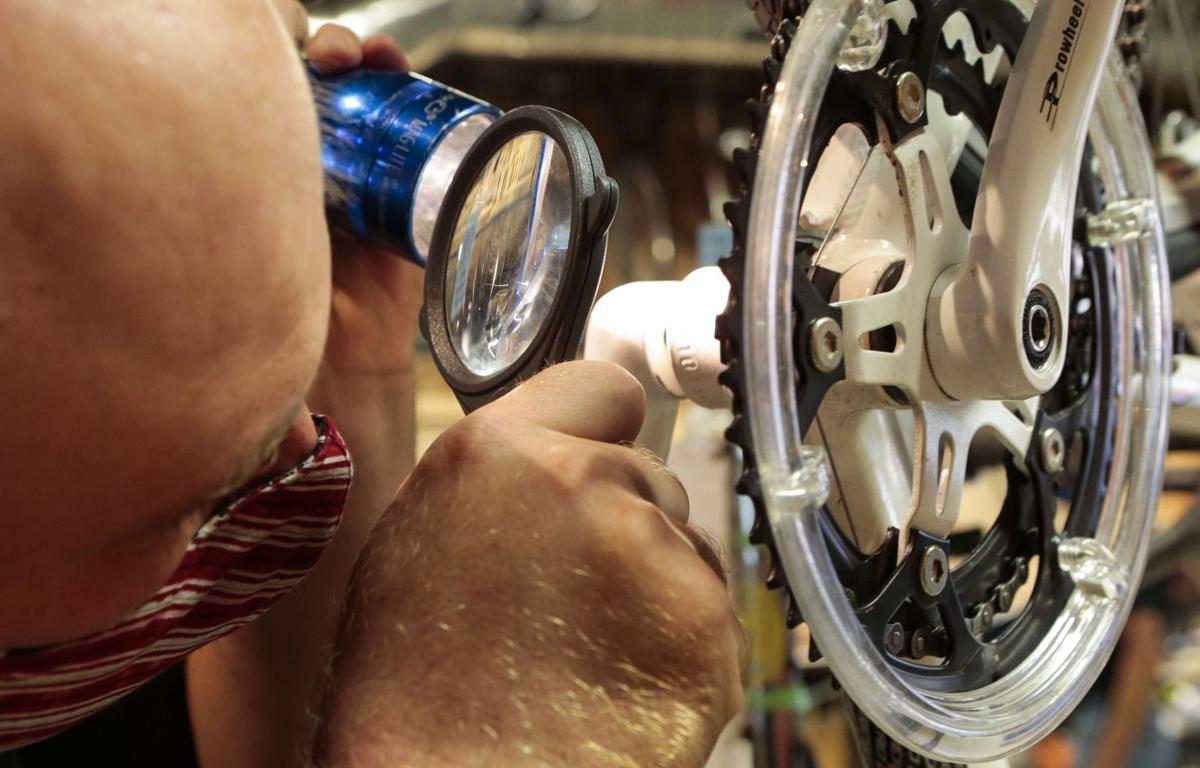 ST. LOUIS — Years ago, the Alpine Shop designated a spot at its Kirkwood store for customers to drop off bikes for donation. Every child should have a bicycle, said store co-owner Lisa Hollenbeck. It’s a taste of freedom with a side of responsibility, served up in the outdoors.

Hollenbeck has been collecting used bikes ever since, and sending them to St. Louis BWorks, a Soulard nonprofit that gets them into the hands of kids.

So when Hollenbeck heard about the collapse of a building Aug. 23 in the Lemp Brewery Complex, one that was storing hundreds of BWorks bikes, she was devastated.

“I thought, ‘What are they going to do?’” she said. “I was already worried about them because of the pandemic.”

Nonprofits across the region have struggled this year to land donations, engage volunteers and serve clients. But 2020 has hit BWorks from all sides. Its literacy program, Create-A-Book, has been suspended since March. It’s free computer and bicycle classes, in which students learn to dismantle the machines, have moved to Zoom, an extra challenge for lessons rooted in tinkering, testing and teamwork.

The BWorks retail shop, which sells refurbished bicycles and accessories to support its programming, migrated online. A spike in demand for bikes during the pandemic flattened donations: More people held onto their bikes as cabin fever renewed their interest in riding, or they sold them while prices were inflated. Gifts of computers, which often come from corporations, also fell off as office extras were sent home with workers.

Then, early on a Sunday in August, he got a call from a volunteer who lives near the Lemp facility at Cherokee and 18th streets. The six-story brick building, where BWorks had been keeping spare bikes for the past three years, had partially collapsed. No one was inside at the time.

Initially, he estimated that 700 bikes were in storage, enough to keep BWorks humming all winter. Now, he thinks the total might be more than 800, about half a year’s worth of donations. Van Der Tuin isn’t sure yet how many might be salvageable; he is concerned about possible contaminants among the debris and wants an all-clear before any BWorks employee works on those bikes.

Shashi Palamand, who owns the complex under Historic Lemp Brewery LLC, said on the day of the collapse that spring storms might have been a contributing factor. Van Der Tuin said he did not know there were problems, nor was he aware that the building had been condemned in 2013. Palamand did not respond to messages left at his business.

The tactile nature of bikes

In a typical year, 300 soon-to-be bike owners enroll in Earn-A-Bike. Some attend at the BWorks retail shop, in a refurbished carriage house on Menard Street in Soulard. Others sign up through dozens of partners, such as schools, churches or community centers. After six lessons on maintenance and safety, youngsters get to choose a bicycle. The free program is open to any child age 7 to 17.

Evie Hemphill of Holly Hills first heard about BWorks not long after she moved to St. Louis in 2010. She soon started volunteering as a teacher.

“There’s something about kids earning a bike on their own through work they did in six solid weeks that makes them treasure it more than they would otherwise,” said Hemphill, who often bikes to work at her job at St. Louis Public Radio.

In week one, pairs of children get a “puzzle bike” and are directed to take it apart. Their prize for dismantling the toddler-sized bicycles? Putting them back together again.

“For some kids, this is the first time they’ve used tools,” said Hemphill. “They realize this isn’t typical school.”

But sitting elbow to elbow, sharing pliers and Allen wrenches, and whispering to each other about wheel alignment is not a possibility now.

When BWorks resumed its bike classes in June via Zoom, they shaved off an hour each week to help hold attention. Kids play an online game to identify the parts of the bike; they draw a picture of their dream bike and hold it up to the camera.

“They’re excited, still, that they’re going to earn a bike,” said Hemphill. “But some of the magic of BWorks is the tactile nature of bikes and computers and books.”

Eight-year-old Greyson Crompton had been looking forward to earning his own bike since his older brother, Rand, went through the program two years ago. On graduation day, Rand and his classmates went on a ride together, celebrating their new wheels.

“He still loves his bike,” said Carrie Crompton of Lafayette Square. “He picked it out himself. He really grew into it.”

Crompton signed up Greyson for BWorks’ biking and computer classes this fall. It’s not the same environment, and there aren’t as many kids enrolled, she said, but Greyson is enjoying himself. And she hopes, in a few more years, youngest brother Ford will also be a BWorks graduate.

“It’s a little bit of a sleeper organization,” Crompton said. “We always try to promote them with our friends.”

BWorks started as St. Louis Bicycle Works in 1988. Its Earn-A-Computer program, Byte Works, was added in 1996. Book Works, in which kids write and illustrate their own books, started in 2011.

Until 2012, there was just one employee on the payroll; now there are nine. More than a hundred volunteers teach classes and restore donated bikes, which are sold or cannibalized, used as Earn-A-Bike incentives or donated to local or overseas children’s charities during the holidays.

Every year, BWorks gives out about a thousand bikes and 300 computers. Supply chain disruptions from the pandemic have made it harder to secure bike parts and computer components. Monitors, in particular, are needed.

If there’s one bright spot in the past year, executive director Van Der Tuin said, it’s that students have become more computer-savvy.

“Some of the kids are getting really good at presentations,” he said of the students’ Zoom demonstrations during class.

Since the collapse, bike shops and biking enthusiasts have rallied around BWorks. In September, they received 250 bikes. They’ve had offers of free or low-cost storage space — once they’ve reaccumulated enough stock to need it.

Van Der Tuin is hopeful that the number of bikes given away this Christmas won’t be affected, and before long, little hands will be in the shop, changing flat tires, adjusting chains and saddling up for a triumphant commencement ride through the streets of Soulard.

BWorks, known for its biking programs, leans on its computer classes as it awaits the fate of 800 bicycles buried in dust.

BWorks employee Paul Aiken sweeps the floor at St. Louis BWorks in Soulard on Wednesday, Oct. 7, 2020. Aiken has been an employee for four years and working with bikes for over 45 years. He is also a golden spike holder and one of the original founders of the Katy Trail bike path. Photo by Cheyenne Boone, cboone@post-dispatch.com

Old bicycles are piled outside to later be sorted through and recycled at St. Louis BWorks in Soulard on Wednesday, Oct. 7, 2020. Photo by Cheyenne Boone, cboone@post-dispatch.com