Throughout the past year, and without much fanfare, Amazon.com Inc. has gained approval to become a wholesale distributor from a number of state pharmaceutical boards, according to a review of public records.

It’s unclear, though, whether the regulatory filings support speculation that the e-commerce giant is planning a move into the prescription drug delivery business, territory currently dominated by a handful of companies.

Industry analysts in recent weeks have raised the possibility that Amazon was eyeing this lucrative new business, posing a potential threat to such companies as north St. Louis County-based Express Scripts Holding Co.

According to a review of records by the St. Louis Post-Dispatch, Amazon has received approval for wholesale pharmacy licenses in at least 12 states, including Nevada, Arizona, North Dakota, Louisiana, Alabama, New Jersey, Michigan, Connecticut, Idaho, New Hampshire, Oregon and Tennessee.

An application is currently pending in the state of Maine.

An Amazon spokesperson told the Post-Dispatch via email that the company does not comment on “rumors and speculation.”

The Post-Dispatch was alerted to the licenses by a drug supply chain researcher, Nicodemo Fiorentino, a New Jersey attorney who works for a health care consulting firm that provides regulatory and compliance advice to the pharmaceutical industry.

Ana Gupte, an analyst for Boston-based Leerink Partners, said in an email that Amazon obtaining wholesale pharmacy licenses “strengthens our conviction on the likely entry into the drug supply chain. It is still not clear if (Amazon) will pursue a buy or partner with an existing (pharmacy benefit manager) or build such capabilities from within.”

Fiorentino said this does not mean Amazon can begin shipping prescription drugs or devices directly to consumers; they would still need to obtain a pharmacy license.

In many cases, the licenses are tied to three Amazon facilities in the suburbs of Indianapolis. The addresses on the wholesale applications match the addresses of existing Indiana-based Amazon fulfillment centers.

“Just seeing the license itself, obviously it tells you some information but it doesn’t tell you the whole story,” Fiorentino told the Post-Dispatch.

The North Dakota license suggests that Amazon could also distribute medical devices or medical gas, according to the license issued Feb. 24.

The application in Nevada, which was issued Jan. 25, is a little more detailed.

On the applications where it describes the types of products that will be handled by the wholesale firm, it lists “legend pharmaceuticals, supplies, or devices and hypodermic devices.”

The Food and Drug Administration decides whether a medication is over-the-counter or a legend pharmaceutical, which requires a prescription, according to Larry Pinson, executive secretary for the Nevada State Board of Pharmacy.

A box that is left unchecked on the Nevada application is the ability to handle controlled substances.

The license in Nevada allows Amazon to ship into the state from the three facilities in Indiana, Pinson said.

On two of the three applications submitted in Nevada, the facility manager is listed as Casey Burnette, who lists the following qualifications and experience: “senior production supervisor for Boston Scientific Corporation, direct involvement in the design and manufacturer of medical devices used in a range of interventional medical specialties including endoscopy, urology and gynecology,” according to the application.

In the licenses for Tennessee, Ryan Bingham is listed.

Bingham, according to his LinkedIn profile, is a senior operations leader for Amazon in the Indianapolis area. Prior to joining Amazon in September of last year, he served as director of operations for Express Scripts in Indianapolis.

Some analysts see the e-commerce giant preparing to make a move; others aren't so sure.

The industry braces for potential competition from the e-commerce giant.

Wentworth says he'd be open to a deal if a major insurer were interested. 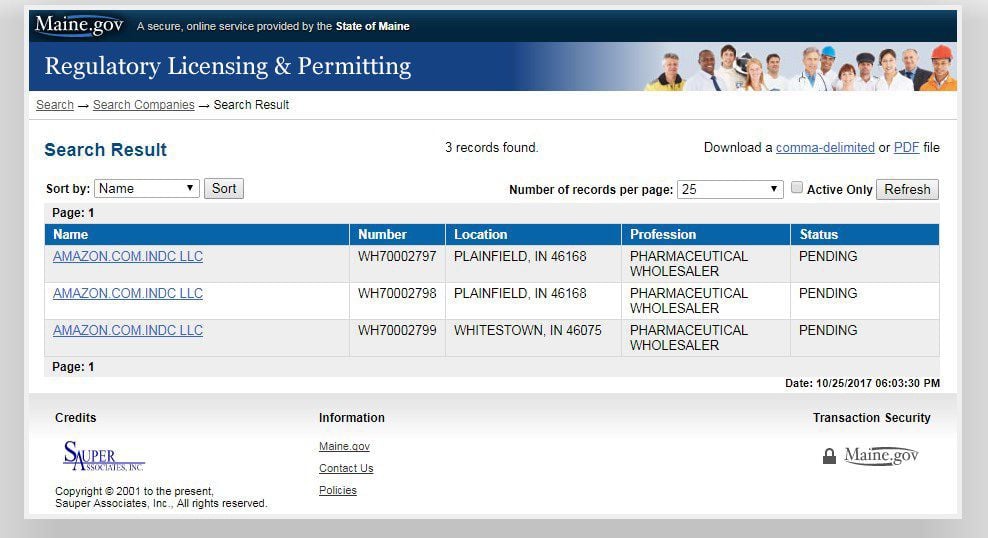 Throughout the past year, and without much fanfare, Amazon has gained approval from state pharmaceutical boards to become a wholesale distributor. Their applications in Maine are pending. 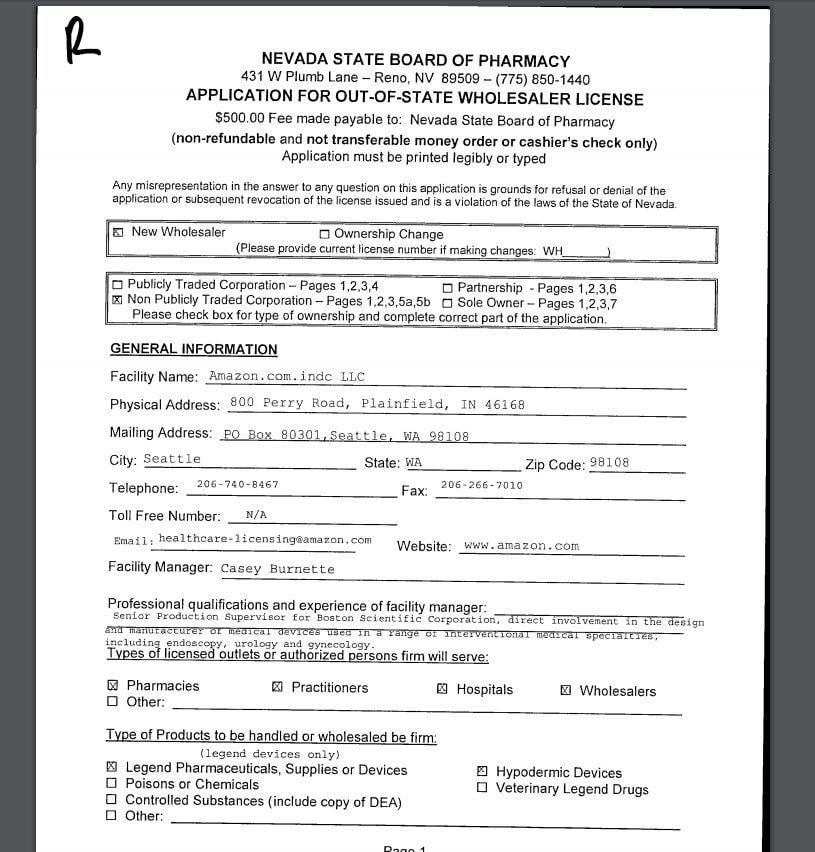 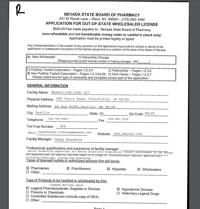 The Nevada State Board of Pharmacy approved an out-of-state wholesale licenses to Amazon.