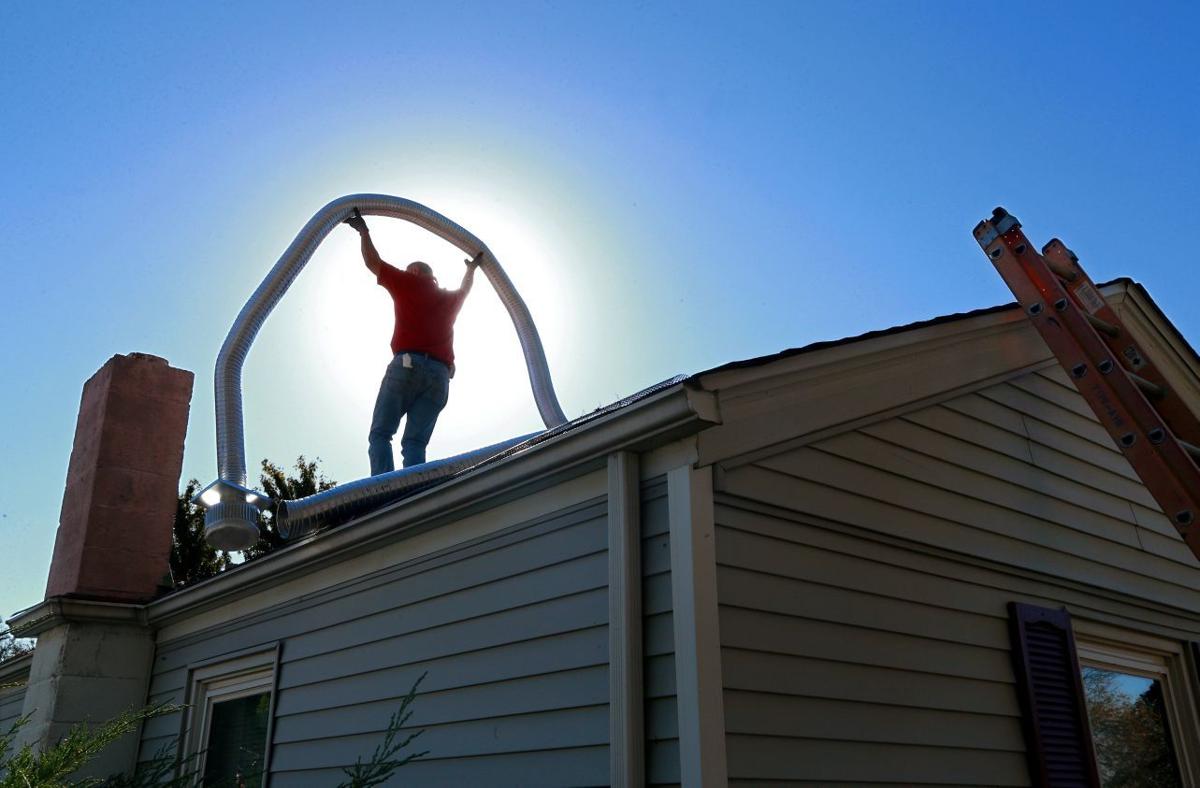 Mark Wahle, a technician with Zipf-Air, Inc., prepares to drop a new vent liner down the chimney of a Dogtown home on Monday Oct. 20, 2014, for a total furnace and air conditioning replacement. The narrower vent is necessary on the new unit to qualify for a rebate from Ameren. Now the efficiency program may not be renewed. Photo by Christian Gooden, cgooden@post-dispatch.com 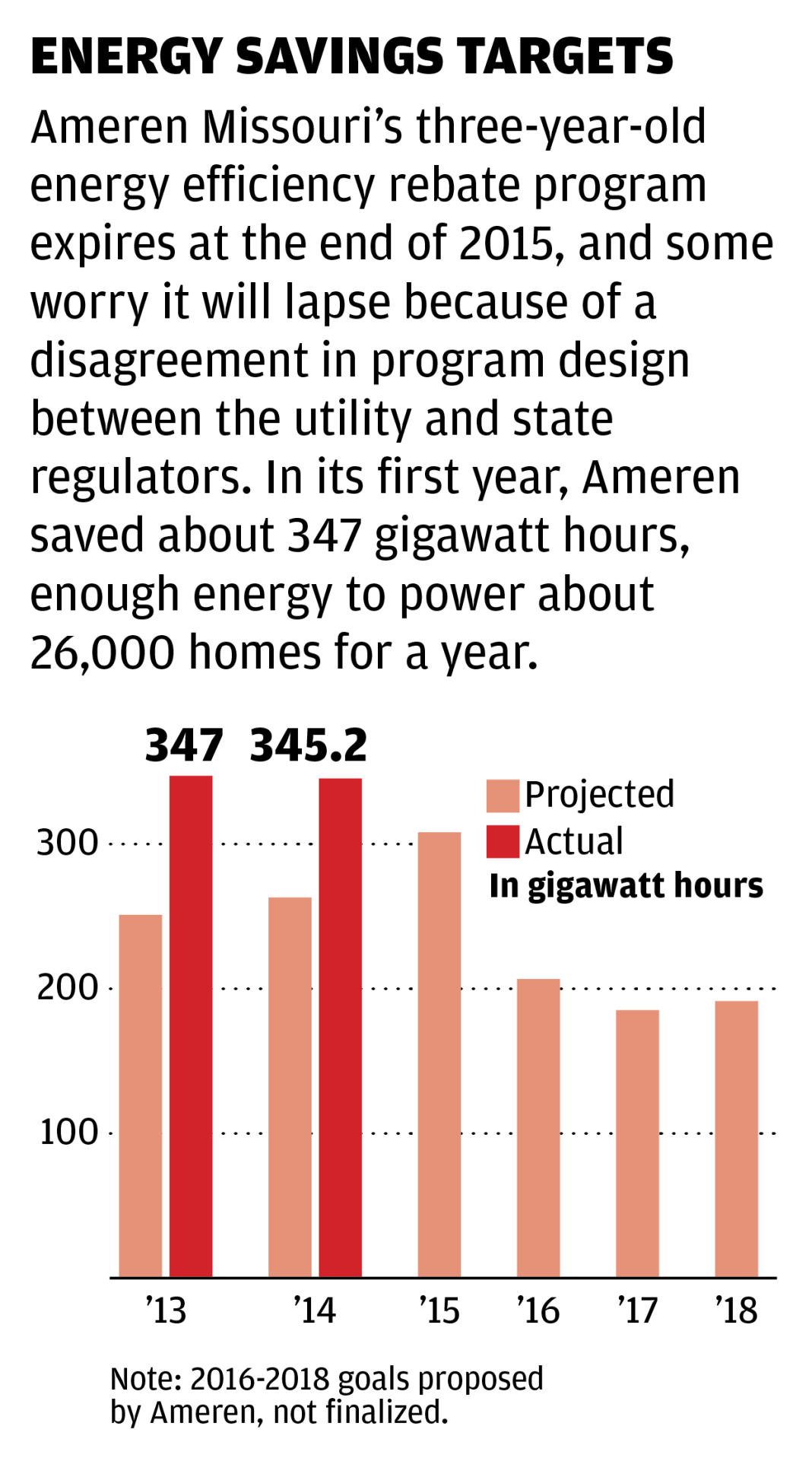 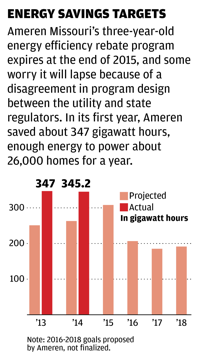 Energy efficiency rebates under an Ameren Missouri program could expire at the end of the year after state regulators rejected the utility’s electricity saving plan.

The Missouri Public Service Commission unanimously voted Thursday against an Ameren plan that would have extended for another three years a program that has put more than $100 million toward energy efficiency and saved some 1 million megawatt hours of power.

The popular program provides rebates to customers who buy efficient appliances, such as refrigerators and air conditioners, and subsidizes the price of efficient light bulbs at participating retailers.

“In order to approve a plan of this size, it is absolutely critical we have accurate (measurements) so that we can know with some degree of certainty what amount of savings, energy savings, are on the table,” PSC Chairman Daniel Hall said Thursday. “Without that type of (measurement), I’m just uncomfortable approving that type of plan.”

Under state law, Ameren does not have to offer an efficiency program, and the utility wouldn’t say whether it will try to renegotiate a program structure or just let the rebates end.

Ameren said in a statement only that it was “disappointed” with the PSC’s decision and was reviewing the order to “determine next steps.”

“The proposal we submitted is mutually beneficial to all stakeholders, including our customers, who rely on our energy efficiency programs to better manage their energy usage and costs,” Ameren Missouri President Michael Moehn said in a statement.

Programs like the one offered by Ameren Missouri exist around the country as states look to cut energy use, which experts say is generally cheaper than building new power plants.

The programs are paid for through a separate charge on customer bills, which currently averages about $6 per month for households. Ameren collects the charges to cover lost sales and pay for rebates. It can also qualify for an incentive payment if it hits savings goals.

But the utility has sparred for several months with the Missouri Office of Public Counsel, which represents ratepayers, and the PSC’s staff over how to design the second round of its efficiency program. Despite Ameren’s success in hitting energy savings targets during the first three years, the public counsel and PSC wanted better auditing procedures to make sure it doesn’t overcharge customers for the program.

Ameren argued that subjecting the revenue it collects from the efficiency charge to after-the-fact auditing and revision would run afoul of accounting rules.

Public Counsel Dustin Allison said his office disputes that, but he said PSC and public counsel staff have tried to work with Ameren to come up with a solution that addresses its accounting concerns while still making sure customers aren’t overcharged.

The commission agreed with public counsel that it is “better to have no program than that program,” Allison said of Ameren’s plan.

Hall said he was convinced during the case that Ameren recovered money “in excess” of what was needed to offset lost sales. He added that the commission must make sure Ameren’s efficiency program benefits all ratepayers by cutting the need for new power generation. Otherwise, only those who receive rebates benefit, while others pay for both efficiency and new power.

“I really hope the company comes back with another proposal to address some of these shortcomings,” Hall said.

A decision to extend the program had already been put off for weeks to allow more time for Ameren to negotiate with public counsel and the PSC staff. Ameren already upped its energy savings targets and won an ally in the Natural Resources Defense Council, which hoped to fix program design issues later while keeping the efficiency program from lapsing.

“It appears to me that no (efficiency) program will have a negative impact on Ameren’s shareholders and therefore Ameren should work to some sort of compromise on those issues,” PSC Commissioner Bill Kenney said in early September, when the PSC gave Ameren and other groups more time to work out their differences.

But the two sides couldn’t reach an agreement. The public counsel and PSC staff said Ameren’s latest plan did not resolve their concerns about auditing energy savings and costs.

Asked whether the vote derails negotiations, Allison said: “I think it’s entirely up to Ameren at this point. From our standpoint, it does not.”

Meanwhile, companies that incorporated the programs into their business plans are facing uncertainty.

“Without the Ameren incentive, we maybe would have done 10,” he said.

Losing the Ameren incentives will make LED systems a “tough sale” because of the extra time it will take customers to recover their investment, Frisella said. The rebates have helped Metro Lighting build a strong efficiency business over the last few years, he said.

“This is a new revenue stream and it allowed us to help companies be more environmentally conscious,” Frisella said. “It’s not only hurting us financially, but it’s also going to hurt the state as far as being more energy efficient and using less electricity.”

Editorial: For better energy efficiency, not just a carrot, but a stick

Ameren and its regulators should find a way to preserve energy efficiency program.

Disagreement with regulators ends energy saving program, but Kansas City Power and Light agreement could serve as model for resolution

Future of energy-saving rebates in the region at risk in dispute over program design.

Ameren spars with critics over future of efficiency program

Energy efficiency rebates could be at risk in St. Louis area

Ameren has unlikely ally in fight over future of efficiency program

After good results in first year, environmentalists say far more can be done to reduce energy use.

Mark Wahle, a technician with Zipf-Air, Inc., prepares to drop a new vent liner down the chimney of a Dogtown home on Monday Oct. 20, 2014, for a total furnace and air conditioning replacement. The narrower vent is necessary on the new unit to qualify for a rebate from Ameren. Now the efficiency program may not be renewed. Photo by Christian Gooden, cgooden@post-dispatch.com