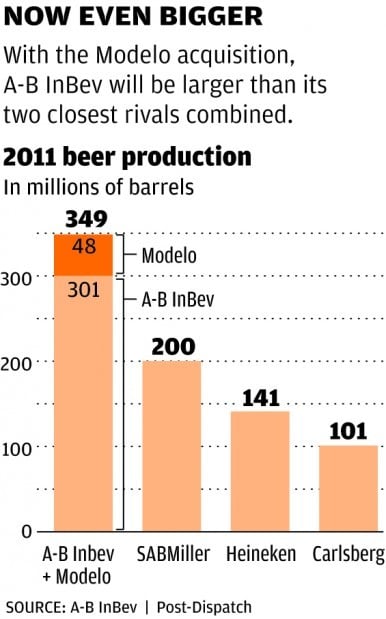 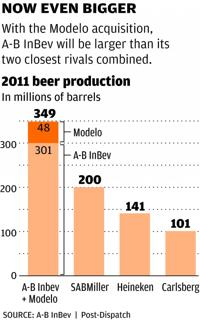 Mexico's largest brewer Grupo Modelo, which Anheuser-Busch Cos. once eyed as a possible savior in its failed attempt to thwart InBev's takeover, is being acquired by that same Belgian company for $20.1 billion.

And A-B InBev, already the world's largest brewer, gets even bigger. Once the deal closes, the company will be larger than its two largest competitors, SABMiller and Heineken, combined.

The Belgian brewer currently owns a 50 percent stake in Modelo that it acquired when the Belgian company took over Anheuser-Busch in 2008. Under the deal, it will buy the remaining stake at a purchase price of $9.15 per Modelo share.

Corona already is a global brand, holding the number one import ranking in 38 countries.

Yet Corona can grow even faster under its new owner, according to A-B InBev CEO Carlos Brito.

A-B InBev plans to pursue the same aggressive growth strategy for Corona as it has with Budweiser. Bud's sales volume outside the U.S. has grown 45 percent since 2009.

"We want to keep that (Corona's sales) momentum going,” Brito said during a Friday conference call with analysts. “We see a big opportunity to expand the Corona brand on a global basis as we did with global Budweiser the last three years.”

Using A-B InBev's marketing and distribution channels, Corona will increase its market share in growing Latin American countries and beyond, said Bill Finnie, a former A-B executive and an adjunct professor of strategy at the Olin Business School at Washington University in St. Louis.

“There's a drinkability to Corona that is very consistent with the movement to lighter tasting beers in the U.S. and internationally,” Finnie said. “Corona could eventually be the dominant InBev brand in Central and South America and possibly, internationally.”

A-B InBev said it expects the combination to yield annual cost-savings of at least $600 million through combined purchasing opportunities, sharing best practices and efficiencies in overhead and systems costs.

“We have long been impressed with (A-B InBev) management's ability to acquire and integrate beer brands into its portfolio, generate synergies from merging best practices, and cut costs to the bone to drive margin growth,” Morningstar analyst Dave Sekera wrote Friday in a note. “We expect this time will be no different.”

Under the terms of the deal, the Mexican brewer will take a series of steps to “simplify Grupo Modelo’s corporate structure,” then A-B InBev will tender an all-cash offer for the remaining shares. Modelo has interlocking subsidiaries that were created to keep control in the hands of the Mexican families that own the brewer.

The deal is expected to close in the first quarter of 2013, pending regulatory approvals in the U.S. and other countries.

Unlike InBev’s takeover of Anheuser-Busch, this deal will allow Modelo to maintain the trappings of independence. Modelo’s headquarters will remain in Mexico City and the Mexican company will maintain a local board of directors.

It also was unclear how Modelo would fit into the structure of A-B InBev's North American operations, which is based in St. Louis. The brewer didn't respond to questions on this matter.

One thing is familiar. The top person will leave. The Modelo CEO told Bloomberg News later Friday that he would be stepping down as head of the Mexican brewer after the deal is completed.

Still, Fernandez will have a seat on the local board of the acquired company, along with Grupo Modelo board members María Asunción Aramburuzabala and Valentín Díez Morodo.

Under the deal, two Modelo board members will join its board after investing $1.5 billion from the proceeds of the tender offer back into A-B InBev shares.

Though the prospective board members were unnamed in the press release, Bloomberg reported that Aramburuzabala and Díez Morodo would be appointed to the A-B InBev’s board.

To quell anti-trust concerns, Grupo Modelo will sell its 50 percent stake in Chicago-based Crown Imports, the joint venture that exports and markets its Corona brands in the U.S., to partner Constellation Brands, which is based in Victor, N.Y., for $1.85 billion.

By giving up control of Corona's distribution in the U.S., Modelo hopes the Crown divestiture will head off any antitrust concerns about the A-B InBev acquisition.

Some analysts had speculated A-B InBev might have to shed some brands to ease regulators' concerns, but Brito said no divestitures are planned.

An A-B InBev/Modelo combination would give the brewer a market share of about 53 percent in the U.S., and antitrust regulators could block or impose conditions on the deal.

“I think by selling the 50 percent stake in Crown to Constellation, clearly, they wanted to err on the side of safety in getting the deal approved by antitrust regulators,” said Harry Schuhmacher, editor of Beer Business Daily, an industry newsletter based in San Antonio.

“We don't expect any changes in the way we do business,” Barrow said. “It should be business as usual.”

A-B InBev does have the right to exercise an option to acquire Crown every 10 years. But that provision may not survive regulators' scrutiny.

“That might be a bargaining chip they put in there to have something to give up” if regulators raise concerns, Schuhmacher said.

Friday's acquisition announcement ends a close, but tumultuous relationship between the two brewers. The partnership first started in 1993 when A-B bought a share of Modelo as part of a bid to expand in Mexico. By the late 1990s, A-B owned a 50 percent interest in the business, and controlled nine of 19 board seats, while Modelo CEO Carlos Fernandez sat on the St. Louis brewer's board.

When InBev launched its takeover bid in 2008, A-B executives saw buying the rest of Modelo as their best option to remain independent - the so-called “Mexican defense” - and the two companies were near a deal in which A-B would buy out Modelo and potentially install Fernandez as CEO, according to an account in Dethroning the King, a 2011 book on the InBev takeover.

But that deal fell through, and Fernandez quit the board of A-B shortly before the deal with InBev.

Since then, relations between Modelo and A-B InBev have been frosty.

In 2008, Modelo filed for arbitration against A-B selling its stake in the Mexican brewer to InBev; arbitrators ruled in A-B's favor. Meanwhile Modelo has snubbed A-B InBev's network for several overseas distribution deals, instead picking rivals MolsonCoors and Carlsberg.

As a company closely controlled by various Mexican families, it was unclear why the owners decided to yield to A-B InBev.

“It could just be the timing for some of their shareholders,” he said. “There is a sense of inevitability to it, in that you have an partner with extremely deep pockets.”

The brewery has the resources to improve a notoriously skunky beer.

Ripples from A-B/Modelo deal could extend far and wide

The bond issuance is expected to close on July 16.

More from A-B earnings: A better second half to come?

Brito talks of the power of Platinum, and Budweiser's global paradox

Mexican brewer is a tantalizing prize for A-B InBev

Giant brewer will have to finesse antitrust issues and smooth over past culture clashes.

Restaurant and beer garden to fill one of three anchor spots in $100 million first phase.

The debate has been simmering for about two years.