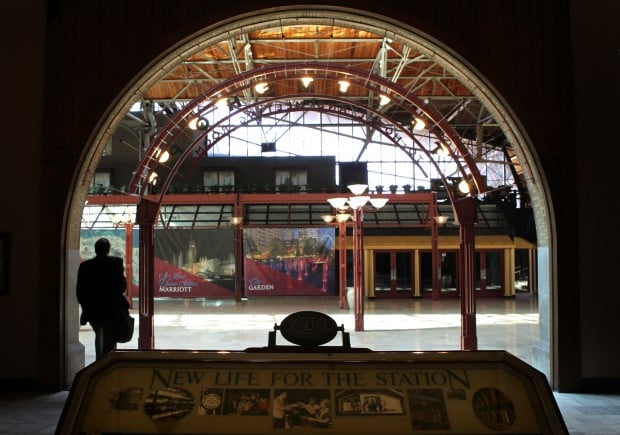 Signs inside Union Station on June 20, 2012, recall when the old train station was renovated into a shopping mall. Photo by Robert Cohen, rcohen@post-dispatch.com 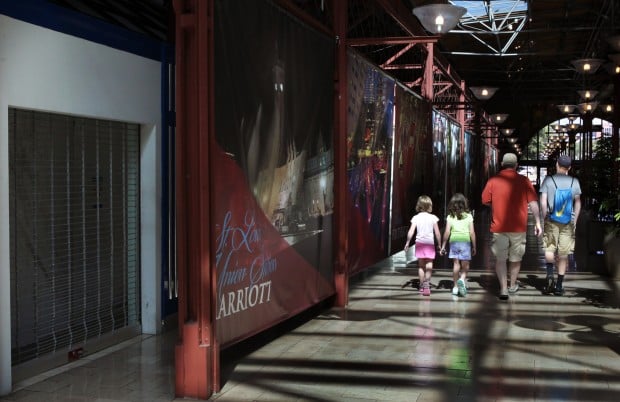 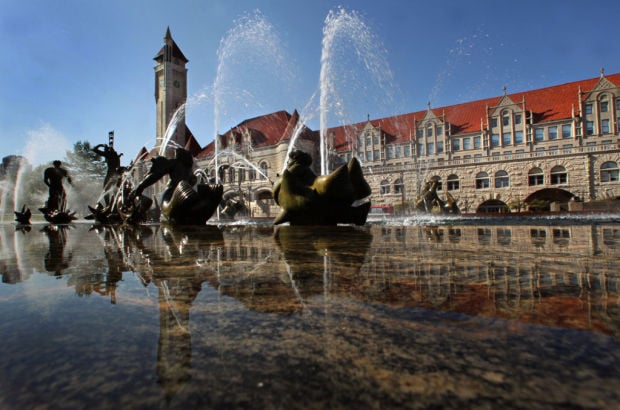 "The Meeting of the Waters," a sculpture by Carl Milles sits across Market Street from Union Station Wednesday June 20, 2012. Photo by Robert Cohen, rcohen@post-dispatch.com

ST. LOUIS • The $25 million makeover of Union Station is finally under way, a long-awaited effort that developers and city officials hope will breathe new life into this venerable, though ailing, landmark.

Work began this week at the historic St. Louis complex to expand meeting space, renovate hotel rooms and prepare for the return of excursion trains.

First on the to-do list is renovating the Midway — the area between the terminal building and the arched train shed — as 50,000 square feet of meeting space.

Included in LHM’s $25-million plan is a new bar in the Grand Hall, a gift shop and a Starbucks in alcoves off the hall and offices in much of the station’s long-struggling retail area.

The renovations to hotel rooms, expanded meeting-space construction and Grand Hall work will be completed in a year, said O’Loughlin, LHM’s chief executive.

“I think people are going to like it,” he said.

There is no date yet for the completion of the redone retail area.

Also in the works is the return of excursion trains, which last ran at Union Station about six years ago. Ed Boyce, who operated the trains previously, said he was working with O’Loughlin to bring back rail service “that make sense.”

Possible are private and public rail trips to Missouri wine country and other regional destinations. Boyce said an advantage of Union Station’s hotel was its direct access to train service. A convention of private railcar owners already is scheduled for next year at Union Station, O’Loughlin said.

Limited excursion service might resume this year, after the four rail sidings used previously are readied for renewed use. Excursion train trips for corporate meetings and special events are becoming popular, Boyce said.

“It’s the difference between a trip and an experience,” Boyce said.

LHM, which rebranded the station’s hotel as a Hilton DoubleTree, will renovate all 539 rooms. The hotel previously was a Marriott.

O’Loughlin said that the station’s food court would be “condensed” at the south end of the train shed and that much of the upper-level retail space in the building beneath the shed would eventually be converted to office space. Design firms would be ideal tenants, he said.

Union Station, a National Historic Landmark, became a national hub of rail passenger service after it opened in 1894. But the nationwide decline of rail service in the 1950s affected St. Louis, too. Amtrak left in 1978.

A $140 million renovation and restoration by the Rouse Co., of Baltimore, produced a grand reopening in 1985 under Rouse’s “festival market” model. Business was good for a few years, but without a strong anchor the station fell out of favor with St. Louis residents and tourists.

LHM bought the station from Union Station Holdings LLC, which put the station up for sale last fall after years of absorbing losses.

ST. LOUIS • The chairman of the St. Louis Convention and Visitors Commission has stepped down.

The historic landmark and fashion week enterprise capitalize on each other's cachet.

Editorial: Union Station. Once more, with feeling. And a Ferris wheel

Another reboot for Union Station.

Signs inside Union Station on June 20, 2012, recall when the old train station was renovated into a shopping mall. Photo by Robert Cohen, rcohen@post-dispatch.com

"The Meeting of the Waters," a sculpture by Carl Milles sits across Market Street from Union Station Wednesday June 20, 2012. Photo by Robert Cohen, rcohen@post-dispatch.com