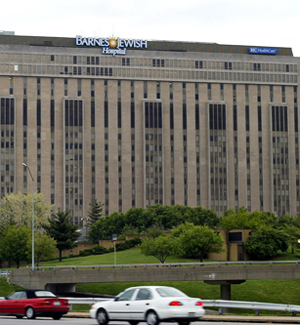 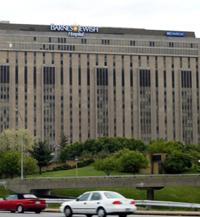 Barnes-Jewish Hospital in a file photo from May 2, 2005. Photo By David Carson, dcarson@post-dispatch.com 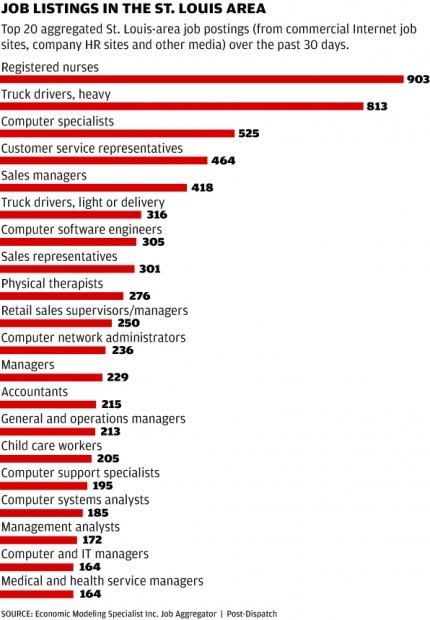 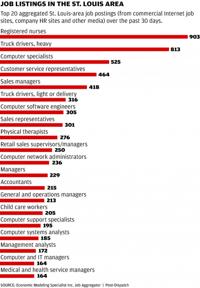 A year has passed since entrepreneur Kim Harris concluded that the security of a paid professional position with health benefits outweighed the autonomy of operating a mobile dog grooming business.

Counting on the graduate degrees she earned in social work and criminal justice, the East St. Louis resident waded into the job market confident of a return to the full-time workforce.

Harris, 45, now realizes she underestimated the depth of the employment crisis.

"Even my undergraduate degree in education hasn't helped," said Harris, who supplements her business income with a part-time job as an aide at a Metro East health care facility. "They're laying off teachers everywhere, too."

Officials who track St. Louis economic trends are unfortunately unable to offer much in the way of hope to job-seekers such as Harris, one of 132,345 area residents who are jobless and don't want to be.

Job creation, they say, has stalled on both sides of the Mississippi River, and the prognosis for early 2012 isn't much better.

Hiring "is stuck on hold nationally and will probably continue to drift down a little," said Howard Wall, director of the Institute for the Study of Economics and the Environment at Lindenwood University. "We're just along for the ride, and there's not much we can do about it."

Vicki Niederhofer, an economic analyst with the Illinois Department of Employment Security office in Belleville, has seen the jobless rate in her state again creep into double digits after a solid year of improvement.

The Metro East lost 2,700 jobs in the year since September 2010 as the unemployment rate remained unchanged at 9.1 percent during the 12-month stretch. (Chicago, by contrast, added 17,000 jobs in the same period.)

"The national headwinds are difficult to fight," Niederhofer said.

A Post-Dispatch survey of the region's 40 largest employers seems to bear out Niederhofer's belief that hiring won't rebound until recession-weary consumers loosen the purse strings.

Less than a third of companies, government agencies and nonprofit organizations said they were planning to expand their workforce by the end of the year.

In employment economics, the past often serves as prologue.

Given that, Niederhofer cites a 2010 baseline survey conducted by her agency to forecast the Metro East jobs with the "highest projected demand" through 2018.

Experts say there are 72 million reasons — the estimated number of baby boomers on a collision course with the infirmities of old age — that health care continually leads surveys of projected job growth.

Those 72 million have the potential to generate hundreds of jobs.

Of the top 50 St. Louis-area employment opportunities compiled by the Economic Modeling Specialist Inc. "Job Aggregator" over the past 30 days, 11 were directly connected to the health care industry.

An additional 14 of the job listings could conceivably lead to employees providing support services to the health care sector.

"There's the food service, the physical plant, a strong (information technology) system, entry- and mid-level patient jobs, science and research. It's all there. People just need to understand how to recreate themselves to be part of it."

Missouri took a step in that direction last month by accepting a $20 million federal grant to provide 4,600 unemployed workers with training for some of those careers.

Upon completion of the training, "flexibility is key" for applicants who hope to eventually earn a living in the health care sector, said Pat Tubbesing, the director of the Education Service Center for SSM Health Care. "You need to be adaptive, because we're in an ever-changing environment," Tubbesing said.

SSM, which is hiring, now ranks third in the region in terms of total employment, barely 300 jobs behind second-place Boeing. Wall attributes much of that growth to the absorption of small local hospitals by larger health care systems.

Even so, he says, the boom in health care hiring points to the direction of the regional economy in both the short and long term.

Despite a hiring stagnation that has mired area unemployment at 8.6 percent to 10 percent over the past year (the current rate stands at 8.9 percent), Nunn professes to be upbeat about the forecast heading into 2012.

"Positioning St. Louis as best in class as a freight hub for the world is the kind of thinking we need to position St. Louis as a winner," he said. "We need deals like that."

Or more deals such as the two unexpected announcements this year that could resurrect a local manufacturing sector. General Motors announced last month that it would hire 1,850 more workers when it adds a small truck line to its van assembly production plant in Wentzville.

And British-owned Emerald Automotive is moving forward with plans — not yet finalized — to manufacture an electric vehicle at a Hazelwood facility that could employ up to 580 people and perhaps 400 suppliers by 2015.

Wall cautions that while the GM and Emerald Automotive jobs may eventually make a dent in the local unemployment rate, the region has a long way to go before recapturing the 65,100 jobs lost since the start of the recession.

With the consumer confidence index in the tank and online shopping grabbing a bigger chunk of sales, Niederhofer says it is equally unrealistic to expect retail employers to step into the breach.

As they search for the opportunity to end prolonged stretches of unemployment the likes of which Americans haven't endured since the Great Depression, Niederhofer advises job-seekers to ultimately trust their instincts.

Even as career experts steer the unemployed toward high-growth sectors, she says, it's important that job-seekers keep in mind that positions in health care, advanced manufacturing and sustainable energy are not for everyone.

"You can look at all the projections you want," Niederhofer said. "But you have to begin with yourself. And to build a future career you have to recognize what interests you and what jobs in which you'll do well."

The top 40 largest employers in St. Louis employ a fifth of the work force here.

Search by rank, company name or type of business to learn the top employers in the St. Louis region.

The expansion will bring more than 1,200 jobs in addition to more than 400 new jobs planned for a second shift of existing van production.

Missouri, other states coming after the unemployed for alleged benefit fraud

WASHINGTON • Last week, President Barack Obama proclaimed the end of an eight-year war in Iraq in which more than 1 million Americans have ser…

Volunteer lawyers are working with the Madison County court system to create a new way for low-income residents to receive free legal services.

Barnes-Jewish Hospital in a file photo from May 2, 2005. Photo By David Carson, dcarson@post-dispatch.com