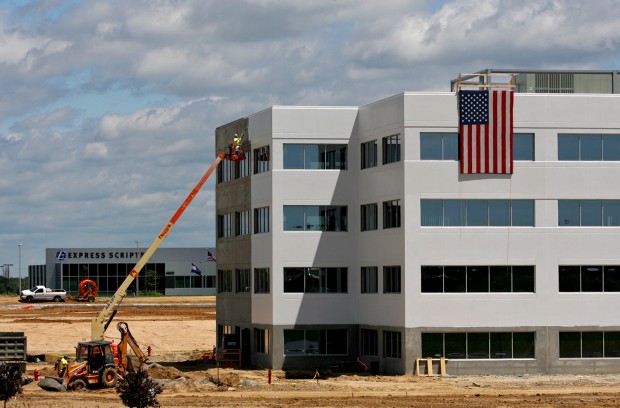 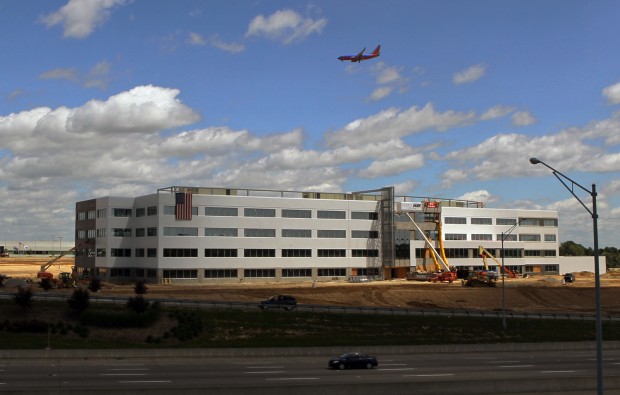 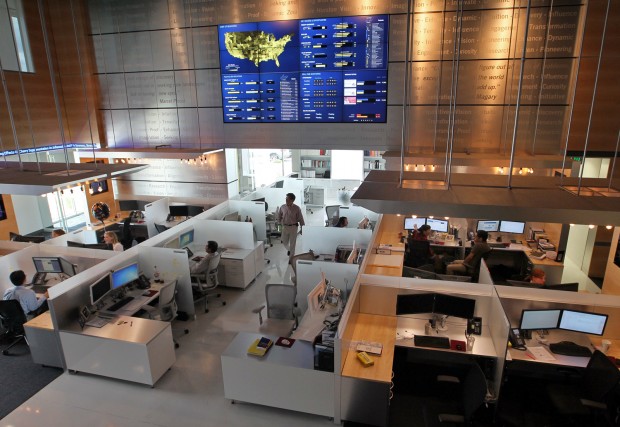 6/22/11 Wednesday, Berkeley -- The interior of Express Scripts new Research & New Solutions lab has an electronic board that tracks how people are taking (or not taking) their medications across the country. About two dozen people analyze the data and then find solutions to health care behaviors. J.B. Forbes jforbes@post-dispatch.com

When Express Scripts Inc. got blindsided this week by the nation's largest drugstore chain, Walgreen Co. — which publicly threatened to end their multibillion-dollar relationship — the episode marked an epic clash in the pharmaceutical industry.

Walgreen officials, in announcing they had canceled contract negotiations with the St. Louis-based pharmacy benefit manager, pronounced themselves "surprised" that Express Scripts had the temerity to drive such a hard bargain with "the largest retail provider in their pharmacy network."

The reaction from Express Scripts? Whatever — customers can just take their Express Scripts benefit cards to competitors literally down the block. "On average, another pharmacy within the Express Scripts network is within one-half mile of a Walgreens pharmacy," taunted a company release, while careful to also emphasize an interest in continuing talks.

Wall Street responded Tuesday by driving down Walgreen stock — while Express Scripts' shares inched up, apparently unaffected. While such brinksmanship often characterizes such high-stakes negotiations, and some analysts believe a deal will be forthcoming, the dust-up nonetheless underscored the extent to which Express Scripts has penetrated the market after years of explosive growth. And yet investors believe the company has capacity to grow further still, even as the company matures into an established player.

"If there's one thing that's constant, our company is focused on growth," said Larry Zarin, a senior vice president and chief marketing officer at Express Scripts.

For the second year in a row, Express Scripts is the Post-Dispatch's top-performing publicly traded company in the St. Louis region, based on the newspaper's analysis of revenue size and growth, return on capital and profit growth. It is the fourth time since 1992 that the company has claimed the distinction.

According to Moody's, other challenges faced by the industry include customer resistance on pricing and health care legislation.

Pharmacy benefit managers administer prescription drug benefits for employers, government agencies and health plans. They also help manage the amount of money their clients spend on drugs by encouraging employees to choose generic drugs, rather than brand-name medicines, and obtain these drugs via mail order (effectively skipping retail outlets such as Walgreens).

Moody's praised Express Scripts' financial flexibility but noted that the overall market for pharmacy benefit managers remains uncertain. United Healthcare indicated recently that it is exploring the efficiencies it might gain from "in-house" management of the pharmacy benefits of its $11 billion contract with Medco. Other health insurers, which are under mounting pressure to keep costs down, also may be considering the in-house option.

In the face of such challenges, Express Scripts seems determined to run lean. In a year of reorganization, the company laid off several hundred workers last year and shut down a prescription processing plant near Philadelphia. It opened a high-tech, heavily automated mail-order facility in northern St. Louis County. And like many other large companies, it has outsourced and sent offshore some of its operations.

"For the next five years, the growth looks good — and near term, it's pretty significant," said Art Henderson, an analyst at Jeffries & Co. in Nashville.

Henderson and other financial analysts said that, although 2011 has provided a bit of a market lull, Express Scripts is well-positioned to exploit the pipeline of drugs whose patents will expire in the next few years — by providing lower-cost generic drugs instead of branded ones.

The company makes higher profits on generic drugs because it can negotiate lower rates from the multiple drugmakers that offer generic substitutes for branded medications.

The patent on Lipitor, a blockbuster anti-cholesterol drug, is due to expire in December; and patents for other top-selling drugs, such as Plavix, antidepressant Lexapro, and Singulair (an asthma drug) are due to expire next year.

Express Scripts' profits on generics, however, could face incursions from government regulation. Some federal and state lawmakers have voiced the need for greater transparency from pharmacy benefit managers about their pricing schemes and acceptance of manufacturer rebates and discounts.

Express Scripts has received kudos from an industry trade association for its degree of transparency, but some lawmakers remain puzzled as to how exactly the company buys and sells prescription medications, how it chooses the drugs on its formularies, and from which kinds of transactions it reaps the largest profits.

Express Scripts spent about $1.9 million last year on federal lobbying activities about such issues as legislation, pricing, antitrust, Medicare payment rates, and generic versions of biotech drugs, according to records filed with the clerk's office of the U.S. House of Representatives.

Jeff Jonas, an analyst at Gabelli & Co. in Rye, N.Y., agreed that Express Scripts' has "a bright future" via the generic drug pipeline. But he said the firm also may continue to grow through acquisitions.

"There are still deals out there, either traditional PBMs or something along the lines of specialty companies that manage biotech drugs," Jonas said, "and their track record (for acquisitions) is pretty good."

In the past, Express Scripts has been able to grow its business by expanding its existing operations and acquiring competitors including National Prescriptions Administrators Inc. (2002), Curascript (2004) and Priority Healthcare (2005).

"Express Scripts is a very strong cash generator. … They're flush with cash, and they have good balance sheets," said Helene Wolk, an analyst at Sanford C. Bernstein & Co. Inc. in New York. "They still have enough flexibility to do acquisitions if one presents itself."

As one of the largest pharmacy benefit managers, it's unclear whether the Justice Department would permit Express Scripts to acquire one of its chief rivals (or, for that matter, to be acquired by one of them). The nation's top three PBMs control about 60 percent of the market. But the company could target a variety of other potential acquisitions.

With or without more acquisitions, Wolk said, it is likely that Express Scripts will experience a "robust growth swing of about 20 percent" in the next three to five years. "Express Scripts' earnings have been stellar in the last few years," Wolk said.

The company appears to want to build its business by becoming more competitive among larger employers. A substantial portion of the company's revenue depends on its contract to manage pharmacy benefits for the military's TriCare Program.

But analysts said Express Scripts has done well locking up long-term contracts with the Defense Department and Wellpoint.

The company is focused heavily these days on cost-cutting, reorganization and sending a portion of its information technology and customer support work to places like India and the Philippines.

"I can assure that we're always trying to get more efficient," Zarin said. "Our clients hire us to reduce costs, with no compromise to clinical outcomes. We are counted on to run lean and mean."

Still, pharmacy benefit managers including Express Scripts are expected to gain more business as an additional 32 million Americans are insured under the health reform law.

Jeff Hall, the firm's chief financial officer, said in a written statement that Express Scripts' research and innovation into consumer behavior "translate into strong returns for shareholders and superior outcomes for our plan sponsors and patients."

Later this year, the company plans to open its fourth headquarters building in northern St. Louis. "We are excited about further expanding our workforce in St. Louis," Hall said.

Editor's note: This story has been updated to correct an outdated number of prescriptions managed by Express Scripts Inc.

N/A - Not available
NM - Not meaningful
NR - Not ranked

Concern over lack of publicly traded firms here is misdirected

St. Louis has been losing corporate headquarters for years, and a recent rash of mergers threatens to accelerate the trend.

Annual Report is branching out

With this year's Annual Report, we're changing the way we do business in St. Louis — producing five special sections instead of one, and upgra…

All results are for fiscal year 2010 unless noted.

All results are for fiscal year 2010 unless noted.

This year, Olin is first place on our interactive table of St. Louis' top public companies, ranked by financial performance. All results are …

All results are for fiscal year 2011 unless noted.

6/22/11 Wednesday, Berkeley -- The interior of Express Scripts new Research & New Solutions lab has an electronic board that tracks how people are taking (or not taking) their medications across the country. About two dozen people analyze the data and then find solutions to health care behaviors. J.B. Forbes jforbes@post-dispatch.com