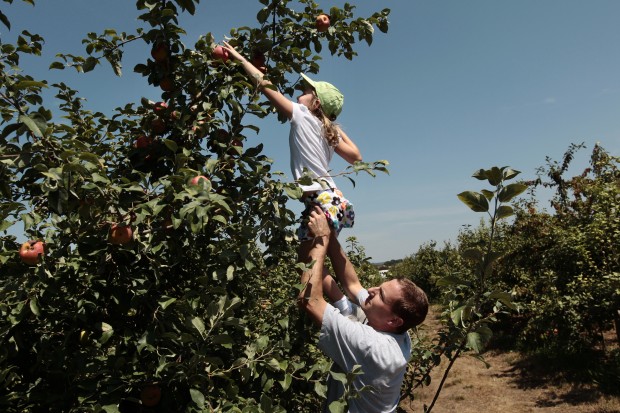 Dan Mitchell of Crestwood hoists his 6-year-old daughter, Claire, into the air to pick Honeycrisp apples at Eckert's in Belleville on Wednesday, Aug. 15, 2012. Mitchell was there with his wife, Carrie, and two other daughters, Ellie, 4, and Sophie, 4. Chris Eckert said the early spring and summer weather patterns have brought an early Honeycrisp apple harvest this year. Photo by Erik M. Lunsford, elunsford@post-dispatch.com 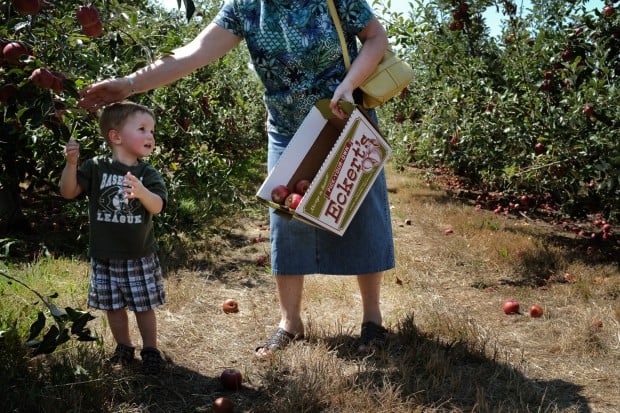 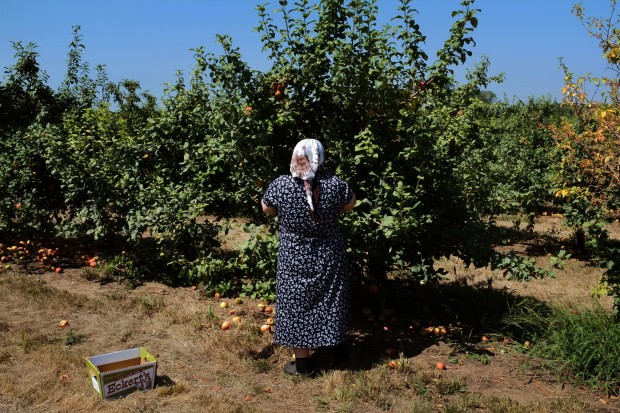 The peaches came early, then the apples, and now the grapes.

The hot, dry summer has decimated corn crops, threatened soybeans and put a good dent in vegetable production, but it has provided an early start for the region's fruit producers — and a good one.

"We want to be respectful of our neighbors growing corn and soybeans because this has been an awful year for them," said Charles Dressel, president of Mount Pleasant Winery in Branson, Mo. "But for anyone growing apples or peaches, or any type of vine fruit, the quality is just outstanding."

Drought conditions have tested vines throughout the region, but because the plants are deep-rooted, they have coped — and could even produce some of the best wines in years.

"A grapevine produces only so much natural sugar, natural acids and flavor compounds that make the grapes taste like grapes. The other ingredient is water," Dressel said. "There's not a lot of water this year, so what's happening is the grapes are absolutely concentrated with flavors."

The same concentration of flavors occurred with the peach crop, which came in two to three weeks earlier than normal, and with the apple harvest now already under way. "They're running a little smaller," said Agnes Kamp, owner of Kamp Peach Orchard in Golden Eagle, a town in Illinois' Calhoun County. "But they're tasting a lot sweeter."

While the sweet fruit has been an upside in an otherwise bad year for agriculture, growers are already concerned about next season. The trees set buds for next year's fruit now, and they're exhausted.

"We're kind of wondering if we'll get much of a crop next year," Kamp said. "They're working on setting buds right now, but it's been so hot, they haven't done that."

Chris Eckert, president of Eckert Orchards, is also concerned about how well the stressed trees will bud.

"We're worried, especially with the peaches, that there will be a lighter crop next year," he said.

"It takes more peaches to fill a box, so you end up with fewer boxes of peaches to sell," Eckert said.

Still, the peaches were exceptional.

"The drier the year, the more concentrated the flavors in the fruit," he said, adding that more sun means more sugar. That proved true for blackberries and strawberries, both of which yielded among the best harvests ever. The strawberry crop could have set records, had the April 28 hailstorm not damaged some of the crop, Eckert said.

News is also good for the apple crop. The orchard allowed people to start picking their own Honeycrisp apples last weekend, which is about two weeks earlier than it did last year.

A frost this spring decimated the apple crop in eastern parts of the country but opened up more selling opportunities for growers here, said Michele Warmund, a professor of horticulture at the University of Missouri.

"Wholesale apples are in demand," she said.

Schweizer Orchards in St. Joseph, Mo., which sells apples wholesale, has seen an uptick in business from states such as North Carolina and is nearly a month ahead of a normal year in picking and packing the apples, said company Vice President Cory Schweizer.

"We can't keep up with the demand," Schweizer said Wednesday.

Like tree fruit growers, who have had to pick, crate, ship and sell their produce weeks earlier than normal, grape growers and winemakers are having to adjust to an accelerated time frame.

"It caught us a little off guard. We had to hurry up and get ready," said Dale Rollings, of Yellow Farmhouse Winery in Defiance. "We didn't think we'd be harvesting until the last week of August."

The early harvest comes after a rough start to the season, with some vineyards losing as much as 25 percent of their grapes to spring frost.

"We've had more of an effect from the frost this spring than from the drought," said Paul Hopen, vineyard manager at August Winery. "But it's looking exceptional — in quality and quantity."

The drought conditions also have meant extra work in the vineyards, setting up irrigation systems and netting to keep away thirsty birds.

But, overall, growers say the heat and dry conditions have made life a little easier. "It's been a very long time since we've seen a crop like this," Dressel said. "This is really exciting for us."

There was a bright spot in the parched summer that sent scores of moisture-seeking pests indoors — at least the moles weren't too bad.

The market had a long-standing tradition of supporting local farmers and food producers.

Nearly 93 percent of Missouri suffers from “extreme” drought, up from 69 percent last week. That figure stands at 71 percent in Illinois.

Dan Mitchell of Crestwood hoists his 6-year-old daughter, Claire, into the air to pick Honeycrisp apples at Eckert's in Belleville on Wednesday, Aug. 15, 2012. Mitchell was there with his wife, Carrie, and two other daughters, Ellie, 4, and Sophie, 4. Chris Eckert said the early spring and summer weather patterns have brought an early Honeycrisp apple harvest this year. Photo by Erik M. Lunsford, elunsford@post-dispatch.com