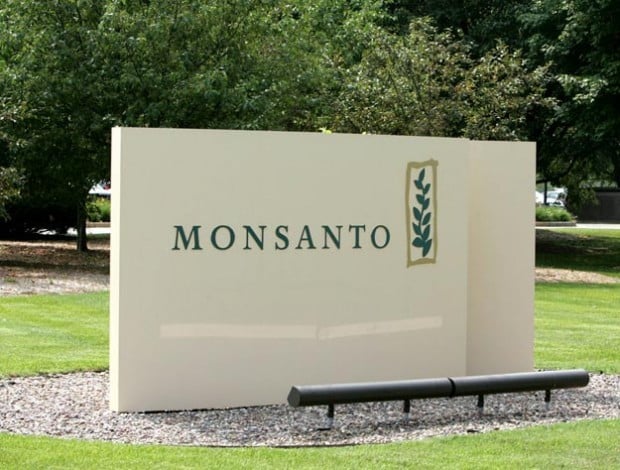 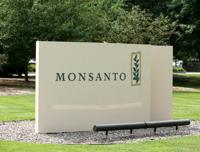 Monsanto is based in Creve Coeur. 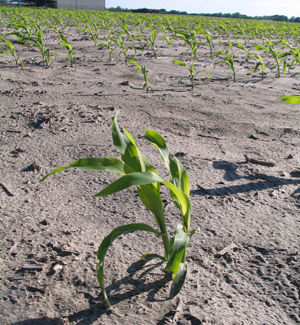 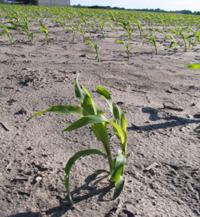 SARAH BARABA / JOURNAL A young stalk of sweet corn at Relleke Farms. Farmer John Relleke said he planted this corn in April, but has just been able to seed the rest of his fields given this year's wet and cool spring.
BY GEORGINA GUSTIN • > 314-340-8195

Farmers in the state's south are resorting to some old-fashioned tactics.

Weeds in cotton fields have gotten so tenacious — some with stems 4-inches around — that farmers are paying itinerant crews to chop them down by hand.

"In the Bootheel they're hiring people to go out there with hoes," said Blake Hurst, president of the Missouri Farm Bureau. "I swung a hoe for 15 years, and I fail to see the romance in it."

The problem, farmers and weed scientists say, is getting worse: Weeds are becoming increasingly resistant to Monsanto's Roundup, sold generically as glyphosate, forcing farmers to use other herbicides or "multiple modes of action." But during this season especially farmers are finding that these other modes of action aren't working either — and there appears to be little relief on the horizon. In Missouri, herbicide dealers have sold out of Cobra, one of the herbicides most widely used in tandem with glyphosate.

"Are they running out of options?" asked Aaron Hager, a weed scientist with the University of Illinois at Urbana-Champaign. "The simple answer is yes."

Farmers across the Midwest and South are, increasingly, using herbicide cocktails to combat weeds in cotton, corn and soybean fields.

"They're using about every bullet they have in their gun," said Derek Samples, a dealer with Agro Distribution in Portageville, about 150 miles south of St. Louis. "It's just been a nasty year."

"It's rather ironic that we were sold glyphosate as an alternative to these older pesticides, and now farmers are using them again," said Brett Lorenzen, a legal analyst with the Environmental Working Group, a Washington-based environmental advocacy group. "But that's part of the pattern of the pesticide industry."

Farmers say they're frustrated, not least because these additional herbicides and strategies are costing them profits. They admit, however, that commodity prices are high enough to justify the additional expenditure.

"It's easily costing $30 an acre for the hand weeding, and the pre-emergence herbicides are costing $10 and $20 an acre," said Tom Jennings, who farms cotton, rice, soy and corn near Sikeston. "If we see the markets drop back down, the economics are going to get a lot more difficult. As high as it is, we can afford some hand labor."

Over the past 15 years glyphosate has become a ubiquitous product on American farms. Its rise has coincided with unprecedented crop yields and profits for farmers and has helped propel Creve Coeur-based Monsanto into the world's most dominant seed maker.

But reliance on glyphosate, scientists say, has led to an explosion in weeds that are genetically adapting to withstand its application. These weeds adapt faster and more vigorously than their weed cousins, choking fields and clogging irrigation ditches so badly water can't pass through.

"Pollen can transfer the resistant trait; that's the problem," said Kevin Bradley, a weed scientist with the University of Missouri. "There's not much we can do about pollen flying through the air, and that's why we see such rapid spread of resistance."

In recent years, Monsanto has slashed prices, offered rebates to farmers and given incentives to buy other herbicides, even those of the company's competitors. The company has acknowledged the situation and admitted that, perhaps, it could have more aggressively worked to get the message out about alternative strategies. Farmers, too, have accepted some of the blame.

"It was so effective and so cheap compared to everything else, that's all you used," Jennings said. "Now we have problems out here and we don't have new herbicides. Before Roundup you had a new product every two or three years. Almost all the new products are just combinations of old products. There's no new chemistry."

Critics of the industry point out that Monsanto and its competitors have known about glyphosate resistance since the mid-1990s, when crops genetically engineered to withstand its application first hit the market. They say the companies should have more clearly warned about over-reliance on glyphosate sooner. Government-required labels urged farmers to use other herbicides in conjunction with glyphosate, but these suggestions were tucked away in fine print.

"It's hard to read a 54-page booklet," Lorenzen said. "Monsanto has been saying don't just use glyphosate, but farmers don't have time to read the label."

Lorenzen and other industry critics worry that the new herbicide cocktails farmers are using haven't been tested. The Environmental Protection Agency reviews individual herbicides, not combinations. "Nobody tests what happens when all those chemicals are combined together," he said. "Nobody knows."

Analysts, too, worry that the problem could hit profits.

"They've taken a big hit with [Roundup] already," said Jeff Windau, an analyst with Edward Jones. "So moving forward there could be more pressure on sales."

Windau also said that if farmers start spending too much to combat weeds then the benefits of genetically modified seed could diminish and they will stop buying it.

"There definitely could be issues there," he said.

There is, however, some hope in the pipeline. Monsanto is working on developing soybeans and cotton that are resistant to the chemical dicamba. The cotton could be on the market within three years.

Until then, farmers say, they're going to be spending more time in their fields, applying more chemicals, tilling and hoeing.

Research is the first to analyze publicly available data on pesticide.

Monsanto Co. announced Wednesday that the company is under investigation by the U.S. Securities and Exchange Commission for a program that offered incentives to dealers who sell the biotechnology giant's Roundup weedkiller.

Monsanto is based in Creve Coeur.

SARAH BARABA / JOURNAL A young stalk of sweet corn at Relleke Farms. Farmer John Relleke said he planted this corn in April, but has just been able to seed the rest of his fields given this year's wet and cool spring.
© Copyright 2021 STLtoday.com, 901 N. 10th St. St. Louis, MO | Terms of Use | Privacy Policy
Powered by BLOX Content Management System from TownNews.com.
You don't have any notifications.