ZURICH — Spiez Lab, a government-run institute in the Swiss mountains, was set up to protect the nation from nuclear, biological and chemical threats. “For a world without weapons of mass destruction,” runs its slogan.

It is now fighting another global menace — the coronavirus — by providing face masks, the demand for which is growing faster than the disease they’re meant to fend off. Hospitals treating COVID-19, the pandemic caused by the virus, can need up to nine times the protective equipment they do when dealing with normal flu, according to the American Hospital Association.

The Swiss lab acquires masks that are past their expiry dates, then tests them to see if they still work. “If yes, they’re being distributed to the health care system via military pharmacies,” said spokesman Andreas Bucher.

So far, he said, Spiez Lab has distributed 10.2 million masks. That’s a lot for an institute better known for its expertise on deadly nerve agents. But globally, it’s a drop in an ocean of need. In Switzerland, whose population of 8.2 million is about the size of New York City, it would amount to less than 10 days’ supply, based on estimates by the Swiss government.

FILE PHOTO: Various N95 respiration masks at a laboratory of 3M, that has been contracted by the U.S. government to produce extra marks in res…

Across the world, frontline medical staff are clamoring for face masks and other personal protective equipment (PPE). Even as China, the world’s main supplier, comes back onstream, companies around the globe are battling a host of obstacles, from illness to freight costs, from hoarding to a supply squeeze on filter fabric.

In the United States, the new epicenter of the pandemic, shortages are so acute that health workers have taken to social media to appeal for help under the hashtag #GetMePPE.

The U.S. Department of Health and Human Services has said that over the next 18 months it aims to buy 500 million masks for the Strategic National Stockpile, the nation’s supply of pharmaceuticals and medical supplies. The Federal Emergency Management Agency is distributing masks, but it’s “not easy” for the federal government to help states obtain the equipment, President Donald Trump said on Tuesday.

Frontline medical staff in many countries say shortages of masks and other equipment have left them vulnerable to catching the virus — which forces them into isolation and reduces staff numbers. Madrid’s doctors’ union has filed a lawsuit to try to force the regional health authority to deliver scrubs, masks and goggles to hospitals and other health centers. A spokesman for the authority declined to comment.

Medical staff in the Netherlands blame the lack of masks for the high rates of coronavirus infection among them — the health ministry disputes that but acknowledges the shortage. Almost a quarter of the 2,994 people infected as of March 20 worked in health care, according to the last available data from the National Institute for Health.

There are two main kinds of mask: The surgical masks worn routinely on many Asian streets, which can provide some protection; and the higher-standard respirators, often known by designations such as N95 or FFP (“filtering facepiece”), which are meant for medical procedures to protect workers from the droplets through which the virus spreads.

Demand for all of them has skyrocketed.

U.S. hospitals are rapidly running down their supplies despite efforts to procure more masks from private and government sources, healthcare executives and industry spokespeople say.

But many hospitals say they only have enough masks for several days, Gillan said.

As unused masks age, the materials they are made of degrade so they offer decreasing protection: Spiez Lab identifies those that are still safe. Other institutions and companies across the world have also retooled their operations to produce face masks. The effort resembles the Allied munitions drives of World War II.

Masks are being made in Germany by Zettl Automotive, a car supplier that usually makes seat covers for BMWs and Porsches; in Italy and Spain, by Prada and other fashion companies; and in the Czech republic, by a producer of boxer shorts and panties called Styx.

“We have completely switched production from underwear to masks,” said its executive director Ruslan Skopal.

Such surgical masks, while they may help meet consumer demand, are not always helpful in hospitals. “Everything we use in hospitals must be regulated,” said Benito Almirante, head of infectious diseases at the Vall D’Hebron hospital in Barcelona.

“The masks made in all these altruistic projects cannot be used in hospitals because they are not regulated.... It’s better these kinds of masks are used for going to the supermarket, leaving the regulation material for health workers.”

The real boost to global supply of such masks will come from China, the world’s largest mask manufacturer which makes about half global production. It is now emerging from its own epidemic and ramping up production for both the domestic and international market.

By Feb. 29, the country was producing 116 million masks a day, China’s state media CCTV reported on March 2, citing data obtained from National Development and Reform Commission (NDRC). The NDRC told companies that it would buy and store any surplus output after the outbreak.

Even the China National Petroleum Corp. has joined the effort to produce face masks. It expects to be able to make 1.5 million a day by the end of March, Xinhua reported on Wednesday.

In February, at the peak of China’s outbreak, the entire output of Shenzhen-based Allmed Medical Products’s N95 masks was bought by the government.

Since resuming commercial export orders last week, Allmed has been flooded with overseas requests, but has only signed deals from North American and only with clients the company is familiar with or which are backed by governments, said a company representative.

Its factories in Hubei province, the epicenter of the virus, can produce up to 250,000 N95-standard masks a day, which is “much higher” than the pre-outbreak capacity, said the representative.

Other problems remain. In some countries, manufacturing and distribution has been hampered by supply chain problems, a precipitous drop in available air freight, and export restrictions by governments desperate to hang on to dwindling supplies.

Other countries including India, South Korea, Taiwan, France and Germany have restricted or temporarily banned exports of medical equipment. Turkish authorities carried out simultaneous raids on the depots of face mask producers earlier this week to demand they sign contracts with the Health Ministry and stop hoarding stock, local media reported.

In Ukraine, which has banned mask exports, border guards last week arrested a man in a wetsuit who they said was trying to smuggle masks across a river into Romania. They have also seized thousands of masks at border checkpoints.

Some governments and multinational companies are donating shipments of masks to countries in need. But industrial mask-makers also face a bottleneck of a key component: Melt-blown polypropylene, the non-woven polymer fabric that forms the filter in most masks, which is made by smaller companies with limited capacity.

“Trying to find a supplier who hasn’t sold out for the next six months is hard,” said Christopher Dobbing, the CEO and founder of Cambridge Mask Co., a small producer in Britain.

Prices were up to 15 times higher than when the pandemic began, said Dobbing.

Demand for his firm’s masks had increased twelvefold, he added, “and that is for people willing to buy a mask now for delivery in 8 to 10 weeks time.”

In one sign of the strain many countries face, the Dutch minister for medical care, Bruno Bruins, collapsed from exhaustion last week during questioning in parliament about face masks, and resigned the next day.

In the Netherlands as elsewhere, acute shortages have forced medical staff to use one mask with multiple patients or to buy masks usually used for construction work.

“Everyone just took matters into their own hands,” said a doctor in the capital, Amsterdam, who asked not to be named because of the sensitivity of the issue.

In a statement to Reuters, a spokesman for the Dutch Health Ministry said it was “working around the clock” to address the shortage, which he blamed on the surge in demand.

The country’s National Institute of Health, which sets the guidelines for safety gear, has asked doctors to keep used masks for re-use after cleaning.

UNIVERSITY CITY — A Schnucks grocery store worker has tested positive for COVID-19, the company said on Tuesday, and five other employees are …

Enterprise Holdings furloughs some workers and cuts pay for others

Missouri Gov. Mike Parson has declined to issue a statewide stay-home order, opting instead to limit gatherings of more than 10 people and leaving it to local governments to issue stricter orders.

‘If people do get their unemployment checks and stimulus checks and the shutdown doesn’t last more than three or four weeks in St. Louis, there’s no reason people can’t pay the damn rent,’ lawyer says.

The world’s biggest food products company has 291,000 employees across the world. 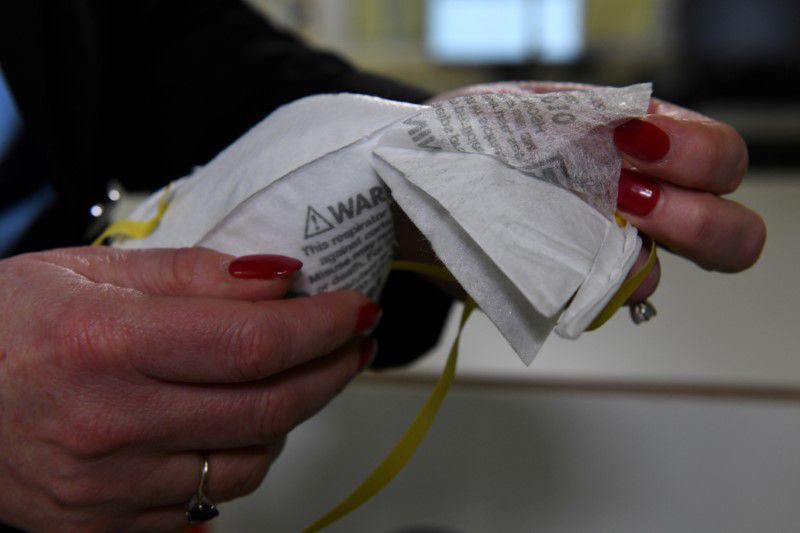 FILE PHOTO: Dr. Nicole McCullough, a global health and safety expert at 3M, reveals the various layers of a N95 respirator mask, which includes the proprietary filter media, the middle layer, during a media demonstration at a laboratory of 3M . The company has been contracted by the U.S. government to produce extra marks in response to the country's novel coronavirus outbreak, in Maplewood, Minn., on March 4, 2020. REUTERS/Nicholas Pfosi 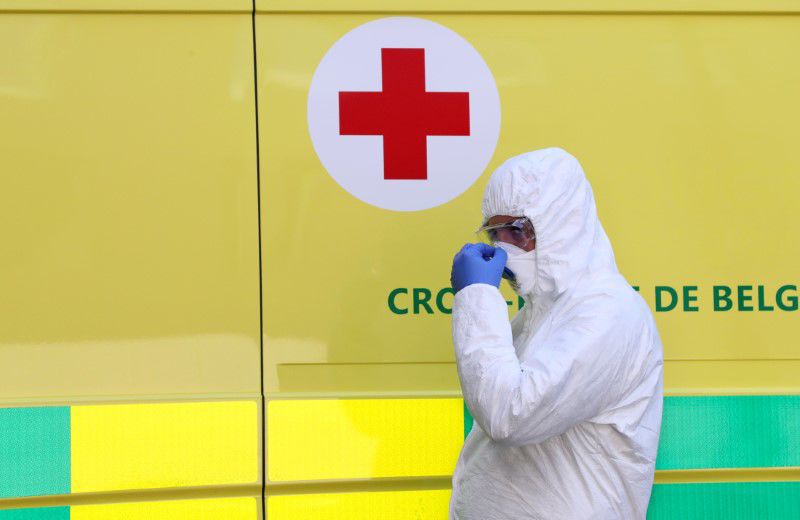 FILE PHOTO: A medical staff adjust their protective mask while the patients affected by COVID-19 arrive at the CHC Montlegia hospital, as the health sector expects a rise of people hit by an outbreak of coronavirus disease (COVID-19) in Liege, Belgium on March 23, 2020. REUTERS/Yves Herman 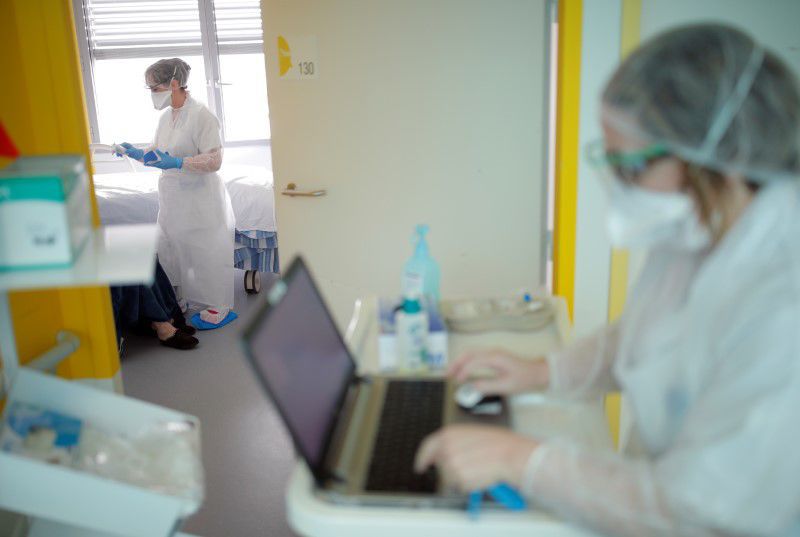 FILE PHOTO: Medical workers wearing protective masks and suits are seen at the pulmonology unit at the hospital in Vannes where patients suffering from coronavirus disease (COVID-19) are treated, France, March 20, 2020. REUTERS/Stephane Mahe - 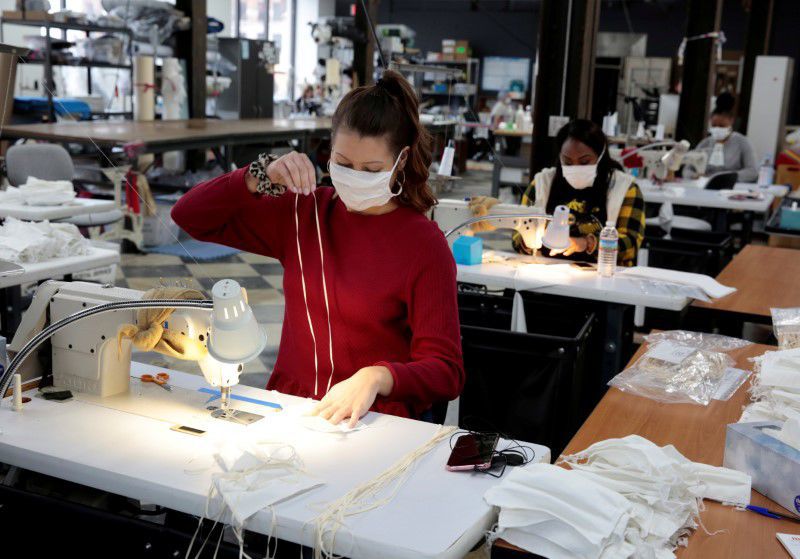 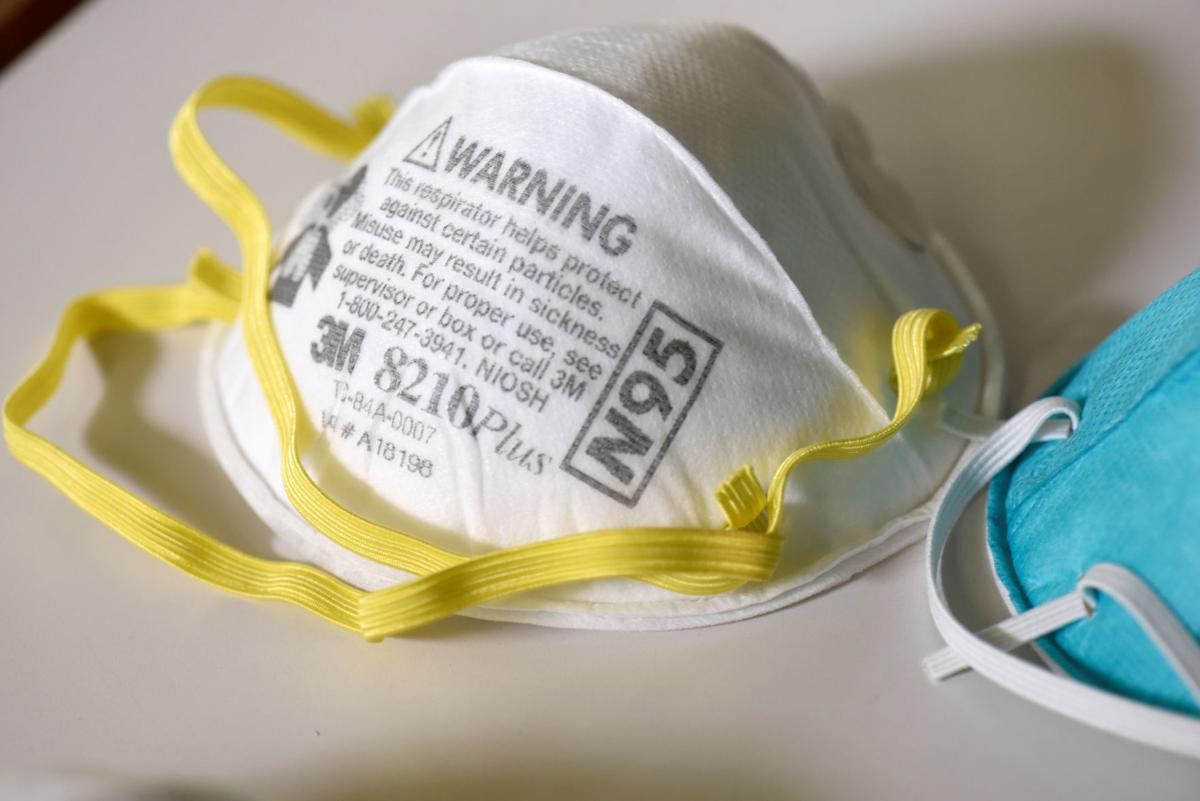 FILE PHOTO: Various N95 respiration masks at a laboratory of 3M, that has been contracted by the U.S. government to produce extra marks in response to the country's novel coronavirus outbreak, in Maplewood, Minnesota, U.S. March 4, 2020. Picture taken March 4, 2020. REUTERS/Nicholas Pfosi