At the gas pump, U.S. biofuel lobby scores a point against big oil
0 comments
Share this
{{featured_button_text}}
1 of 2 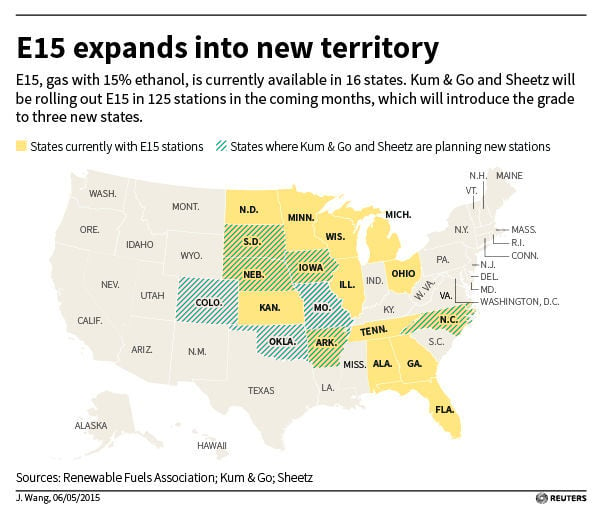 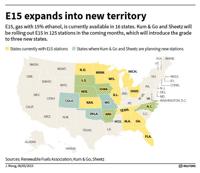 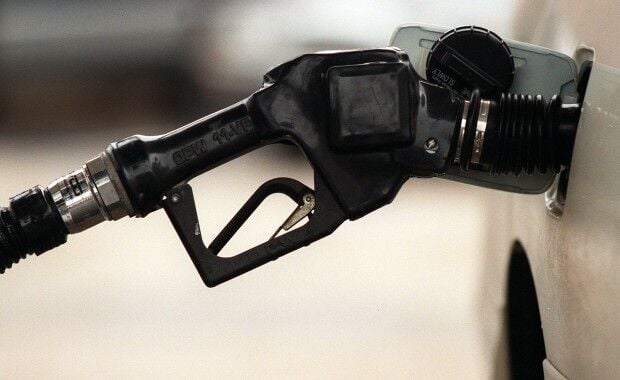 NEW YORK • In a long-running battle between oil refiners and the U.S. farm lobby over the future of ethanol fuel, biofuel producers may have just made a small, but important dent in big oil’s formidable defenses.

Over the past few months, privately held retailers Kum & Go and Sheetz have become the first significant chains to announce plans to start selling E15, a gasoline with 15 percent of ethanol, 50 percent more than the typical U.S. blend.

By the end of 2016, those two retailers plan to add E15 at pumps at 125 stations. That will more than double the number of U.S. outlets offering cheaper fuel with a higher ethanol content than the standard E10 blend that contains 10 percent of ethanol.

If retailers continued to add stations at a similar pace over the next five years, there would be some 1,300 stations offering E15.

That would still be just a fraction of the 150,000 stations nationwide, but the rollout of the fuel by two significant operators with outlets in 17 states challenges a central pillar of oil industry’s opposition to ethanol’s wider use.

Effectively forced to surrender a tenth of the U.S. market by government policies promoting biofuels, oil firms have argued the U.S. market for ethanol has reached a saturation point.

“Until now, the conversation around E15 was: why in the world would you have that?” said John Eichberger, executive director of the National Association of Convenience Stores’ Fuels Institute. “Now, it’s that there may be a reason, an economic incentive.”

For retailers that blend their own fuel, the incentives are clear.

Bumper crops have sent corn prices tumbling and shaved a quarter off ethanol’s cost over the past year. At the same time blenders, such as Kum & Go and Sheetz get government credits for mixing in ethanol, which they can sell to oil companies that need them to meet federal biofuels targets.

Ultimately at stake is about $15 billion oil firms would lose to ethanol producers in a motor-fuel market worth $370 billion, based on futures and retail prices compiled by the U.S. government, if E15 replaced E10 as the new standard.

Based on last year’s E10 consumption, Aakash Doshi, vice president at Citigroup in New York, estimates countrywide adoption of E15 would boost ethanol-for-fuel consumption by 40 percent to some 20 billion gallons.

That increase would propel consumption in the United States beyond the level set by the 2007 biofuels policy of some 15 billion gallons annually through 2022.

“It’ll be years before E15 really takes off, but it is becoming a larger market,” Doshi said.

Even incremental increases in E15 use would be a boon for corn producers as ethanol inventories stay at multiyear highs.

Eichberger, whose group represents gas retailers and fuel blenders, warns E15 has yet to win broader acceptance among retailers and drivers.

Long painted by oil firms as an engine-killer, E15 has been cleared by the U.S. authorities as safe for most newer cars and several manufacturers including Audi, Ford and GM have approved its use in newer models.

But the majority of automobiles on the road are not approved to run on E15 and drivers who use it could risk losing their warranty.

Selling for 5-10 cents a gallon less than an already cheap E10, the higher blend may still appeal to cost-conscious drivers and an important test of its popularity will be whether it can spread beyond the Midwest, the U.S. farm and biofuel heartland.

Kum & Go started its rollout in April in Iowa, the largest ethanol-producing state and the center of political support for the renewable fuels, and will add it at pumps in six more states. (The chain has more than 40 locations in Missouri, most clustered around Springfield.)

Sheetz plans to start offering the fuel by the end of this month and will have it at 60 stations throughout North Carolina by spring 2016, a company spokeswoman said.

E15 arrives in Missouri, though consumers may have to look hard to find it

Missouri rule allows higher ethanol blend, but adoption will not take off without change in policy, prices.