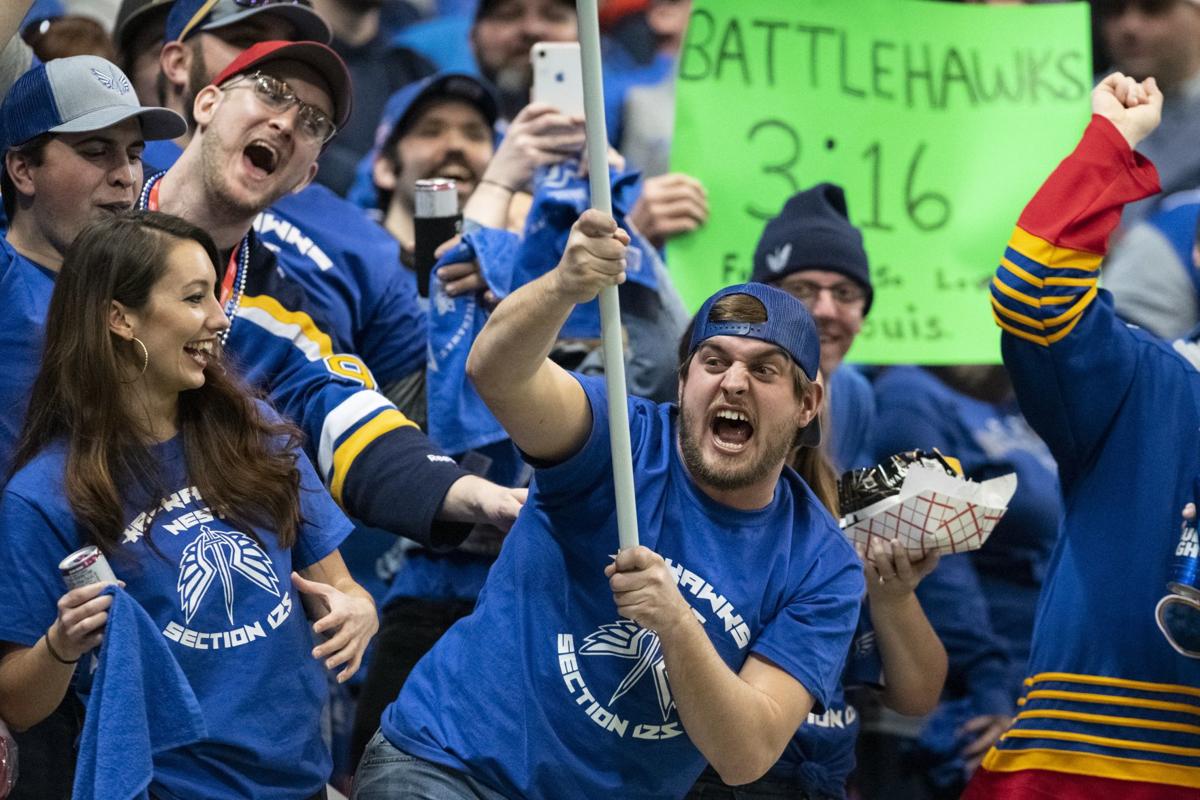 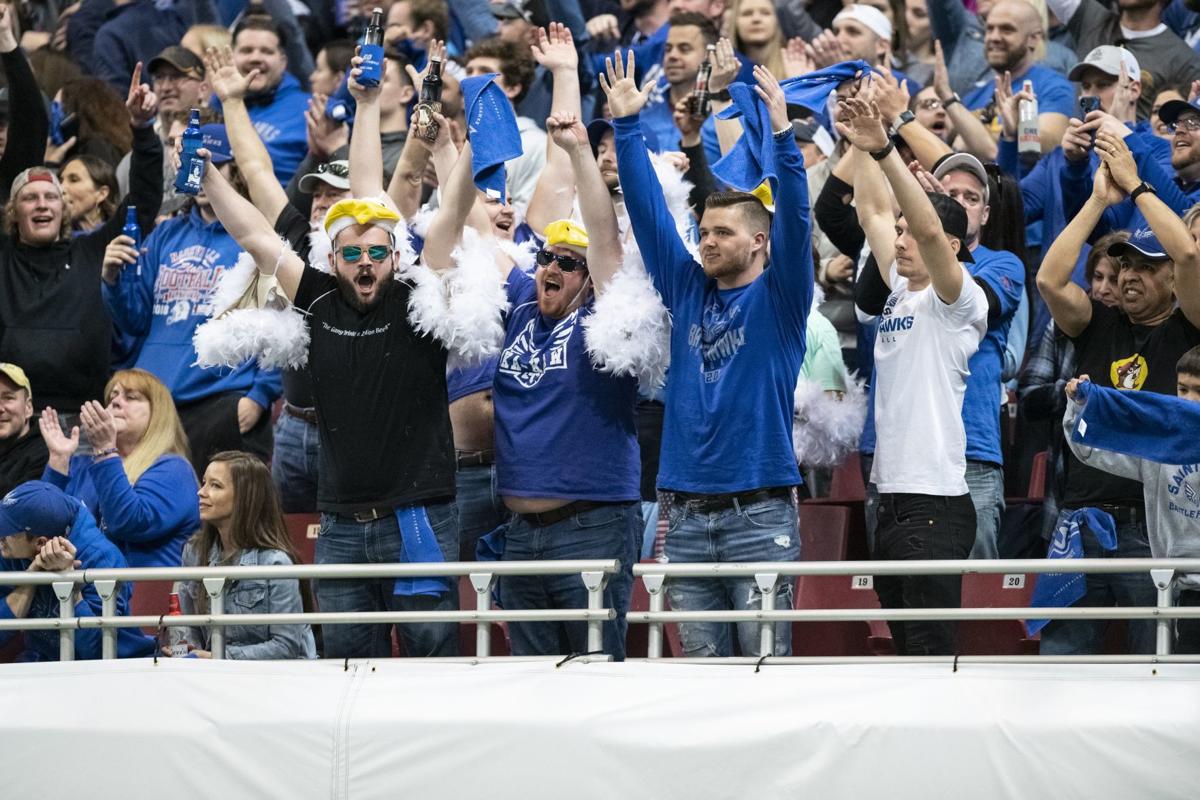 Feathered fans whoop it up as the BattleHawks take on the Seattle Dragons in The Dome on Saturday, Feb. 29, 2020, in St. Louis. The BattleHawks won the XFL game 23-16. (Lexi Browning, lbrowning@post-dispatch.com)

ST. LOUIS — By the time the BattleHawks landed in St. Louis last month, football fans had long since relegated their old Rams gear to the giveaway pile — or the rag bin.

They were hungry to cheer for first downs and field goals. They just needed something to wear.

“It’s so ridiculous that it’s fun, and we wanted to drive that home,” said Aaron Park, owner of Arch Apparel, about the ubiquitous bird ka-call — the team’s unofficial chant — that echoed onto signs, shirts and even a duvet cover since the XFL introduced the predatory mascot in August.

Park’s Brentwood store shifted into BattleHawks mode early in the new year, after picking up on the buzz of anticipation from holiday shoppers. Going into the first home game, a sellout victory over the New York Guardians, Arch Apparel doubled its normal walk-in traffic.

Then, just like that, everything ground to a halt.

The eight-team XFL announced it was ending its season March 12, the last domino of professional sports leagues to cancel or postpone games amid the spread of the new coronavirus.

Half the season was left unplayed. Boxes of merchandise sat in stores, the relics of what Park called a “mini Stanley Cup,” an unexpected boon sandwiched into what’s typically a lull in business between the Super Bowl and baseball season.

St. Louisans who were licking their wounds when Stan Kroenke scampered to Los Angeles with the Rams five years ago had opened their hearts — and pocketbooks — to the Hawks.

In February, Arch Apparel moved about 3,000 pieces of BattleHawks apparel, in more than a dozen designs. It bolstered its sales with a pop-up shop in Ballpark Village before the Hawks’ first two home games.

Zoey’s Attic, a boutique in Webster Groves, also set up its first traveling booth, selling “Ka Kaw is the Law” and “STL BattleHawks” shirts to pregamers and bar-hoppers.

The Webster Groves’ store specializes in individualized, made-to-order items such as monogrammed onesies and bachelorette-party crewnecks. Sports gear is not its bread and butter.

But the store’s jump on the bandwagon ended up being a brief one. Delanty never got a chance to make the BattleHawks hats his customers had requested.

Ready for next year

When the XFL announced the cancellation, the league vowed it was “committed to playing a full season in 2021.”

Last fall, Aaron Mednik set up a Facebook group to organize home-game tailgate parties and talk about the team.

“There’s been a groundswell of interest in the BattleHawks,” Mednik said. His XFL STL BattleHawks Squadron Tailgate page quickly grew to 2,200 followers, double the size of what his Rams crew was.

In the days after the cancellation, members lamented the loss and speculated about next year. They posted selfies in all manner of BattleHawks hats, T-shirts and hoodies.

“The league has been slow to get merchandise out, and people are going homegrown,” said Mednik.

The XFL sells licenses to use BattleHawks assets — the custom font; silver sword logo with wings; “cleared to engage” motto — but got backlogged, Arch Apparel’s Park said. Even if the full three-month season had been played, the league’s St. Louis marketing team had told him local licenses might not go through until after it was over. Representatives for the XFL declined to comment.

The gap in supply and demand left an opening for smaller operations, both legal and bootleg, to claw their way into the BattleHawks’ fray, showcasing their collections on Etsy, Amazon and Facebook Marketplace.

Amy Presson and Jessica Hupp fired up their heat-press machine when they saw posts on the Squadron’s page from fans who couldn’t find the BattleHawks designs they wanted. The sisters run Busy B Boutique out of Presson’s home in O’Fallon, Missouri, as a side business.

For a while, they were filling orders well into the night. A blue glitter “Ka Kaw” long-sleeve T-shirt was their bestseller.

People wanted to be ready to show up to the games, Presson said.

Even the most casual of football fans got swept up in BattleHawks fervor.

In early March, STL-Style rolled out a limited run T-shirt that takes aim at the Rams owner who denigrated St. Louis as he was taking his football and going home. A hawk flies over Kroenke’s name, leaving little to the imagination as to what it thinks of the mustachioed billionaire.

“It’s a more irreverent kind of shirt,” said Randy Vines, co-owner of STL-Style. “There was plenty of material to promote and exploit. We couldn’t not do it.”

The customers at his Cherokee Street silkscreening shop aren’t typically looking for sports merchandise, Vines said. But they always want to stand up for their city.

He is confident that when the coronoavirus crisis has passed, shops have reopened their doors and sports have resumed, enthusiasm for the BattleHawks will still burn.

“The underlying fervor supersedes the team itself,” he said. “It’s a rallying cry of ‘this is our city!’”

Empty 47 acres, left behind from mall's 2013 closure, will stay empty as the would-be developer cited concerns from the coronavirus pandemic.

The unanimous 56-page ruling handed down on Wednesday by three judges from the U.S. Ninth Circuit Court of Appeals in San Francisco said that the Environmental Protection Agency’s most recent approval of top dicamba herbicides in 2018 “substantially understated” multiple risks recognized by the agency, and “also entirely failed to acknowledge" others.

Cone-sumers can stop in next door for T-shirts, postcards, even face masks.

Environmental groups say XtendiMax not only harms nearby crops and plants but wildlife as well.

Feathered fans whoop it up as the BattleHawks take on the Seattle Dragons in The Dome on Saturday, Feb. 29, 2020, in St. Louis. The BattleHawks won the XFL game 23-16. (Lexi Browning, lbrowning@post-dispatch.com)