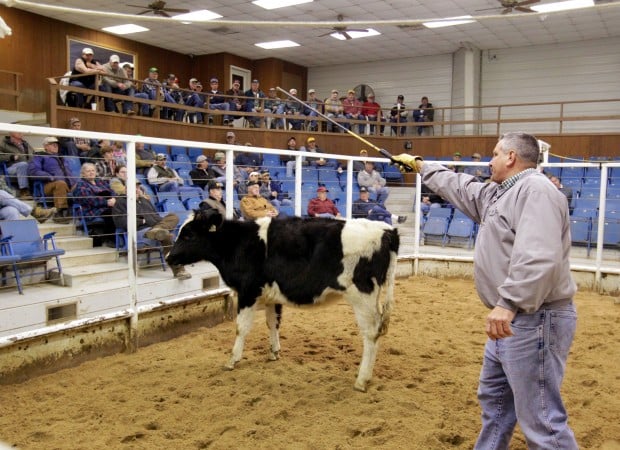 David Means with Callaway Livestock Center  acknowledges a bid on a feeder cow during a cattle auction in Callaway County, Mo., on Monday Jan. 23, 2012. Photo by Christian Gooden, cgooden@post-dispatch.com 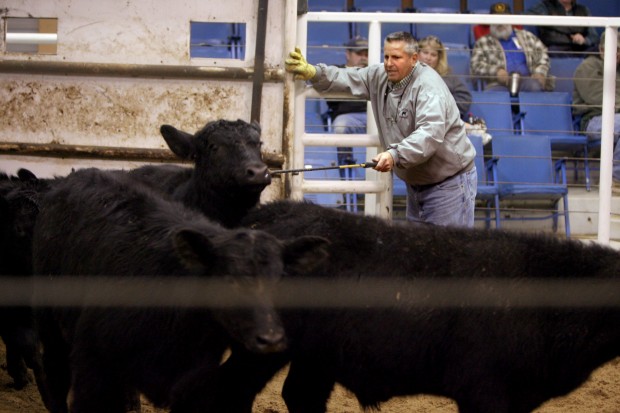 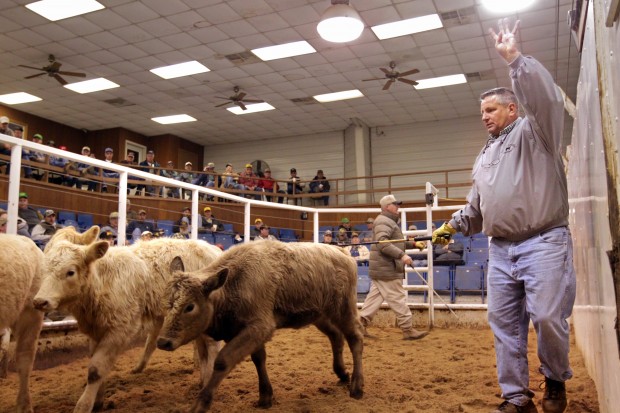 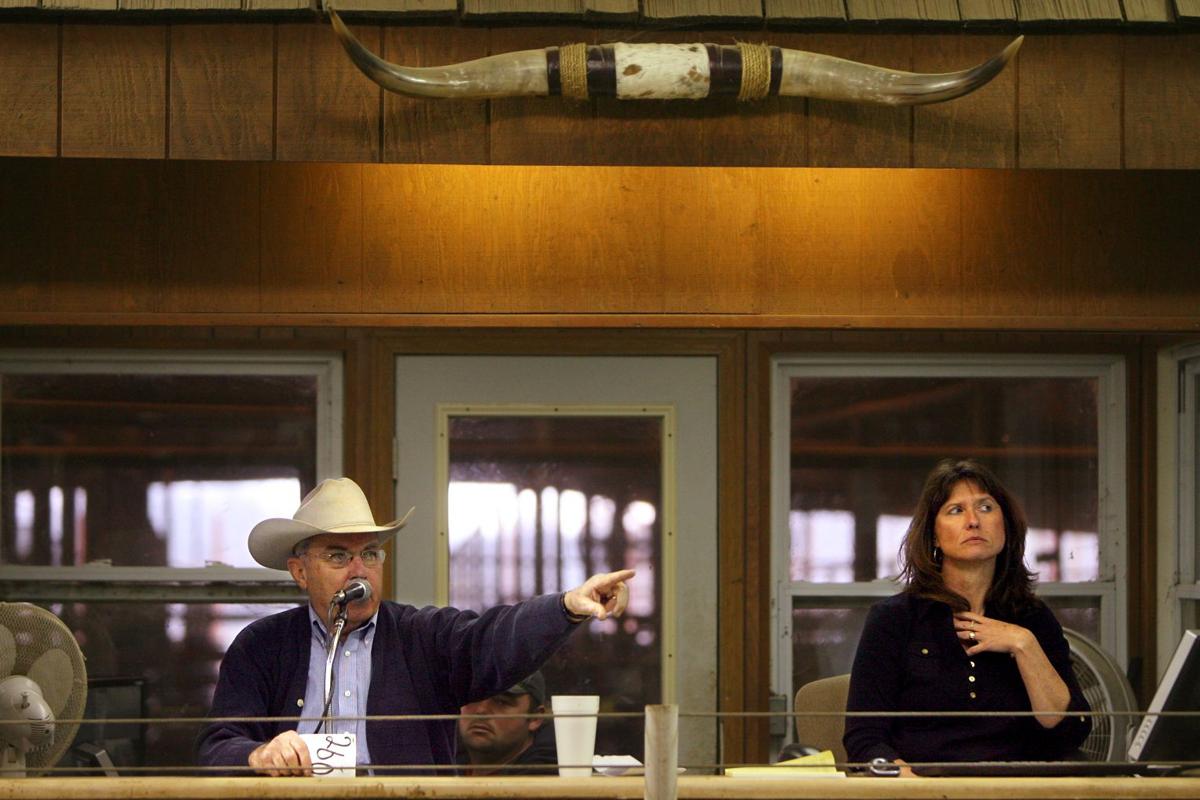 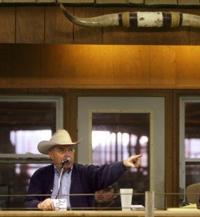 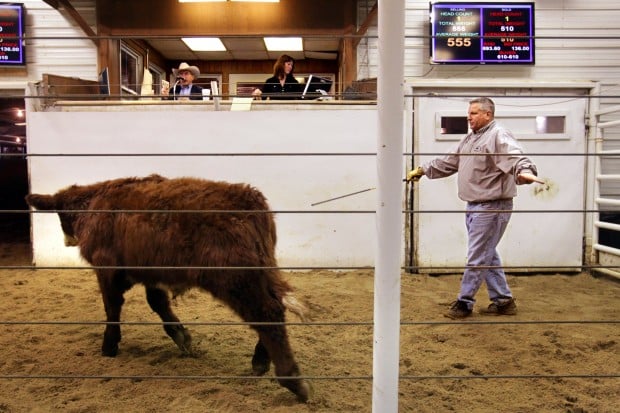 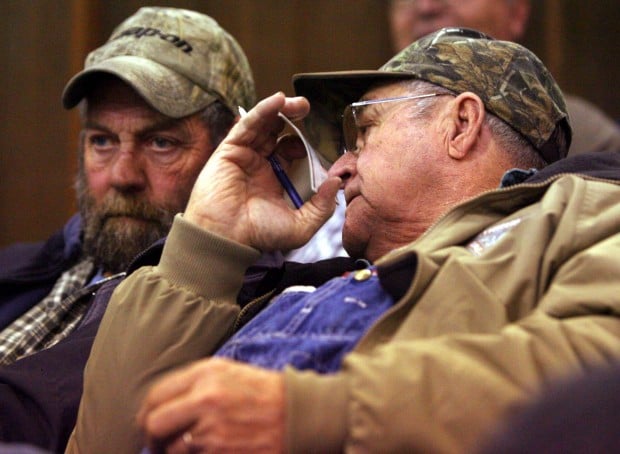 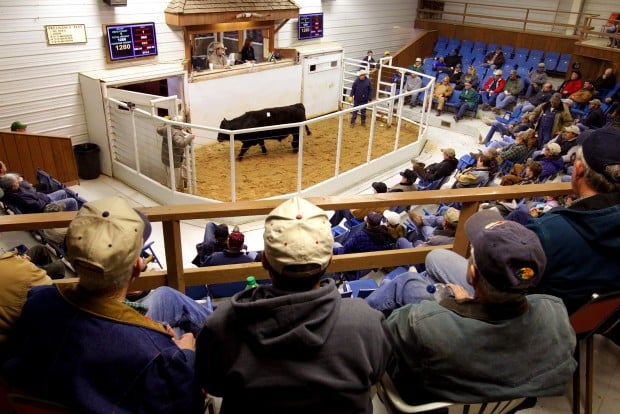 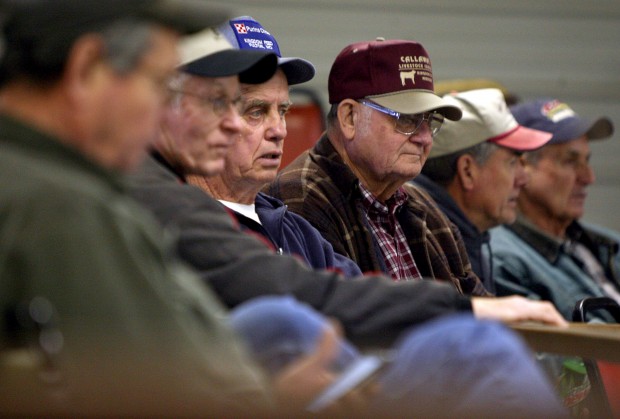 For anyone who loves a good steak, a juicy burger or a nice Sunday roast, these are anxious times.

Prices for beef, which have been climbing for months, hit a record high in December - an average of $5 a pound — and analysts predict they could climb 5 to 8 percent higher this year.

"Prices have gone up quite a bit. That usually happens around the holidays, but we expect them to come down," said Pam Neal, owner of Al's Steakhouse, north of Laclede's Landing. "Not this time. They're going to be jumping even higher. It's hard to handle."

Beef prices are soaring for a number of reasons. Producers, who struggled with high feed costs and diminishing profits, began shrinking their herds roughly five years ago. Since then demand from overseas markets has shot up - roughly 11 percent of American beef went overseas last year, another record — claiming more American beef.

In July of last year, the US beef herd had dropped to its lowest point since1958. Also last year, a drought in Texas and Oklahoma, the top two cattle-producing states, forced producers to cull herds. That means that the 2012 cattle numbers, due out this week, will be even lower. Some estimates predict the country's cattle herd could shrink by 600,000 head this year. Last year's cow inventory was 30.9 million, while the total number of cattle was 92.6 million.

"There's not enough beef out there," said Ron Plain, an agricultural economist with the University of Missouri. "This year, there's going to be less beef, more people, the supply is going to be tighter, and that means more records."

Compounding matters for beef lovers are soaring feed, fuel and production costs, which are forcing price increases all along the production chain.

"Look at our fertilizer costs, our grain costs. Any piece of machinery we buy has just gone up," said Tom Sachs, who raises cattle in St. Charles County. "Our input costs are just really high.."

For Missouri's $3 to $4-billion cattle industry, which currently raises the third-highest number of calves in the nation, and for the nation's cattle industry in general, the numbers come as good news. Prices, per pound for a steer, were $1.75 on Tuesday, compared to about 95 cents 5 years ago. For the average 1,300-pound steer, that adds up.

"Times are good," said Mike Miller, of Cattlefax, a Colorado-based cattle industry research firm. "Our expectation is it's going to be good for some time."

But the good times for the industry have not come without effort.

Since 1980, according to the U.S. Department of Agriculture, per capita beef consumption has plummeted 25 percent. In 2011, the average American consumed 57.6 pounds of beef, down 13 percent from a decade prior. This year the number is predicted to decline again to 54.1 pounds.

The reasons for the decline are difficult to isolate. But they include health concerns over the higher fat content in red meat, worries about humane treatment and links to environmental problems, including greenhouse gasses, all of which have gotten a lot of attention in recent years. Some people point to public health campaigns, such as "Meatless Mondays," for the shrinking numbers.

The industry insists the American appetite for beef is still strong, while some analysts and researchers suggest the decline, at least in recent years, is simply due to the recession.

"These non-economic factors are really tough to talk about," said Scott Brown, a livestock economist with the Food and Agricultural Policy Research Center at the University of Missouri. "Frankly, when the consumer goes to the store or restaurant, it's the relative price that's driving their decision."

Whatever the reason for the decline, the country's cattle producers have helped compensated for it by making inroads into overseas markets, particularly in Asia.

"Worldwide consumption of meat and demand has increased," said Jeff Windett, who heads the Missouri Cattlemen's Association. "I think it's just good business sense to expand market opportunities for producers."

"Tripe, ox tail, tongue — some of those kinds of meat sell for a lot of money," Windett explained. "It's really creating a market for some of those variety meats and adding value to the carcass overall."

Japan, a major beef importer, restricted US beef in 2003 after an outbreak of Mad Cow disease, but has since eased the barriers. With Japan a major trade destination again, American beef exports are poised to hit another record this year - nearly $5 billion. China, which does not officially import US beef, could be on the horizon.

"It spells a very bright spot for the US beef industry," Brown said. "There are just a lot of things on the trade front that look to be very positive.".

That will, inevitably, put more pressure on prices in American supermarkets, at least in the short term. Because cattle herds take years to rebuild and require huge amounts of capital, it could be some time before the American cattle inventory can help even out costs to consumers.

In the meantime, retailers, restaurants, butchers and shoppers are all getting creative.

"Customers are almost by default moving toward value cuts," said Michael Cornelius, the chain's meat director. "We're trying to make sure there are items out there that address the value-consciousness of the customers."

At Kenrick's Meat and Catering, in south city, the meat counter has seen more customers looking for sales.

"People are eating more pork, but overall they're just being more economical," said manager Steven Weinmann. "They're buying on sale. When everything was cheaper, people just bought by taste."

At Kreis Steakhouse, on TK, owner George Tompras has been keeping an eye out for good values, too, but says he's just managing to cover his costs.

Al's, which just celebrated it's 87th year in business, recently made a change to a long-standing tradition. Responding to customers' concerns, the restaurant decided that instead of just displaying the beef cuts to diners on a tray, it would offer paper menus, with prices.

"We wanted to keep the elegance, the tradition," Neal explained. "But we wanted to make sure people knew how much something was going to cost."

St. Louis region is warming up for gardeners

The National Weather Service forecast calls for highs near 63 today and in the 50s through Friday.

Meat prices on the rise

Prices for beef overall hit a record high in December. Even prices for economical ground chuck have climbed over the last five years.

Record drought ravaged parts of Texas and Oklahoma this year, but Missouri was hard hit, too.

Among recommendations in the legislation are setting permit fees.

After a record year, farmers may find less going into their pockets in 2012.

It's part of a sweeping effort to eliminate costs and streamline the agency's operations.

David Means with Callaway Livestock Center  acknowledges a bid on a feeder cow during a cattle auction in Callaway County, Mo., on Monday Jan. 23, 2012. Photo by Christian Gooden, cgooden@post-dispatch.com