Beer battle between wholesalers, brewers
0 comments
Share this
{{featured_button_text}}
1 of 2 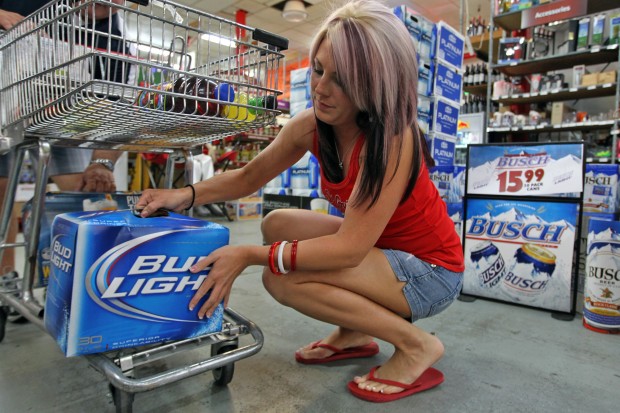 Lindsay Peel stocks up for an upcoming party with a case of Bud Light at Randall's Wines & Spirits on Thursday, May 3, 2012, in St. Louis. Photo by Laurie Skrivan, lskrivan@post-dispatch.com 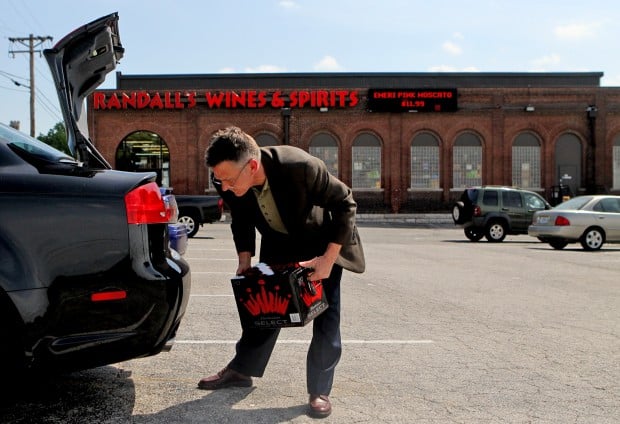 Preparing for a party, Dr. Rob Bernardi of St. Louis loads liquor into his car outside Randall's Wines & Spirits in St. Louis on Thursday, May 3, 2012. Photo by Laurie Skrivan, lskrivan@post-dispatch.com

There’s a rumble brewing over how you get your beer. And the newest front has opened right in the backyard of America’s biggest brewer.

Beer wholesalers — the people who truck the suds from brewery to store shelf — are pushing a bill in the Missouri Legislature that would protect their role as middlemen, by banning brewers from owning wholesalers and codifying the industry’s vaunted three-tier distribution system into state law.

It’s a pre-emptive strike against Anheuser-Busch InBev, which wants to streamline its complex distribution network, and a sign of increased tension between the big brewer and the people who deliver its product. The fallout from that dispute could eventually affect everything from the price of beer to what brands are on the shelf.

While state laws vary, the three-tier system — in which separate companies make beer, ship it, and sell it to consumers — has been in place since the end of Prohibition, when it was designed to rein in aggressive sales tactics and streamline regulation. The system is in sharp contrast to other consumer goods — Procter & Gamble, for instance, sells toothpaste and detergent straight to Walmart — and unique in the global beer industry.

Anheuser-Busch has more than 500 distributors across the country — five in the St. Louis area — nearly all of which are independent companies with an exclusive contract to sell A-B beer in a certain geographical area. It’s a lucrative franchise; distributors typically take about $4 per case, according to calculations by Beer Business Daily. And in recent years, the so-called “red network” of A-B wholesalers has won extra profits by shedding exclusivity agreements and carrying more craft beer, with higher margins and few extra costs.

But Anheuser-Busch InBev has started to push back, encouraging wholesalers to consolidate, urging tighter “alignment” with the brewery and blasting those who sell non-A-B products against A-B in neighboring markets.

“I’m loyal to my wholesalers,” A-B InBev North American president Luiz Edmond told the Wall Street Journal in March. “Why would I not expect the same loyalty to me?”

At stake is a lot of money.

Wall Street analysts say more efficient distribution could play a big role in A-B InBev’s target of $1 billion in U.S. cost savings. By buying out the middleman and self-distributing, the brewery could tap wholesaler profits estimated at about $1 a case, and centralize functions such as phone operations and truck maintenance.

These kind of acquisitions are legal in about 20 states, and A-B InBev already owns 14 distributorships — which it calls “branches” — including some in big, if not especially profitable, markets such as New York and Los Angeles. It has bought two just since December, with a third deal pending in Seattle.

A-B InBev is likely to keep buying wholesalers where it can, and to encourage consolidation where it can’t, wrote Tony Bucalo, an analyst with the Spanish bank Santander, in a research note last month. All in a bid to drive down costs.

“We estimate that ABI could hypothetically control nearly 50 percent of its distribution, compared to 8 percent today,” Bucalo wrote. “We believe it will continue to move in that direction.”

Even as the brewer has talked of consolidation, wholesaler groups are resisting. They warn of job cuts and short-term profit-taking. They argue that the big brewer could restrict sales of other brands at its branches, making it harder for craft beers and imports to find a market.

Those arguments have gained traction in state legislatures. In the past two years, laws banning self-distribution have been passed in Louisiana, Wisconsin, Nebraska and Illinois — where lawmakers acted after A-B InBev’s attempt to buy a majority stake in its Chicago distributorship prompted a federal lawsuit.

In Missouri, though, the idea has been a tougher sell. The big brewer’s clout in Jefferson City has long been the stuff of legend. Even today it wields considerable influence, employing nine lobbyists and doling out more than $340,000 in political donations statewide in 2011, according to the Missouri Ethics Commission.

Last year, a bill blocking brewery ownership of distributors went nowhere. So far this spring, it has received a hearing and the blessing of a committee in the Senate, but not in the House.

The bill’s sponsor, Sen. Mike Kehoe, R-Jefferson City, did not return calls seeking comment, nor did local Anheuser-Busch distributors, who have been silent on the matter. But Brian Gelner, vice president of Premium Beverage, a MillerCoors distributor in Springfield, and legislative chairman of the Missouri Beer Wholesalers Association, said he was hopeful that the bill would at least get to a full floor vote.

“The three-tier system has been a really good system,” Gelner said. “Anything that changes that by taking one tier out hurts the whole industry.”

A-B says it agrees on the value of three tiers, and insists it has no plans to buy Missouri wholesalers. But the brewery says it wants the option to do so if necessary, and is lobbying against the bill.

“We support keeping the existing system in place because it works and fosters competition,” said Mark Bordas, A-B’s regional vice president for state affairs, in a statement. “This system for many years has allowed for brewers to own a wholesaler in Missouri. If a wholesaler decides to sell, and if it makes sense for us to buy, our ability to own a wholesaler assures that our products are able to strongly compete.”

Some say this is a lot of fuss about very little.

Joe Thompson is president of Georgia-based Independent Beverage Group, which helps broker wholesaler acquisitions. When the owner of an A-B house wants to sell, he said, A-B is always a potential buyer — in the states where it’s allowed — but just one of many. And while the big brewer usually has right of first refusal in its network, distributors are free to take the best offer.

The real reason for all this push-back, Thompson said, is that many wholesalers don’t want to go up against the deep pockets of the brewery, which could easily undercut them on price.

“They’d rather compete against you or me than Anheuser-Busch,” said Thompson, who is representing Seattle-based K&L Distributors in its sale to A-B. “Fundamentally, it’s just that they don’t want a giant in their neighborhood.”

But others who have been watching this unfold say the distributors’ worries are well-founded.

From Chief Executive Carlos Brito on down, A-B InBev executives have made clear they have plans to save money on wholesaling, said John Conlin, a distribution consultant in Denver. And the more states where A-B owns wholesalers, the less leverage the stand-alone outfits will have.

Whatever happens in Jefferson City and elsewhere, Conlin said, the long-cozy relationship between the people who make Budweiser and the people who ship it is changing, perhaps for good.

“A-B has been flexing its muscles lately,” he said. “And there’s a lot of fear out there right now.”

Major Brands in deal to buy Miami distributorship from A-B

The debate has been simmering for about two years.

How the beer industry's post-Prohibition distribution system works in most places.

Point your smartphone's browser to stltoday.com/beerapp for our free Hip Hops beer app.

What's on tap next from A-B? Bud Light Lime-A-Rita

Lindsay Peel stocks up for an upcoming party with a case of Bud Light at Randall's Wines & Spirits on Thursday, May 3, 2012, in St. Louis. Photo by Laurie Skrivan, lskrivan@post-dispatch.com

Preparing for a party, Dr. Rob Bernardi of St. Louis loads liquor into his car outside Randall's Wines & Spirits in St. Louis on Thursday, May 3, 2012. Photo by Laurie Skrivan, lskrivan@post-dispatch.com