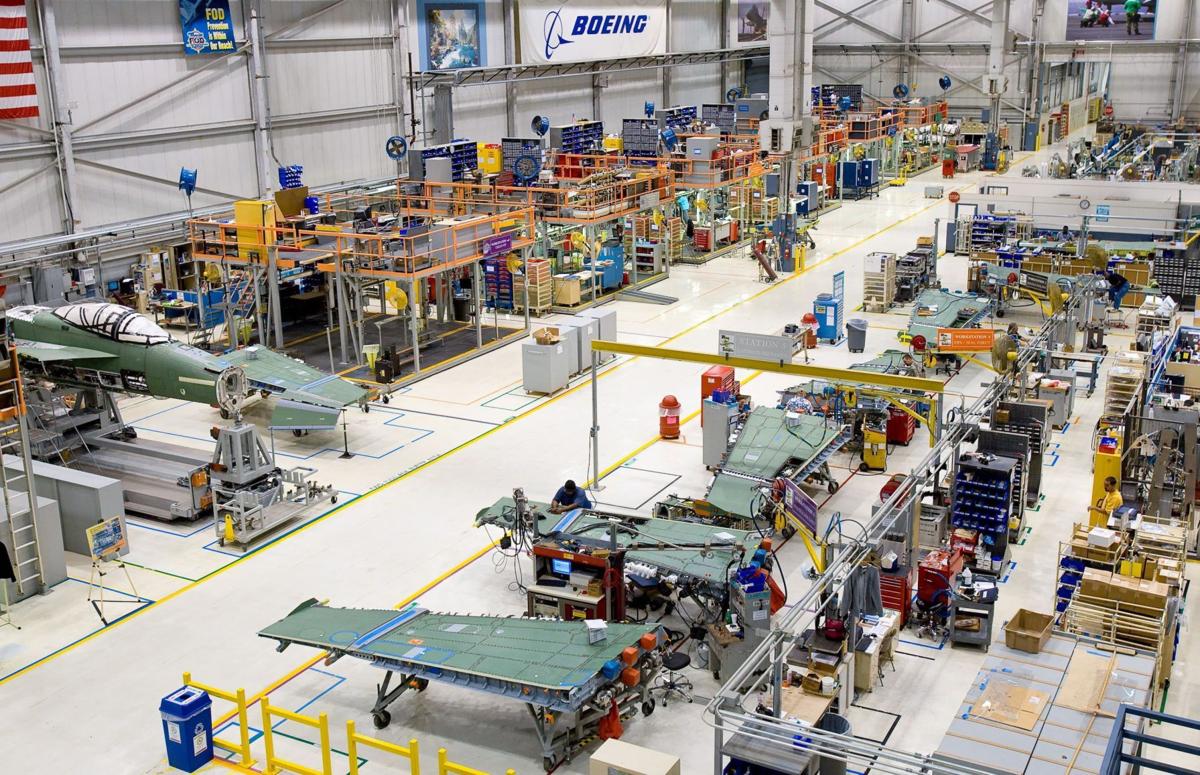 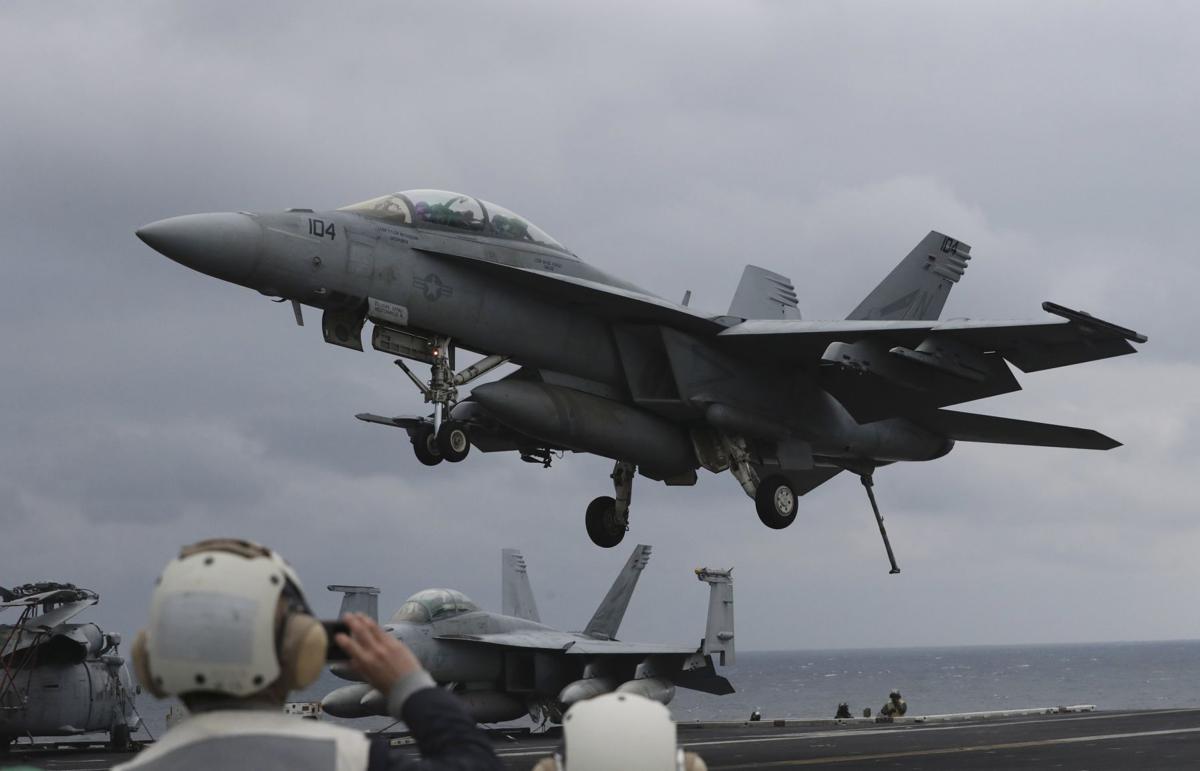 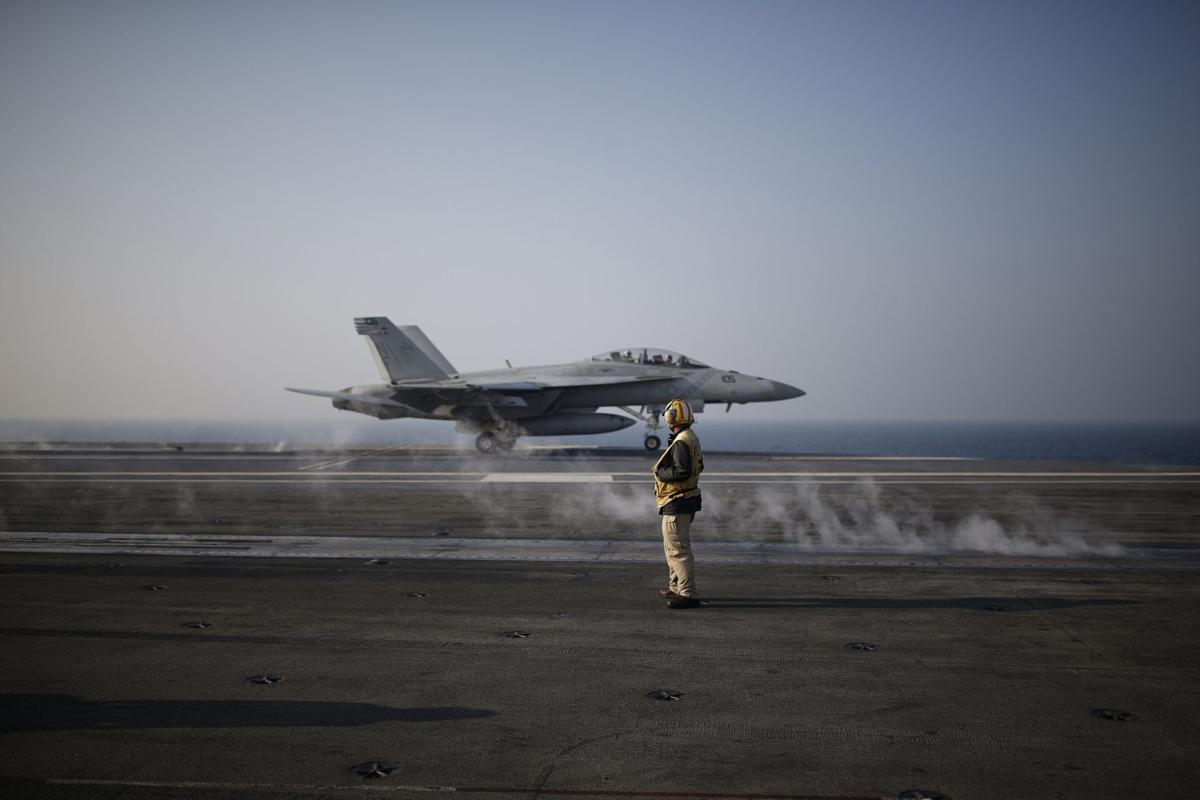 A U.S. Navy crew member looks at an F/A-18 Super Hornet fighter as it takes off from the USS Ronald Reagan, a Nimitz-class nuclear-powered super carrier, during a joint naval drill between South Korea and the U.S. in the West Sea, South Korea, Friday, Oct. 14, 2016. (Kim Hong-Ji/Pool Photo via AP)

The first F/A-18 Super Hornet delivered to Boeing for upgrades that will expand its flight capacity, as seen on April 5, 2018. Boeing recently won a contract to increase the Super Hornet's lifespan from 6,000 flight hours to 9,000 flight hours, a job that will extend the life of its north St. Louis County Super Hornet assembly lines as the Navy looks to upgrade hundreds of the fighters and could add a couple hundred jobs over several years. Photo by Jacob Barker 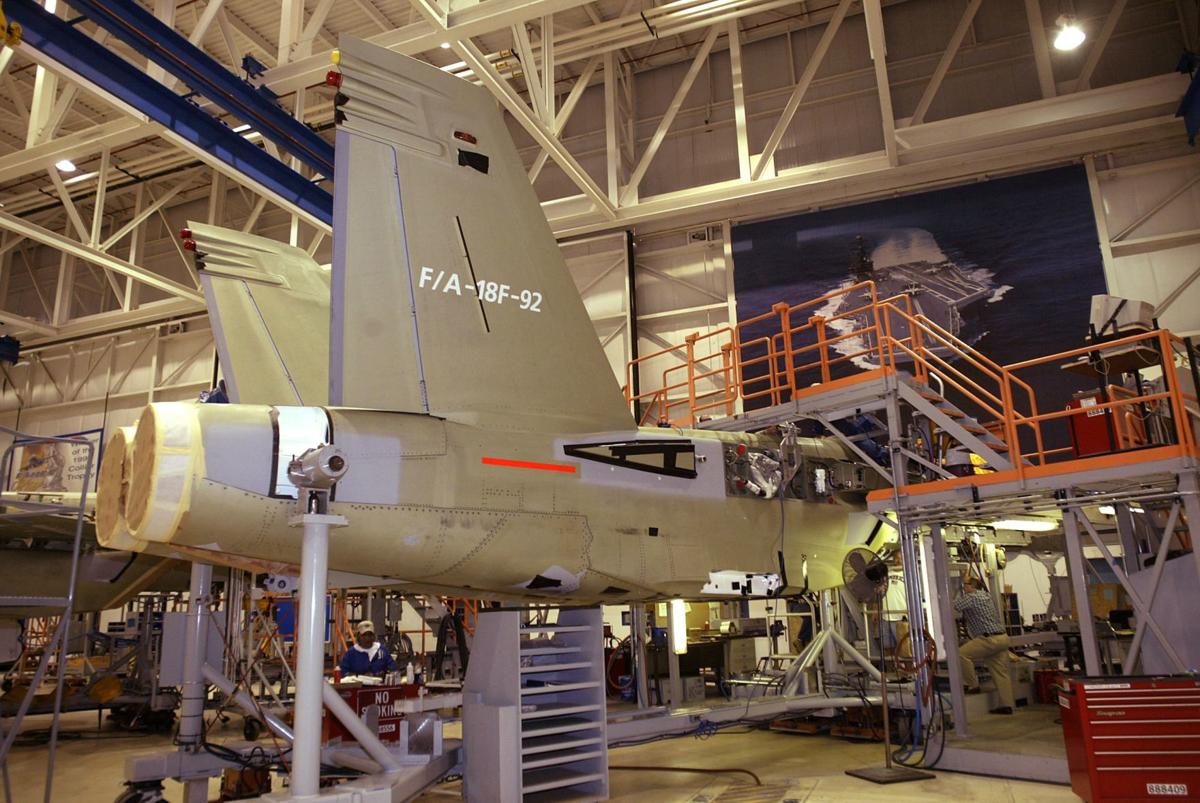 BERKELEY — One of the area’s most important assembly lines is back in a familiar pinch.

For the second time in less than a decade, the U.S. Navy is planning to stop buying new F/A-18 Super Hornets from Boeing at the end of September. If the plans stand, the last new model will roll off the line at Lambert Field in 2024 — not far off in an industry where each plane takes years to build — and leave at least hundreds of Boeing workers in limbo.

“Not only will a line shutdown have catastrophic effects on our national defense, but it will directly result in a significant loss of jobs in Missouri,” St. Louis County Executive Sam Page wrote in a letter to the state’s congressional delegation last month. “It is a decision that will directly impact nearly 16,000 employees in the St. Louis region and hundreds of suppliers here.”

Boeing issued a statement Wednesday saying the Navy needs new Super Hornets to deal with a fighter shortage and that the company plans to continue pressing its case.

“We look forward to working with our Navy customers and Congress to ensure this critical program is funded and delivered,” spokeswoman Deborah VanNierop said.

The Super Hornet is the Navy’s all-purpose workhorse, capable of hitting targets in the air, on land and at sea — and a big win in local aviation history.

Designed by St. Louis-based McDonnell Douglas, it won a high-stakes competition to fill a gap in the Navy’s fleet in the early 1990s, wowed in testing and entered full-rate production here the month after the merger with Boeing in 1997.

The Navy has since paid roughly $50 billion for nearly 700 Super Hornets, and alongside F-15s, Air Force training jets and commercial jet wing parts, the plane remains a big reason Boeing employs more than 15,000 people in Missouri — more than a tenth of its overall workforce and the most of any state outside its traditional home base of Washington state as of Jan. 1.

Selling new Super Hornets has gotten trickier in the past decade, though. Competitor Lockheed Martin launched a next-generation fighter jet, the F-35C, in the late 2000s, and by 2010, the Navy projected it would stop buying Super Hornets in 2013.

But the F-35 struggled repeatedly in testing, allowing Boeing to successfully pitch upgraded Super Hornets to Congress as a “no-drama” alternative, and win reprieve after reprieve:

When the Navy zeroed out its request in 2015, Congress asked for 12. The next year, the Obama administration asked for two; Congress added a dozen. In 2017, the Navy requested 14, Congress bought 24.

Then President Donald Trump beefed up the defense budget, ordering 78 Super Hornets in 2018, enough to keep the line going through 2024.

The next year, the Navy projected it would order more.

But last spring, the service reversed course, telling Congress it needed to pay for research and development on a future fighter.

Representatives on a House subcommittee, including Missouri’s Vicky Hartzler, R-Harrisonville, raised concerns in 2020 that the move would exacerbate a fighter shortage, a point the Navy acknowledges.

“In a world full of uncertainties, now is not the time to risk operating with a shortfall of Super Hornet aircraft in the fleet,” they wrote.

They also said that buying more planes would preserve an industrial base supporting more than 40,000 jobs across 44 states and keep the line open for foreign orders that could offer further work.

Missouri Sen. Roy Blunt, who sits on the Defense Appropriations Subcommittee and has been fighting for the Super Hornet for years, called the plane “an integral part of our national defense” and “the backbone of naval aviation.”

“Quite simply, our aircraft carriers cannot project power without Super Hornets on their decks,” he said in a statement.

The state’s junior senator, Josh Hawley, also a Republican, agreed. “I am concerned that the President’s budget request cuts funding for the Super Hornets,” he said in a statement.

(A spokesperson for Cori Bush, D-St. Louis, whose district includes Boeing’s facilities and who did not sign Wagner’s letter, did not respond to a request for comment for this story.)

Loren Thompson, a defense industry consultant and an executive at the Washington-based Lexington Institute, said the Navy may be banking on the Super Hornet’s friends to allow its negotiators to focus on other requests.

“I think the Navy is leaving out proposed items it thinks Congress will add back,” he said.

If Congress doesn’t, it’s not entirely clear what will happen next.

To be sure, Boeing will maintain a sizable presence here.

There is still work to do refurbishing and upgrading existing Super Hornets on lines at Lambert and in San Antonio, and spokeswoman VanNierop said that will last through the mid-2030s.

But to keep the new production line going, it would need foreign orders like a Kuwaiti buy the company is finishing up this year.

VanNierop noted that Germany recently announced its intention to buy Super Hornets and Growlers — modified Super Hornets built to jam enemy radar and communications — though she cautioned that’s not the same as a signed contract.

She said the company is competing for a contract with the Indian navy as well.

“In total, there are opportunities for more than 300 F/A-18 Super Hornets and EA-18G Growlers in the international market,” VanNierop said in an email.

If worst comes to worst, Boeing could slow down new production, as it has in the past, and divert workers to other lines.

“We’ll continue to try to extend as much as we can,” she said. “But I don’t know that we have anything we’re prepared to say on the record beyond that.”

Unveiled: How St. Louis' secret society is responding to the Ellie Kemper fiasco

A U.S. Navy crew member looks at an F/A-18 Super Hornet fighter as it takes off from the USS Ronald Reagan, a Nimitz-class nuclear-powered super carrier, during a joint naval drill between South Korea and the U.S. in the West Sea, South Korea, Friday, Oct. 14, 2016. (Kim Hong-Ji/Pool Photo via AP)

The first F/A-18 Super Hornet delivered to Boeing for upgrades that will expand its flight capacity, as seen on April 5, 2018. Boeing recently won a contract to increase the Super Hornet's lifespan from 6,000 flight hours to 9,000 flight hours, a job that will extend the life of its north St. Louis County Super Hornet assembly lines as the Navy looks to upgrade hundreds of the fighters and could add a couple hundred jobs over several years. Photo by Jacob Barker