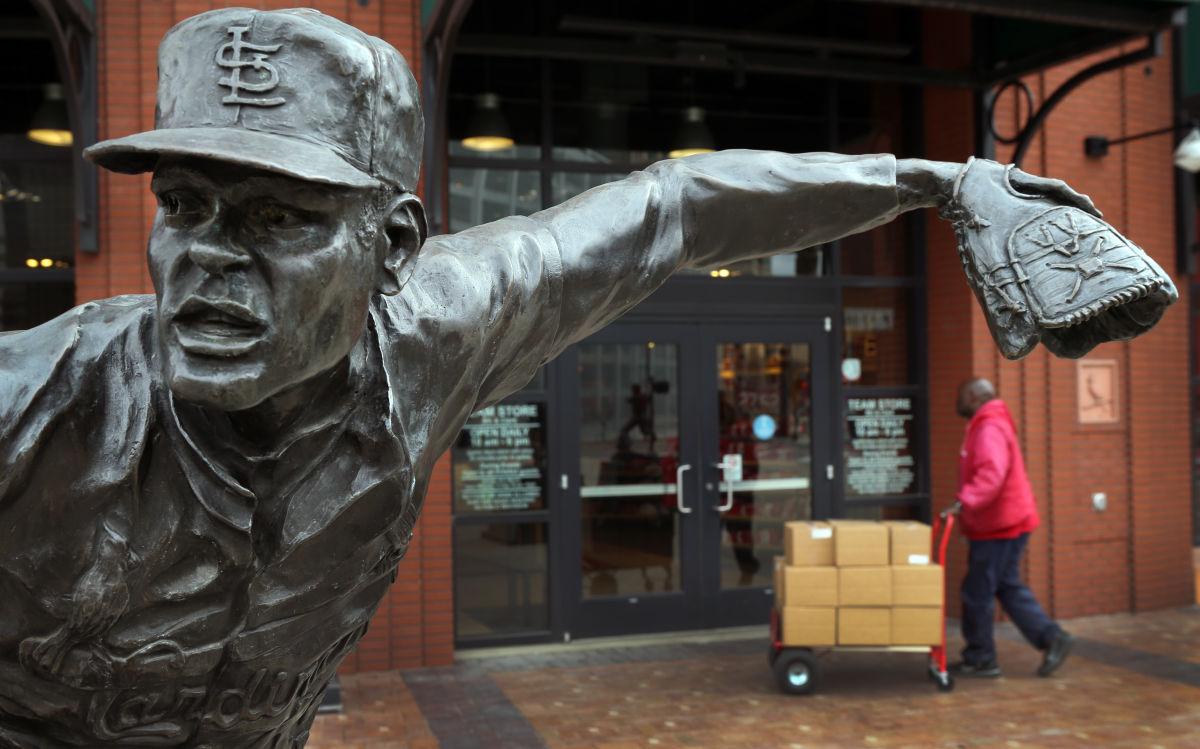 A statue of Cardinals Hall of Fame pitcher Bob Gibson stands in front of the team store as an off-season delivery is made at Busch Stadium on Tuesday, Feb. 24, 2014. A campaign is under way to make baseball's opening day a national holiday. Photo by Robert Cohen, rcohen@post-dispatch.com 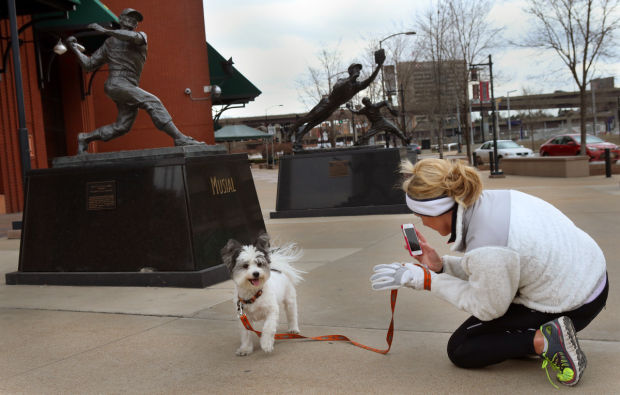 Laura Hettiger photographs her dog Charlie in front of a statue of Cardinals Hall of Fame member Stan Musial during her walk outside Busch Stadium on on Tuesday, Feb. 24, 2014. A campaign is under way to make baseball's opening day a national holiday. Hettiger wondered if cities outside St. Louis would care about such a holiday. "Why would Miami care if it's a national holiday," she said. Photo by Robert Cohen, rcohen@post-dispatch.com 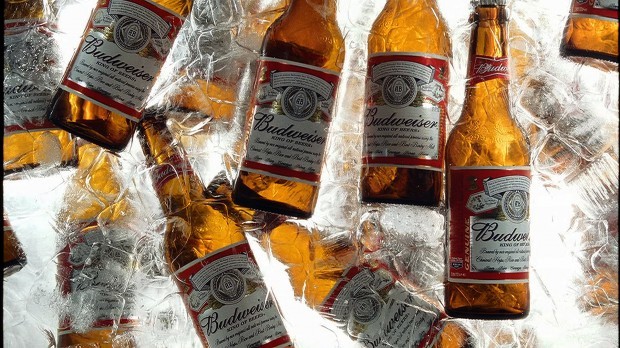 More than a million Americans already duck out of work or school early to attend baseball’s opening day games as a rite of spring, but Budweiser and Ozzie Smith want to take it step further and make it an official holiday.

Anheuser-Busch and former Cardinals shortstop and Hall of Famer Smith began a campaign Tuesday to support declaring opening day a national holiday by collecting 100,000 signatures in 30 days for a petition on the website WhiteHouse.gov.

“All we need is 100,000 signatures on the way to the White House,” Smith said in a video promoting the opening day holiday. The YouTube video was shot on the grounds of A-B’s St. Louis brewery. “Next stop, Washington, D.C.”

Other former major leaguers also lent their voices to the campaign with videos on Budweiser’s website, Budweiser.com/opening-day.html, including Eric Byrnes, Howard Johnson and Sean Casey.

The petition is a marketing-driven move by Anheuser-Busch, which is the official sponsor of MLB and most major league teams, according to Joe Goodman, associate professor of marketing at Washington University.

He acknowledged that the holiday “seems like a long shot.”

Still, the brewer stands to gain from the campaign’s exposure, whether or not an opening day holiday ever materializes, said Haim Mano, associate professor of marketing and department chairman at the University of Missouri-St. Louis.

“A-B has nothing to lose,” Mano said, adding if the campaign is successful, it undoubtedly would translate into more beer sales. “Baseball and beer go together very well, and they have a strong interest in making this a national holiday.”

Sales of Budweiser, the official beer of MLB, are growing globally, but sales for the third-best-selling beer brand in the U.S. have declined domestically since the 1980s.

The deadline for the signature drive is March 26. By Tuesday evening, the petition already had more than 16,000 signatures. Many of the signatures came from cities with major league teams, but not all. Identified only by their initials, those who signed the petition included people who live in cities without MLB teams, including Great Falls, Mont., and Las Vegas.

“It shows us that the fans do think of it as a national holiday,” Tim Brosnan, MLB’s executive vice president of business, said about the strong showing on the campaign’s first day. “Our fan base spans across the United States and across the globe, and the time was right to do this with a great partner, Budweiser, and Ozzie Smith.”

Getting the minimum number of signatures only means President Barack Obama’s administration will give an official response to the suggestion.

Many of the suggestions on the White House’s “We The People” petition website, which launched in 2011, are not adopted. Others do gain traction, however. A 2012 petition for the release of the White House’s home-brewed beer recipe prompted a response, including the full recipe for White House Honey Brown Ale.

To get the word out about the petition, Budweiser created digital ads to appear on websites, including ESPN.com and MLB.com.

MLB, which backs the petition, estimates more than a million fans attend opening day games in the U.S., but including those who take off work to watch the games on TV pushes the target audience much higher. An estimated 22.2 million Americans age 21 and older play hooky from work and other commitments on opening day to attend or watch the games, according to a survey conducted by research firm KRC Research.

Bars around Busch Stadium already are packed on Cardinals home games. Rebecca Keiffer, manager of the Flying Saucer Draught Emporium on Spruce Street, a block from home plate, said she supports making opening day a holiday but believes most St. Louisans already consider it one. “I’m pretty sure everyone takes that day off already,” she said.

Budweiser has been the official beer of Major League Baseball for more than three decades, and the league is one of the beer brand’s major marketing pushes.

As in previous years, Budweiser will feature the MLB and logos of 23 teams on 6 million cases of beer, beginning March 3.

“We feel that Budweiser is the only brand that can authentically move this forward,” said Budweiser director Tom Kraus. “MLB has certainly been a staple in American culture, much like Budweiser.”

Kraus said he has confidence in baseball fans submitting the 100,000 signatures by the March 26 deadline. “What the Oval Office will do is up to them,” he said.

The campaign follows one of A-B’s largest marketing pushes of the year, the Super Bowl, where the brewer’s Budweiser Clydesdales ad featuring a puppy won the top spot in USA Today’s Ad Meter survey.

“This latches right on to that and builds on that momentum,” Kraus said.

A-B is seeking to have Opening Day become a day of national observance, declared by presidential proclamation.

White House says federal holiday designations are up to Congress.

Budweiser to debut 'Rise as One' World Cup campaign

Busch Signature Copper Lager, hitting some stores this month, will be sold in 12 Midwestern states.

Brewer hopes to replicate its success with Chicago's Goose Island.

A statue of Cardinals Hall of Fame pitcher Bob Gibson stands in front of the team store as an off-season delivery is made at Busch Stadium on Tuesday, Feb. 24, 2014. A campaign is under way to make baseball's opening day a national holiday. Photo by Robert Cohen, rcohen@post-dispatch.com

Laura Hettiger photographs her dog Charlie in front of a statue of Cardinals Hall of Fame member Stan Musial during her walk outside Busch Stadium on on Tuesday, Feb. 24, 2014. A campaign is under way to make baseball's opening day a national holiday. Hettiger wondered if cities outside St. Louis would care about such a holiday. "Why would Miami care if it's a national holiday," she said. Photo by Robert Cohen, rcohen@post-dispatch.com