Chesterfield Mall is headed toward demolition. But here’s what’s inside it now
0 comments
Share this
{{featured_button_text}}

CHESTERFIELD — Like many business owners, Marshall Pan got hit with a lot last year. First it was the stay-at-home order. Then he reopened Arch Badminton Center at limited capacity, and his landlord in the warehouse off Long Road demanded full rent he couldn’t pay.

But then a friend told him to call the Chesterfield Mall — a Hail Mary — and for a fraction of his old rent, management told him he could set up his courts in the heart of the once-bustling complex. Now, walking through on a weekday, you can find a dozen or more people whipping birdies back and forth next to a hollowed-out Orange Julius.

“It’s got really high ceilings and not a lot of traffic, so it’s pretty ideal for us,” he said.

Malls across the country went into the pandemic in trouble, and for many, the virus only strengthened the case for demolition or redevelopment. In the meantime, owners are trying to fill space however they can. And in Chesterfield, where The Staenberg Group plans to replace the mall with a “downtown” for West County, cheap rent and ample available space have attracted eclectic tenants, from a coworking company to a shooting club.

Take the escalator up from badminton on a Friday night and you can find people racing remote-control cars at 60 mph in what used to be a Gap store.

Drew Ellis, who runs ProLevel RC, said he moved in 2½ years ago for the same reason Pan did: He needed the space of a big retailer to build the track, but without the rent a big retailer would pay.

And while the rent reflects the long decline in foot traffic, Ellis said it’s been better than he expected. Between the mall walkers and people wandering through after going to the AMC theater and the Cheesecake Factory, he’s gotten a decent amount of walk-ins and word-of-mouth advertising.

“They come in remembering what the mall used to be and just they kind of stumble into our place,” he said.

The mall’s new dynamic has also created space for nonprofit initiatives like a St. Luke’s vaccination clinic, a German shooting club and the Chesterfield History Museum, which just reopened Friday after closing for more than a year amid the pandemic.

Dee Ann Wilson-Wright, the president of the Heritage Foundation of Chesterfield, said her group had been looking for a place to set up exhibits for years when mall space opened up at a “very reasonable rate” following a foreclosure in 2016.

A short walk away, Ed Golterman is working on his own history exhibit highlighting a golden age of opera music in St. Louis. He said The Staenberg Group gifted him the window space of what used to be a Williams-Sonoma. He hopes to put on a presentation outside the store from 11 a.m. to 3 p.m. on June 24.

“We’ll hear the pickleballers, but that’s OK,” he said.

The mall still has a Macy’s. But the transition between bustling and demolished has also created opportunities for twists on old models.

The Stockton, which opened earlier this year, sells clothes just like the Francesca’s it replaced, but rather than boasting a national brand, it offers temporary space for St. Louis designers to sell their collections.

At Sanctioned Sneaker Collective next door, shoppers can buy shoes just like they could at Foot Locker — except the new offerings include collector’s items from the 1990s.

Tim Lowe, vice president of leasing and development at The Staenberg Group, said his firm plans to begin demolishing the mall in the next couple of years to clear the way for a mix of multifamily apartments, offices, retail, entertainment and green space they’re calling “Downtown Chesterfield.”

But even with those grand plans on the horizon, Lowe acknowledged the positives of the present.

“It’s not a solution, it’s an interim opportunity until we have a solution,” he said. “But it’s working. It’s keeping activity going, it’s keeping the lights on, and it’s allowing the mall to be useful.”

It still has its moments, too.

When Sherman Morgan stopped by Sanctioned on Friday afternoon, he was blown away by the collection of old-school kicks.

He left with a pair of green-and-red SB Dunks and promised to return.

“Chesterfield Mall is dead,” he said. “But that place is heat, man.”

Owner of West County Center, three other St. Louis-area malls says it will file for bankruptcy

The owner says customers can expect business as usual during the proceedings.

The great American mall is in trouble. So developers are rethinking it

That leaves mall owners, from national giants to local developers, reconsidering the great American mall, that staple of teenage freedom, creator of artificial ambiance, and provider of exercise to a legion of mall-walkers, countrywide. 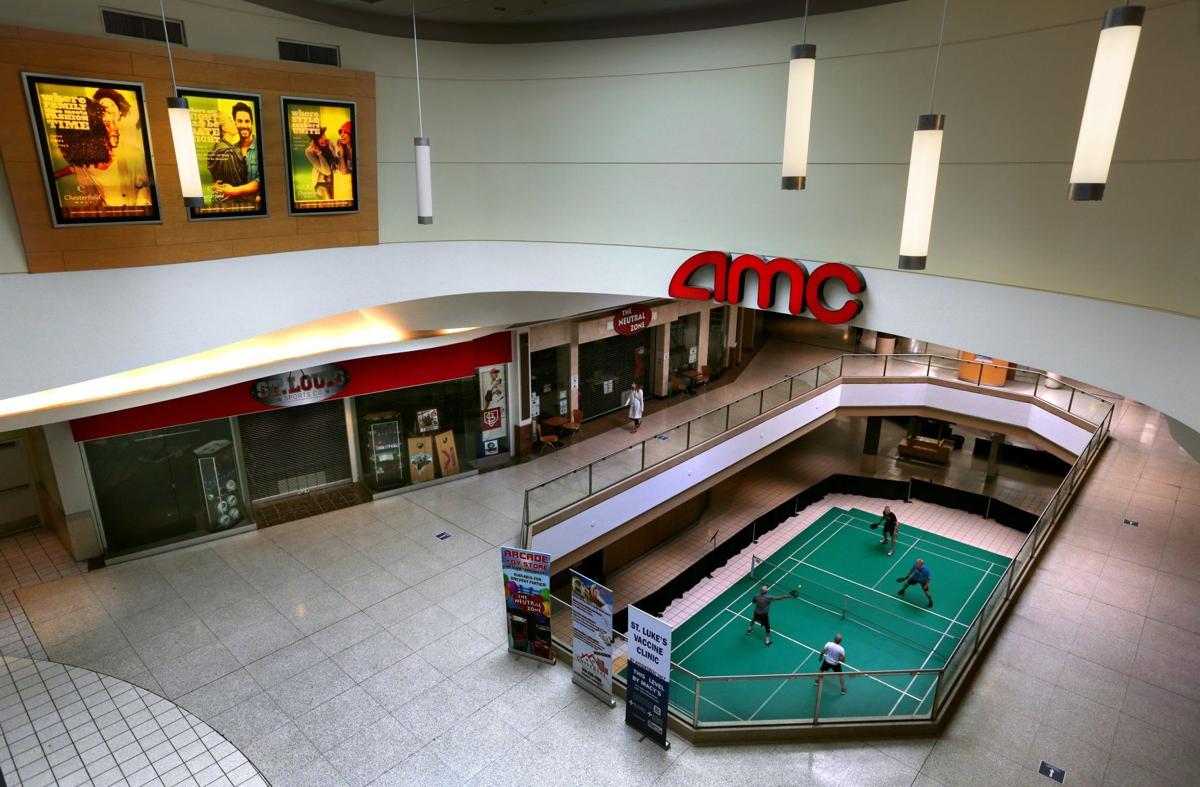 Men play a game of pickleball in the old food court area of the Chesterfield Mall on Sunday, May 16, 2021. The Arch Badminton Center has filled much of the first floor public spaces with badminton and pickleball courts, rented out by the hour on the company's app. Photo by Robert Cohen, rcohen@post-dispatch.com 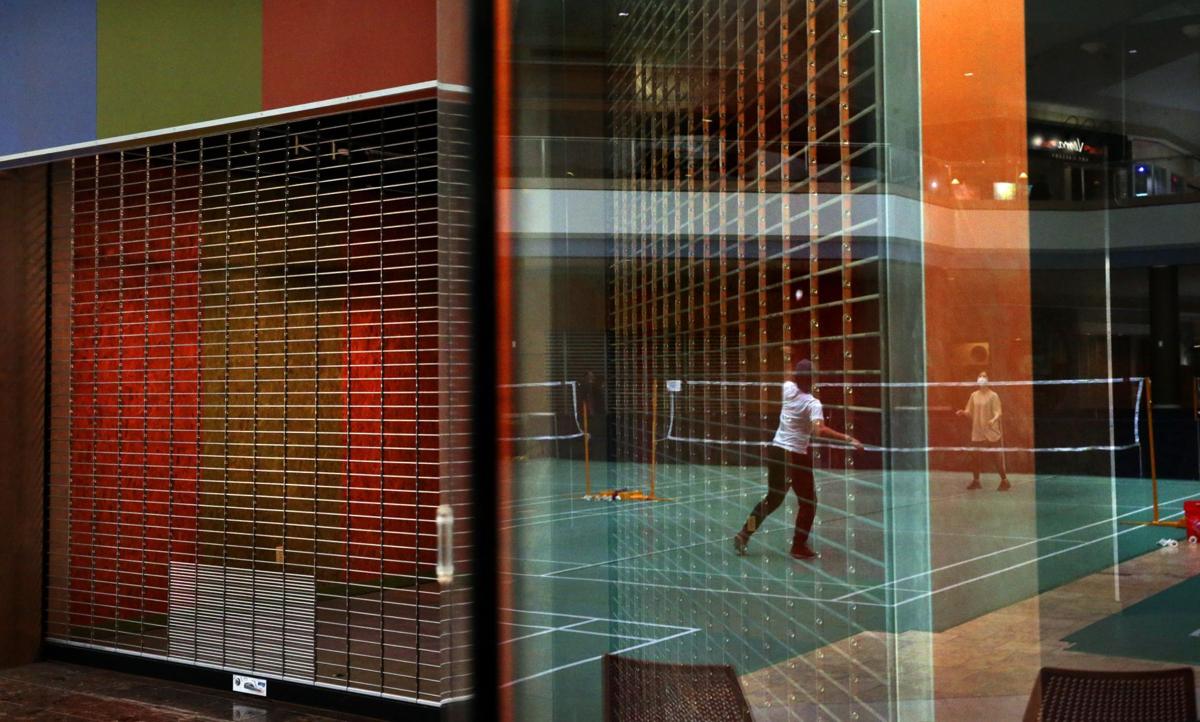 Badminton players are reflected in the windows of a shuttered store at the Chesterfield Mall on Sunday, May 16, 2021. The Arch Badminton Center has filled much of the first floor public spaces with badminton and pickleball courts, rented out by the hour on the company's app. Photo by Robert Cohen, rcohen@post-dispatch.com 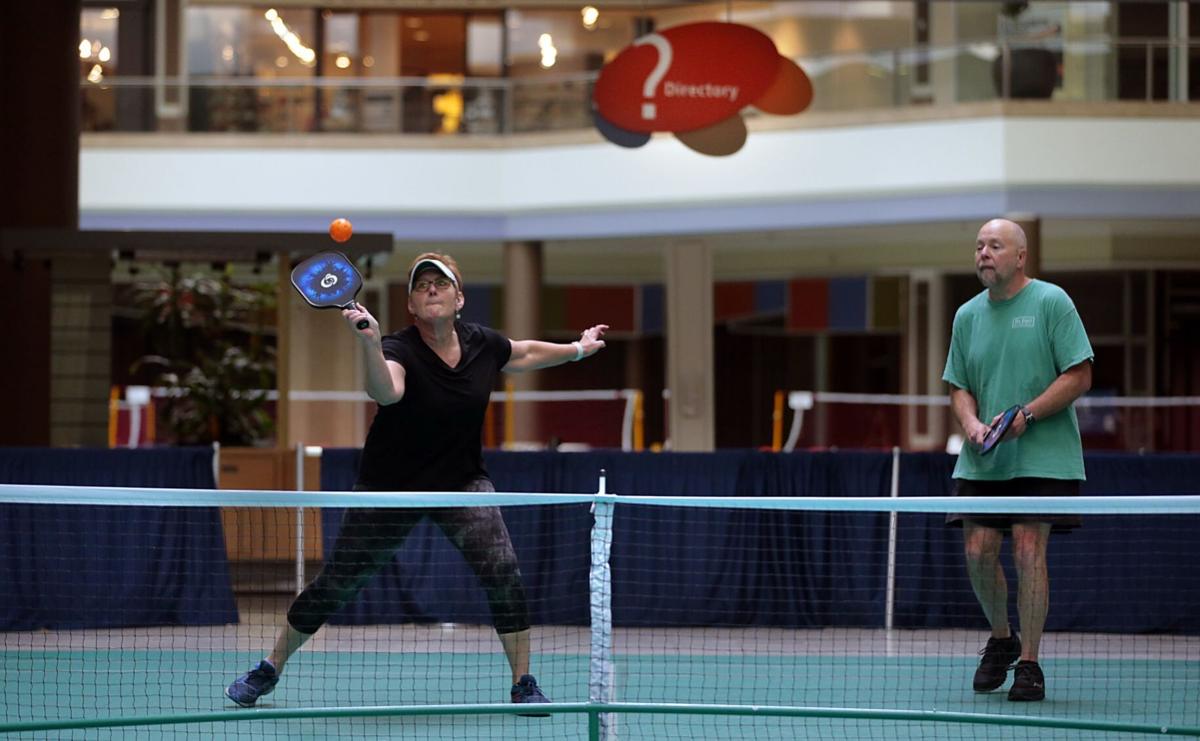 Tammy and Tom Burlis, both 56, of Chesterfield play pickleball doubles against their children Taylor and Nathan on the old food court area of the Chesterfield Mall on Saturday, May 15, 2021. The Arch Badminton Center has filled much of the first floor public spaces with badminton and pickleball courts, rented out by the hour on the company's app. Photo by Robert Cohen, rcohen@post-dispatch.com