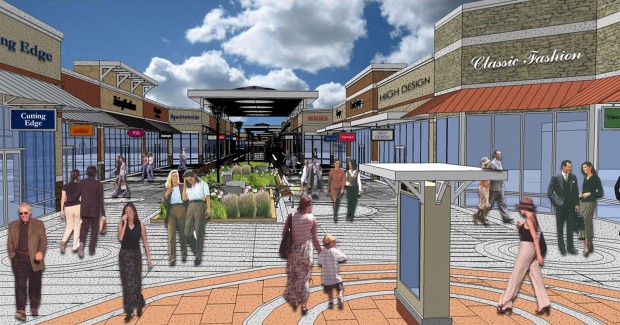 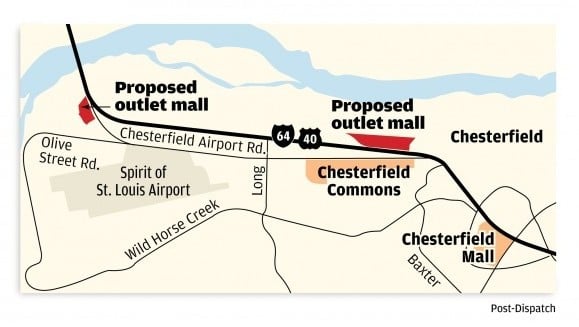 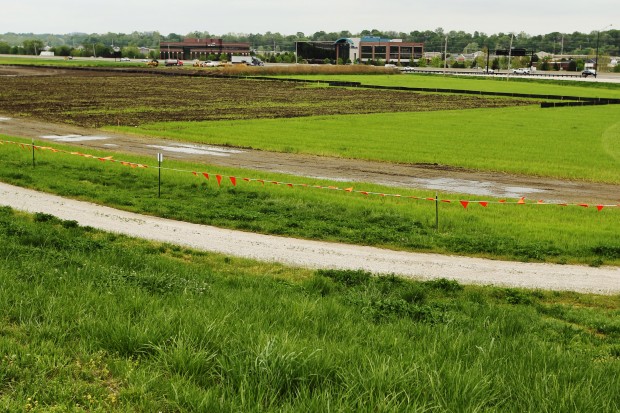 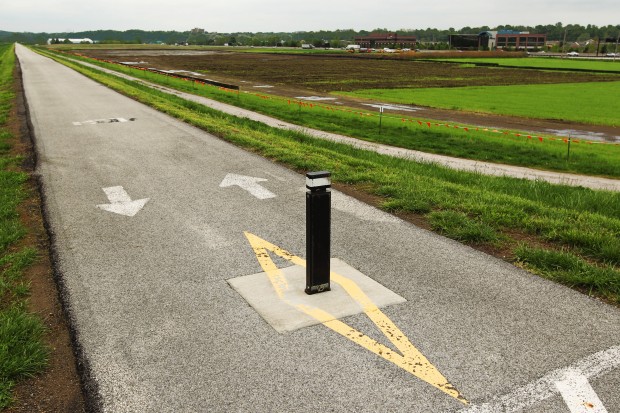 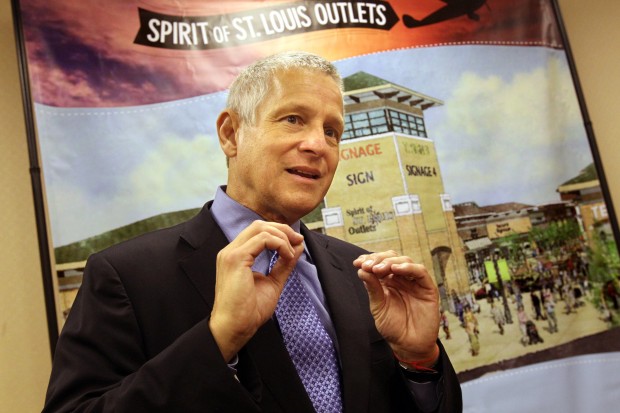 Stephen Coslik, chairman and CEO of Woodmont Outlets, answers questions about a proposed 555,000-square-foot outlet mall in the Chesterfield valley after a press conference at the Doubletree Hotel on Oct. 5, 2011. Christian Gooden cgooden@post-dispatch.com

Everyone seems to agree that only one outlet mall will be built in Chesterfield.

But exactly which one is anybody’s guess.

Two major developers have been angling for months to build an outlet mall along Highway 40 on sites less than five miles apart.

The fierce competition took on the feel of a tennis match last week, with one project breaking ground and the other announcing later the same day that Saks Fifth Avenue’s Off 5th has agreed to be an anchor store in its development.

“I think it’s kind of a coin flip at this point,” said Benjamin Yang, an analyst with Keefe, Bruyette & Woods. “They both are very adamant that their project is going to get built.”

Both say they plan to open in the fall of 2013. But if both centers actually opened, it would be a recipe for disaster, Yang said.

“They are close enough where the market can’t sustain both centers,” he said. “I think someone literally is going to blink at some point. We just don’t know who.”

The drive to build outlet malls has heated up in the last year or two as price-conscious consumers have flocked to outlet malls. And with more than enough traditional malls dotting the landscape, developers have homed in on the outlet mall sector as an area for expansion.

It is estimated that there are about 50 outlet malls in the planning and development stages.

“We haven’t seen this kind of head-to-head competition in some time,” said Yang. “There’s a race to get these projects built.”

Experts say the winner in Chesterfield will likely be the developer who attracts the most and best brand-name stores.

One of the contenders in this duel is Michigan-based Taubman Centers, which runs 27 high-end malls around the country, including two outlet malls. It is planning a 450,000 square-foot center called Taubman Prestige Outlets Chesterfield. The linear-shaped mall, with an interior-facing outdoor pedestrian walkway, would have 100 to 110 stores. On Tuesday, the company began moving dirt on the site, which is located across from Chesterfield Commons near Boone’s Crossing.

In the other corner is Indianapolis-based Simon Property Group, the owner of St. Louis Mills and the operator of more than 55 outlet malls in the U.S. under its “Premium Outlets” brand. It wants to a build a 350,000 square-foot open-air center with a racetrack-style layout on a site southeast of the Daniel Boone Bridge. Simon has a 60 percent interest in the St. Louis Premium Outlets project in a partnership with Woodmont Co. and EWB Development.

With two major players leading the charge on these projects, it will be tough for retailers to choose between the developments, said Linda Humphers, who tracks the outlet mall industry for the International Council of Shopping Centers.

It was surely a highly contentious decision for Saks to decide to go with Simon's project, she added. After all, Saks has a big presence in many of Taubman's malls.

"I'm sure they were sweating bullets on that one," she said. "It is often more political than trying to end the war in the Middle East."

She said retailers likely will weigh factors such as planned opening dates, the attributes of each physical site, their relationships with the developers and the potential for future projects.

So-called "site fights" to build outlet malls in a certain region are not uncommon these days. But experts say the situation in Chesterfield is somewhat unique in that the proposed locations are so close together and that neither of the developers has walked away yet.

Last year, two developers - Simon and Tanger Factory Outlets - who were vying to build outlet malls near each other in the Houston area eventually teamed up on the project.

Simon and Tanger also have broken ground on outlet centers in the Phoenix area, but experts note those projects are farther apart and could be more sustainable because they are in a larger market.

Of course, Chesterfield Mall doesn't exactly welcome the prospect of an outlet mall being built so close. A representative of the mall's owner, CBL & Associates, spoke out against one of the developments at a Chesterfield City Council meeting last fall, saying it was unprecedented to have an outlet mall so close to a traditional mall.

But the proponents of both projects counter that there would be little overlap in offerings, and that their malls would be more of a regional draw, attracting tourists and shoppers from the entire metro area and beyond.

"St. Louis is the only Midwest market that doesn't have a true outlet offering," Nicolai Schultz, Taubman's development manager, said while in town last week.

St. Louis Mills is more of a hybrid of traditional and outlet stores, and the outlet mall in Warrenton has fallen on hard times and is now mostly vacant.

Schultz emphasized that the Taubman project is farther along than its competitor. Taubman's site plans were approved by the city the last week of March, allowing the company to start working on the site.

In a news release, Taubman said it's had "overwhelmingly positive" response from tenants and has "firm commitments from most major retailers."

Schultz declined to name any of those retailers but said the company planned to do so after a groundbreaking ceremony in June.

Michele Rothstein, a Simon spokeswoman, said her company's landing of Saks' Off 5th as an anchor speaks for itself.

"We remain confident in our project and are proceeding accordingly," she wrote in an email.

Simon's site plans are on the agenda for tonight's planning commission meeting and then would have to be approved by the City Council at a later date, possibly in early May.

Neither developer has said how much their centers will cost to build or how they plan to finance them. But both parties are happy to discuss some of the finer details.

Taubman officials tout that their center will be dog-friendly, with bowls of water and doggie bags in the pedestrian walkway, And with a store's permission, dogs will be allowed inside many establishments.

But Karen Mac Donald, a Taubman spokeswoman, noted that the invitation doesn't extend to all pets - just dogs.

"We have to say 'dog-friendly,' because we've had people bring pot-bellied pigs," she said.

The store, opening later this week, expected to be a big attraction.

A proposed additional sales tax on shoppers at the planned St. Louis Premium Outlets mall isn't ringing up a sale with many Chesterfield residents.

Chesterfield OKs special tax district that would include outlet mall

Ann Taylor, Yankee Candle and Brooks Brothers are among the planned tenants.

One project begins site work while another announces an anchor store.

No one blinking yet in race for Chesterfield outlet mall

There’s still no sign of flinching in the game of chicken between two proposed outlet mall centers in Chesterfield.

WARRENTON • A billboard along Interstate 70 encourages drivers to stop in Warrenton and stay awhile.

On Thursday, more light was shed on one of those proposed projects.

Stephen Coslik, chairman and CEO of Woodmont Outlets, answers questions about a proposed 555,000-square-foot outlet mall in the Chesterfield valley after a press conference at the Doubletree Hotel on Oct. 5, 2011. Christian Gooden cgooden@post-dispatch.com