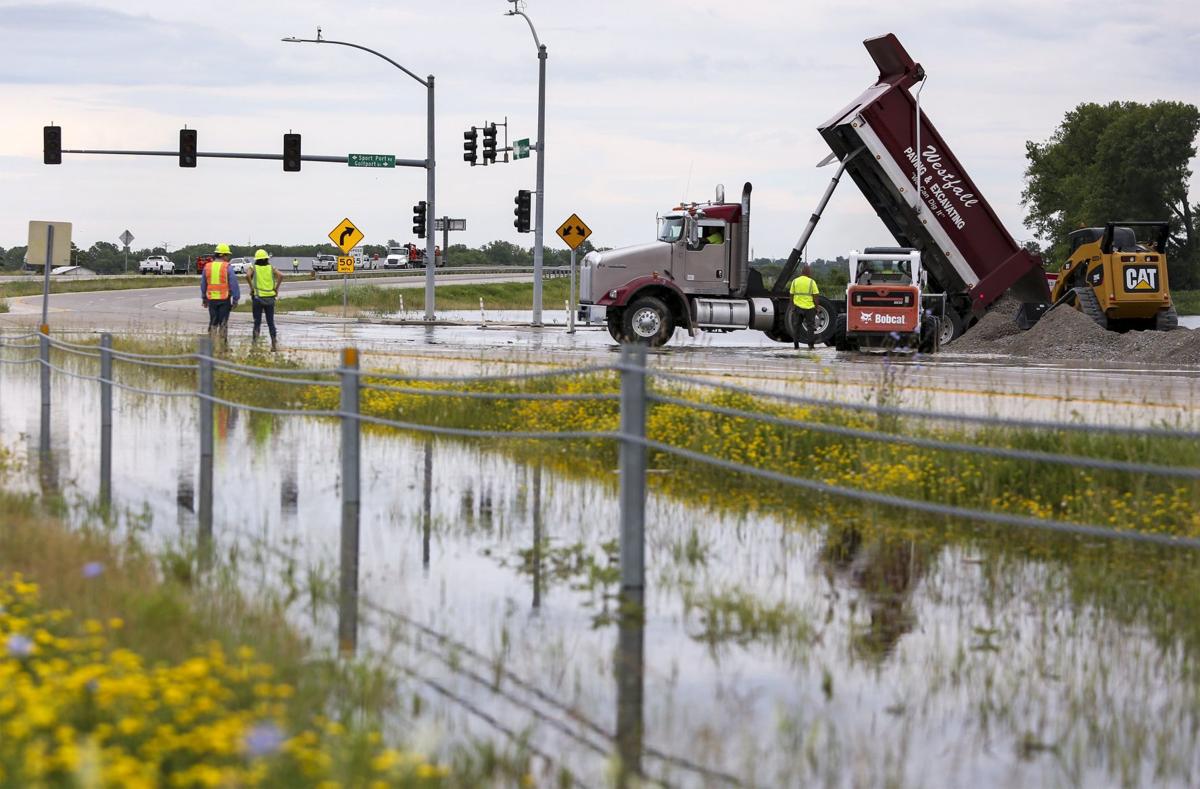 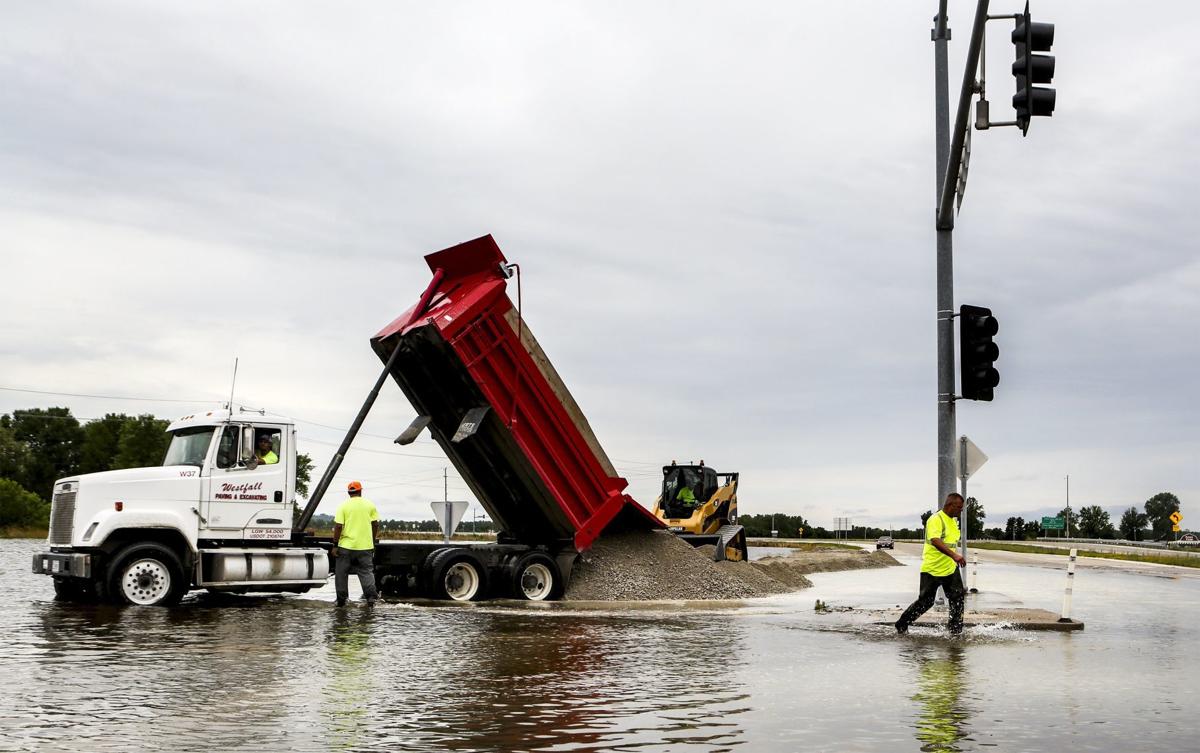 After a spring that brought some of the worst flooding since 1993, landowners in the Missouri River floodplain of Maryland Heights are fed up.

They aren't just blaming Mother Nature. They're directing their ire at the Howard Bend Levee District which, over 30 years, has collected tens of millions of dollars in special property taxes from them to finance the levees protecting 2,000 acres.

Those levees, built shortly after the flood of '93, have succeeded in keeping the river out. But this year, they also kept the rainwater and overflow from Creve Coeur Lake in.

Yet, as many of the 60-plus people who showed up to the levee district's annual property owner meeting Tuesday in Maryland Heights pointed out, there are still no pump stations to clear the water from the land used by farmers and businesses. That was painfully obvious as water lingered in the floodplain for weeks this spring.

Now that the floodwater has receded, a new problem is bubbling up: the district's finances. With a debt load of $24.5 million and higher payments coming due, the Howard Bend Levee District is considering a levee tax increase of 9% to keep up. To build those pump stations, it would take on still more debt.

On top of that, Howard Bend's largest taxpayer, Hollywood Casino, sued the levee district in March, asserting it had been charged too much in taxes. Hollywood is asking for a refund of its $468,000 in 2018 levee taxes, a sum that represents over 15% of the district's annual revenue in recent years.

Some are asking why the district hasn't paid down more of its debt — which bond ratings agencies have downgraded in recent years —  and why the fees for lawyers and engineers have been so high.

“You’ve had over $20 million invested in this district by the casino, and you’ve also got all the dues and taxes that we all have paid, and yet, we don’t have a single pumping station — not a one," said Albert Stix Jr., whose family is a co-owner of the Creve Coeur Airport in the levee district. "That’s where the frustration last night … that’s where it’s coming from. They feel somewhat defrauded.”

He and others are blaming the lawyer who they say controls the district: David Human of law firm Husch Blackwell. Husch, which has worked for many levee districts in the region, has billed Howard Bend around $4 million since 1999, according to invoices obtained by the Post-Dispatch and district financial disclosures.

Human's brother, Dan Human, was on the district's payroll as director for years, drawing fees of $60,000 a year for a total of at least $400,000. He stopped working for the district within the last year.

"They've promised us for over 12 years they were gonna put a pump on the back of our property," said Dale Boggs, who co-owns Golfport, a 56-acre driving range within the flood plain. "We've had trouble with them since Day One,  … They don't want to answer questions."

The city of Maryland Heights, long keen to see the roughly 2,000-acre area developed, is now pushing for a greater say in the levee district's operations as it gears up to release a development plan.

That plan is set to be released around November, laying out tens of millions in estimated infrastructure costs to develop the area. To finance those costs, the city has asked for a tax increment financing commission to be formed, whose members would be appointed by the city, St. Louis County and other taxing jurisdictions.

TIFs capture tax revenue generated by new development, and Maryland Heights Mayor Mike Moeller said that TIF would be the best way to finance the multimillion-dollar pumping station property owners want without asking them to pay more in levee taxes.

But Maryland Heights first wants to manage the district, a job Moeller says its staff can do for far less money than the district pays Human, its engineers and consultants. But he said the levee board hasn't considered the offer, which he suspects is Human's influence.

“Without more control over what the levee district does, it can’t happen," Moeller said of establishing a TIF and developing the area. "It’s time for professionals to manage (the district) and be more above board with everything … . You can’t have the one who’s getting the biggest paycheck ruling the roost. He’s going to protect that paycheck."

Maryland Heights, which already has one seat on the five-member levee district board, is conducting an audit of the district now using documents that the district "reluctantly" handed over, Moeller said. That complaint about transparency was echoed by other property owners Tuesday. The casino's lawsuit against the levee district also accuses it of improperly co-mingling bond proceeds and using casino payments for costs other than what Hollywood agreed to fund, an allegation the district denies.

For many property owners, the plan was always to sell to developers or have new development offset their levee taxes. The momentum behind developing the area — with one proposal apparently connected to NFL owner Stan Kroenke — fizzled three years ago. Maryland Heights officials said then they needed to get a better understanding of the pumping and stormwater infrastructure needs of the area, known as the Maryland Park Lake District

One of those complaining about the existing management of the district is developer Dan Devereux, a property owner long interested in preparing the area for development with infrastructure. He was the first to stand up at the meeting Tuesday and criticize the board for a "disconnect" with property owners and poor debt management.

Devereux was president of the district and on its payroll a decade ago when the district financed the installation of some of that infrastructure — a cost that has not yielded development, some reminded him Tuesday.

Stemme, the district president, said Devereux is still upset after being pushed out as president and wants to cast the levee district in a bad light. And, Stemme said, Devereux is close to Moeller. Devereux has donated some $8,500 to the municipal mayor since 2017.

Moeller said the city has always been pro-development in the area and the contributions have nothing to do with his concerns about the levee district management. Devereux called the mayor a "conscientious" public servant of a well-run city.

In any case, the levee is open to working with the city on a TIF as a possible way to alleviate their financial woes and pay for infrastructure, Stemme said. However, Stemme said the levee isn't keen on handing management over to Maryland Heights.

Nor is St. Louis County sure it wants to give too much control to the city. As the largest landowner because of Creve Coeur Lake Park, the county has one of the five levee board seats and substantial control over the board's makeup.

“The county supports smart development that protects Creve Coeur Lake Park," County Executive Sam Page's chief of staff Winston Calvert said in a statement. "We’ll continue taking a hard look at this situation, but we don’t plan to turn over control of anything that would put a county park at risk.”

For property owners facing higher taxes, some development may be the only way out from under the levee debt. Stix, whose family is involved with the airport, thinks residential development in the floodplain is "immoral" but isn't opposed to all development. After years of "serious financial mismanagement," he suspects many property owners may feel it's time to give Maryland Heights a shot at running things. Development, though, may "meet more opposition than they realize."

"There are a lot of people that do not want that valley to develop the way the mayor and everybody wants it to develop," Stix said.

The St. Louis County Executive explains his concerns about a Maryland Heights TIF proposal as city officials consider using other incentives to develop the area.

Trying to keep cities from poaching developments, the legislature amended the TIF law to give St. Louis County the power to appoint half of the members to a TIF commission.

The lawsuit is the latest bit of intrigue over the future of a vast, low-lying area along the Missouri River long eyed by developers and protected by a levee district that, some allege, is in financial trouble.

The financial uncertainty surrounding the levee district is the latest twist in the future of the low lying land along the Missouri River, eyed for years by developers.

Warren Stemme has had to deal with angry landowners, record flooding and financial problems at the troubled special taxing district that has charged millions to local taxpayers.

The St. Louis Metropolitan St. Louis Sewer District and Missouri American Water have joined the list of entities contesting the taxes the district charges them.

What to do with 1,800 acres in Maryland Heights? Panel looking for ideas

The committee will help determine how the Maryland Park Lake District should be developed.

The city will sketch out a more detailed area plan that it hopes will draw national interest to develop 1,800 acres of prime real estate.

The action is the latest from government agencies that say the Sny Island Levee and Drainage District has illegally high levees.