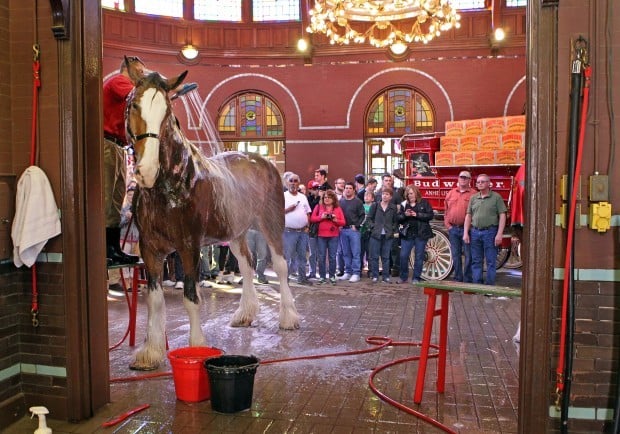 Clydesdale handler Travis Houser, left, washes Tim the Clydesdale as a tour group looks on at the Clydesdale stables at the Anheuser-Busch brewery in St. Louis on Friday, April 5, 2013. The full 8-horse Budweiser Clydesdale Hitch were preparing for an appearance at the St. Louis Tour Center later in the day. Photo by Stephanie S. Cordle, scordle@post-dispatch.com 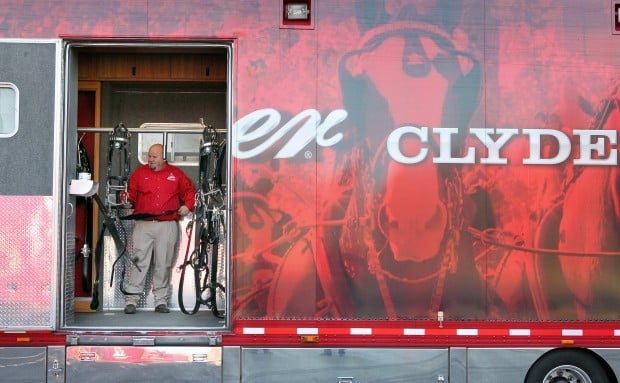 Clydesdale handler John Clark polishes harnesses in one of three 50-foot tractor-trailers used to transport the Clydesdales and all their gear, in preparation for an appearance by the full 8-horse Budweiser Clydesdale Hitch at the St. Louis Tour Center later in the day on Friday, April 5, 2013. Photo by Stephanie S. Cordle, scordle@post-dispatch.com 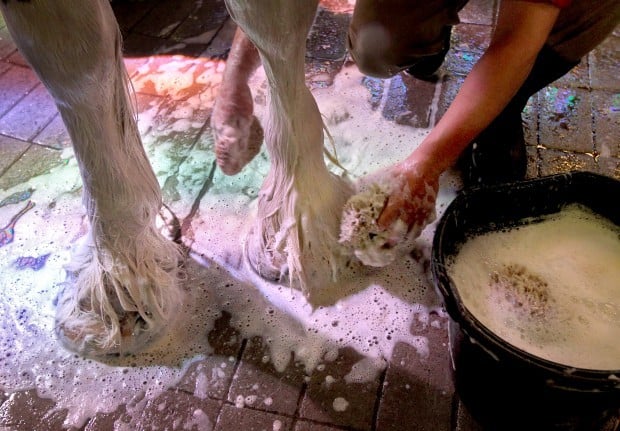 Clydesdale handler Travis Houser washes Tim the Clydesdale at the Clydesdale stables at the Anheuser-Busch brewery in St. Louis on Friday, April 5, 2013. The full 8-horse Budweiser Clydesdale Hitch were preparing for an appearance at the St. Louis Tour Center later in the day. Photo by Stephanie S. Cordle, scordle@post-dispatch.com 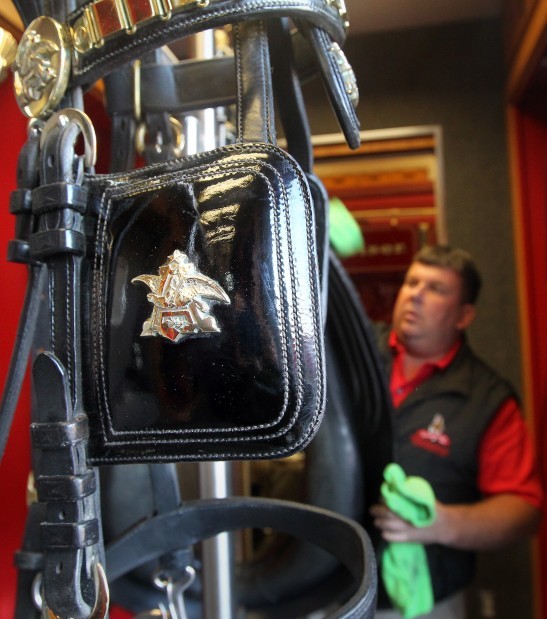 With a red barn and white fence serving as an idyllic backdrop, a baby Clydesdale nuzzled close to its mother last week, eliciting oohs and ahhs from visitors to A-B InBev’s Clydesdale breeding facility in mid-Missouri.

Monday was opening day for the fourth season of tours of the 300-plus-acre Warm Springs Ranch near Boonville, about 150 miles west of St. Louis. Eight hundred people made the trek to meet the newest Budweiser Clydesdales, a breed of draft horse that has been featured in A-B TV commercials since 1957.

The breeding facility and the stables at A-B’s North American headquarters in St. Louis both serve as places to care for the herd of as many as 200 horses — as well as opportunities to reinforce A-B’s branding message to customers, who are offered cold Budweisers at the end of tours.

Sunday, April 7, marks the 80th anniversary of the brewer’s association with the Clydesdales. In the spring of 1933, August Busch Jr. and Adolphus Busch III gave their father, August Busch Sr., a six-horse Clydesdale hitch as a gift to commemorate the repeal of Prohibition. Since then, Clydesdales have made thousands of appearances at parades, sporting events and other high-profile events, pulling a red wagon emblazoned with the Budweiser name.

Last week, the St. Louis team of Clydesdales returned from an appearance in Cincinnati to get ready for opening day at Busch Stadium on Monday, where a hitch of eight horses will be part of the Cardinals’ home opener.

A-B says the Clydesdales will play an important role in Budweiser branding for years to come, and as the brewer seeks to grow sales of Budweiser globally, it’s evaluating whether Clydesdales could play an even larger role in markets around the globe.

The Clydesdale breeding facility was moved from California to a former cattle farm in Missouri in late 2008 — after Belgium-based InBev announced its plans to purchase A-B — to be closer to the company’s North American headquarters. Last year, the ranch had 16,252 visitors, up 36 percent from 2011. Ninety-minute tours cost $10.

New for this year is a VIP tour for up to 16 guests that costs $500, and the brewer is considering opening up the property this year for corporate events and weddings.

Monday was the first day the ranch offered visitors the chance to meet Hope and Stan, two of more than 100 Clydesdales at Warm Springs.

Hope clearly was the star attraction. She’s the foal who was featured in A-B’s Super Bowl ad in February. The heart-tugging commercial featured a young foal’s relationship with her handler and was partially filmed at the ranch.

As visitors stopped to pet her, Hope poked her head through the fence to soak up the attention.

“I get chills,” Barbara Townley of Bozeman, Mont., said about meeting the Clydesdales. Townley was visiting Springfield, Mo., and drove several hours to visit the ranch after learning Hope was there. “It’s the best commercial I’ve ever seen.”

More than 60,000 suggestions were entered on social media sites including Twitter and Facebook to name the foal in the Super Bowl ad. A second newborn foal was also named as part of the promotion: Stan, after the late St. Louis Cardinals player Stan Musial.

The ad struck a nerve with viewers, and helped A-B gain the top spot in USA Today’s Ad Meter, a ranking of the Super Bowl ads. The win marked the 12th time A-B topped the publication’s Ad Meter in its 25 years, the most of any advertiser. Last week, a clip of the ad on YouTube had grown to nearly 12 million views.

“I love animals, and it brought tears to my eyes,” said Shari Stimetz of Kansas City, explaining her reaction to the ad, which prompted her first visit to Warm Springs. “I took off work to come down here.”

Breeding farm supervisor John Soto, who has worked for A-B for 33 years and served as inspiration for the handler in the Super Bowl ad, said the commercial had prompted an outpouring of interest in the farm and the horses.

“It definitely sparked interest from people and made them want to come out and see them,” he said.

A-B wants to parlay that emotional response to more beer sales. While Budweiser sales are growing globally, Budweiser sales in the U.S. have been falling since the 1980s as customers find an increasing number of beer options.

A-B has three teams of Clydesdales — based in St. Louis, Fort Collins, Colo., and Merrimack, N.H. — that travel in teams to appear in events across the country. A team of eight Clydesdales pulls a 7,600-pound wagon, and their visits have stretched to Canada, Mexico and Puerto Rico.

Beginning in April 2012, prospective wagon drivers began a new four-month drivers education program at A-B’s East Coast Clydesdale facility in New Hampshire. To make the cut, drivers must pass an obstacle course that features road and crowd hazards they could face at events.

Now A-B is considering extending the Clydesdales beyond North America as it seeks to grow Budweiser globally.

Here at home, A-B continues to look for new ways to leverage the Clydesdales’ popularity. In 2010, equipment was added to the wagons that allow Budweiser to be poured from a draft. A-B also started a new “home delivery” promotion on a trial basis last year that gave out Major League Baseball tickets to fans. As part of the expanded promotion this year, a hitch of Clydesdales are delivering Major League Baseball opening day tickets to fans in St. Louis, Los Angeles, Cincinnati and Tampa.

Walking guided tours of Warm Springs Ranch, located near Boonville, Mo., are offered April 1 through Oct. 31 by reservation only.

Tours are offered from 10 a.m. until 2 p.m. Monday-Sunday. The ranch is closed on Wednesday.

A credit card payment is required in order to secure your reservation.

Admission is $10. Children under age 2 are admitted free.

Clydesdales through the years

They'll be back at Busch Stadium today for the Cardinals' home opener, but look back on years of the majestic horses that are synonymous with …

Battle involves whether to weaken the state's 2010 anti-puppy-mill measure.

Budweiser sales internationally, particularly China, are on the rise.

Up close to the baby Clydesdales at Warm Springs Ranch

Change comes as Budweiser's share of the U.S. beer market has declined since hitting its peak in 1988.

It's the first time the Clydesdale sale has been held in St. Louis in its more than 30-year history.

Anheuser-Busch filmed its 30-second holiday ad at the St. Louis brewery this week

The Clydesdales celebrate their 80th anniversary

The Anheuser-Busch Clydesdales celebrate the 80th anniversary of their association with the famous beer label on April 7, 2013. On this day 80…

The Anheuser-Busch Clydesdales through the years

The Anheuser-Busch Clydesdales celebrate their 80th anniversary. Take a stroll through photos from 1933 to present day.

Clydesdale handler Travis Houser, left, washes Tim the Clydesdale as a tour group looks on at the Clydesdale stables at the Anheuser-Busch brewery in St. Louis on Friday, April 5, 2013. The full 8-horse Budweiser Clydesdale Hitch were preparing for an appearance at the St. Louis Tour Center later in the day. Photo by Stephanie S. Cordle, scordle@post-dispatch.com

Clydesdale handler John Clark polishes harnesses in one of three 50-foot tractor-trailers used to transport the Clydesdales and all their gear, in preparation for an appearance by the full 8-horse Budweiser Clydesdale Hitch at the St. Louis Tour Center later in the day on Friday, April 5, 2013. Photo by Stephanie S. Cordle, scordle@post-dispatch.com

Clydesdale handler Travis Houser washes Tim the Clydesdale at the Clydesdale stables at the Anheuser-Busch brewery in St. Louis on Friday, April 5, 2013. The full 8-horse Budweiser Clydesdale Hitch were preparing for an appearance at the St. Louis Tour Center later in the day. Photo by Stephanie S. Cordle, scordle@post-dispatch.com