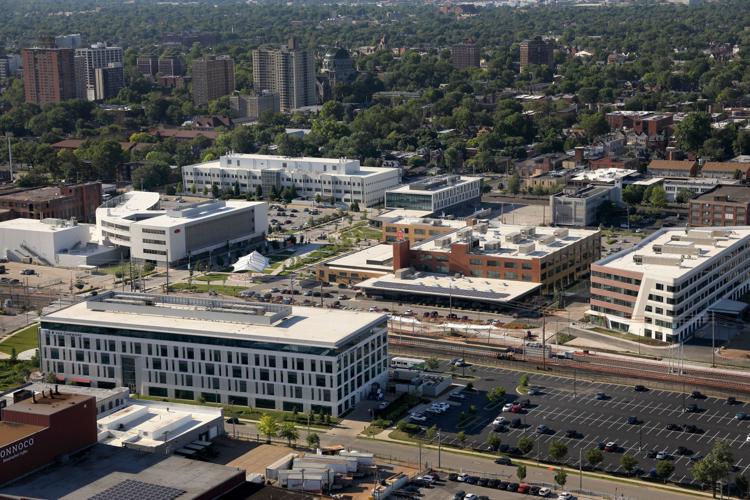 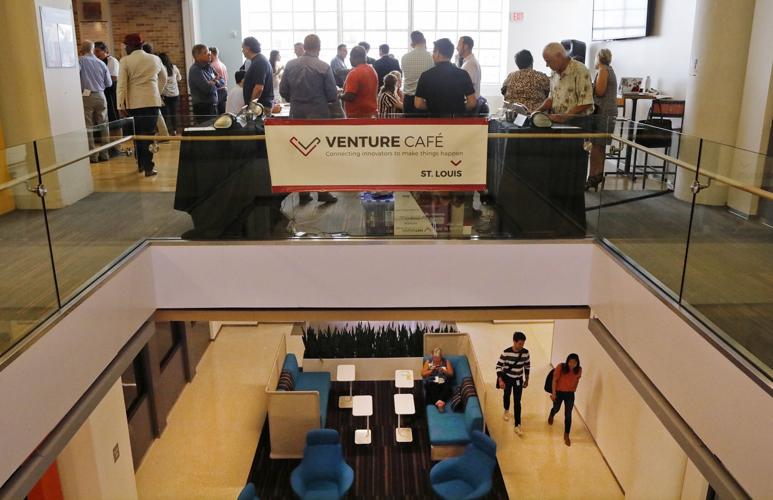 People mingle on Thursday, Aug. 29, at the Venture Cafe in the Cortex area of St. Louis, where innovators connect with people wanting to get involved with startup companies. Photo by J.B. Forbes, jforbes@post-dispatch.com

ST. LOUIS — In just under 20 years, the Cortex Innovation Community has transformed an aging industrial area into a humming tech district with daytime employment of almost 5,800 people and a payroll of $450 million at nearly 400 companies, according to a report released Thursday.

Cortex commissioned the report to measure its impact — the nonprofit redevelopment entity could finish building out its Central West End footprint over the next decade if its rapid progress continues.

The assessment is an exercise Cortex, founded in 2002 by Washington University, BJC Healthcare, the University of Missouri-St. Louis, Saint Louis University, and the Missouri Botanical Garden, hasn’t performed before, said CEO Dennis Lower.

The report, conducted by TEConomy Partners of Columbus, Ohio, makes the case that the public investment that created the district and led to $700 million in private development has been worth it — and the district will still need political support to advance projects on the drawing board.

From 2014 through 2018, the report says $40.7 million in net new taxes were generated within Cortex’s boundaries for the state and local jurisdictions. That includes about $7 million for St. Louis Public Schools in that time, primarily through personal property taxes and a special schools sales tax. The city of St. Louis received $8 million in net new taxes in that time.

Beyond a $29 million commitment made by its founders over a decade ago, St. Louis in 2013 approved up to $167.7 million in tax increment financing assistance that can be committed to private development and public infrastructure improvements. That financing comes from tax revenue generated by new development, employment and sales in the district, and Cortex must come back to city officials every time a new area is activated.

This summer, for instance, it needed an additional $5.2 million of TIF to finance a 920-space parking garage, Cortex’s contribution to an adjacent $115 million, 325,000 square-foot office and lab building being developed by Wexford Science and Technology and Ventas Inc. and expected to be complete by the summer of 2021.

“This is going to be an iconic building for St. Louis,” Lower said in June at a Board of Alderman hearing. “It’s going to make a statement.”

Thus far, $110.6 million of the $167.7 million TIF has been committed to real estate developments and public improvements, such as Cortex Commons and a 680-space parking garage that opened in May. Lower said Cortex is now offering less generous subsidies, but it still anticipates needing about $41 million for road, sewer and other public improvements as new developments come online.

Meanwhile, other projects are on the horizon. Washington University is considering a $300 million neuroscience building just west of the Crescent Building redevelopment that opened last year, now known as the BioSTL building. And Cortex is in discussions with a developer planning a 261-unit residential building. And a 129-room Aloft hotel on Duncan Avenue is expected to open this spring.

The development could be the most expensive in school history, surpassing the current redesign of the university’s Skinker Boulevard entrance, tagged at $240 million when announced more than three years ago.

As undeveloped real estate in Cortex dwindles, its staff is increasingly occupied with programming and events meant to stimulate creativity and community in the district.

“We’ve gotten to a critical mass,” Lower said. “So the game has changed.”

And the board is beginning to think beyond the boundaries of the district. They’re already in the midst of a national search to find a replacement for Lower, who has led Cortex as it bloomed over the last decade. He anticipates retiring once his successor is found in the coming months.

Lower will work full time through the end of the year.

“It’s likely that my successor will not be just focused on the Cortex boundaries alone,” Lower said. “It is likely there will be some additional opportunities that need attention.”

The project would finally add a residential component to the humming employment hub.

The 609,000-square-foot facility will be among the nation’s largest neuroscience research buildings, university officials said in their announcement on Friday

The building will house BioGenerator Labs and provide offices for medium-sized firms that need access to inexpensive space.

The head of the tech district also said Cortex is "working toward" a residential development within the boundaries.

People mingle on Thursday, Aug. 29, at the Venture Cafe in the Cortex area of St. Louis, where innovators connect with people wanting to get involved with startup companies. Photo by J.B. Forbes, jforbes@post-dispatch.com 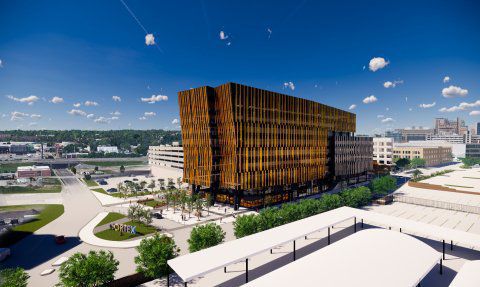 Ventas Inc., a Chicago-based real estate investment trust, is expanding its presence in St. Louis with a new $115 million development in the Cortex Innovation District at 4210 Duncan.