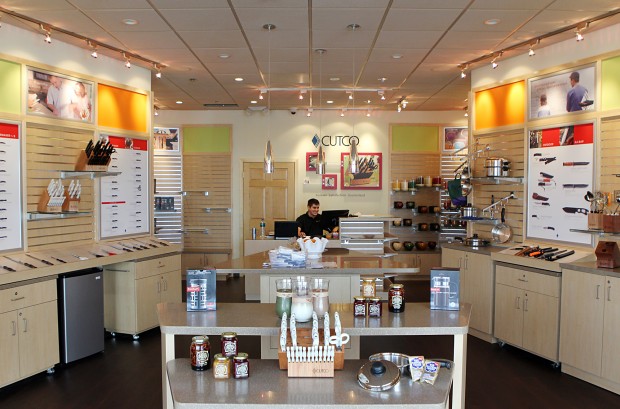 Interior view of the new Cutco Cutlery retail store on Wednesday, April 25, 2012, in Creve Coeur. The company is best known for selling its products door to door. Photo by Johnny Andrews, jandrews@post-dispatch.com 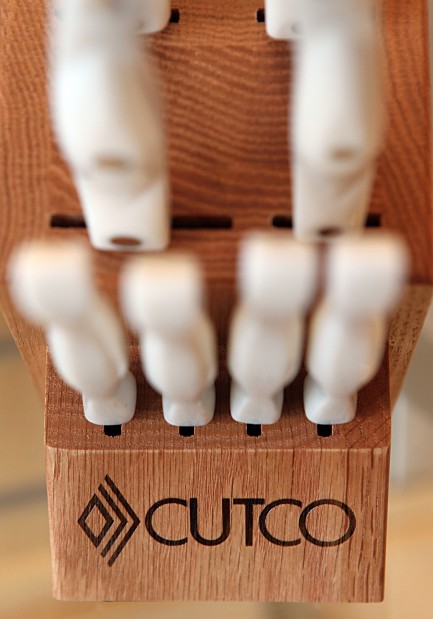 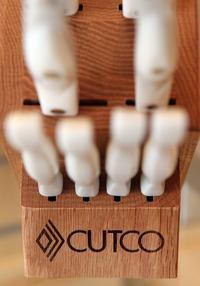 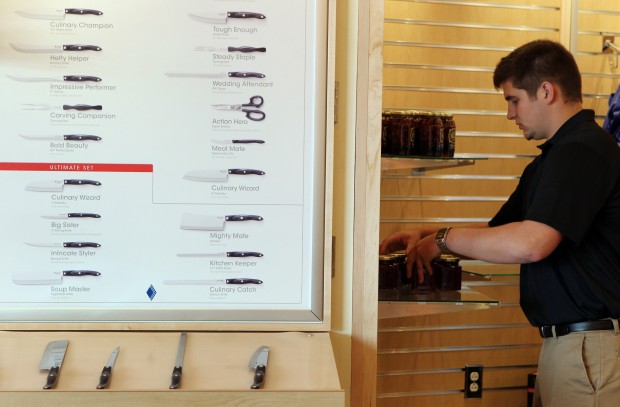 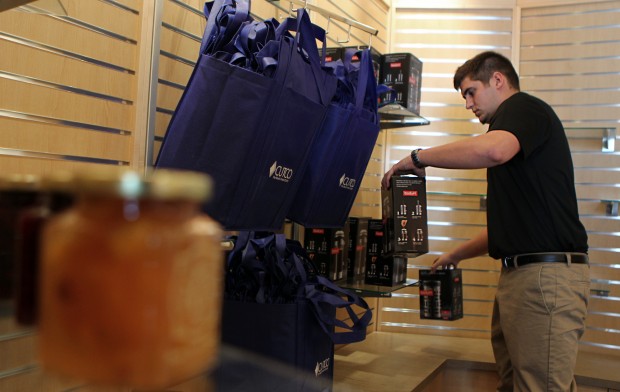 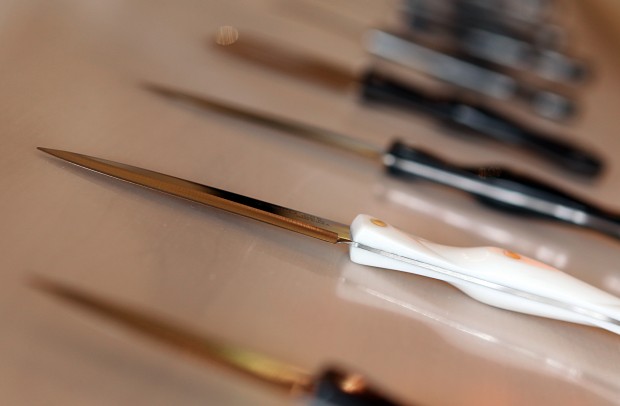 For most of its 63 years, Cutco Cutlery has sold its knives and kitchen tools through a network of sales representatives doing in-home visits where they demonstrate, among other things, how the company’s shears can cut through a penny.

But earlier this month, the largest kitchen cutlery manufacturer in North America took a step toward a gradual paradigm shift for the company: It opened a retail store in a shopping strip in Creve Coeur. It is the New York-based company’s fourth physical store — and could be followed by dozens more nationwide.

“It could be 50 — it could be 150,” said Tim McCreadie, a Cutco executive spearheading the store expansion. “We just don’t know at this point. We’re still in the learning stage. We’re new to retail.”

Company officials say they chose the St. Louis region for one of the first stores because it’s the company’s fifth most productive sales unit and has an estimated 130,000 customers in the area who have bought Cutco knives over the years.

The local office, by the way, also has some of the company’s top salespeople, including one man who holds the all-time record of more than $3 million in sales.

So why after so many years doing business the same way has Cutco finally decided to branch out into retail stores?

Well, most of the company’s sales force is made up of college students who sell the products during their summer breaks, McCreadie said. When those students graduate, customers can lose touch with the company.

“We have over 15 million Cutco customers in the U.S.,” he said recently while giving a tour of the store at 11641 Olive Boulevard. “So we had all of these Cutco customers that wanted their products serviced and even wanted to buy more products, but didn’t have a gateway to be able to do that.”

Still, the company has been testing the retail waters slowly, careful to make sure the stores don’t cannibalize sales of its representatives. But so far, McCreadie said, so good.

Sales have been up. And about 95 percent of people who visit the stores are already Cutco customers, he said. They either come in to get their knives sharpened or replaced as part of the company’s “forever” guarantee or stop by to find out about new products.

An added benefit is that the stores are a good way to build more excitement about the brand among sales representatives, some of whom may not be familiar with the company when they first start, he said.

Next on the horizon for Cutco is online sales. Other companies with similar business models such as Avon and Pampered Chef have made the leap. There’s no timetable for Cutco to do so, but McCreadie said the company is gearing up for the transition while also trying to ensure that the company doesn’t lose its reputation for great service.

W. Scott Downey, a Purdue University professor who has incorporated Cutco’s model into his sales classes for years, said the company has stayed true to its mission of making a direct connection with its customers. So it has been slow to go online where that personal touch can be lost, he said.

But he added that online is a natural progression for Cutco. After all, customers have been able to buy products over the phone through Cutco for some time now.

“They’ve been very careful, which I think is a tribute to them,” Downey said. “They’re a pretty conservative company. That personal connection is really important to them.”

Amy Robinson, spokeswoman for the trade group Direct Selling Association, said a number of direct selling companies have some sort of online component. But online sales haven’t replaced those companies’ reliance on sales representatives, she said.

“When the Internet was first becoming popular, a lot of people said, ‘Gosh, who needs direct sellers now?’” she said. “But that’s a wholly different sales model. The sales force is the backbone of these companies.”

And a lot of these products do better by demonstration — such as the Tupperware’s famous burping technique — which doesn’t resonate the same way when someone just sees it on a shelf, she said.

Over the years, Cutco and its sales division, Vector Marketing, have occasionally come under fire from college students who have complained about everything from recruiting tactics on college campuses to the $150 deposit sales reps had to put down to get a starter kit to use for demonstrations. (Cutco sets sell for between $399 and $1,999 with individual knives starting at $50.)

But a couple years ago, Cutco did away with the deposit fee. McCreadie said the company did so to remove a possible barrier of entry for college students.

As a result, the company has also stepped up its screening process to make sure recruits are serious about selling the products since they’re now giving the kits on loan for free, said Justin Donald, a Cutco division manager.

With jobs hard to come by these days, Donald said he is getting more inquiries than ever. The local office has between 30 and 50 active sales reps throughout the year. But that sales force swells to more than 100 during the summer when college students join the ranks, Donald said.

Of course, selling is not everyone, which some students quickly find out. That’s one of the reasons Purdue’s Downey has students sell Cutco products as part of his class to show them what it’s really like to work in sales.

“In many ways, it’s an emotional business,” he said. “It’s difficult for customers to tell you no, so we want students to have that experience.”

In search of answers — and the dead — St. Louisans meet with mediums

TV shows have moved the psychic practice into the mainstream.

Interior view of the new Cutco Cutlery retail store on Wednesday, April 25, 2012, in Creve Coeur. The company is best known for selling its products door to door. Photo by Johnny Andrews, jandrews@post-dispatch.com